The Texas Senate on Monday released its first draft of a new map for the State Board of Education's 15 districts. It attempts to reinforce a GOP majority for the entity that determines what millions of public school students in the state are taught in classrooms.

The map is likely to change as it makes its way through the legislative process, which began formally Monday as the Legislature kicked off its third special session of the year. Lawmakers have been tasked with redrawing district maps for the board, the state House and Senate as well as the state’s congressional seats.

They will craft those maps using the latest census data, which showed that people of color fueled 95% of the state’s population growth over the past decade. The proposals will have to be approved by both chambers and signed by Gov. Greg Abbott. 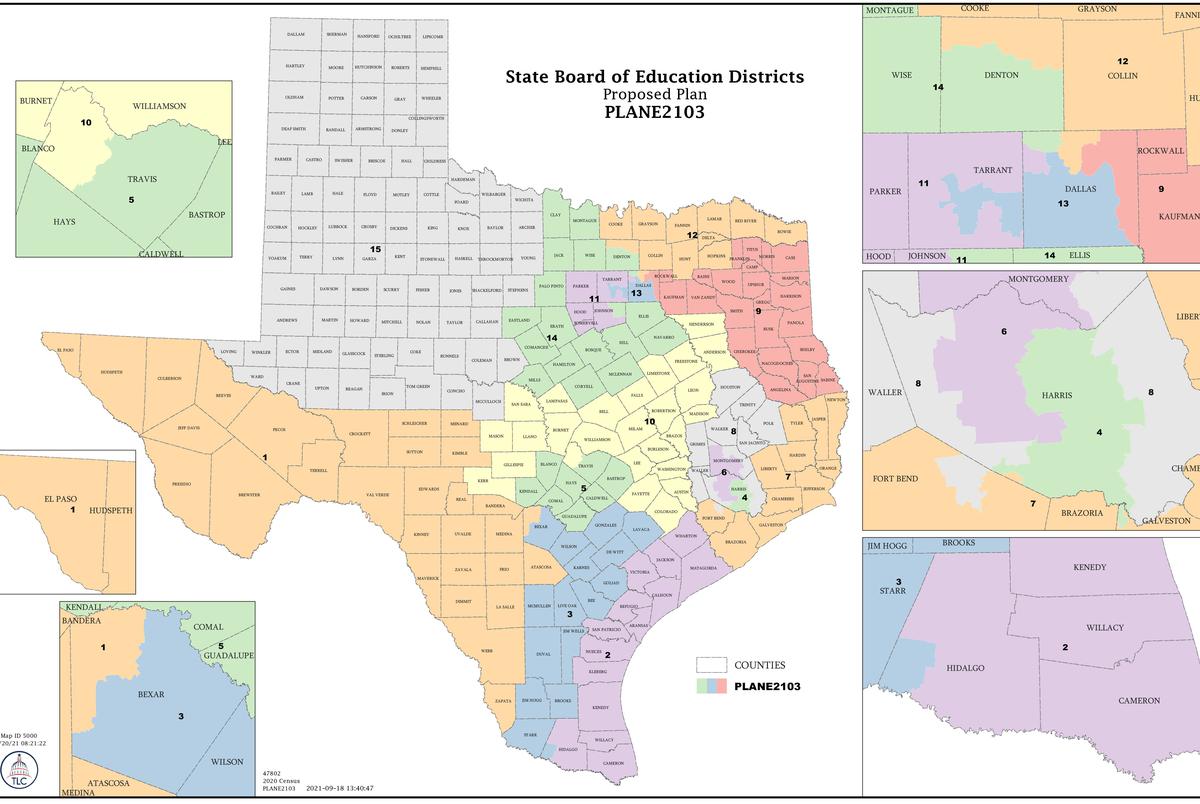 The Texas Legislature’s first draft of a new redistricted map for the 15-member State Board of Education. Credit: Texas Legislative Council

The Senate’s proposal did not make any changes to the racial breakdowns of the 15 districts. Hispanic residents make up a majority in three of the districts, 10 districts are majority white and two have no majority.

Nine Republicans and six Democrats currently make up the State Board of Education. During the 2020 general election, seven of those 15 districts went to President Joe Biden — though, under the Senate’s proposed map, only five would favor Biden and one would be considered a toss-up seat.

District 6, held by Republican Will Hickman of Houston, and District 12, held by Republican Pam Little of Fairview, both went to Biden narrowly in the 2020 election. Those two districts would be retooled under the Senate’s draft to include more Donald Trump voters and give Republicans a more comfortable majority. District 2, which favored the Republican former president in 2020 by a few percentage points, would be evenly split among Biden and Trump voters. That district is currently held by Ruben Cortez Jr., a Brownsville Democrat.

Hickman said Monday that he did not have "any major objections" to the Senate's proposal so far, noting that he would lose some of the smaller swaths of independent school districts he represents and pick up larger pieces of others. The move, he said, would help consolidate some of the ISDs and help streamline communications between superintendents and board members.

"It makes more sense for a superintendent to have a single SBOE member they can talk to," he told The Texas Tribune later Monday. "Some of these districts have two or three SBOE members."

The Senate's proposed map would also force two incumbents — Houston Democrat Lawrence Allen and Friendswood Republican Matt Robinson— to face off for District 4, though Robinson said Tuesday morning he does not plan to seek reelection.

The current map for District 4, which is held by Allen, includes parts of Fort Bend and Harris counties though it would be reworked to instead contain parts of Harris and Galveston counties. But the voters in the proposed new District 4 overwhelmingly supported Biden in the 2020 election, seemingly giving an advantage to Allen. The proposal would leave District 7, which is currently held by Robinson, as an open seat that would lean Republican, as 57% of its voters supported Trump.

Later Monday, Robinson told the Tribune he thought that he had been moved to a less favorable district because of his record as a board member against charter schools in the state.

"I think that's pretty clear [with] this redistricting map," he said. "It looks like the Republicans in the Senate had concerns about my charter votes, and that's why they basically carved me out — so that I either won't run again or won't win, that I won't be back."

Robinson had tweeted Aug. 13 that he was not running for another term, though he had since deleted his Twitter account.

The State Board of Education, which is responsible for adopting textbooks and changing curriculum standards, has made national headlines in recent years over board meeting debates over controversial evolution standards and sex education policies, among other things.

The special session, which can last up to 30 days, is expected to focus largely on redrawing the state’s political maps, along with a host of other issues set by Abbott. Since the GOP holds majorities in both chambers, the redistricting process will be in the hands of Republicans, who will work to best position their party for the next decade.

On Saturday, the Senate released the first draft of its own redistricted member map, which also shores up Republican seats.

Correction, Sept. 20, 2021: Due to an editing error, a previous version of this story misspelled the name of a State Board of Education member. His name is Will Hickman, not Will Hickan.