The Texas Senate kicked off the decennial redistricting process Saturday, releasing the first draft of its own members’ district maps, which shore up the strength of the Republican majority.

On Monday, the Texas Legislature meets for a 30-day special session dedicated to redrawing political maps based on the latest census data, which showed people of color fueled 95% of Texas’ population growth over the past decade.

The Legislature is tasked with setting new boundaries for state House and Senate districts in addition to redrawing new district maps for the state’s congressional seats and for the State Board of Education. Republicans hold majorities in both chambers and will have every advantage as they use the process to position their party for the next decade as the state population becomes younger and more diverse.

The 31-member Senate is made up of 13 Democrats and 18 Republicans. However, in 2020, two of those Republicans — Sens. Joan Huffman of Houston and Angela Paxton of McKinney — saw their districts narrowly vote for Joe Biden over Donald Trump in the presidential election, signaling competitive reelection paths.

But the first draft of the map authored by Huffman, a Houston Republican who is the Senate redistricting chair, redraws both of those Republican districts to include comfortable majorities of voters who supported Trump, which would help secure the incumbents’ seats. In total, the new map includes 19 Senate districts where Trump voters outnumbered Biden voters — up from 16 districts currently. 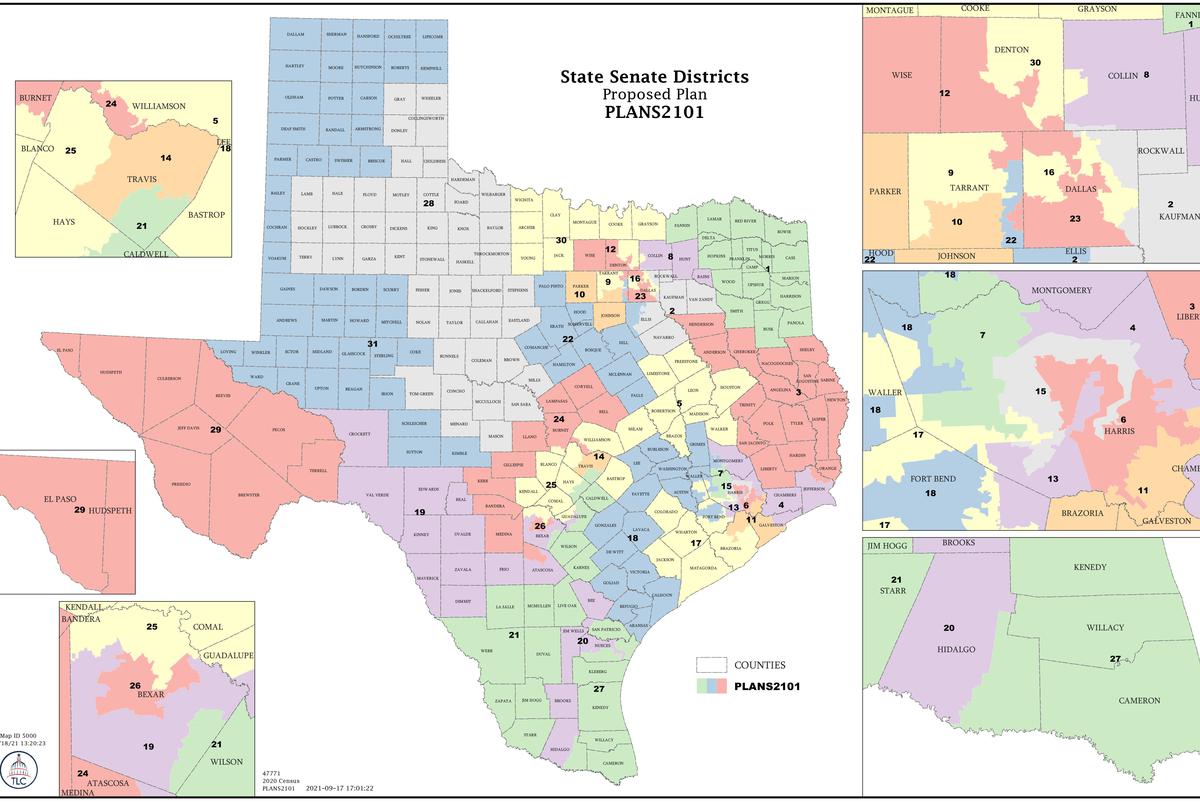 Senate District 13, represented by Democrat Borris Miles of Houston, however, would only have a 50.2% majority of Black residents. That would be a drop from the map’s current 52.3% Black population.

The racial breakdown of districts is hard to reconcile with U.S. census data that showed 95% of the population growth in Texas was made up of people of color, with Hispanics seeing the largest growth. The percentage of Hispanic Texans now nearly matches the percentage of white Texans.

All on The Line, an anti-gerrymandering group tied to former U.S. Attorney General Eric Holder, knocked the map for failing to reflect the population growth of people of color, particularly Hispanics.

“This map has clear signs of gerrymandering and is a complete disservice to the people of Texas. It ignores community input and the census data which shows Texas’ population growth came from people of color and was centered in urban and suburban communities,” Genevieve Van Cleve, the group’s state director, said in a statement. “We must hold Republican legislators accountable and ensure they hold additional hearings that allow public input, and create a new Senate map that reflects community input and the census data.”

State Sen. Beverly Powell, D-Burleson, immediately called foul on the proposed map. The population of people of color in her district has grown over the last 10 years, while the white population has dropped. But the proposed map reconfigures the district to potentially give Republicans an advantage.

“The proposed State Senate map is a direct assault on the voting rights of minority citizens in Senate District 10 and, if adopted, it would be an act of intentional discrimination,” she said in a statement. “The 2020 census revealed the population of Senate District 10 is nearly ideal. There is no need to make any changes to district lines. Moreover, since 2010, the minority population percentage within the district increased dramatically while the Anglo percentage has dropped. The changes now proposed are intended to silence and destroy the established and growing voting strength of minority voters in Tarrant County.” 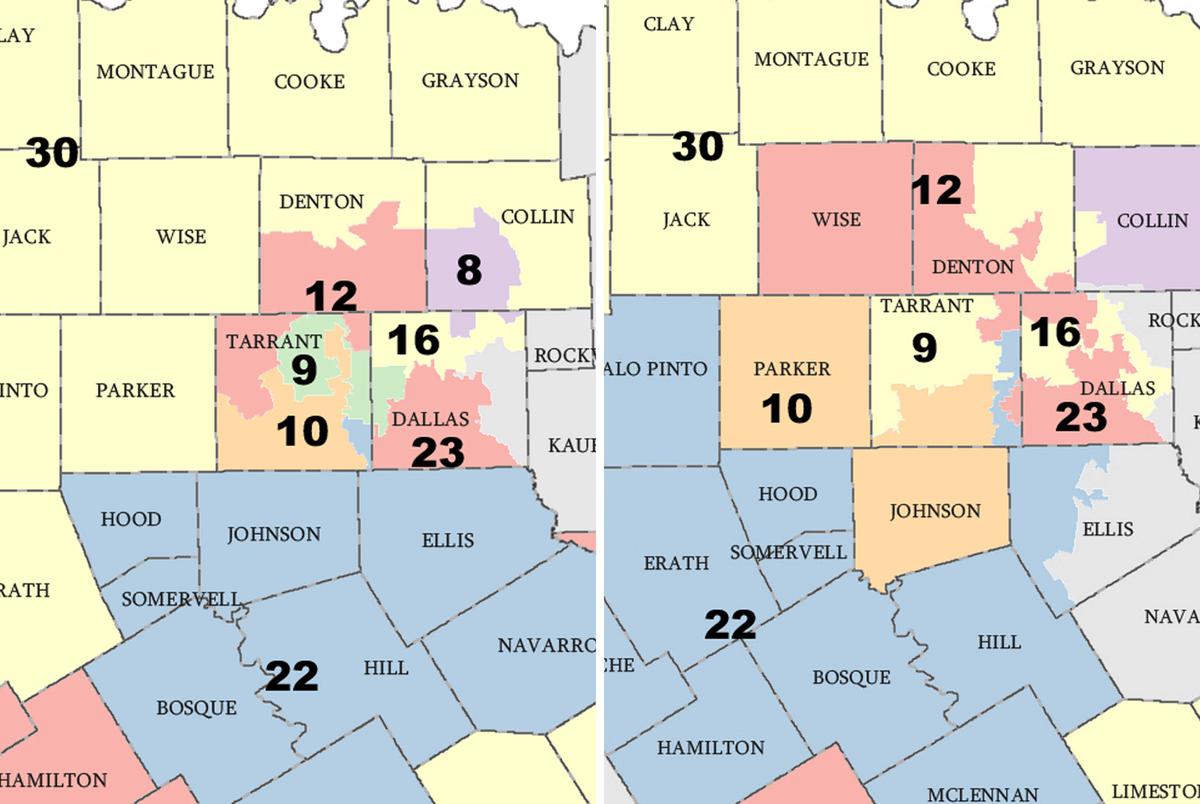 Texas' current Senate District 10, left, and District 10 in the proposed new Senate map. SD 10 is held by a Democrat and currently contained in Tarrant County, which voted for President Joe Biden in the 2020 election. The new version of District 10 reaches into more conservative Parker and Johnson counties, making it harder for a Democrat to win there. Credit: Texas Legislative Council

Powell’s district is currently contained in Tarrant County, which voted for Biden in the 2020 election, but the new version of District 10 reaches into more conservative Parker and Johnson counties.

The district swung between Democrats and Republicans for much of the last decade. Democrat Wendy Davis represented it from 2009-15 before leaving office to run a losing campaign for governor. Republican Konni Burton took over the seat in 2015 and held it for four years until she was defeated by Powell.

In 2018, Democrats there also gained seats in local offices at the commissioners court, and the minority party sees the urban county as an opportunity to grow its numbers in the Legislature due to demographic changes.

In 2020, 53% of Powell’s district voted for Biden. But under the proposed redrawing, District 10 would be made up of 42% of Biden voters, compared with 57% who supported Trump.

Elsewhere in Tarrant County, Senate District, represented by Sen. Kelly Hancock, R-North Richland Hills, is split between Dallas and Tarrant counties. But in the proposed map, the district would sit entirely in Tarrant, with enclaves in the northern and western areas of the county that would make it safer for a Republican candidate.

In 2020, Hancock’s district split nearly down the middle between Trump and Biden, with only slightly more than 5,500 voters in the district giving Trump the edge.

Senate District 12, represented by outgoing Sen. Jane Nelson, R-Flower Mound, could also have significantly changed boundaries. The district currently sits mostly in Denton and Tarrant counties. The proposed map would split it between solidly Republican Wise County, mostly Republican parts of Tarrant and Denton, and some competitive areas of southeast Denton and northwest and north Dallas, including the affluent Park Cites.

The more Democratic-leaning areas in Denton and Dallas could make an election slightly more difficult for the next Republican after Nelson’s retirement at the end of her term after nearly 20 years in office. But the portions of Wise, Tarrant and Denton should shore up Republican support.

Another outgoing senator whose district would be significantly changed is Republican Dawn Buckingham of Lakeway in District 24, who is not seeking reelection and instead will run for land commissioner. Parts of her district in Burnet and Blanco counties in central Texas would be added to fellow Republican Donna Campbell’s Senate District 25. Campbell represents parts of Hays County, which has seen an increase in Democratic voting in recent years.

But the next senator from District 24 could benefit from new Republican votes in Medina County and parts of Atascosa County, which currently sit in Democrat Roland Gutierrez’s District 19.

In Dallas County, Democrat Nathan Johnson could also see some changes to his district, which includes most of the northern parts of the county. Under the proposed map, Senate District 16 would drop slightly south in some areas and also pick up some western portions of the county that have previously voted Republican.

Paxton, whose Senate District 8 is anchored in Collin County but drops down into sections of Democratic-leaning Dallas County, could see her district become more favorable under the proposed map, which would replace Dallas sections with new areas in Hunt and Rains counties, which are more favorable to the GOP.

Huffman, whose district narrowly voted for Biden, is also trying to shore up her district. Senate District 17 runs through Brazoria, parts of Fort Bend County and parts of Harris County. The proposed map keeps parts of Harris, Fort Bend and Brazoria, but also adds GOP-leaning counties like Colorado, Wharton, Matagorda and Jackson, as well as a part of Waller County.

All four maps will ultimately have to be approved by the House and Senate and signed into law by Gov. Greg Abbott. After they’re debated, amended, passed and signed, lawsuits — some of which have already been filed — will move redistricting into the courts, possibly resulting in more changes before the 2022 elections.

This is the first time in decades federal law allows Texas to draw and use political maps without first getting federal approval to ensure that they’re not disenfranchising the voting rights of people of color. That federal preclearance requirement in the Voting Rights Act was gutted by the Supreme Court in 2013.

“The release of the proposed map is only the beginning of the fight. I’m proud to be the candidate of choice of minority citizens in Senate District 10 and will do everything within my power to stop this direct, discriminatory, and illegal attack on their voting rights,” Powell said.