DEL RIO — Five days after Haitian President Jovenel Moise was assassinated by a group of foreign mercenaries on July 7, 29-year-old Stelin Jean decided to flee the country with his wife and two children — traveling to Bolivia, where many Haitians have arrived recently before starting an arduous overland trek to the United States.

The family was in Panama last month when a 7.2 magnitude earthquake struck Haiti, destroying thousands of homes and killing more than 2,000 people. Jean said some of his family members were injured in the earthquake, which only increased their sense of urgency to make it to the United States.

“There’s people killing each other in Haiti, there’s just no justice,” said Jean, who arrived at the U.S.-Mexico border on Wednesday afternoon after a two-month trek through the jungles of South America and then crossed the Rio Grande at Del Rio to claim asylum. “I just want to live a calm life without any problems, I want to live somewhere where I know there’s justice.”

The family has joined an estimated 12,000 migrants who in recent days have arrived at the border and are now waiting under the Del Rio international bridge, about 150 miles west of San Antonio, to be processed by U.S. Customs and Border Protection. Most are from Haiti and are seeking asylum in the U.S.

On Friday, Del Rio Mayor Bruno Lozano declared a local state of disaster and said the city is closing the toll booths on the international bridge connecting the city to Ciudad Acuña to halt traffic across the bridge, as a security measure.

The city later released a statement that said "international traffic will continue as normal" and people could be seen going back and forth on the bridge Friday evening. But late Friday, U.S. Customs and Border Protection announced that the port of entry would temporarily shutter.

"This temporary closure and shift is necessary in order for CBP to respond to urgent safety and security needs presented by an influx of migrants into Del Rio and is effective immediately," the agency said in a statement. "It will advance and protect national interests and help ensure the safety of the traveling public, commercial traffic, and CBP employees and facilities."

Traffic that normally uses border bridges into Del Rio will be directed 57 miles east to Eagle Pass, federal officials said. They did not indicate how long the Del Rio closures would last.

Lozano said earlier he had requested assistance from the state to help deter more migrants from entering the city. He said the city expects an additional 8,000 migrants to arrive in the coming days.

The sheer numbers arriving so quickly in Del Rio, a city of about 35,000 residents, has local officials worrying about how to feed and house thousands of migrants who for now are being forced to wait in the shade of the bridge.

“Dire circumstances require dire responses,” Lozano said. “There’s people having babies down there [under the bridge], there’s people collapsing out of the heat. They’re pretty aggressive, rightly so — they’ve been in the heat day after day after day.”

At an appearance in Fort Worth on Friday, Gov. Greg Abbott said the U.S. Department of Defense and the Department of Homeland Security have told the state that the migrants will be relocated to Arizona, California and perhaps Laredo. "But one thing that we know for a fact and that is, there's nothing but uncertainty and indecision by the Biden administration about exactly what they're going to do," Abbott said.

Many of the migrants in Del Rio said they began their journey years ago, fleeing Haiti after previous disasters such as the devastating 2010 earthquake.

Junior Pacheco, 38, said he left Haiti for Chile, where he lived for five years before he made his way to the Texas-Mexico border in August. He said that after arriving in Mexico, police asked for his passport as he was exiting a charter bus and never returned it.

“There’s a lot of abuse on the way here. From people to the police, they steal our money, our passports. There’s some people who get stranded on the way,” he said in a phone interview from Ciudad Acuña, where he was buying food, water and a tent so his family could have somewhere to sleep. 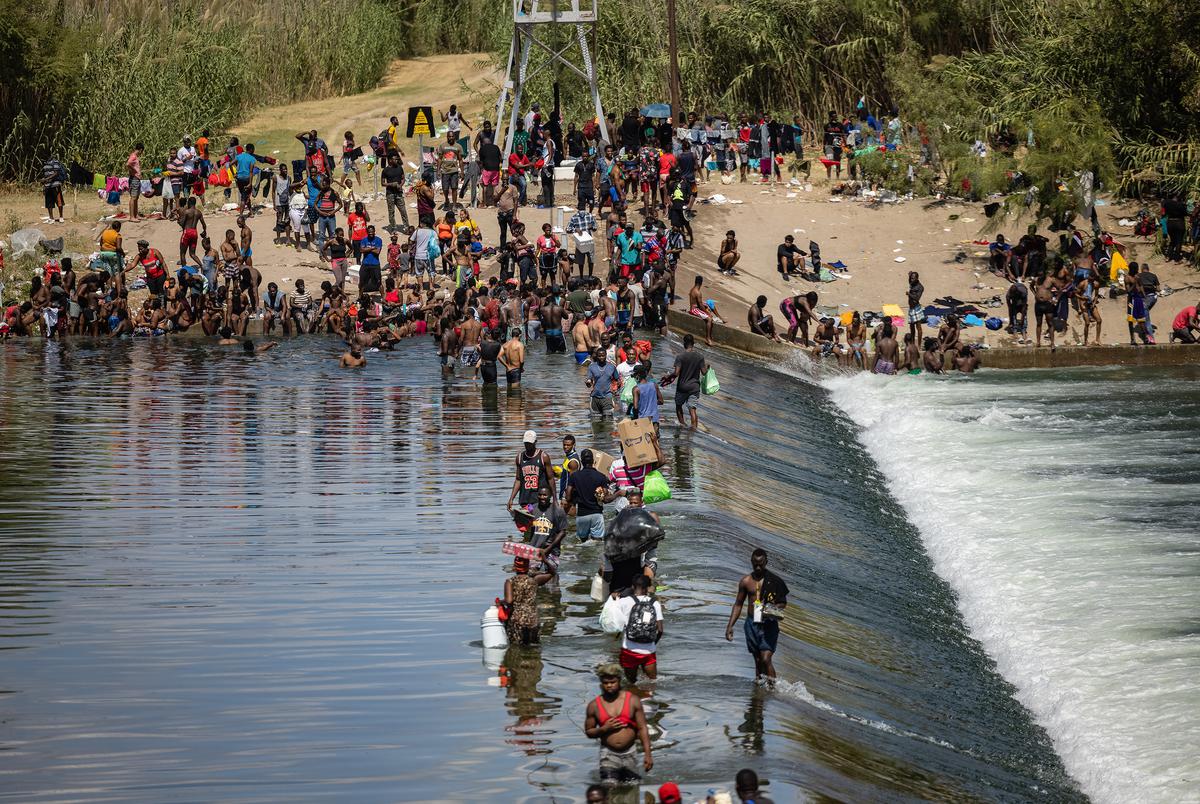 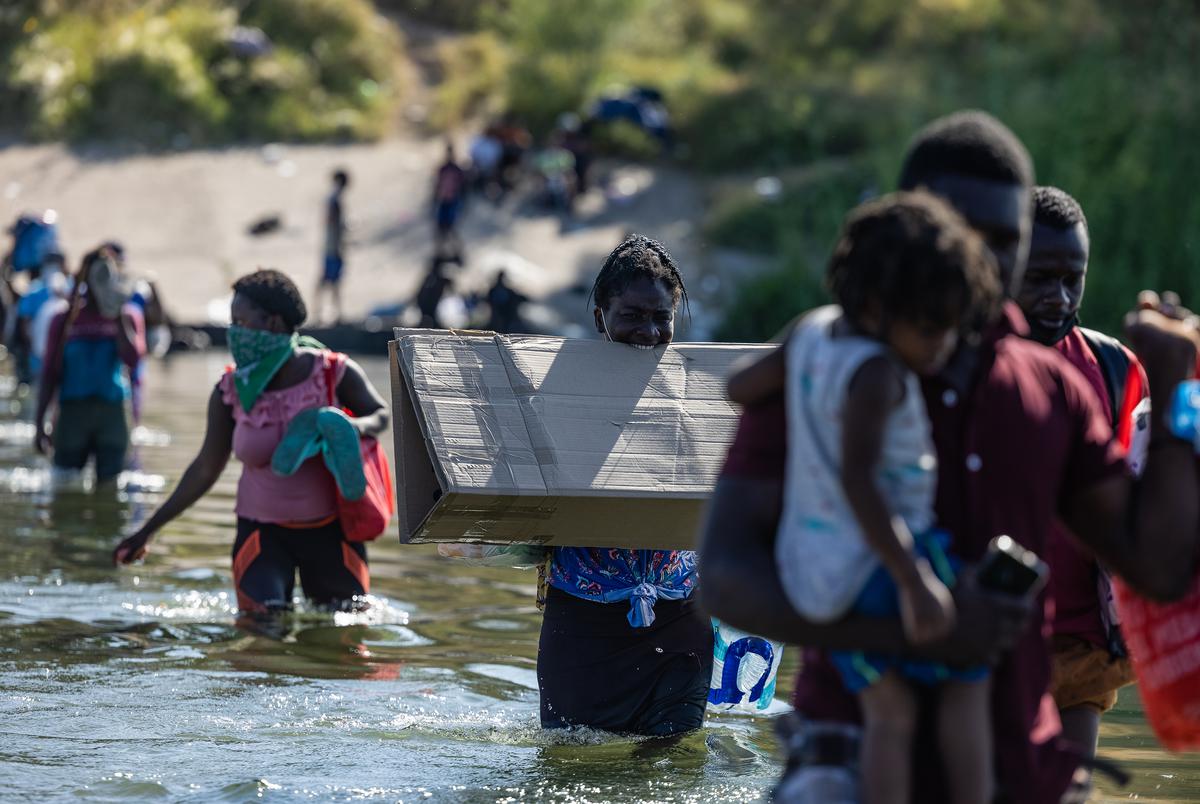 Migrants cross the Rio Grande between the United States and Mexico in Ciudad Acuña, across the border from Del Rio. Credit: Jordan Vonderhaar for the Texas Tribune

“Things are calm right now, we just wanted to get here,” he said. “We’re not afraid anymore.”

Migrants who fled to South America say the trek north was treacherous, with criminals and vendors taking advantage of vulnerable migrants. Videos shared widely on social media in recent weeks show the Mexican military using force as they attempted to stop Haitians from crossing the country’s border with Guatemala.

On Thursday, hundreds of migrants waded across the Rio Grande between Del Rio and Ciudad Acuña, carrying children on their shoulders, carrying water bottles over their heads and gathering cardboard to sleep on.

Eduardo Vargas, 27, said he arrived in Del Rio from his native Chile on Tuesday with his 8-month-old daughter and his wife to make an asylum claim. He said he left Chile because he couldn’t find work to support his family.

Like the others waiting under the bridge, he said he received a ticket from U.S. officials and is waiting for his number to be called so he can request asylum.

He said in the time his family has been in Del Rio, he and other migrants have routinely crossed the shallow Rio Grande to buy food and water in Ciudad Acuña. They’ve been sleeping on the ground under the bridge and bathing and washing their clothes in the river, he said.

“We want to leave here,” he said. “We don’t have a lot of money to buy food, and we’re not eating well or drinking a lot of water. We’re hungry.”

Tomas Jean, 49, left his wife and son in Haiti, and if he is able to start a new life in the U.S., he said he plans to bring his family. He said he left because of the political turmoil in Haiti. 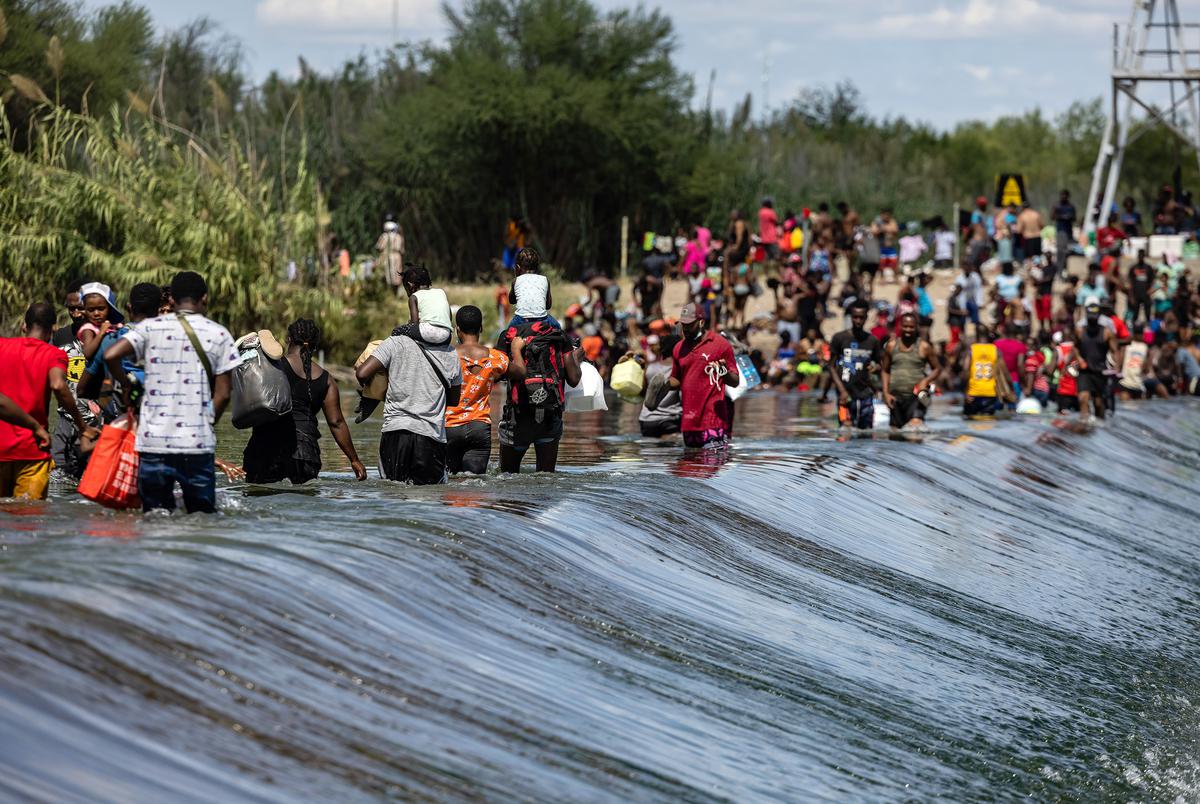 Migrants have waded across the Rio Grande to buy water, food and other supplies in Ciudad Acuña as they wait for their turn to request asylum on the U.S. side. Credit: Jordan Vonderhaar for The Texas Tribune

“In Haiti there’s a lot of problems, that’s why a lot of Haitians are leaving because they're looking for a better life,” he said.

He said he started his trip with money, legal papers and other personal belongings. By the time he arrived in Del Rio, he said, he only had his passport and enough money to buy deodorant in Ciudad Acuña, where he was also scavenging for cardboard.

“There was a lot of problems coming through South America, there were criminals, the police and immigration,” he said. “Robbers demanded my money and took a lot of my paperwork, too.”

Tiffany Burrow, operations director of the Val Verde Border Humanitarian Coalition respite center, said once the thousands of migrants waiting under the bridge are released by U.S. Customs and Border Protection, the coalition won’t have the space or resources to help them all.

“Simple things, like juice boxes, we’ve run out of, but there will be community people who will ask what we need and we’ll be able to [get more],” she said. “But can we get 10,000? Probably not.”

Jordan Vonderhaar and James Barragán contributed to this story.