Temperatures heat back up for the rest of the week

In early November 2020, she attended an outdoor concert with her mother and younger daughter in Dallas, a couple of days after begrudgingly attending a mandatory in-person meeting at work.

“When I got home I was like, ‘[The cough] is probably because I was around all the plants and being outside. That probably aggravated my sinuses,’” said Lewis, 33, who lives in Dallas. “Didn’t think much of it, just went to bed. But the next morning I woke up and I felt like a train hit me.”

After being told that some co-workers also felt sick, Lewis decided to get tested for COVID-19 and her results came back positive. But her situation was more complex than most people who have contracted the virus because she was three months pregnant at the time.

Nights were the worst, she said, with the difficulty breathing making it feel like “a weight was on your chest.” Even getting up to go to the bathroom was a chore that required help from her husband and, at one point, her daily diet mainly consisted of just chicken broth and Pedialyte.

Although Lewis was never hospitalized with COVID-19 and later recovered, the experience still sticks with her, and when the coronavirus vaccine became available to high-risk Texans at the start of the year, Lewis jumped at the chance to get vaccinated. On April 23, she delivered a baby boy, Langston, with no major complications.

Not all pregnant women are as eager as Lewis about getting vaccinated, however.

Pregnant women have one of the lowest vaccination rates in the United States: As of Sept. 4, about 25% of pregnant women ages 18 to 49 have received at least one vaccine dose nationally, according to the Centers for Disease Control and Prevention. That’s significantly less than the most recent national average for that age group, which is about 61%.

The Texas Department of State Health Services currently does not collect vaccination data on pregnant women, said Lara Anton, an agency spokesperson, and also does not track cases, hospitalizations or deaths among this group.

Doctors said there’s no single reason for the low vaccination numbers, although vaccine hesitancy and misinformation have played a role.

Recently, pregnant patients with COVID-19 have come in to Texas hospitals at levels not seen earlier in the pandemic, according to some doctors, illustrating the severity and contagiousness of the delta variant amid the state’s most recent COVID-19 surge.

Last August, more than 15 pregnant women were hospitalized with COVID-19 at Texas Children’s Pavilion for Women. This August, the number nearly doubled, according to Texas Children’s.

“This variant is much more aggressive, [and] pregnant women are getting sicker much faster,” Gandhi said.

The CDC’s recent recommendation that pregnant people get the vaccine has given medical professionals hope that more will do so. But they know it will still be a battle to overcome some of the hesitancy that has set in since the start of the pandemic.

“Women want to make the best decision for them and their unborn child, and it’s a really difficult position when they don’t include pregnant or lactating women in the [vaccine clinical] trial,” said Dr. Teresa Baker, professor and regional chair of the department of obstetrics and gynecology at the Texas Tech Health Sciences Center in Amarillo.

Pregnant and lactating women have long been excluded from initial clinical trials due to the possibility of putting an unborn fetus at risk, Baker said, so it wasn’t a surprise that the same thing happened during the development of COVID-19 vaccines. But with the lack of initial information about how COVID-19 affects pregnant people and mixed guidance by CDC and leading medical organizations, many pregnant people felt left in the dark about the best way to protect themselves.

“We just were working with a lot of unknowns for a long time and that made it uncomfortable for everyone, but I think we’re catching up slowly,” Baker said.

A recent study in the American Journal of Obstetrics & Gynecology found that the vaccines offer similar protection for both pregnant and nonpregnant women.

Dr. Jerald Goldstein, founder and medical director of the Fertility Specialists of Texas, said false claims circulating on social media that women will become infertile or sterile from being vaccinated have contributed to some of the hesitancy.

The online misinformation has “definitely created a lot of work for doctors in terms of talking to patients who really, really believe that,” Goldstein said.

According to a recent study in the American Society for Reproductive Medicine journal, F&S Reports, “neither previous illness with COVID-19 nor antibodies produced from vaccination to COVID-19 will cause sterility.”

Studies have also shown that receiving the vaccine does not lead to an increased risk of miscarriage or birth defects.

Gandhi, the maternal-fetal specialist at Texas Children’s, said the most important part of her day now is making sure patients realize the benefits of getting vaccinated and how much it reduces the risk of getting sick with COVID-19 and having to be intubated or enduring a premature delivery.

She has also urged people who are pregnant to not wait until they deliver their baby to get vaccinated.

“The highest risk time is while they’re pregnant,” Gandhi said. “... Getting vaccines [generate] antibodies that can cross the placenta and potentially protect the baby so there's actually a bonus: You’re also adding to the protection of your baby who may get exposed after delivery.”

Austin resident Brittany Clay has never really seen herself as an early adopter to much in life. However, things changed once she learned she was pregnant in October 2020.

“It was such a scary time for our family, and when you go through circumstances like that, it’s just not that difficult of a decision to get the vaccine,” Clay said.

But the vaccine wasn’t available to high-risk people until December, and Clay still wanted to do her homework first. In January, about six months before the CDC recommended pregnant people get the coronavirus vaccine, Clay and her husband started collecting reports and studies about pregnant women and COVID-19.

Clay said she also gravitated to reading about experiences shared on social media by doctors who were pregnant themselves and got the vaccine.

“Being pregnant in a pandemic has so many added stressors and so many additional layers of fear and unpredictability, so much of it can be out of your control,” Clay said. “So then to add this additional unknown of this vaccine that, you know, has been around for nine months is a really scary decision, and I just try to honor and respect the fact that this is a decision that people have to make on their own.”

During her research, she also reconnected with Lewis, an old classmate from Texas Christian University, through social media. Clay was curious to hear about Lewis’ experience with COVID-19 during pregnancy.

Since reconnecting, they have bonded over motherhood and the shared experience of getting vaccinated while pregnant. Clay was fully vaccinated by February and delivered a baby girl named Navy on June 22.

“I later went back to [Lauren] after I had Navy, and I was like, ‘You might have saved my life. Thank you so much for sharing your COVID experience with me,’” Clay said.

For both women, the importance of getting vaccinated was underscored by the news that one of their TCU classmates who was unvaccinated had died from complications of the virus after delivering her baby.

“That has felt so haunting and so sad,” Clay said. “She was just so young and her family is now really trying to get the word out about the vaccines, and I recognize the severity of the cases are just getting more and more severe for pregnant women.”

Lewis has made it a personal mission to encourage pregnant women to get vaccinated and posted videos of herself being vaccinated on social media. 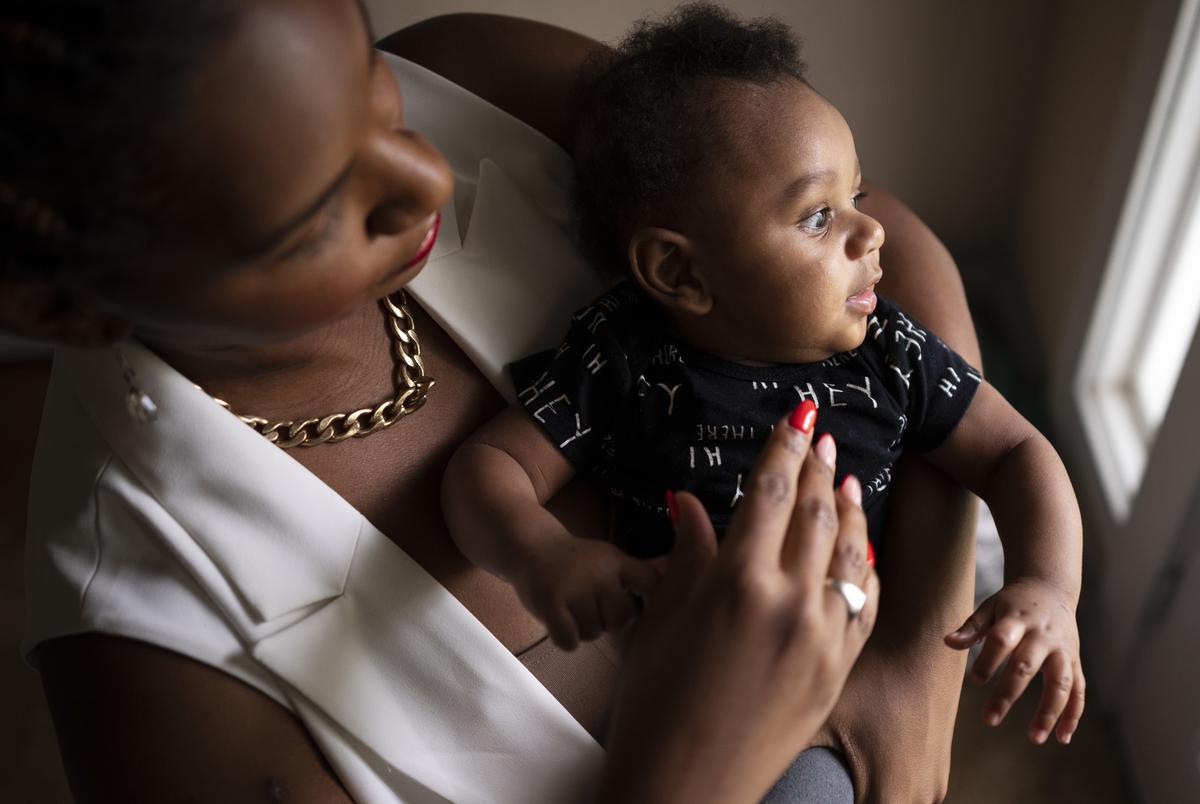 Lauren Lewis holds her baby, Langston, at their home in Dallas. Credit: Ben Torres for The Texas Tribune

“If you have any questions, please reach out to me,” Lewis said on video in February after receiving her second dose. “I’m very pregnant, so I have a different perspective because I’ve had COVID.”

Lewis said she hopes other expectant mothers will heed her advice.

“I mean, [COVID-19] really sucked the life out of me,” Lewis said. “... Honestly, I'm waiting to go get my third shot. I want to get it because I don’t ever want to feel the way I felt with COVID, and I don’t want anybody to ever feel that way when they don’t have to.”

Disclosure: Texas Christian University has been a financial supporter of The Texas Tribune, a nonprofit, nonpartisan news organization that is funded in part by donations from members, foundations and corporate sponsors. Financial supporters play no role in the Tribune's journalism. Find a complete list of them here.

Correction, Sept. 16, 2021: A previous version of this story incorrectly stated when Brittany Clay’s grandfather died. His death was in October 2020, not September 2020.