Rain & lower temperatures back in the forecast

For weeks, construction crews have been working about half a mile north of the Rio Grande in Mission, erecting 15-foot concrete panels topped with 6-foot steel bollards.

The federal government describes the imposing structure as an upgrade to the levee system that protects Rio Grande Valley residents from potential flooding. The area previously had an earthen levee that lacked concrete and steel.

The U.S. Army Corps of Engineers said the structure “is part of [U.S. Department of Homeland Security] plans announced April 30 to reduce flooding risk to border communities in the Rio Grande Valley near McAllen, Texas. The levee repair work does not involve expanding the border barrier.”

But to immigrant advocates and environmentalists, what the Department of Homeland Security is building is clearly a border wall.

“It pretty much has the same symbolic look as the Trump wall,” said Roberto Lopez, a community organizer with the Texas Civil Rights Project, a nonprofit organization that advocates for migrants’ rights and other social justice issues. 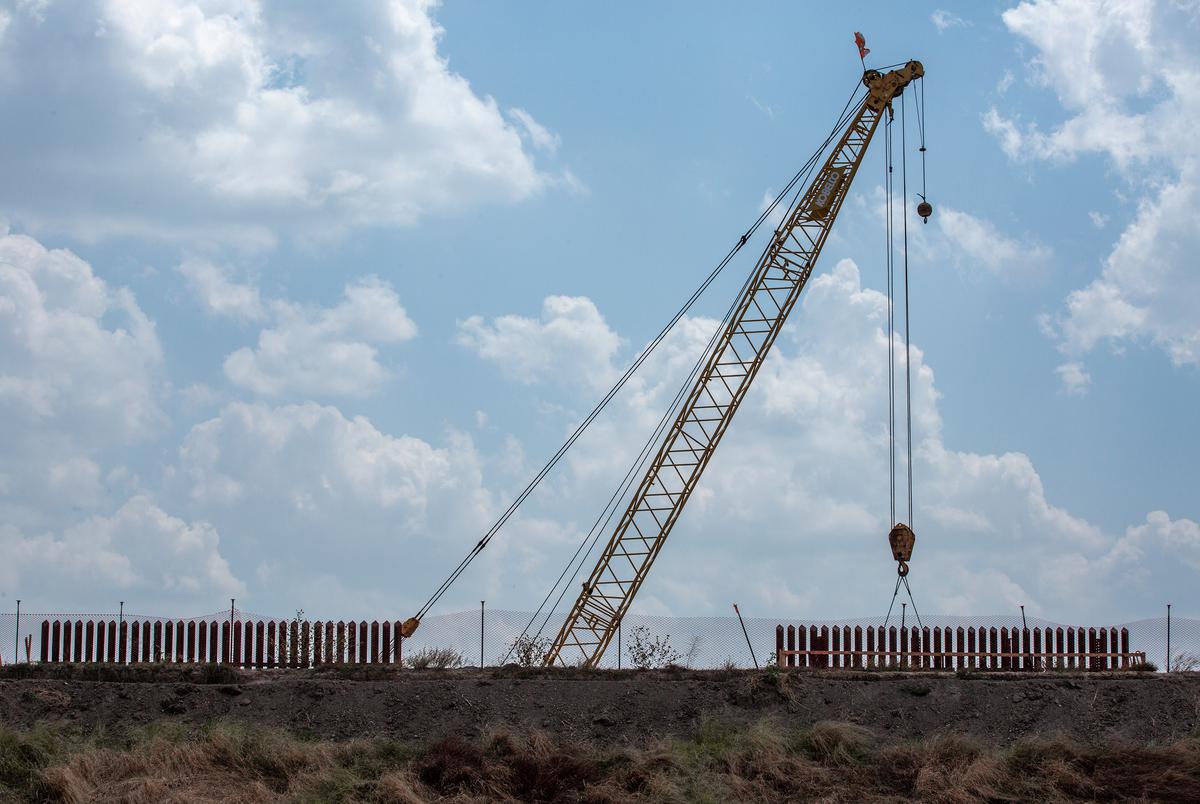 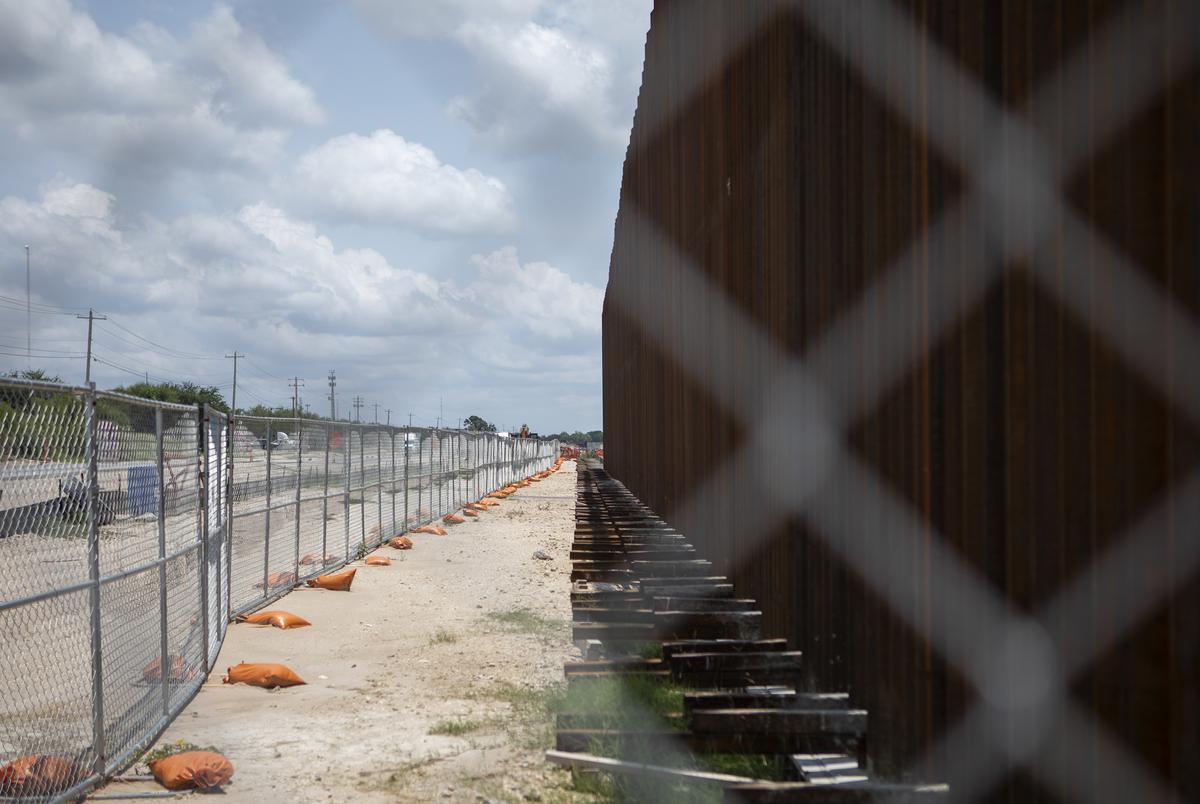 A portion of an unfinished border wall stands near the U.S. and Mexico border in Del Rio on July 22, 2021. Credit: Miguel Gutierrez Jr./The Texas Tribune

First: Construction cranes in Mission build what federal officials say is an improved levee near the Rio Grande. Last: A portion of unfinished border wall stands near the U.S.-Mexico border in Del Rio. Construction of the wall was started by former President Donald Trump but halted by President Joe Biden. Credit: Jason Garza and Miguel Gutierrez Jr. for The Texas Tribune

Lopez and other wall opponents see the structure as a broken promise by Biden, who on his first day in office said “no more American taxpayer dollars be diverted to construct a border wall.” He called for a pause on any border wall construction and a review of the resources spent by the previous administration.

“Despite what administration officials want us to believe, border wall construction continues in South Texas,” said Eduardo Martinez, a member of the Rio Grande Valley No Border Wall Coalition.

In other parts of the Valley, sections of the border wall constructed during former President Donald Trump’s administration — which built 21 miles of new barrier along the Texas-Mexico border — are also concrete topped by steel bollards. Three miles east of the new project, the Trump-era wall is 30 feet tall, half concrete and half steel bollards.

In a June statement announcing the start of the levee project, Homeland Security said, “These activities support the Administration policy to protect national and border security and address the humanitarian challenges at the southern border while remaining consistent with President Biden’s commitment” not to continue expanding border barriers.

DHS did not say specifically where it was making levee repairs, but local wall opponents and environmentalists first spotted the construction in July near Mission, Abram and Donna.

Scott Nicol, a McAllen-based environmental activist, said he believes the government used the levee repair as a pretext to continue building parts of the wall.

“They’re just using this as a loophole, to start construction so that those contractors get the full payout for finishing out the contract” they signed during the Trump administration, he said.

The U.S. Army Corps of Engineers said the contractors hired for the project are Sullivan Land Services Co., Southwest Valley Constructors and Gibraltar Caddell — companies that had been awarded contracts to build border barriers near McAllen and Brownsville.

Two of the companies didn’t immediately respond to emails and calls from The Texas Tribune seeking comment. A spokesperson for Sullivan Land Services Co. referred questions to U.S. Customs and Border Protection and the Army Corps of Engineers.

DHS previously said that it terminated some contracts to build border barriers and repurposed others to address environmental issues “resulting from the previous administration’s border wall.” The Biden administration has paused the remaining contracts and continues to review them.

Nicol said he’s opposed to the project because the high walls could cut off access to the river for some animals — while others could drown if they’re trapped on the river side of the barrier during flooding.

“A big concern is when these levee walls are being built, it will stop the movement of endangered species like ocelots,” he said.

Lopez said levees are important to protect lives and property from flooding on the Rio Grande, especially during hurricane season, but that it’s a waste of money to build a wall.

“I think that they’re taking this opportunity to continue putting up the border wall that everybody who’s been calling for one wants,” Lopez said. “That way the Biden administration can have their cake and eat it, too.”

Ronald Rael, an architecture professor at the University of California, Berkeley, said it’s not uncommon to build walls to reinforce a levee. But if a levee is topped with metal bollards then it could also serve as a way to prevent people from crossing it, he added.