WASHINGTON – Sign up for The Brief, our daily newsletter that keeps readers up to speed on the most essential Texas news.

West Virginia Sen. Joe Manchin — a key Democratic holdout over efforts to pass federal voting rights legislation — is expected to head to Texas on Friday for a fundraiser with a host committee that includes several wealthy Republican donors.

The fundraiser comes just a day after Manchin met with Texas House Democrats on Capitol Hill who are desperate for his support of the congressional efforts which could preempt the statewide GOP’s push to pass bills that would restrict voting access for Texans.

Manchin is also one of two Democratic senators, along with Kyrsten Sinema of Arizona, who have proven to be obstacles to moving voting rights legislation through the U.S. Senate. At the center of the impasse is their opposition to eliminating or changing the filibuster, which requires 60 senators to put a bill on the floor.

“We invite you to join us for a special evening supporting our friend, U.S. Senator Joe Manchin,” according to the invitation’s cover letter, which went on to call Manchin “a longtime friend since his days as Governor of West Virginia.”

The host committee includes titans of the Texas oil and gas industry — many of whom donate almost exclusively to Republicans. But there is a prominent Democrat included among the hosts: former Houston Mayor Bill White. White was the 2010 Democratic nominee for governor, and declined to comment on this story. All of the other hosts could not immediately be reached for comment. 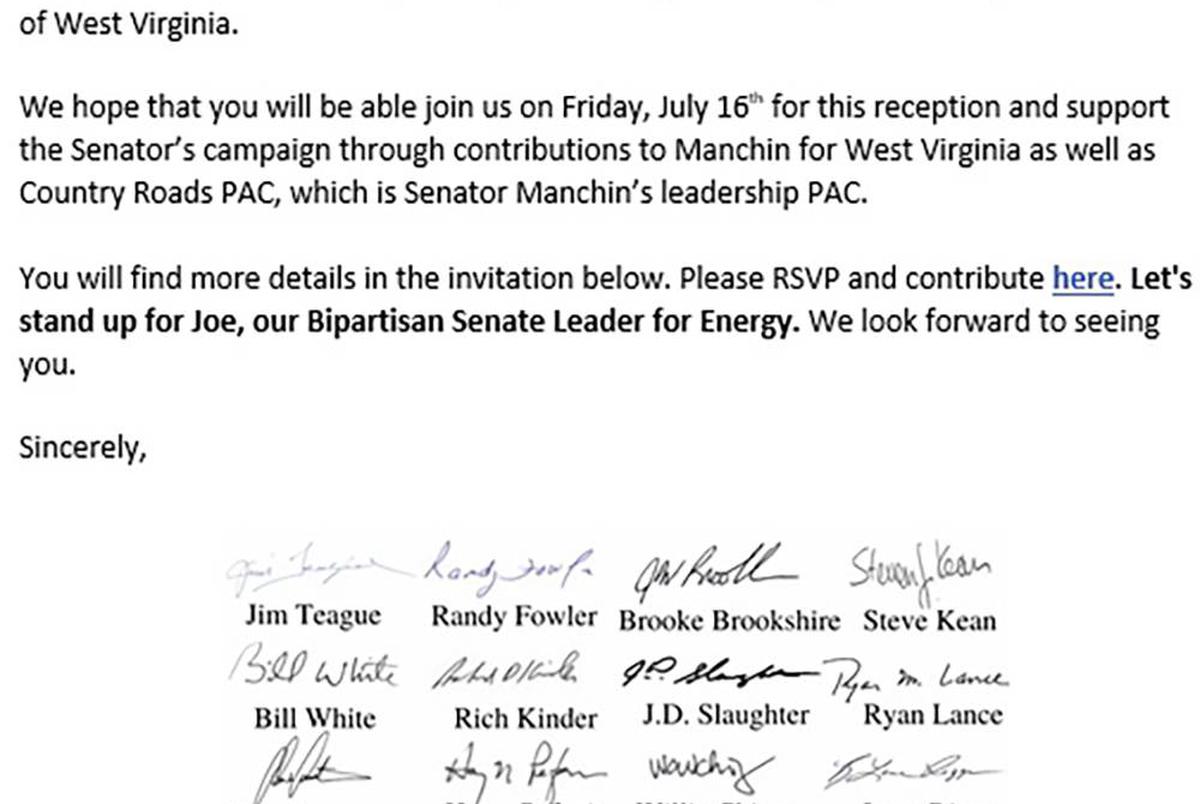 An invitation to a Houston fundraiser for U.S. Sen. Joe Manchin, D-West Virginia, obtained by The Texas Tribune. Credit: Screenshot

Manchin is the chair of the Senate Energy and Natural Resources Committee, the most powerful perch on Capitol Hill when it comes to oil and gas policy. He will be up for reelection in 2024.

Among the hosts are oil billionaires like Jeff Hildebrand, who cofounded the energy company Hilcorp, and Richard Kinder, a cofounder of Kinder Morgan, an energy infrastructure company. Former Texas Gov. Rick Perry appointed Hildebrand to the University of Texas Board of Regents for a six-year term beginning in 2013.

The fundraiser will take place late Friday afternoon in the River Oaks area of Houston, one of the wealthiest neighborhoods in Texas. An invitation obtained by The Texas Tribune encouraged donors to contribute $5,800 to Manchin’s reelection campaign and $5,000 to his leadership PAC. Organizers anticipate more than 150 people to attend, according to a source familiar with the event.

Manchin’s office did not respond to requests for comment.

Many of the hosts are prolific donors to past GOP nominees, including former President Donald Trump, and to organizations like the Republican Party of Texas, the Republican National Committee, state parties, GOP candidates across the country and Republicans in U.S. Senate and House leadership. Hosts have also contributed to Gov. Greg Abbott, Lt. Gov. Dan Patrick and House Speaker Dade Phelan.

Even so, some of these donors have made occasional contributions to Democrats who are either moderate or serve on committees with oversight of the energy sector. Energy is a key driver of the Houston economy.

Some of the Democrats over the years who are on the receiving end of these donations include U.S. Rep. Lizzie Pannill Fletcher, the West Houston congresswoman who serves on the U.S. House Energy and Commerce Committee, former U.S. Sens. Max Baucus of Montana and Mary Landrieu of Louisiana and former U.S. Rep. Dan Lipinksi of Illinois.

“We basically are just getting some people together to show our support,” said Darren Blanton, a Republican donor who planned to attend the event.

He pushed back on the notion that this is a wholly Republican event.

“It’s just people that respect and support him,” he said.

Democrats flew to Washington, D.C., on Monday in a bid to break the House’s quorum and prevent the passage of the GOP’s priority voting bill.

In their time in Washington this summer, Manchin and his staff have been receptive to the state’s Democratic legislative and Congressional delegations, taking meetings with the Texans both in June and this week. Texas Democrats interviewed after a June meeting praised Manchin for being receptive to their arguments.

They vow to stay outside of Texas until the special legislative session ends Aug. 6, but Abbott has said he’ll continue to call special sessions until the bill is passed.

Democrats have said they chose the nation’s capital for their decampment largely so they could urge Congress to take federal action, given that Republicans have majorities in both chambers of the Legislature and are poised to push through their priorities.

Carla Astudillo contributed to this report.