Employees of Houston restaurant sound off on social media, claiming the closed eatery owes them back pay after writing series of bad checks

Man sentenced to 35 years in prison for fatally shooting longtime friend over stolen items in Houston’s south side, DA says

Analysis: A critical culture war over how to teach history

A conservative Austin think tank is touting a list of no-nos worthy of Dolores Umbridge, or, if you’re not a Harry Potter fan, of George Orwell.

It’s out of the paranoid “if you see something, say something” genre of civics — a topical guide on how to think about a subject that might or, more likely, might not have been on your mind at all.

In a tweet that was deleted just as Wednesday’s political news shifted to building a wall on the Mexican border, the Texas Public Policy Foundation warned of the things to look out for if you’re worried about disagreeable historical content in public school courses in Texas. 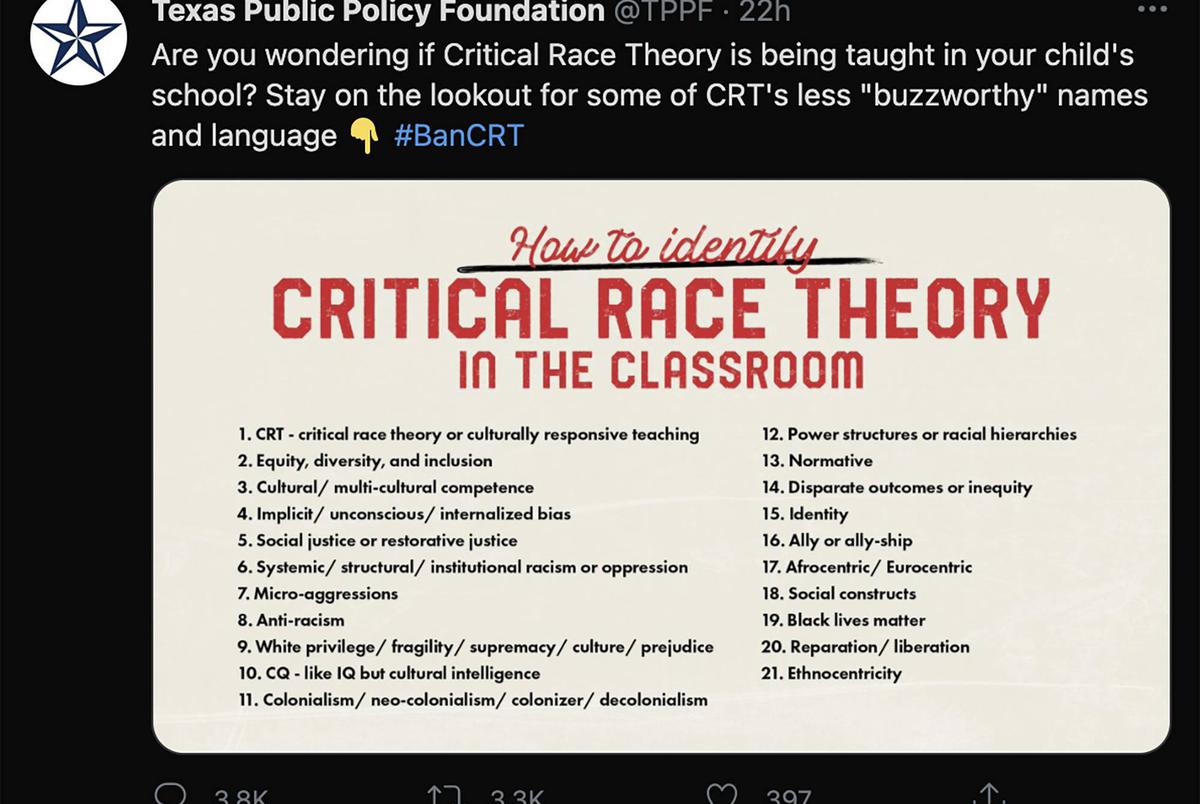 Texas lawmakers have tried to regulate use of critical race theory as an approach to teaching in public schools, and Gov. Greg Abbott has said he wants to go further and might add this to the agenda of a special session starting next week.

“Equity, diversity and inclusion” is a phrase you’ll hear at any big company — and many government agencies, too — from people trying to make sure certain groups don’t have an unfair edge over others. It’s what you do if you’re looking for a good CPA, and not just a good CPA who’s also a white male.

You can go down the TPPF’s list in this manner, but the point is that these folks have gathered words and phrases they consider signs of CRT.

Ignore the ironies and just call it interesting that conservatives who decry cancel culture and politically correct language have produced a document to assist those who want to cancel an approach to history and sociology based on words and phrases that might turn up when they’re used by teachers.

Some of the terms on the list are jargon. It’s unusual to stumble on the word “normative” in regular conversation. Don’t think of people you know; just ask yourself when the last time was that you heard it in your favorite detective show. Or from a sportscaster. Public school students, as you know if you ever were one yourself, just love jargon.

A thought experiment: Teacher A uses a lot of jargon. Teacher B, with a similar class and the same subject matter, doesn’t. They would have disparate outcomes, though we can’t use that phrase here because it’s on the list, and also, because it’s jargon.

All of that is fun, and you can make up more of this stuff with your friends. But it’s serious, because critical race theory is a favorite bugaboo of Republicans right now, and because attacking CRT antagonizes many of the groups they like to antagonize: people of color, women, LGBTQ people and so on.

If you’re a teacher, you want your students to know how to navigate their way through the world. To know what it’s like out there, what the history is, what their chances are, relative to everyone else, and just why things are the way they are.

You have to tell them about race, gender, power, conformity and nonconformity. About how to change the things they don’t like if they’re living in a democracy. About who has an easy ride and who has a hard one — and why that so often doesn’t depend on education and skill, but on “social constructs” and identity.

And about why the people now in power are so defensive about all of these things that, they fear, might unseat some of them. About how much of this is like a game of “king of the hill,” about who holds the hill now and about how to climb it if you’re at the bottom.

The words and phrases aren’t really what the current winners are worried about.

They’re worried about keeping people in their place, and about how education and understanding can be so disruptive to their current standing.

Educated people can change the world — whether the world wants to change or not.

Disclosure: The Texas Public Policy Foundation has been a financial supporter of The Texas Tribune, a nonprofit, nonpartisan news organization that is funded in part by donations from members, foundations and corporate sponsors. Financial supporters play no role in the Tribune’s journalism. Find a complete list of them here.