What increases your chances of survival during a plane crash? KPRC 2 learns multiple vital factors

KPRC 2 Investigates: Car crash confusion and what all drivers should know

Brooke Wagen said her first day as an internal medicine resident at Dell Seton Medical Center’s intensive care unit during Texas’ COVID-19 summer surge was like being hit by a train.

For the first four hours of her 28-hour shift, she learned how to place orders with the hospital’s computer system. Though many details have since blurred together, the 44-year-old remembers a coronavirus patient who came in around 10 p.m. and needed an arterial line, a thin tube that makes it easier to check blood pressure and oxygen levels.

Wagen had never placed one before, so her supervisor told her to just try it out. For three hours, she stayed in the patient’s room, practicing. “Now, I can do one in, like, 10 minutes,” she said.

Overnight, Wagen helped admit more COVID-19 patients, including a man who was lying on his side, gasping for air. Wagen said she had to scream through her protective gear in Spanish to ask the man’s medical history and explain why they had to put a tube down his throat.

“So that was really a great first day — I mean, it was incredibly overwhelming, it was hard, it was long. But also I think it really proved to me why I went into medicine,” Wagen said.

As coronavirus patients flooded ICUs and doctors and nurses often improvised to care for them, thousands of medical school graduates entered or finished their residencies during the health crisis of the century. Across Texas, people who had spent years studying how to practice medicine had to adjust to the new normal — and quickly picked up new skills as the medical community learned how to treat COVID-19 patients.

“People have asked me a lot of times what it was like to be a new intern during COVID,” Wagen said. “I’ve never been a doctor outside of COVID — so I’ll never know.”

Ximena Solis, a 32-year-old fellow in pulmonary medicine and critical care at Texas Tech University, said the pandemic forced her team to rapidly learn new material on the job. They would send each other multiple articles a day from European journals to learn as much as they could about the virus that was attacking patients’ lungs because there was no protocol in place to care for patients yet.

Solis said when she wasn’t working, she would stay up until midnight researching because, for the first time, she didn’t know what to do when certain patients entered the ICU. Though doctors in her field were familiar with respiratory distress syndrome, where fluid builds up in the lungs, Solis said COVID-19 patients with those symptoms were some of the worst cases her team had to stabilize.

“We take care of extremely sick patients in the ICU all the time, but these patients had everything wrong with them,” Solis said. “If you weren’t strong with ventilators before, you had to get extremely strong with them now, because we were changing modes of ventilation on an hourly basis.”

Stephen Line, a 31-year-old chief resident of family medicine at Dell Medical School, said one role that he wasn’t as prepared for when the pandemic began was serving as the link between families and their dying relatives. As he was pulled into ICU shifts last July, Line said he was constantly calling and updating family members — who weren’t allowed to visit because of COVID restrictions — about the condition of intubated patients who couldn’t speak.

“End-of-life discussions with patients in the hospital setting, especially when they can’t be around their family members, [are] heartbreaking,” said Line, who plans to practice primary care and sports medicine. “That was probably one of the challenging, but also rewarding and touching, moments that I got to be there and serve as that person for families.”

Residents remembered how difficult it was to be the only connection to a patients’ loved ones through phone calls. Wagen, the Dell Seton Medical internal medicine resident, said when she spoke to her first COVID-19 patient, the man who had trouble breathing, she normally wouldn’t have to be put in the position to use her Spanish — but the translation services usually conducted over phone or video calls could not be used through all the protective equipment they had to wear.

Dell Seton Medical Center slowly became “almost exclusively COVID,” Wagen said, though it never ran out of beds because they sent patients with issues other than coronavirus to other hospitals while opening up rooms in other units.

When Solis worked in the ICU at the University Medical Center in Lubbock, she had to wear a white Tyvek suit, N95 mask, goggles and a face shield, with additional equipment when they intubated a patient. At one point, the unit’s air conditioning stopped working and, after a day of not eating or drinking for 10 hours, Solis fainted during a procedure. 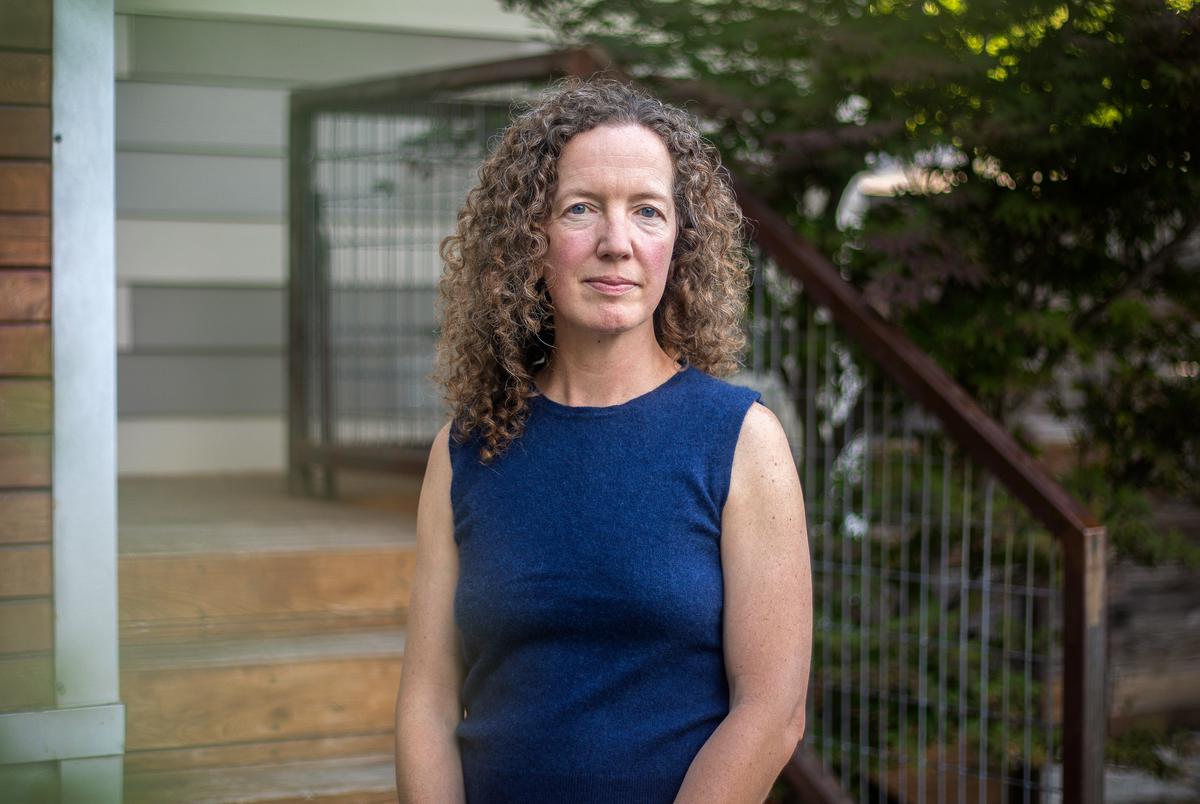 Wagen said despite seeing so much death over the past year, she still cries every time she loses another patient: "I don’t think that we’re better physicians if we stop caring, I think we’re better if we feel a loss.” Credit: Montinique Monroe for the Texas Tribune

After she took some time to recover during the day, she went back to work and took care of more patients because there weren’t enough people to cover the unit.

Dealing with death is normal, especially for ICU doctors, but because of COVID, they confronted death on a much bigger scale. As she cared for dying people, Solis said she would hold an iPad in front of patients and FaceTime relatives so she could explain all of the equipment connected to their loved ones and, in some cases, let them say goodbye.

“[In this job], we’re used to people dying because these patients are, at baseline, extremely sick. With COVID, everything was accelerated,” Solis said. “Losing multiple patients a day was really hard. … Stuff like that really wears on you.”

Wagen said she took several medical school courses on palliative care, which is care for the chronically ill that focuses on improving quality of life, but the pandemic required everything she had to care for her patients, especially during the summer and winter surges that overwhelmed Texas hospitals.

“I cry every time (I lose a patient), and I think that the right thing to do as a doctor is cry,” Wagen said, tearing up. “I don’t think that we’re better physicians if we stop caring. I think we’re better if we feel a loss.”

Residency was already stressful before, said Nicholaus Christian, the internal medicine chief resident at Dell Medical School. The pandemic heightened those stressors — but also gave more leeway to publicly address them, he said.

As a manager, he said he noticed his fellow residents’ drive and motivation fizzle out over the past year and said part of his job is to help them recharge and recover.

During the team’s weekday noon conference, Christian said he started offering the group opportunities to unpack their emotions as they confronted the coronavirus. After an informal poll of the residency program, he said almost everyone had experienced a deep low during the pandemic.

The support system for medical residents looks different within each discipline, team and hospital — from Solis and her team, who cheered for the successes of the patients who made it, to Wagen’s group, who honored those who passed away with ice cream toasts at lunch.

Solis said her group would also meet each other after long shifts to have an hour to “just purge all our thoughts.”

But after all the death and trauma associated with being a young doctor over the last year, the residents said they wouldn’t change their career path — once the pandemic hit, their initial training immediately kicked in, and new skills soon followed.

Solis said she had cycled through many disciplines, including a residency in internal medicine, before becoming a fellow in pulmonary and critical care because it was the only area that didn’t make her “miserable.” She said she’s happy she ended up in this field.

“I think this was a test. It was like, if I was not meant to do this, I would have quit by now,” Solis said. “This year was hard. It was emotionally draining. It was exhausting. But at the end of the day, I wouldn’t have it any other way.”

Because residents are in the unique position to both learn and practice medicine, Line said he was grateful to be in the program as COVID-19 hit.

“I got the privilege of learning a brand-new, novel disease, which is something you think about usually in movies and you read about in textbooks,” Line said. “To actually live through it and have that experience, I’ve become more resilient in the way I approach medicine and my own education.”

Disclosure: Dell and Texas Tech University have been financial supporters of The Texas Tribune, a nonprofit, nonpartisan news organization that is funded in part by donations from members, foundations and corporate sponsors. Financial supporters play no role in the Tribune’s journalism. Find a complete list of them here.