Chris Harper will be awake in the dawn hours this Fourth of July tending his slow-smoked brisket. He’ll wrap up the goods and drive to his parents’ and sibling’s homes near Fort Worth and Arlington for socially distanced and masked up outdoor visits. It’s his way of providing “a bit of normalcy,” without putting himself or his family at risk.

Harper’s small act of acquiescence to the realities of a raging pandemic underscores the choices millions of Texans will make this Independence Day weekend: comply with health and state regulations for the sake of personal and public safety or rebel in the name of personal liberty. The sum of these individual decisions will determine whether Texas’ coronavirus epidemic is pushed further past the brink.

Health officials want people to choose Harper's route, finding safe alternatives to yearly traditions. But with Texas' recent history of temper tantrums by a small but vocal slice of the populace who don't want to wear masks and insist bars and hair salons reopen, that seems unlikely.

A segment of the public has proven it’s restless to get back to normal, and officials worry droves of people will jump at the opportunity to host family-style barbecues, dive in the local swimming pool and gather for fireworks — all things health experts strongly advise against. There’s a palpable fear among local leaders, health officials and even the governor (who’s reversed course on a number of actions) that this year’s celebration might be a multi-day virus superspreader that could pile another layer of anguish and death atop Texas’ ongoing health catastrophe.

Since mid-June, the Lone Star state has reached record high positivity rates, and the number of people hospitalized has more than tripled. Many hospitals in parts of the state are already nearing capacity.

"It's shocking to me that so many people aren't taking this seriously. I'm curious to see how the fourth is going to be as far as what changes and numbers,” Harper said.

If Texans socialize this weekend as they did over the Memorial Day weekend "it could be catastrophic," said Phil Huang, a doctor and director of Dallas County Health and Human Services, in a press conference Thursday.

“What we learned from the cases in June, the rapid rise in Texas has a lot to do with what happened around the Memorial Day holiday and what we did around that time,” said John Carlo, a doctor on the Texas Medical Association’s COVID-19 Task Force. “So I think that it is certainly possible that we could see an even greater risk if the holiday is taken as an opportunity to disregard these social distancing measures.”

Just ahead of the holiday weekend Abbott issued a nearly statewide mask order that goes into effect Friday at noon, a significant departure for the governor who until recently blocked local officials from implementing individual local mask requirements.

Abbott also amended his executive order and lowered outdoor event limits from 100 to 10 people. Outdoor gatherings, like those typically held for the Fourth of July, must be approved by local officials if they more than 10 people are expected. The few exceptions include religious services, outdoor sports and summer camps. Outdoor events of 10 or less do not need prior approval.

That same day, in response to Abbott’s order, Collin County Judge Chris Hill approved all gatherings of more than 10 people.

While health experts said the safest course of action is still to limit contact with others, outdoor events with proper social distancing and face masks pose less of a threat than indoor events. If not you risk breathing circulated air, being in physical contact with more people and inhaling or touching lingering droplets produced by talking, coughing and sneezing. 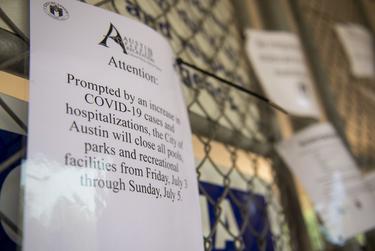 A sign indicating the City of Austin plans to close all pools, parks and recreational facilities over the Fourth of July weekend, at a public pool on July 2, 2020. Allie Goulding/The Texas Tribune

Carlo said he hopes the recent rollback of bar openings and restaurant capacity limits will offset some of the added holiday risks. This weekend he and his wife will be distantly hanging with two friends in their friends’ backyard.

Of 112 Texas mayors surveyed by the Texas Municipal League before Abbott's latest restrictions, 68% said they wouldn’t allow private outdoor gatherings of more than 100 people for the holiday. Of 111 mayors, 27 said they’d hold a Fourth of July celebration through the city.

Across the state, local leaders — including those in Galveston County, Harris County, San Antonio and Austin — have already shut down popular Fourth of July gathering spots including pools, lakes, parks and beaches. A number of cities and counties also canceled their fireworks shows and/or banned firework sales.

As of Friday afternoon, three Houston-area amusement properties, including a boardwalk and aquarium; Movies Inc., an independent theater chain in Corpus Christi and Twin Buttes Reservoir in San Angelo are a few of the places that planned to be open for the holiday weekend.

“As we enter the #July4th holiday weekend, it is imperative that everyone remember we are fighting for our community and the health and safety of our family and friends,” Houston Mayor Sylvester Turner said in a tweet.

Texas’ most populous city will take its “Freedom Over Texas” event online this year. The show will include performances by Trae Tha Truth, Bun B and Mariachi Imperial de America and a fireworks show.

“This Independence Day, we are depending on you to help stop the spread of this deadly virus,” Nirenberg said in a Thursday press conference.

George Smith, who lives near San Antonio, will stay home with his wife and three-year-old and watch the fireworks — one neighbor spends $3,000 to $5,000 on the pyrotechnics every year — from the safety of his home.

“This year I hope the fireworks don’t stop, but I hope nobody has any parties,” Smith said. “There is that worry that they're just gonna have a big party like normal and there's not anything I can do to stop it."

Disclosure: The Texas Municipal League and Texas Medical Association have been financial supporters of The Texas Tribune, a nonprofit, nonpartisan news organization that is funded in part by donations from members, foundations and corporate sponsors. Financial supporters play no role in the Tribune's journalism. Find a complete list of them here.