The massive slowdown of Texas courts and the impact on justice

Early voting starts today: What you need to know

‘They didn’t care about my past’: Local program gives hope and healing for human trafficking survivors

Viky Cruz, 18, moves her tassel on her cap from one side to the other during her graduation ceremony. Cruz, a National Honor Society student whose house burned down during the school year, graduated from Alvin High School on Saturday. May-Ying Lam for the Texas Tribune

Viky Cruz almost missed her high school graduation, which would have been just the latest in a series of disasters that derailed her senior year at Alvin High School, outside of Houston.

Instead, Cruz, who is 18, sat in an orange cap and gown in Alvin Independent School District’s Freedom Field stadium Saturday evening for a socially distanced outdoor graduation in the middle of the coronavirus pandemic, while her family whooped and cheered from the stands. In just a couple of days, Cruz would be heading to South Carolina and starting basic training in the Army National Guard; the date of her departure ended up being later than she’d expected.

This school year, Cruz lost her family’s home to a fire and spent months struggling to get assignments done on her phone using a Wi-Fi hotspot, while squeezed into a small mobile home. She looked forward to the normalcy of seeing her friends for a classic high school ritual this weekend, even if fears of the coronavirus loomed in the background.

Alvin High School officials had planned to hold a virtual graduation. But when the state gave the OK for all school districts to have outdoor ceremonies, they changed course, said Principal Karen Taylor. “We knew that we had to take care of our students physically but also emotionally, and a lot of the students and parents needed this,” she said. “We felt like our students deserved it, our families deserved it.”

Some urban and suburban school districts made the same decisions, despite the public health risks of bringing large groups of people together while COVID-19 continued to circulate. But in others, like Houston and Dallas ISDs, two of the state’s largest districts, superintendents said it was too dangerous and logistically challenging to hold outdoor graduations, even with the state’s guidance.

Alvin High School’s graduating class of more than 600 nearly filled the football field Saturday evening, with chairs spread six feet apart to reduce the risk of COVID-19 transmission. School officials determined a processional would cluster students too close together for safety; instead, each student picked up their seat number in advance and walked to it alone.

📷 Viky Cruz poses for a portrait outside her family's trailer in Alvin. Viky Cruz, 18, whose house burned down during the school year, graduated from Alvin High School on Sat, June 6, 2020. May-Ying Lam for the Texas Tribune

First: Viky Cruz poses for a portrait outside her family's trailer in Alvin. Cruz, whose house burned down during the school year, graduated from Alvin High School on Saturday. Last: A graduate is handed a diploma at the Alvin High School graduation ceremony.

May-Ying Lam for The Texas Tribune

First: Graduates rush off the field as a storm hits during the Alvin High School graduation ceremony. Last: Graduates are seated at socially-distanced intervals on the stadium field.

May-Ying Lam for the Texas Tribune

Diplomas and diploma covers were not yet ready so students walking across the stage picked up a roll of paper congratulating them on graduating. At a station nearby, district staff took photos of students with diploma covers left over from previous graduations, which they sanitized in between every use.

But corralling hundreds of high school seniors and their families did not always go to plan.

School officials handed out masks but did not require students to wear them, so many did not. Caution tape blocked off every other row in the 10,800-seat bleachers, but families still sat shoulder to shoulder. And when stormy skies brought torrents of rain down on the outdoor ceremony, students were ushered into the field house, forced close together in an enclosed space. Some families huddled under the covered parts of the stadium, while others ran from the stands, likely to their cars as directed. They sheltered for about 20 minutes, waiting for the storm clouds to pass.

“Now you can check that off your list as well,” quipped Superintendent Carol Nelson after the orange-clad seniors had trickled back in to the tune of “Pomp and Circumstance.”

Many Texas seniors this June saw their dreams for the highlights of a golden year shattered when COVID-19 forced all schools to shut their doors this spring. No senior prom, an abrupt end to the sports season, forced separation from their friends.

And some students, like Cruz, found the pandemic more like a nightmare than an inconvenience. Just two months before the pandemic shut down her school, Cruz woke up in the large mobile home she shared with her family to the sound of an alarm and the smell of smoke. She ran into her younger sisters’ rooms and dragged them out to her aunt’s house next door. The family is still not sure what caused the fire, which started in the laundry room toward the back of the house. But the home, and many of their possessions, are damaged beyond repair.

By the time the coronavirus became a constant on everyone’s lips, Cruz had moved to a tiny mobile home behind her grandfather’s house, sleeping in the living room while her four siblings, stepdad and mother slept in the single bedroom. “It’s hard because we have no Wi-Fi or anything here,” Cruz said. “We had to use my mom’s hotspot and do the work outside to be able to do our work.”

Her mother, Maria Mandujano, stopped working as a restaurant server, terrified about risking her children’s health. Mandujano’s husband continued working as a cook in the same restaurant, which they felt was less dangerous.

Eager to cultivate a sense of normalcy for Cruz, Mandujano brought in a few family members for an at-home graduation celebration days before the official ceremony. She worries about her oldest daughter leaving the state but is excited that she will be taking the next step in her life, despite the constant disruptions of this year.

“I get a little emotional and sad, but I know she’s going to be OK,” Mandujano said.

On Saturday evening, Cruz sat, often mask-less, among hundreds of her peers, listening to speeches filled with inspirational quotes, pithy jokes and words of advice, just like those at graduation ceremonies in years past.

“As seniors we’ve lost opportunities for good memories together,” said valedictorian Jodie Aguirre, as the rain began to fall. “We, the class of 2020, will still keep moving forward and fulfilling the dreams we had.” 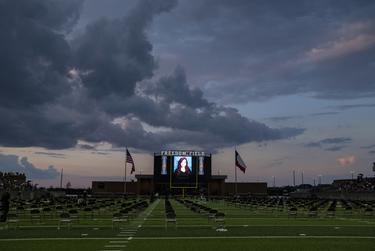 The storm clears after the the graduation ceremony has ended. May-Ying Lam for the Texas Tribune