Published: March 26, 2020, 3:33 pm
Tags:
Politics
Marco Lopez works with La Union Del Pueblo Entero, L.U.P.E. He installs a megaphone on to his vehicle to drive around local colonias, unincorporated neighborhoods that lack basic services such as street lights, proper drainage, paved roads or waste management. Due to the recent coronavirus outbreak, they can't visit residents in person to remind them to fill out the census form. Verónica G. Cárdenas for The Texas Tribune

Martha Sanchez wants to bring her neighbors out of the dark.

There are no street lights in some of the Rio Grande Valley's colonias, and nightfall brings darkness to many of these impoverished pockets of Texas — home to more than 400,000 Texans, almost all Hispanic, living in abject poverty — that lack many basic public services. Sanchez, a longtime community organizer, is trying to get these people to respond to the once-a-decade census, reasoning that if they are recognized and counted, help may follow.

“If we push people to be counted, then we know we are bringing more money to the county, and we will have more leverage to work the county to make sure they allocate money for these colonias that need light so badly,” said Sanchez, who works for La Unión del Pueblo Entero, a nonprofit organization that supports low-income neighborhoods in the Valley.

But restrictions on movement born of the new coronavirus pandemic have turned out the lights on many of the plans Hidalgo County and its neighbors in the historically undercounted region devised to ensure an accurate count. Now they're improvising day by day, trying to adapt to rapidly changing circumstances.

Three years planning for in-person outreach efforts — knocking on doors, visiting schools and businesses and large community events — were scrapped to comply with federal guidance for people to maintain safe distances from one another and state orders limiting public gatherings.

The county-led effort started morphing into a digital campaign that emphasizes encouraging people to fill out the census online. But neighborhoods without street lights often also don't have internet access, so organizers tried borrowing a tactic common in Mexico — heading out with megaphones and speaker systems strapped to the back of trucks or atop cars to prowl the streets of colonias broadcasting their message: Please fill out the census. 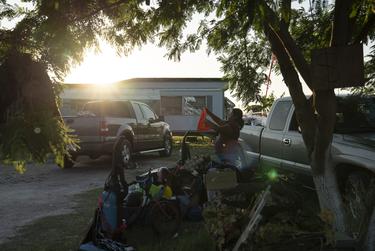 Lilian Ruiz lives in Edinburg and states that she called the census hotline to have her family counted. Verónica G. Cárdenas for The Texas Tribune

Now even the mobile outreach will be blocked under new restrictions taking effect. So organizers are setting up phone tree lists, starting with locals already on their contact sheets and hoping every person they call will reach out to 10 more of their family and neighbors.

“We don’t have a lot of options in reality, especially with people in the colonias,” Sanchez said.

The scramble in Hidalgo County reflects efforts in other parts of the state where meticulous planning for the high-stakes count was derailed by the closures and distancing brought on by the pandemic. Salvaging efforts to get a complete count are crucial for the state’s social, political and economic future. The census serves as a roadmap for hundreds of millions of dollars in federal funds Texas gets every year, and for how communities are built. It determines everything from whether early childhood programs will have enough money to where new grocery stores open.

The pandemic is making counting in Hidalgo — which is disproportionately home to Texans who were already at the highest risk of being missed and where 92% of residents are Hispanic — particularly challenging.

Most Texas households by now have received invitations in the mail from the U.S. Census Bureau, asking them to fill out the short questionnaire online or by phone. In portions of Hidalgo County, though, those invitations and paper questionnaires were supposed to be dropped off in person by census workers for residents of some colonias and in small cities where every household uses P.O. boxes, which the bureau does not mail to.

It’s unclear how many, if any, questionnaires were delivered in Hidalgo County in the short window between when counting began earlier this month and the bureau suspended its field operations on March 18. (The agency did not respond to questions about the drop offs.)

The county has enlisted mayors of those towns to record public service announcements encouraging their constituents to respond by phone.

“That’s really all we can rely on at the moment until we hear more,” said Nestor Lopez, an economic development analyst for the county who has been leading its expansive outreach endeavors.

Teaming up with more than 80 partners, including school districts and large employers, the county has had to go at it without any state support. Republican state lawmakers last year refused to put any money toward outreach efforts, even as other states like California shelled out millions of dollars to encourage participation in the census.

Left: Marco Lopez, who works with La Union Del Pueblo Entero, L.U.P.E., drives around a colonia in Mission announcing through a megaphone in Spanish, “Census, census! Count yourself in the census by phone or on the internet! Don’t forget, count yourself in the census!” Right: Colonias are unincorporated neighborhoods that lack basic services such as street lights, proper drainage, paved roads or waste management.

With local funding and philanthropic support, Hidalgo County had planned various large community events — one at the largest hospital in the region and another at a public library in McAllen, for example — knowing that in-person interactions were crucial to getting their numbers up. The plan was to have computers on hand, with some set up outside in the parking lot.

Every person missed in the census translates into lost dollars, and mistakes can’t be easily corrected for another decade. Hidalgo County was among the first to start preparing for the 2020 count, seemingly rattled by a prolonged legal fight after the 2010 count over what they saw as a dramatic undercount of the region.

The bureau has already extended the end of counting for the census from July 31 to Aug. 14. But Lopez is hoping for more.

“Everything has changed so much,” Lopez said. “All we can really hope for is for this to be postponed even longer and hope this virus is contained so we can still at some point — whether that be in three months, four months, maybe even half a year — where we can still execute some of this.”

In the meantime, they’ve turned to groups like Sanchez’s, who Lopez refers to as their “boots on the ground,” to help with residents who are among the hardest to reach. But those efforts have proven to be precarious.

Organizers with La Unión del Pueblo Entero had been knocking on doors for a month, effort halted last week over concerns about spreading the virus. Soon after, the organization dipped into the network it had created through the wide range of events it typically hosts for low-income communities — housing and health fairs, rallies and talks about workers’ rights — to launch its phone tree list. They tried to quickly ramp up their megaphone efforts so they would center on colonias where the organization had less of a footprint.

The megaphone efforts were also supposed to extend into neighboring Starr County. That’s where car salesman Tomas Sanchez, who moonlights as a community organizer, on Tuesday was preparing to go out into the colonias, loading his karaoke machine into his truck to play a census message he recorded in Spanish on his phone.

It fits in with what he described as a “campaign of conscience” to encourage people to respond to the census, even if they are undocumented, so the region doesn’t lose out on funding and representation.

“If people don’t allow themselves to be counted for the census, then they don’t count to the federal government,” Sanchez said in Spanish. But his efforts were derailed when a stay-home order was issued for Starr County.

Sanchez recognized the fluidity of the situation at the start of the week; the first known case of coronavirus in the county was announced Saturday night. By Tuesday, the count was up to seven. That day, Sanchez readily admitted she wasn’t sure how long the broadcasting efforts in colonias would last so she was asking organizers to spend as much time as they could in the field in the first half of the week.

The Census Bureau had started releasing early response numbers, and the response rate in Hidalgo County continued to trail the state average.

“We’re trying to work against time,” Sanchez said as she watched the list of cities and counties ordering their residents to stay home steadily grow. “We don’t know how long we’ll be able to do this effort.”

By Wednesday afternoon, Sanchez and her team got word that a similar order was coming down for Hidalgo.

The order goes into effect at 11:59 p.m. Thursday, and the sound trucks will vanish by nightfall.