Published: February 14, 2020, 12:01 am
Tags: Politics
“In Texas, foreign policy and national security is a kitchen-table issue because everyone has someone [they know] in uniform,” says MJ Hegar, a Democratic candidate for U.S. Senate. Miguel Gutierrez Jr./The Texas Tribune

On the same evening Iran fired at least a dozen missiles at an American base in Iraq last month, MJ Hegar was holding court at a meet-and-greet in Austin, fielding a question about U.S. forces’ killing of Qasem Soleimani, which prompted the attack.

Hegar, who served 12 years in the Air Force, held the crowd captive as she responded, invoking the U.S. withdrawal from the Iran nuclear deal, the hollowing out of the State Department by the Trump administration and the erosion of congressional war powers.

Afterward, Hegar acknowledged foreign policy issues are not always front and center in state elections — but she argued that they should be.

“In Texas, foreign policy and national security is a kitchen-table issue because everyone has someone [they know] in uniform,” Hegar said in an interview. “We have a lot of bases, a lot of veterans, a lot of active duty, a lot of Guard and Reserve.”

Hegar believes her military experience has readied her for a fight to win the Democratic primary and then take on U.S. Sen. John Cornyn, who is expected to easily win his own primary. She's battle tested — literally on the battlefield, but also through other challenges she faced as a woman serving her country.

As the primary has unfolded, Hegar has been almost exclusively focused on Cornyn, eager to paint a contrast between a staid career politician and an “ass-kicking” veteran and mother. But before she can get there, she has to get past March 3, when she is on the primary ballot with 11 other Democrats in a contest that remains deeply unsettled.

That is even as Hegar has accrued considerable advantages over her primary rivals, including the backing of the Senate Democrats’ official campaign arm.

To be sure, Hegar is not the only veteran in the Democratic field — there is also a lesser-known candidate, Victor Hugo Harris, who served in the Army — and she has not been alone in tackling issues like the Soleimani killing. But more than any other candidate, Hegar is staking her appeal on military service and its bipartisan resonance in a state like Texas.

It is not a bad bet, according to admirers who watched her unexpectedly competitive bid in 2018 for the 31st Congressional District, which touches Fort Hood.

"It was just magic," recalled Chris Rosenberg, chairwoman of the Bell County Democratic Party. "The candidate was perfect for Bell County, where we have so many veterans here. We would talk to people, and all we would have to say is 'Purple Heart combat vet,' and we got in the door."

Air Force veteran MJ Hegar served three tours in Afghanistan as a search-and-rescue pilot, and in 2009, she saved the lives of her passengers after the Taliban shot down her medevac helicopter. She subsequently received the Purple Heart and the Distinguished Flying Cross with Valor.

Hegar is, of course, best known for the heroism that earned her that Purple Heart in 2009. She was on her third tour in Afghanistan when the Taliban shot down an Air National Guard medevac helicopter that she was co-piloting. Despite being hit in the arm and leg, Hegar returned fire while clinging to a moving helicopter, saving the lives of patients and crew members.

As Hegar sought to advance her military career, she unexpectedly ran into the Combat Exclusion Policy, which prohibited women from serving in ground combat units. In 2012, the American Civil Liberties Union reached out to her about joining a lawsuit challenging the policy — and she did not hesitate to sign on. 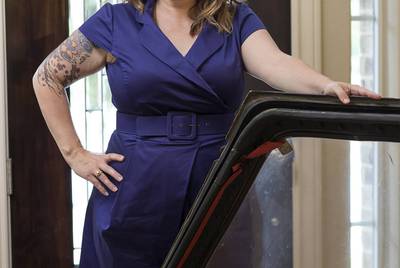 When Hegar left the military, she was given the door of the helicopter she was shot down in. Bob Daemmrich/BDP, Inc.

The courts ultimately did not settle the issue. But in 2013, then-U.S. Defense Secretary Leon Panetta reversed the ban, in no small part due to the pressure brought by Hegar and her fellow plaintiffs.

Along the way, Hegar met fellow advocates like Ellen Haring, a retired Army colonel and expert on gender in the military. Haring described Hegar as “tenacious.”

“She’s not gonna let something go,” said Haring, who did not initially think Hegar would get involved in politics but saw a familiar quality when she rebounded from her close loss to Carter. “A lot of people after one round would quit.”

Hegar’s bravery in Afghanistan and advocacy for women in combat have become well-known chapters in her life story. But there are lesser-publicized aspects of her time around the military that are also fueling her persistence.

While stationed at Whiteman Air Force Base in Missouri, she was assaulted by a military doctor who insisted on conducting her gynecological exam despite not being qualified to do so, she recalls in her 2017 book, “Shoot Like a Girl.” The doctor, who had demanded Hegar comply or “kiss being a pilot good-bye,” quickly told a superior what he had done, and Hegar was asked if she wanted to press charges. She said no, trusting that the military would hold him accountable on its own.

But a few months later, she realized her trust had been misplaced: She ran into the doctor at an awards banquet where his military career seemed anything but hindered.

Hegar left the Air Force less than a month later, but the experience stayed with her. She struggled with whether to bring up the assault in her book but decided to do it to raise awareness for a problem that too often does not see the light of day.

Ninety-nine percent of the men she served with were "amazing," she said, but "the problem is the culture of silence around that 1% that are offenders."

The experience is "why I have such a passion for taking on powerful people who exploit the people that they're supposed to be helping and for the importance of transparency and oversight and accountability," she said. "Because I trusted my chain of command to take care of that. They told me they would, and they let me down."

When she was 4 years old, Hegar had come face to face with another assault, watching her abusive biological father push her mother through a plate-glass door.

Years later, such scenes from Hegar’s life would be on vivid display in “Doors,” the viral ad in Hegar’s 2018 congressional campaign that vaulted her on to the national political stage. She raised $750,000 off it in just 10 days.

Hegar ended up losing to U.S. Rep. John Carter, R-Round Rock, by 3 percentage points. But she drastically moved the needle for Democrats in the district and laid the groundwork for it to become a national party target this election cycle.

It also gave her a template for her next uphill political battle: running for Senate.

Hegar was among the first serious candidates to enter the Democratic primary to challenge Cornyn, launching her campaign in April 2019. But she was not the last, and the field ballooned to 12 candidates by the filing deadline, auguring a complicated path to the nomination.

Throughout the primary, Hegar has paired her military-based appeal with a relatively moderate profile. On health care, for example, she supports a Medicare buy-in option rather than a single-payer overhaul like "Medicare for All," boosted nationwide by progressives like Bernie Sanders and Elizabeth Warren.

However, Hegar has been blunt about centering her strategy on appealing to voters’ hearts over their heads.

“A third of the state is not that interested in policy nuance,” she told a group of Dallas Democrats last summer. “They want to see toughness, they want to see somebody who’s gonna go and fight for them, not fight to pad their own resumes.”

Hegar got her biggest boost yet in December, when the Democratic Senatorial Campaign Committee endorsed her. The intervention drew bitter criticism from some of her primary opponents, with the campaign of Cristina Tzintzún Ramirez calling the endorsement “tone-deaf to the diverse Texas electorate” and another, Royce West, declaring it a “slap in the face” to black Texans.

To her earliest supporters, the endorsement was a validation of the general election-focused campaign she has been running from the get-go.

"MJ Hegar has been taking the fight directly to Sen. Cornyn," said Patrick Burgwinkle, a spokesman for End Citizens United, a national Democratic group that pushes for campaign finance reform. "That puts her in the best position to win the primary and the general election in November."

Whether Hegar wins the primary, however, remains an open question despite all the national firepower she has received. Polls show many voters are still undecided, and while Hegar has registered slight leads, no candidate has split away from the pack.

Unsurprisingly, in the homestretch before March 3, Hegar and her allies are leaning hard on her military service — and the notion of toughness that comes with it. The national veterans group VoteVets is airing $3.3 million in TV ads branding her as “Texas tough.” And her campaign’s first TV ad — titled “Carpool” — jointly highlights motherhood and the military, showing her using a helicopter to take her kids to school.

“This campaign is a fulfillment of that oath that I took,” Hegar said at the Austin meet-and-greet. “And I’m asking you tonight to sign up with me — I’m calling you to service like when I put on the uniform.”