Video: JJ Watt returns from Bahamas, and this reunion with his pups is pure love

Vanessa Wilson’s white Chevy SUV has sat untouched on the patch of land outside her family’s trailer in Austin for months. It’ll be there for a while.

Drenched with water three months ago after she accidentally left the sunroof open, the car’s electrical system is shot, along with her two-year Lyft gig, which she relied on to pay the bills.

Wilson is the sole breadwinner for her two children, including Najaia “Jaja” Free, her 10-year-old daughter, whose type 1 diabetes requires constant supervision and a diet of healthy foods. As she tries to secure the thousands of dollars to fix her car, she’s set up a not-quite-yet lucrative business from home and is relying on the Supplemental Nutrition Assistance Program, formerly known as food stamps, after not needing it for years.

“Food stamps have enabled us to be able to eek by while we're figuring out what we're going to do next,” Wilson said.

But earlier this month, the Trump administration approved the first in a series of proposed changes to restrict access to the federal food safety net. Wilson is among thousands of SNAP recipients who, if cut from the program, don’t know how they’d be able to afford their groceries.

As of November, Texas distributed more than $4.2 billion in federal money to an average of 1.5 million people — about $261 per person.

The rule that passed this month won’t affect Texans in the short term, but a second rule coming down the pipeline could kick at least 125,000 Texans off SNAP.

The most recent rule change, which goes into effect in April 2020, is estimated to cut benefits for a roughly 700,000 Americans. The change would make it harder for states to waive the federal program’s work requirements in areas of high unemployment. Under current law those unable to work 30 hours a week can only receive SNAP benefits for three months out of every three years. States who use the waiver can forego that three-month limitation, according to food policy experts.

Texas hasn’t used the waiver for at least six years. In an effort to limit usage, state officials decided an area’s unemployment rate has to be at 10% or higher to use the waiver, a threshold that doesn’t currently apply to any Texas counties, said Rachel Cooper, a senior policy analyst with the Austin-based Center for Public Policy Priorities, a left-leaning think tank.

The rule Texas experts are most worried about — because it could impact about 125,000 Texans, is still under review. Though SNAP is funded through the U.S. Department of Agriculture, it’s up to states to determine eligibility — like income level and car value — and distribute aid as needed. This change would implement countrywide standards. 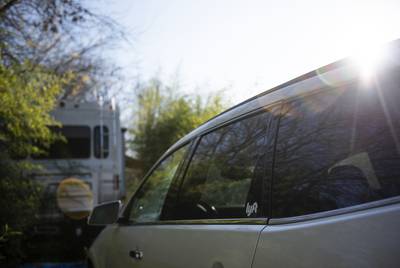 After accidentally leaving the sunroof of her SUV open, the electrical system of Wilson’s car, which she used to drive Lyft, was shot. She now has to borrow her neighbors’ cars to pick up groceries and run errands. Eddie Gaspar

Assets like cars are also taken into account when determining eligibility. Under Texas law, SNAP participants cannot own a car that is valued at more than $15,000. If the proposed rule change goes into effect, that number would drop to $4,650.

“Congress never bothered to update those limits since they gave states flexibility to do it,” Cooper said.

Trinity McKeaver, a SNAP recipient in Houston, drives a 2006 Jeep to her daycare job every day.

Without her car, McKeaver said she wouldn’t be able to keep her job. The bus line isn’t as accessible in the outskirts of Houston, she said. At least $20 each way, Ubers are too expensive. The only job she could walk to would be local fast food joints. McKeaver doesn’t think having a more reliable vehicle should be the reason they can’t afford groceries.

“I don’t see the correlation between, ‘I have a car worth this much and I need food,’” McKeaver said.

To get a car in the $4,650 price range it would have to be used and about 10 years old or older, according to leading car websites.

Cooper said requiring SNAP recipients to have older cars, which are often less reliable, will only make it harder for them to find reliable work.

That’s where Wilson is now, back on SNAP because of her busted car.

SNAP benefits cover about half of the Wilson household’s grocery budget, which consists mostly of whole foods like chicken, fruits and vegetables to accommodate her daughter Jaja’s diet. For the most part the family tries to eat the same thing, they wouldn’t want Jaja to be left out, but healthy eating coupled with the 10 and 12-year-old eating more each day, gets expensive, Wilson said.

“Each of them out eats me,” Wilson said.

The administration is also mulling other changes related to how various housing expenses like heating are calculated into SNAP eligibility.

The proposed changes from the Trump administration are meant to close loopholes in current law, and encourage non-disabled people to get jobs and cut back program spending, U.S. Secretary of Agriculture Sonny Perdue has said.

But food policy experts say taking away people’s access to food will not push them to work.

“Data suggests the opposite,” said Celia Cole, CEO of Feeding Texas, a statewide network of food banks, adding that most people on SNAP are either already working, or got on the program because of loss of earning or employment.

“But we can’t provide all those meals overnight,” Cole said. “This rule would cause immediate suffering.”

Disclosure: The Center for Public Policy Priorities has been a financial supporter of The Texas Tribune, a nonprofit, nonpartisan news organization that is funded in part by donations from members, foundations and corporate sponsors. Financial supporters play no role in the Tribune's journalism. Find a complete list of them here.