KATY — Beto O'Rourke said Tuesday his biggest political focus next year in Texas will be flipping the state House, offering the most detail yet on his 2020 plans since ending his presidential campaign last month.

"Everything flows up from that," said O'Rourke, the former El Paso congressman and 2018 U.S. Senate nominee. "So not only could Democrats gain control of the House and make progress on stormwater infrastructure, health care, gun violence, climate and education, but that will incidentally help the federal races — from U.S. Congress to U.S. Senate — and I also think it’s also going to lay the groundwork for whoever the presidential nominee is."

O'Rourke pointed to his near-miss 2018 loss, when he said the work that he and state House candidates were doing "all reinforced one another and complemented the efforts and produced historic turnout, and we need something like that this time."

O'Rourke spoke with reporters here from The Texas Tribune and Houston Chronicle while in town to campaign with Eliz Markowitz, the Democratic candidate in a special election runoff next month for a Texas House seat that Democrats are trying to flip. He said it was his first time back on the campaign trail since returning to El Paso after dropping out of the presidential race on Nov. 1.

O'Rourke has remained politically active in recent weeks, re-emerging in Markowitz's race — he first stumped with her in September — and wading into a few other down-ballot races, including picking sides in two intraparty contests. He backed Lorraine Birabil over fellow Democrat James Armstrong in the special election runoff next month to replace ex-state Rep. Eric Johnson, D-Dallas. And he quickly endorsed Sima Ladjevardian, a former campaign adviser, after she made an 11th-hour entry last week into the primary to challenge U.S. Rep. Dan Crenshaw, R-Houston. 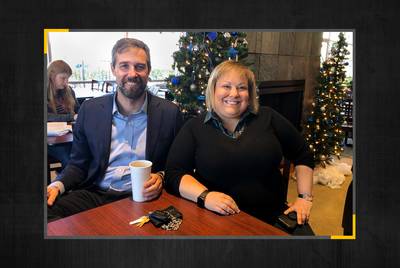 O'Rourke told reporters he is open to endorsing in additional competitive primaries but is "certainly going to get behind the nominee in these races once they're settled in March." He said he was not worried about alienating members of his own party "because we won't be attacking other Democrats" in contested primaries.

One primary that O'Rourke continues to say he will not get involved in is the one for U.S. Senate, which has drawn a dozen candidates and saw a major development Monday when the Democratic Senatorial Campaign Committee endorsed one of them, MJ Hegar. O'Rourke said Tuesday he was excited about the options and looking forward to hearing more from them, noting many voters have yet to tune in, but reiterated he did not plan to intervene in the nominating contest.

"I'm still making up my mind in terms of who I would vote for, much less endorse or support, but [I'm] not planning to get involved before the primary's decided," O'Rourke said.

O'Rourke acknowledged that supporters asked him to run again for U.S. Senate after he ended his White House bid, with the backers emphasizing the impact he could have up and down the ballot. But he said he was "just convinced that out of that extraordinary field we have, someone's gonna emerge and inspire us and be an incredibly formidable opponent towards John Cornyn and help these down-ballot and other races."

Markowitz, a Katy educator, is in a Jan. 28 runoff against Republican Gary Gates, a self-funding businessman, for the seat that was vacated earlier this year by former state Rep. John Zerwas, R-Richmond. If Democrats take the seat, they could effectively pull within eight seats of capturing the House majority next year.

Markowitz got 39% of the vote in the November special election to 28% for Gates, who had to compete with five other Republicans. Markowitz expressed optimism Tuesday that she could overcome the vote breakdown in the first round — 39% Democratic, 61% Republican — to prevail in the runoff.

“I think that any time you have seven candidates vying off for a single race, it’s going to lead to different factions of friends and family coming out to vote for a single person, not necessarily the most representative based on party or affiliation, and so by having it just be me versus Gates in this runoff, we’ll be able to consolidate a lot of our voters in the Democratic base," she said. "We’re also expanding our universe to make sure that we reach more Democratic-leaning individuals who we didn’t touch the first time around and make sure that they actually turn out to the polls."