Inside the 2020 Oscars After-Parties: From Celebrity Run-Ins to Lots of PDA!

After Parasitemade history with a Best Picture win at the 92nd Annual Academy Awards, the night was far from over! A-list winners, nominees, and guests quickly headed to the after-parties in their glam looks to keep the party going.

From sweet family moments to steamy PDA, the stars really let loose. ET was at some of the most exclusive Oscar parties and here's what went down when the cameras went off!

Governors Ball in the Ray Dolby Ballroom at the Hollywood and Highland Center:

Fresh off their Oscar wins, some of the night's biggest stars attended the Governors Ball to get their golden trophies engraved.

Laura Dern made it a family affair with her mother, Diane Ladd, and her kids, Jaya Harper and Ellery Harper, and her stepson, Charles Joseph Harper, at the event. She gushed to ET's Nischelle Turner just before entering the soiree, saying of her emotional speech, "I got to pay tribute to these amazing, amazing people in my life and it was a beautiful gift."

Her mom, Diane, added, "I'm so proud. I'm not only proud because she deserved this award, but because she's a great human being. I'm proud of the gift the universe gave her and how she uses it."

Inside the event, a glowing Renee Zellweger was photographed looking lovingly at her Best Actress statue after it had been freshly engraved. She was later seen embracing Judy director Rupert Goold with her Oscar in hand.

Brad Pitt was also all smiles as he waited to see his name on his first acting Academy Award. As he entered the area to get his trophy engraved, someone was overheard yelling to open the door for him and clear a path for his arrival. With the pressure of the show gone, Pitt enjoyed some of the gourmet after-party food, which was catered by Wolfgang Puck. Some of the food options included salmon cut in the shape of Oscar statues, golden chocolate Oscars, fried chicken and waffles, a decadent salad bar, caviar-topped tater tops, mini tacos, margarita push-pops, and more.

Meanwhile, a few tables over from Pitt and Leonardo DiCaprio, an eyewitness spotted Rita Wilson and Tom Hanks sitting at a table with the actor's son, Colin. The after-party was filled with relatives as DiCaprio spent some of the evening with his dad, George DiCaprio, while drinking a glass of white wine and chatting.

Following his win, John brought his Oscar back to the party and performed at the piano.

While at the event, ET's Lauren Zima spoke to some of the Fab Five about what they thought of actress Meghan Markle and Prince Harry's recent royal departure. British star France joked, "I'm happy for them. I get it. I really get it. I'm here!"

Inside the event, an eyewitness spotted Aisha Tyler, who was wearing flats, kissing and hugging pal Colton Haynes, who looked dapper in a Dior suit. Haynes' date for the evening was his actress friend, Ally Maki.

After turning heads at the Oscars, Billy Porter changed into a bright purple Christian Siriano off-the-shoulder top with feather details and a train so lengthy it required a handler. He paired the look with elbow-length purple gloves, a matching wide-brimmed hat, fitted lilac pants and a black purse that read, "F**k U Pay Me!"

Porter was later spotted sipping a cocktail at the bar, and posed with two fans who came up for photos.

I heard there were some #Oscars2020 afterparties. You know I had to do a quick ball change in to this custom @CSiriano beauty & get to all the fun. Hat by @sokolmillinery. Bag by @thesepinklips designer of @Pat_Field ART fashion. Style by @sammyratelle Photo by @Santiagofelipe 💅🏿 pic.twitter.com/iHzofyNW4K

Singer Andy Grammer and his pregnant wife, Aijia Lise, entered the party together and she was not feeling her footwear. "These heels!" Lise was heard exclaiming. She was later seen enjoying some well deserved dessert.

G-Eazy had a flirty night out. The rapper was spotted hanging in the corner of the smokers room, and appeared to be flirting with a woman wearing a sparkly black dress. As they went to say goodbye, the two kissed one another on the cheek.

Vanity Fair After-Party at the Wallis Annenberg Center for the Performing Arts in Beverly Hills:

Following a 5 p.m. dinner prepared by Frenchette, New York, and a viewing party of the awards show, after-party guests began filing in around 8:30 p.m.

Mindy Kaling brought her friend and former Office co-star, BJ Novak, as her date to the event, and they posed in the photo booth together. Changing out of her bright yellow awards show look, Kaling opted for a plum-colored strapless gown for the after-party.

Vanessa Hudgens also sported a bold purple, sexy satin number with a deep v-neck. The Bad Boys For Life star took full advantage of her lengthy train, flinging it in the air like she was doing a ribbon dance.

After performing an emotional cover of "Yesterday" during the In Memoriam segment of the Oscars, singer Billie Eilish showed up to this soiree and posed in the famous Vanity Fair portrait booth for an edgy video.

Sarah Paulson and Holland Taylor also posed for a portrait session together, both looking stunning. Prior to their Instagrammable moment, they walked the after-party red carpet together, laughing and looking lovingly at one another. Paulson rocked a black sequin gown with a large white collar and feather cuffs while Taylor sported a black suit with hot pink trim.

The 2020 #VFOscars Party portrait studio by @MarkSeliger is officially open—and Holland Taylor and Sarah Paulson are here to kick it off.

Tiffany Haddish was also at the party and told ET that she had plastic wrap underneath her black gown that was holding everything together.

The Sprouse twins were out in full force at the event, and posed together on the carpet. Dylan Sprouse also posed with his girlfriend, Barbara Palvin. Though Cole Sprouse and his Riverdale co-star and girlfriend, Lili Reinhart, both attended the after-party, they chose not to pose together. Reinhart even did a solo portrait video for Vanity Fair.

Cole told ET's Keltie Knight that he thought the Oscars were "incredible, as always." He also dished that he's seen Cats "twice" and plans to see it a third time.

Speaking of solo, Hailey Bieber wowed on the red carpet without her husband, Justin Bieber. The model dazzled in a sheer black gown with a thigh-high slit and an edgy bob haircut.

Of course there were plenty of couples packing on the PDA on the red carpet. Adam Levine and Behati Prinsloo shared a sweet kiss at the event, while Russell Wilson and Ciara cradled the singer's growing baby bump in a sparkly, draped Ralph and Russo gown. Kim Kardashian West and Kanye West also shared a smooch, as did Chrissy Teigen and John Legend.

The power couple were interrupted by actor Jeremy Renner, who graciously shook Kim's hand on the carpet. Inside the event, she was also embraced by Pitt.

Another A-list couple at the party was Gabrielle Union and Dwyane Wade. The pair held hands and sported matching all-white looks, later posing for a sweet portrait taken by Mark Seliger.

"Whatever she tells me to wear, that's what I put on," Wade told ET.

"Not at all! Not at all!" Union insisted. "He came out, and I was like, 'Oh, that's cute! I didn't realize we were going to match with the lace."

"Well, our stylists, they kind of talked," Wade explained.

"Yeah, it's a revelation for us, not for them," Union agreed.

We ❤️ love at the #VFOscars, and we've got Gabrielle Union and Dwyane Wade showing theirs off in the @MarkSeliger portrait studio. Follow along all #Oscars night for more Vanity Fair Oscar Party shots.

Union was thrilled to escort Wade to his first Vanity Fair after-party. "He retired this year, so I'm excited to have my date back," she mused. "I just wanted him to get the full experience of this Oscars weekend."

Jesse Tyler Ferguson and Justin Mikita were another couple on the red carpet, and gushed to ET about their future child.

"We don't know the sex yet. We're hoping for a human," Ferguson quipped to ET. "It's some time in July, so we're almost at the halfway point... Even when we were dating in the early years, we were talking about starting a family, so it was always something that we wanted to do, but we just wanted to be married for a little while."

Also at the event were Demi Moore and Rumer Willis, who shared a mother-daughter moment on the red carpet.

Reese Witherspoon teased the super exclusive event on Instagram, posting a photo of her white and silver dress. "Only @beyonce could get me out of the house past 11 pm... #oscars 💫," she wrote.

Union commented, "Meet us at the bar!!"

Union and Wade also showed off their second looks of the night, with Union in a neon green embellished blazer mini-dress and Wade in another all-white suit.

"We may or may not include the dog in our after-party adventures," Union captioned the pic with her husband and their pet.

We may or may not include the dog in our afterparty adventures.

Kylie Jenner also slipped into a second after-party look, transitioning from her navy Vanity Fair ensemble into a red off-the-shoulder gown. She attended the event with her sisters, Kim, Khloe, and Kourtney Kardashian, as well as her ex and baby daddy, Travis Scott.

Jenner posted several videos with her family and Scott on the way to the party.

Kylie with Travis, Khloe, Kourtney and Cooper after the Vanity Fair party

Celebs had lots to talk about after another exciting Oscars! Here's a look at some of the most memorable moments! 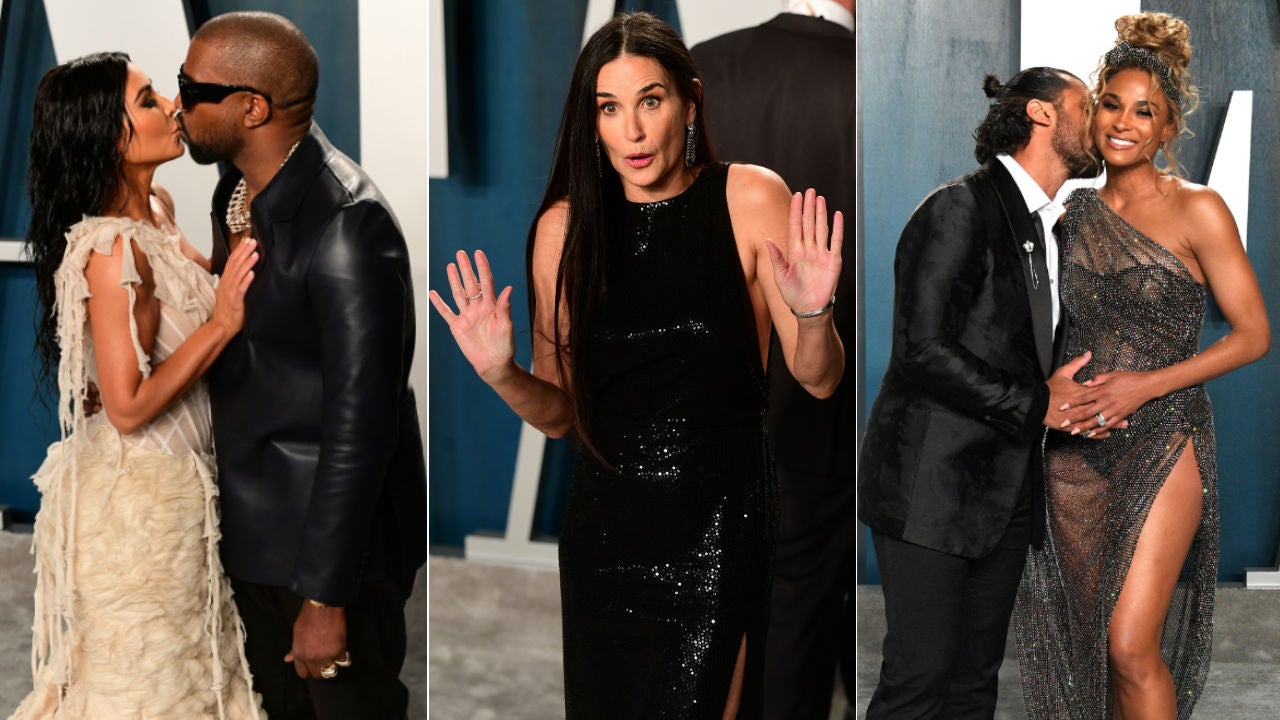