Ryan Murphy on 'Hollywood,' Rewriting the Past and Finally Working With Holland Taylor (Exclusive)

Ryan Murphy has a passion for the past -- whether it’s revisiting the making of What Ever Happened to Baby Jane? starring Bette Davis and Joan Crawford (Feud), chronicling the lives of gay men during the HIV/AIDS crisis (The Normal Heart), reexamining the events around the country’s biggest media scandals (American Crime Story), or exposing the masses to the underground world of the 1980s ballroom scene in New York City (Pose). His latest project, Hollywood, is no different.

The star-studded limited Netflix series created by Murphy and Ian Brennan follows a group of aspiring actors and filmmakers -- Jack (David Corenswet), Raymond (Darren Criss), Archie (Jeremy Pope), Camille (Laura Harrier) and Claire (Samara Weaving) -- trying to make it during the Golden Age of Tinseltown, no matter the costs or setbacks they face. The lives of these fictional characters unfold alongside the real-life events and personalities that helped define Hollywood at the time: the rise of leading man and closeted actor Rock Hudson, the struggles faced by actors of color Anna May Wong and Hattie McDaniel, the notorious but ignored backroom dealings of agent Henry Willson, as well as the lore of Peg Entwistle’s suicide, director George Cukor’s legendary private pool parties and Scotty Bowers’ gas station dalliances with stars of every kind.

But since this is Murphy’s version of history, Hollywood gets a rewrite. “I was always just so sad about how they were treated and the injustice of their situation,” he tells ET about growing up on the films and personalities of that era and becoming fascinated with the likes of Hudson, McDaniel and Wong.

To Murphy, there was a sense of real shame that came with people trying to project something that they weren’t and fitting into Tinseltown’s very limiting mold of success, which manifested into the main crux of the show: “What if you could be who you were unapologetically and you could have done it back then? How would that have changed the world, and does it?” he muses.

The end result is a love letter to a time and place and the people whom Murphy has always been so moved by in his life. Not only do Hudson, McDaniel and Wong get a chance at a happy ending, but an industry plagued by ageism, homophobia, misogyny and racism has the opportunity to set a new course for itself.

While the nature of the series may seem idealistic, it’s not blindly ignorant of Hollywood’s many systemic issues that are still a problem today. In fact, many of Murphy’s own experiences of pushing back against the decision makers and always trying to work gay story lines into his earlier projects punctuated the challenges that unfold on screen. “I have found myself in many situations being opposite that desk and saying, ‘Well, why? You don't know anything until you try to make it,’” he says. “All of those things were sort of in the water when I was creating it; I was interested in those questions.”

And now that Murphy is a six-time Emmy-winning writer, director and producer, with a proven track record of hits and a multimillion-dollar deal with Netflix, he’s very much on the other side of the desk. “For better or for worse, I am somebody who has the power to get things made now,” he says, admitting that he’s lucky enough to be “in this rare position where I get to write and create, and then people say yes to things.” (For Murphy fans, that also extends to lending his name and executive producing to documentaries like A Secret Love and Circus of Books.)

Not only does Murphy have the power to get things made and to shine a spotlight on stories that otherwise would have remained in the dark, he also has the near flawless instinct of finding the inexplicably right person for the part. What he’s done for Jessica Lange and Kathy Bates with American Horror Story or Darren Criss and Sarah Paulson in their respective seasons of American Crime Story, Murphy has done here for Jim Parsons and Holland Taylor, two of Hollywood’s veteran cast members making the most of their unexpected roles.

For Parsons, it’s what Murphy calls his “Mary Tyler Moore moment,” as the former Big Bang Theory star steps into his first villainous role after 12 seasons on the CBS sitcom. In Hollywood, he portrays Willson, who wields his power and influence over unsuspecting young and aspiring actors, like Hudson, and preys on their sexuality.

“When we were coming up with this part, from the very beginning I thought you needed a brave actor and you also needed somebody that was a surprise to you,” Murphy says. “So right from the beginning, when I wrote it, I thought that Jim Parsons would be interesting in this part because you wouldn't see it coming.”

Indeed, it’s an unexpected move from the actor, who was nervous about saying yes at first, “but the role was so good,” Murphy continues. “I think he said yes because he just thought the role was so fascinating.”

And then there’s Taylor, who is a longtime friend of Murphy’s and is dating his best friend and longtime collaborator, Paulson. On the show, she plays studio talent manager Ellen Kincaid, whom Taylor describes as a “professional woman who was worldly and could speak to anyone and could socially manage herself in any company who was intelligent, who had moxie but who had charm.”

“I've spent many, many Thanksgivings with Holland; I've had many nights with Holland. And I never wanted to go to her unless I had a part that was challenging,” Murphy says, revealing that he wrote the part for her but didn’t tell her in advance. “I kept wanting to say, ‘I've got something good coming for you.’” (“That’s very sweet of him,” Taylor says later, adding, “It was a role that I couldn’t turn down, but I wouldn't want to turn Ryan Murphy down for anything.”)

Ultimately, Murphy was interested in presenting a different side of Taylor, whose longtime TV work, from Bosom Buddies to Mr. Mercedes, spans decades. In the show, “there are so many emotional, moving scenes and sexualized scenes. And I know that it was a challenge for her to do them,” Murphy says. “And I think it worked because, again, many times actors will say to me, ‘I don't think I can do this.’ And I will say, ‘If I think you can do it, then you can do it. You have to trust me.’”

And not only does she deliver on screen, but Taylor is now both a member of Murphy’s real family and his creative one. “It’s great 'cause now Sarah and I and Holland can go out to dinner, and now Holland and I can talk about sh*t and Sarah is like, ‘Wait, what?’ Which has been the reverse for years.”

Hollywood premieres May 1 on Netflix. 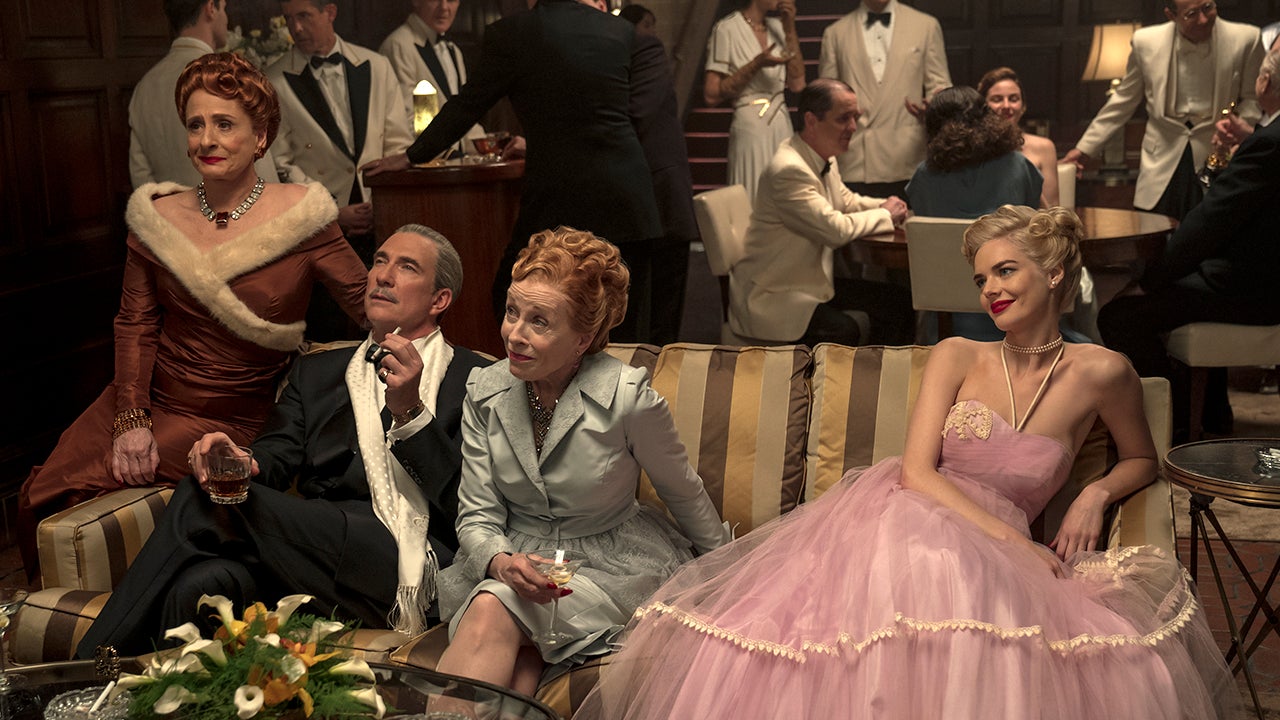