Magician, Ben Jackson grew up in Spring, TX., graduated from Texas A&M University with a BioMedical Science degree and minors in Chemistry and Business.

Jackson has won first place at the World Magic Seminar in Las Vegas, Nevada, has appeared on NBC's TODAY Show performing alongside David Copperfield, has served as the hand double for the actor Joseph Gordon Levitt in the film, "Sin City: A Dame to Kill For" and had a reoccurring guest role on the 2014 season of "Candid Camera" as a magician in disguise, just a few of his many accomplishments to date.

Now, his show "Magic, Music and Mayhem" is currently in its fourth year and you have the opportunity to catch him live. 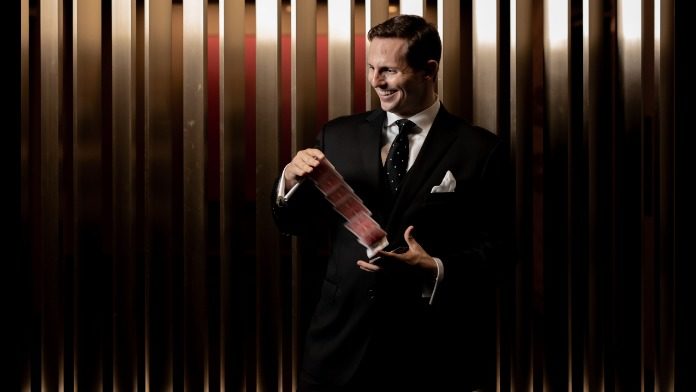 Q: What sparked your journey in magic?
A: A family friend showerd me magic when I was approximately 8 years old after Thanksgiving dinner in Kansas. This was the big that bit that got me interested. It wasn't until I was 15 years old that I started practicing almost every day.

Q: What is your biggest motivation show in and show out?
A: What motivates me is the ability to connect with an audience night after night. When the crowd is with you and all pistons are firing, it makes all of the unseen tens of thousands of hours of practice so worth it. I truly have no idea how the show will go each night. As opposed to a play or a musical, I’m not just an actor on stage reciting lines. The audience plays a crucial part in the show and that is what keeps each performance unique and fresh.

Q: What sets you and your shows apart from other magicians?
A: Unlike other magicians, my magic is never viewed as a game of mental one-upmanship. I never pretend to be the smartest guy in the room. In fact, the show is sprinkled with self-deprecating humor. I simply take the audience on a ride and we get to experience impossible things together. Throughout the show I refer to the audience as team.

Q: What's your favorite part about the job?
A: With information readily available these days, and the smaller and smaller likelihood of something flying in the face experience, magic has become all the more precious and valuable. When was the last time something truly mystified you? That’s the business I’m in. Giving audiences true moments of astonishment, meaningful story-telling, and tons of laughter.

Q: What does training to be a magician look like?
A: As opposed to a musician who can appreciate the sound of his/her own music, or a juggler whose skill is on display with the increasing complexity of flight patterns and number of objects, magicians practice for years to conceal their skill. We work so hard so that you don’t see anything. It’s ironic, actually. When it comes to coming up with new tricks, the formula is simple: think of the end effect first, and then simply work backwards. The effect should always precede the method.

To connect with Ben or for more information, click here.