WACO, Texas – On the door for the McLennan County Republican Party headquarters on a February night, a flyer read, “Black Voices for Trump.” Inside, 50 or so faces — virtually all of them white — looked up at the speaker before them.

“How many of you are tired of being called a racist?” asked the speaker, KCarl Smith, who is Black.

Almost everyone in the crowd raised their hands or nodded solemnly.

Smith, a native of Pine Bluff, Arkansas, who grew up in Alabama, came to Waco in a long-shot attempt to energize support among Black voters for President Donald Trump. Finding none in the audience, Smith spent most of the evening coaching white Republican activists on how to better engage with voters of color.

The meeting was one of a series of events the Trump campaign has held nationwide to chip away at his broad unpopularity with Black voters and flip the narrative that he is hostile to people of color. The president’s reelection campaign has also sought to do that with swag targeted at Black millennials emblazoned with the word “Woke” and by hosting online “Black Voices for Trump Real Talk” events. But it has proved a tall task, given Trump’s racially divisive behavior and tweets since he’s been in office.

Smith said he came to Waco to have “real talk” with Republicans about delivering the message of liberty to people who might not look like them.

“Republicans are terrible when it comes to engaging minorities. I want to show them not only the importance of it, but suggest to them how to do it,” he said. “The party always talks about wanting to be more diverse, more inclusive, but whatever they’re doing they need to stop because it’s not working.”

Reaching a diverse group of voters will grow increasingly important to the party in Texas, where the GOP is overwhelmingly white in a state where the white share of the population is shrinking. And any efforts will face significant opposition from Texas Democrats, who say activating the Black vote is crucial to their November chances. The Texas Democratic Party announced last week that it had launched a joint effort to contact “1.5 million Black registered voters in Texas to promote registration and mobilization.”

For the sake of the Texas GOP’s future, Smith said, party leaders need to do more than just pay lip service to the need to be more representative of their constituents. But in a national cultural moment of intense racial strife, party leaders face serious questions about whether they can make inroads.

The daunting challenge didn’t seem to rattle the February event’s attendees. The crowd included a handful of aspiring congressional candidates and the chair of a local Republican women’s club. But the racial makeup of the room laid bare the party’s numbers problem when it comes to voters of color.

At one point, the chair of the McLennan County GOP lamented, “I invited every Black friend I know, and they didn’t show!”

Smith, the creator of the Frederick Douglass Republican Engagement Strategy, seemed unfazed by the fact that the only other Black person in the room was a reporter. “I need to preach to the choir, because the choir needs to know how to bring in new choir members and sing a new song,” Smith said.

“As our country becomes more colored, we’ve got to learn to talk to people who don’t traditionally look Republican but have those values,” he said.

During his speech, Smith tried to show Texas Republicans how to “trump the race card.” Before acknowledging his wordplay to scattered laughter, he cited Scripture.

“How did Paul the Apostle overcome the negative perceptions that the gentiles had of him?” he asked. “He did good deeds. President Trump has good deeds in terms of the policies that have been passed by this administration and how it has helped the Black community in particular.

“Criminal justice reform? You can’t argue that. President Obama didn’t get it passed.”

The visit to Waco was one that many Trump campaign surrogates have made across the nation — in person before the coronavirus pandemic and mostly virtually since March — as a way to let campaign surrogates of color offer their takes on Trump’s record. Guests at the February meeting discussed ways to engage Black voters — including finding shared values and highlighting the administration’s work to pass the First Step Act, which eased federal minimum prison sentences and retroactively reduced the sentences of people convicted of crack cocaine-related charges, and to direct federal financial support to historically black colleges and universities. (Smith boasted of being a proud graduate of Alabama A&M University.)

Trump himself has made sporadic attempts to reach out to Black voters. In February, his campaign aired a Super Bowl ad featuring Alice Marie Johnson, a Black woman whose prison sentence Trump commuted in June 2018. Soon after, he honored Charles McGee, one of the last surviving Tuskegee Airmen, at his State of the Union speech.

But those moments have in large part been overshadowed by recent events — and Trump’s own words or actions.

“I thought [Trump’s] State of the Union speech was a smooth way to possibly open the door to recruit more Black voters to his candidacy,” said Katherine Tate, a political science professor at Brown University. “Then the pandemic hit.”

Critics have chided his response to the coronavirus, which has claimed a disproportionate number of Black lives. The Trump administration has also responded to protests over police brutality and racial inequality by calling for the use of force and sending federal law enforcement to confront protesters in Portland. That’s in addition to promoting “birtherism” against President Barack Obama, tweeting that four American congresswoman of color should “go back” where they came from, and describing “fine people” on both sides of a clash between white supremacists and counter-protesters in Charlottesville, Virginia.

More recently, after the death of civil rights leader and U.S. Rep. John Lewis, Trump said in an interview with Axios that he “didn’t know Lewis,” a Georgia Democrat, and claimed that “nobody has done more for Black Americans than I have.”

“His support of the Confederate flag has probably stepped on some toes, and his rhetoric has become overheated in terms of trying to cater to a conservative, white audience that might hurt him with Black voters,” Tate said.

The racial disparity is present even in Trump’s own Cabinet, where Ben Carson, the secretary of Housing and Urban Development, is the only Black American. Omarosa Manigault Newman, the onetime White House adviser, was the only Black member of his senior staff; Trump fired her at the end of 2017, and she later claimed in a memoir that Trump is a racist who has used the “N-word repeatedly.”

Meanwhile, the Texas GOP also has its own problems to address. Shortly after George Floyd was killed in Minneapolis police custody, several local GOP leaders in Texas promoted racist conspiracy theories online. The state party has taken some steps to diversify: Allen West, a Black former congressman from Florida, was recently elected chair of the state party. And the party has a number of people of color running in competitive districts, including U.S. House candidate Wesley Hunt and state House candidate Will Douglas, who are both Black.

“While I think Republican candidates need to continue to focus on the principles of the Republican Party, such as low taxation, personal responsibility and limited regulation, I think having a deeper discussion around race could also be meaningful,” said former state Rep. Stefani Carter, R-Dallas, who is Black. 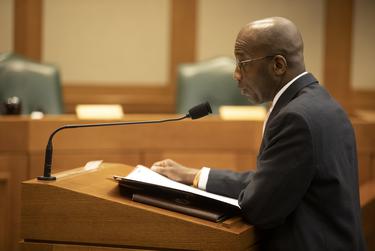 But some in the state GOP scoff at the notion that the problem is with the party. State Rep. James White, R-Hillister, the only Black Republican in the Texas House, said he feels the media holds Democrats and Trump to a “different standard.”

“We had riots throughout the country while Obama was president, and I believe he called rioters thugs,” he said. “My guy refers to them as thugs, and then all of a sudden people think that he’s race signaling.”

White also pointed to the more recent protests that have occurred since Floyd’s death, noting that Floyd, who was pinned to the ground for nearly eight minutes while an officer held a knee to his neck, was killed in a city “run by Democrats.”

With three months before the November election, and statewide polls suggesting a close race between Trump and Biden in Texas, Trump surrogates are playing up Biden gaffes, such as when he said, “If you have a problem figuring out whether you’re for me or Trump, then you ain’t Black.” That comment came during a May interview with Charlamagne Tha God, a host on the radio show “The Breakfast Club.” In July, Biden said that Trump was the first “racist president,” ignoring the fact that past presidents have owned slaves and enforced segregation in the federal government.

Although Smith’s visit took place several months before Biden’s “racist president” comments, Smith sought to preempt such digs by recasting the Democratic Party as the bigoted one.

“If President Trump is a racist, he’s a terrible racist,” Smith said. Democrats, he said, were the ones who opposed President Abraham Lincoln and supported slavery in the South. (That rhetoric has become common in the Trump era, but it ignores the history of how in Texas and the rest of the South, many conservative Democrats switched parties after their former party embraced civil rights legislation.) It’s the Democrats, he told a brimming crowd, who “control the language” and media narrative, which casts the GOP in a bad light.

Political analysts agree that even modestly increasing the Republican Party’s share of Black voters will be a major challenge that small-scale efforts like the “Black Voices” events are ill-equipped to solve. Trump claimed during a 2016 campaign speech that he’d win 95% of Black voters by 2020, but according to a June PBS NewsHour/NPR/Marist poll, 91% of Black adults said they would vote for Biden if the election were held then, compared with just 5% for Trump. 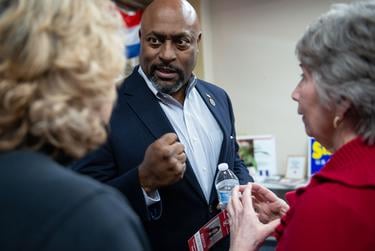 KCarl Smith speaks to Terry McDonald, left, and Pam Archer before a “Black Voices for Trump” event in Waco. Angela Piazza for The Texas Tribune

“The difficulty for a lot of Black conservatives is going into a room where there’s no one that looks like them,” said Marie McClellan, a small-business owner who has lived in Waco for over 20 years. “My husband’s best friend was a Black conservative. We already knew the struggles that people like him were experiencing in any community. We were already aware of that.”

Smith thinks he knows how Republicans can nonetheless make inroads. At the February event, he sold $20 hardback copies of his book, “Frederick Douglass Republicans: The Movement to Re-Ignite America’s Passion for Liberty,” to teach his predominantly white audience how to woo people of color.

“After tonight I’m so pumped,” said Kathy Endres, a white woman who attended Smith’s event and bought copies of the book for herself and her husband. “I feel like I can go out there and make the whole world Republican, but I know it’s one step at a time and it’s not an easy chore.”

The Trump campaign has remained mum on what number, if any, the campaign has in mind for Black support this fall. While he doesn’t need to win a lot of Black voters to win reelection, just moving the needle by a few percentage points could be helpful.

“The effort is there,” Smith said of Trump’s strides with Black voters. “I’d like to see it continue, but there’s always room for improvement.”