Corneilius Shackelford Sr. used to shy away from debates about racism. But when his athletic training work dried up as coronavirus restrictions shut down Texas businesses, he had time to read about the latest incidents of police brutality against black people.

Shackelford, who is black and grew up in Tyler, began learning more about the virulent strain of racism and violence that runs through East Texas history, from 19th century lynchings up to the present day.

Although he’s only 32 years old, Shackelford learned there’s been a Ku Klux Klan rally in Tyler in his lifetime — in 1992, when about 30 Klan members from Waco showed up on the town square, met by about 300 protesters.

In the last few weeks, Shackelford helped create Fight for Justice East Texas, which has been organizing protests in Tyler in the wake of the death of George Floyd, a black man in Minneapolis killed when a white police officer kneeled on his neck for almost nine minutes. The group’s events have drawn 100 to 300 people of all races, most between the ages of 18 and 31.

And Shackelford started to think about how the area’s history connects to his more recent experiences as a black man in Texas: the time a store clerk called the police on him because she thought he looked like a criminal, the many times police have searched his vehicle, the fact that the local school is still named after Confederate leader Robert E. Lee.

“I had to pick my head up from up under the covers. Has this been going on the whole time, and I’ve been not getting involved and haven’t been aware?” Shackelford said.

As protests against police brutality spread beyond Texas’ most populous cities into smaller, conservative towns and national support for the Black Lives Matter movement surges, the new energy in the fight for racial justice has reached East Texas — long seen as a hotbed of white supremacist activity and the venue of some of the state’s most brutal lynchings of black people.

Over the last few weeks, young, often inexperienced organizers like Shackelford in conservative cities and towns like Tyler, Lufkin and Vidor have gathered dozens to hundreds of demonstrators in support of a movement that had previously been associated with larger, more liberal regions of the state.

This wave of organizers trends young, many in their teens, 20s and 30s. Often, they are new to organizing or activism. They’re drawing crowds that are racially diverse, including white and non-black people of color. The new blood is cause for tentative hope for older black activists in Tyler and other towns, many who have long been pushing their city leaders to address major disparities between white and black communities.

“I pray that it’s more than just a march for the moment. I’m praying that it’s going to have an impact for eternity,” said Ralph Caraway, 66, a pastor in Tyler and a former member of the City Council. “My generation has had their opportunity to decide what the cause is going to look like.”

Historians tabulating the lynchings and other murders of black Texans in the 20th century estimate many of them happened in East Texas. The first half of the last century was punctuated by riots. White people burned down sections of their towns where black people resided and owned businesses and murdered black people without consequence. The Klan and other white supremacist groups have kept strong roots in this part of the state since the Civil War, organizing events in East Texas as recently as a couple of years ago. According to the Southern Poverty Law Center, at least two Klan-related groups were active in East Texas in 2019.

Those who know even a little of the region’s history and reputations have been shocked by the number and size of protests organized not just in a relative hub like Tyler but in the smaller towns throughout East Texas, each with its own history of injustice.

About 100 people showed up to protest in Jasper, which became synonymous with racial hate in 1998 when three white men tied James Byrd Jr., a black man, to the back of a pickup truck and violently dragged him to death. Two of the men have since been executed, and the third is serving a life sentence.

Jaylen Weatherred, who is black and a Lufkin native, was going to organize a protest there in early June before he saw someone had beat him to the punch. He was surprised to see that most protesters appeared to be white, not black, and the group was small, unlike the protest he had driven to in Houston a couple of days before. “In Lufkin, people were a little scared to speak loudly, to chant loudly,” he said. “We have to start somewhere.” 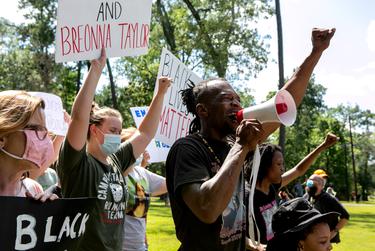 Brother Emmanuel Thomas leads a chant during a rally for George Floyd. Organizers of the demonstration in Vidor, historically known as a "sundown town," said they wanted to change the reputation and move on from the past. Pu Ying Huang for Texas Tribune

When flyers circulated earlier this month advertising a Black Lives Matter rally in Vidor, a majority-white city near the Louisiana border that used to disallow blacks after dark, many thought it was a joke or a trap. But organizers Maddy Malone, who is white, and Yalakesen Baaheth, who is black, said they wanted the “peace march” to show that Vidor has changed and is home to people of color as well as white people who are against racism.

Baaheth, who is 25, used to live in Beaumont, about 20 minutes away from Vidor. When her parents drove her to sleepovers at friends’ homes in Vidor, they made sure not to stop anywhere else on the way.

She hadn’t organized before and is hoping more people will start talking about racism in the aftermath of the march. “There’s much more that can be done with discussion than with angry actions,” she said.

Unlike in some of the smaller East Texas towns, Tyler activists have been consistently protesting since Floyd’s death, and they have no plans of stopping.

When Amori Mitchell and other activists announced that demonstrators would march from downtown to the southern, whiter part of Tyler in the days after Floyd’s death, they received threats from white supremacists. Mitchell, who is black, took that as a sign that not much had changed in racially segregated Tyler.

According to organizers and Tyler police, at least two men threateningly drove their car toward protesters and local media but did not injure anyone.

Shackelford and Mitchell were among the organizers who met with city leaders earlier this month to lay out their agenda for how to turn the demonstrations into action. “That meant a lot to us to have them come out and say they’re still pushing the issue,” Mitchell said.

Mitchell, who is 31, wonders whether her young nieces and nephews will have a different experience than she did growing up in Tyler. They’re confused about why their older family members caution them against wearing hoodies outside, not yet aware of the potentially deadly ramifications of racism.

And Mitchell thinks about her mother, Wilma Daniel, who attended segregated schools in a nearby town until fifth grade and lived in Texas when black people were forced to use different bathrooms and water fountains than white people. Daniel has been watching hundreds of people of all races show up to regular protests in Tyler this month and praying it means something will really change this time.

“It’s enough of the same thing over and over. How many different times and ways do I have to see someone die for it to be enough?” she said. “We have to stay tired of being treated differently because of who we are, but we can’t get tired of using our voices to make a change for the better.” 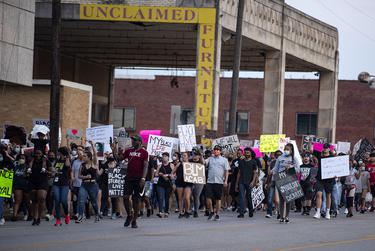 Demonstrators march in Tyler to protest the death of George Floyd. Sarah A. Miller/Tyler Morning Telegraph