All Harris County parks to close for Easter weekend

RAYMONDVILLE — A lot of Democrats running for the Texas Legislature this cycle are hoping that the opportunity to influence the next redistricting process helps propel them to office. One Democrat, meanwhile, is hoping it keeps him there.

As state Sen. Eddie Lucio Jr. of Brownsville looks to hold off two primary challengers, he is strongly emphasizing his experience and seniority, which includes nearly three decades in the upper chamber, making him the third most senior member in the 31-person body. He sits on the Senate Select Committee on Redistricting, and with three rounds of political boundary-drawing under his belt, he is arguing now is not the time for the Rio Grande Valley to gamble on a fresh face.

"This is no time for freshmen," Lucio said in an interview outside a campaign event here earlier this month, echoing comments he made last month to the McAllen Chamber of Commerce. "I didn't mean that in a negative way. I meant it in a very constructive way because ... I remember my freshman year — and nothing wrong with that, you know, time would give you the experience that you need, but right now it's important that we continue, have a little continuity on what we've had."

Yet Lucio's tenure — along with his experience siding with Republicans on some controversial topics — is fueling arguably unprecedented primary opposition from Brownsville attorney Sara Stapleton Barrera and Ruben Cortez, a member of the State Board of Education from Brownsville. Together they represent "probably the biggest challenge [Lucio]'s had in a long, long time," Brownsville historian Tony Knopp said.

The looming redistricting process is factoring prominently into state House races as Democrats work to flip that chamber and earn a bigger say in redrawing the maps that will shape elections for a decade. Lucio's emphasis on seeing that process through is part of a four-point reelection pitch centered on experience, seniority, "track record" and his relationships on both sides of the aisle.

But Stapleton Barrera and Cortez argue Lucio sides too often with Republicans, failing to represent his solidly blue district, especially since Lt. Gov. Dan Patrick, a conservative firebrand, became the Senate's presiding officer. And when it comes to redistricting, Cortez questions whether Lucio can be trusted to stick with Democrats throughout the process given his party-bucking ways and closeness to Patrick.

"That's not even a question we should have on our minds," Cortez said, "but we do."

Lucio has taken the opposition seriously, dramatically out-raising and outspending his competition since last summer. Still, he said he is not sure he could win outright on March 3, raising the possibility of a runoff that could draw in the party's most engaged voters.

Multiple attempts to interview Stapleton Barrera for this story were unsuccessful.

In interviews, Cortez was most vocal about Lucio joining Republicans in 2015 to lower the threshold required to bring legislation to the floor, paving the way for Patrick to advance a slew of red-meat legislation. But more broadly, Lucio has long split with his party on some key issues, including abortion, school choice and the Patrick-championed "bathroom bill" in 2017 that would have restricted transgender Texans’ access to certain public facilities. 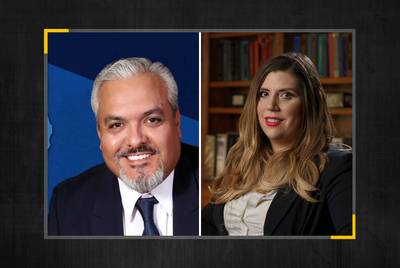 While Lucio disputes that his vote for the bathroom bill was anti-LGBT — it "wasn’t in any way to belittle anyone," he said — he otherwise is not exactly running away from some of the things that have drawn heat from fellow Democrats. As for being too tight with Patrick, Lucio said the relationship is necessary to be productive in a Republican-dominated chamber — "and I like to start at the top, because if he doesn't recognize me with my bill, then it's useless." On abortion, Lucio, a devout Catholic, acknowledged the practice is the law of the land but said, "There's a greater law in my book, and ... my faith is a part of my decision-making, and I can't get away from that.

"When it comes to using tax dollars for abortion, let’s say, I can’t support that," Lucio said in an interview. "I just can’t because not only I don’t believe in it, but the people I represent don’t believe in it. And I think it’ll be seen in this election because that’s what I’ve been hearing as I campaign."

Lucio's critics counter that South Texas Democrats are not as socially conservative as the conventional wisdom holds. The American Civil Liberties Union of Texas commissioned a poll in early January that found 68% of Democratic primary voters in the district who attend church at least once a week "believe lawmakers should not make abortion more difficult to access in Texas," according to an executive summary. The group did not respond to a request for the full survey.

Cortez suggested Lucio is hiding behind his faith on social issues. Discussing Lucio's record on LGBTQ rights, Cortez said he likewise considers himself religious, "but I also understand God's doors are open to everyone."

Cortez and his supporters are also eager to draw an education-related contrast with Lucio, who was the only Democrat in 2017 to vote for a Patrick-backed plan to provide scholarships funded by state business tax credits to help some low-income parents send their children to private schools. Lucio, vice chairman of the Senate Education Committee, has even earned an unusual reelection endorsement from the conservative political network created by the Koch brothers for his "leadership on educational freedom."

At a recent forum, Lucio said he has "made it no secret ... that I support the idea of parental choice," but he seemed to try to distinguish the concept of vouchers from the tax-credit scholarships that he backed, saying he does not "support programs like vouchers that are simply a redirection of state money directly to a private school." Cortez, who has led the State Board of Education in passing two anti-voucher resolutions, does not buy the purported distinction. At the same forum, he said he opposes "vouchers in every form, whether it's tax-credit scholarships — I stand against it."

That opposition earned Cortez endorsements from a host of state and local education groups, plus Progress Texas, while Stapleton Barrera has the backing of Annie's List, the statewide organization that works to elect Democratic women who support abortion rights.

"We think either of them moving in to a potential runoff is a great situation for our supporters to be in and for Planned Parenthood patients," she said.

Asked what sets him apart from Stapleton Barrera, Cortez pointed to his experience on the State Board of Education, particularly working across the aisle, saying voters know he would "be ready to fight on day one" in the Senate. At a January forum, Stapleton Barrera left little question about what she sees as her advantages, touting the perspective she would bring to the male-dominated Rio Grande Valley delegation, as well as her background outside elected office.

"We don't need a career politician," Stapleton Barrera said. "We've had that for the past 28 years, and how much good has that done us?"

Stapleton Barrera has been getting outside help from a political action committee that is airing TV ads saying she "stands with President Obama and 82% of Americans in support of term limits," which Lucio opposes, saying voters should determine how long politicians stay in office based on their performance.

The incumbent, for his part, is running TV spots in which he highlights his support for expanding Medicaid while not shying away from his long time in office.

"Working to provide a better quality of life has been my heartfelt commitment since I took office in 1987," said Lucio, who was first elected to the state House that year.

To at least some of Lucio's supporters, his stature and ability to get things done for the district supersede his occasional breaks from party orthodoxy on hot-button issues. That was the sentiment as two officials from Kenedy County — the third least populous county in the state — waited to hear from Lucio at his meet-and-greet here.

"We're both Democrats," said the county tax assessor-collector, Sandra Garcia Burns, standing alongside county Commissioner Cindy Gonzales. "We can't get anything done unless we work across party lines, otherwise we're gonna be at a stalemate, we're not gonna have anything done for our county, for our people, if we don't."

As for Lucio's posture on some social issues, Garcia Burns said, "He's a very religious and faithful man, and he sticks true to his convictions and his beliefs, and me personally, I agree with him sticking to what he believes."

The room was filled with reminders of Lucio's deep roots in the region. Standing near him as he spoke was Edward Gonzales, a Lucio staffer and Raymondville city commissioner whom Lucio said he first met when Gonzales was 19 years old and working for his campaign in Willacy County.

Before the luncheon, Lucio was at the Iwo Jima Monument in Harlingen to accept a reelection endorsement from the Combined Law Enforcement Associations of Texas. Carlos Zamorano, president of the Brownsville Police Officers Association, said the group has endorsed Lucio "for my entire career," and it was "something that we don't need to give a second thought to." As for Lucio's primary challengers, Zamorano said he has heard "a little bit" about them.

"They're good people and there's no denying that, and I'm not quite sure how close of a primary this might be, but I know that Sen. Lucio has a wonderful reputation," Zamorano said, "and to beat him, it's gonna take one quality individual and a lot of support."

Disclosure: Annie’s List, Planned Parenthood and Progress Texas have been financial supporters of The Texas Tribune, a nonprofit, nonpartisan news organization that is funded in part by donations from members, foundations and corporate sponsors. Financial supporters play no role in the Tribune's journalism. Find a complete list of them here.