Father of 4 dead after crashing into an 18-wheeler in NE Houston, family says

HOUSTON – A series of fatal accidents on a 12.5-mile stretch of the Grand Parkway has no readily identifiable common link, but merits continued investigation, according to the Fort Bend County Toll Road Authority.

“We acknowledge there are a lot of accidents on the road. We're looking into it, we've looked into it, and we've had our engineers look at it,” Mike Stone, the chief operating officer of the Fort Bend County Toll Road Authority, said.

Accident records show nine fatal wrecks in the last 14 months on the stretch of the Grand Parkway between Highway 59 and the Westpark Tollway, known as the lower part of "Segment D."

This section of the Grand Parkway opened as a tollway in April 2014.

“I think they opened it as a tollway with a 65-mph speed zone prematurely,” said James Barthelme, with ATA Associates Accident Reconstruction Services.

Barthelme agreed to look at the accidents happening in the area. 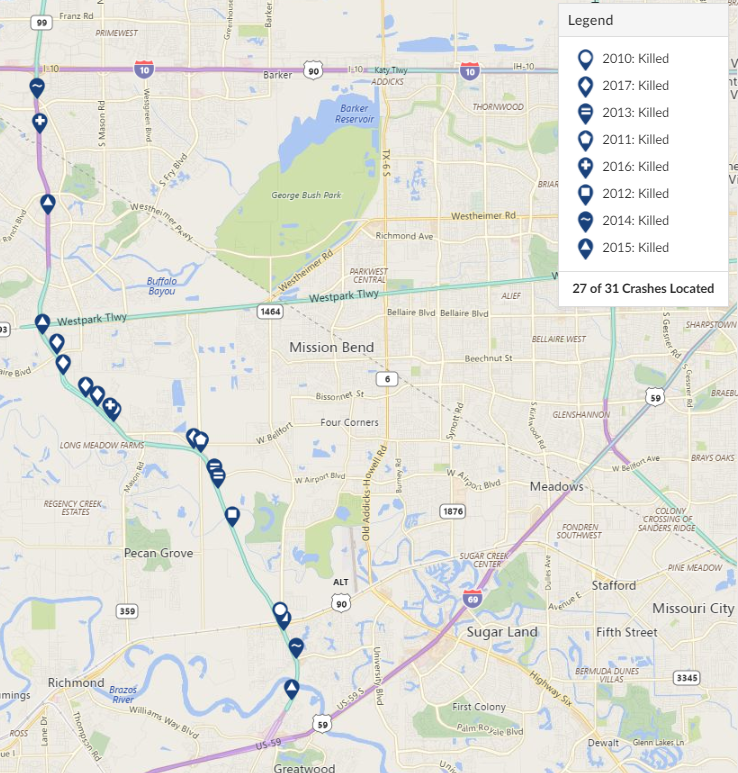 Excessive speed and/or alcohol play a role in at least 50 percent of the fatal wrecks, but other fatal accidents on the same stretch are less easily explained.

Barthelme said he believes a contributing factor to the number of wrecks is that this section of highway was not originally designed to accommodate a modern toll road. It is the oldest section of the Grand Parkway, part of the original State Highway 99. It has been retrofitted and partially modernized to generate revenue to finish it.

The Grand Parkway along the 12.5-mile stretch is a mix of concrete, asphalt, long straightaways and tight curves. Traffic is constantly entering and exiting to avoid tolls. Some of the road is separated by barriers while some is not. There are wide medians in some areas and no median in other spots.

In fact, some sections of the Grand Parkway south of the Westpark Tollway are feeder roads, being used as main lanes, as is the case south of Bellaire.

Stone said he wants to figure out why there are so many accidents, and in lieu of a common link, he will ask law enforcement agencies to more closely monitor the stretch.

That could mean more traffic tickets for commuters, but Stone said he believes it could result in fewer accidents and a safer highway.

Here's a look at the deaths by year on the Grand Parkway: