(TEXAS TRIBUNE) – This coverage is made possible through Votebeat, a nonpartisan reporting project covering local election integrity and voting access. The article is available for reprint under the terms of Votebeat’s republishing policy.

Clear skies across Texas ushered voters to the polls for a historic Election Day on Tuesday, even as a political storm hovers at the close of an anxious, divisive presidential election unlike any other.

Masked up against a pandemic and determined to be a part of the record-breaking turnout in Texas and across the nation, they lined up before dawn at schools and shopping malls and gigantic brand-new voting centers.

“My big takeaway from this morning is that the sun is shining in Texas and people are voting,” said Mimi Marziani, president of the Texas Civil Rights Project, after citing high turnout numbers in big counties like Harris and Fort Bend. “At this point in the day the big story is celebrating the fact that Texas has squarely moved from being a state where so many folks were sitting on the sideline to being a voting state.”

As the national conversation around potential Election Day problems and unrest continued to grow in the days leading up to Tuesday, the push for early voting as a failsafe against problems drove record-breaking numbers to the polls before the day even began.

But although some 57.3% of registered Texas voters have already cast their in-person and absentee ballots with an extra week added during early voting, many still waited until Tuesday to take part in what many voters called the most important election of their lifetimes.

“In my family, everybody has different opinions, and I really wanted to read more about [the issues],” said Lizbeth Lopez, 38, a home health agency owner voting Tuesday in El Paso. “I did change my mind, so it was good that I wanted to make sure that I finished my research.”

Harris County has already hit an all-time record high with 1.55 million total votes so far including 123,000 votes cast as of 2:20 p.m. Tuesday, according to the Harris County Clerk’s office. Total raw number turnout increases are in part a result of the addition of more Texans overall — 1.8 million more people have registered to vote in this state since the 2016 election.

In El Paso County, about 19,000 people cast ballots on midday Tuesday as of the middle of the day— bringing the running total to 241,149 including early votes and absentee ballots so far. That’s even as as the county experiences a COVID-19 surge with 18,210 new cases in the last two weeks,

El Paso voter Joshua Laymon was quarantined for the last part of October and missed early voting, so he showed up Tuesday for his last chance to vote. Laymon, 27, said he felt like voting posed little risk “as long as everyone is taking precautions and you take care of yours.”

“I really needed to get it done,” he said.

In North Texas, Tarrant County saw more than 63,000 people vote on Election Day as of 2:20 pm, according to its live voter turnout tracker.

When early votes are included, total numbers already surpassed the 682,740 voters who cast a ballot in Tarrant County in 2016.

Early Tuesday afternoon, Fort Bend County Judge KP George tweeted that Fort Bend was the first reported county in the state to surpass 70% total voter turnout. However, most of that is a result of record early voting. Fort Bend elections manager John Oldham said Election Day voting was lower than usual. As of 1 p.m. around 15,000 people had voted there for the day.

That doesn’t put the county on track with the total turnout Elections Administrator Jacque Callanen was looking for, she told reporters Tuesday morning, but Bexar County has already surpassed total voter turnout for 2016 with four hours left before polls close.

In Hays County, John Gamez, mass communications junior at Texas State University, wanted to be part of the Election Day action so he voted on campus Tuesday instead of voting early.

It took him under an hour, he said, and though he was worried about catching the virus, he saw people being cautious — wearing masks and socially distancing inside.

“I just kept to myself,” Gamez said. “I was trying to keep myself safe, and I think that’s like the most important thing I could’ve done for anyone.”

But the day has not been without hiccups.

Although most polling places opened on time at 7 a.m. Tuesday morning, the Texas Civil Rights Project said it had received reports of at least a dozen locations across Texas that were still closed by 8 a.m.

“There have been a couple of bumps, of course,” Marziani said. 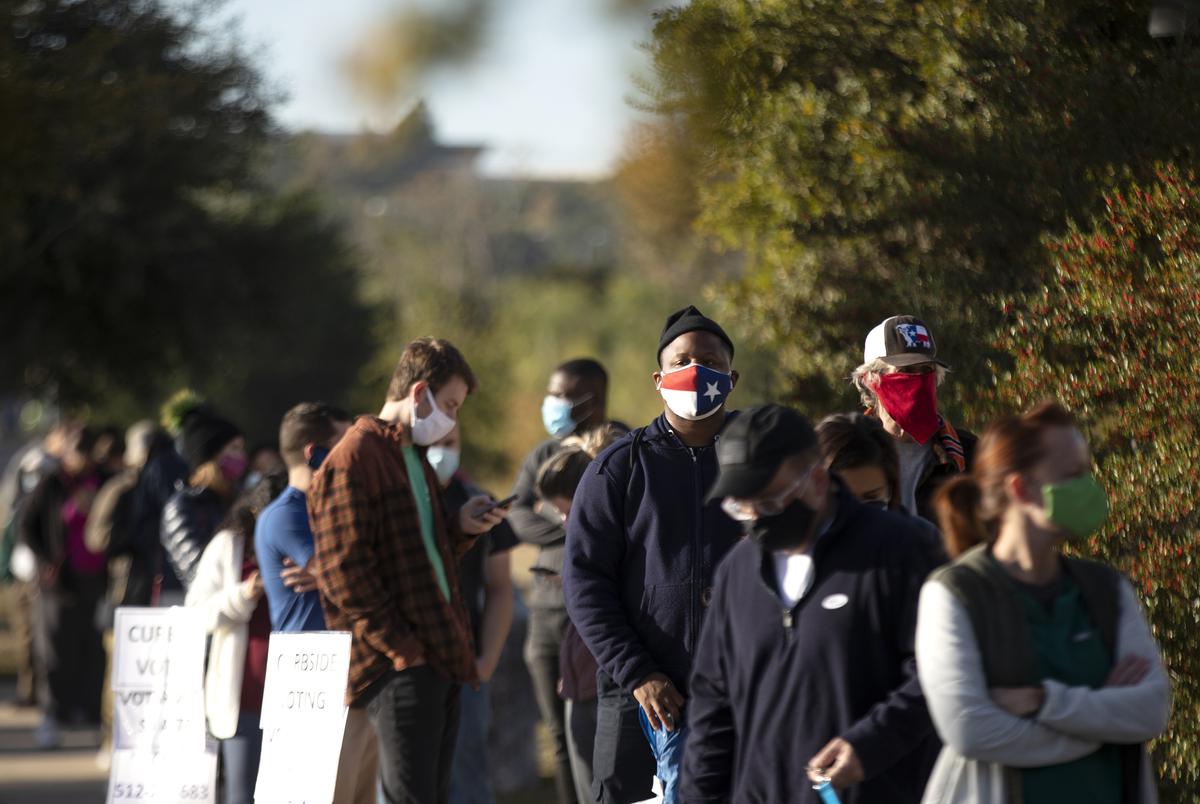 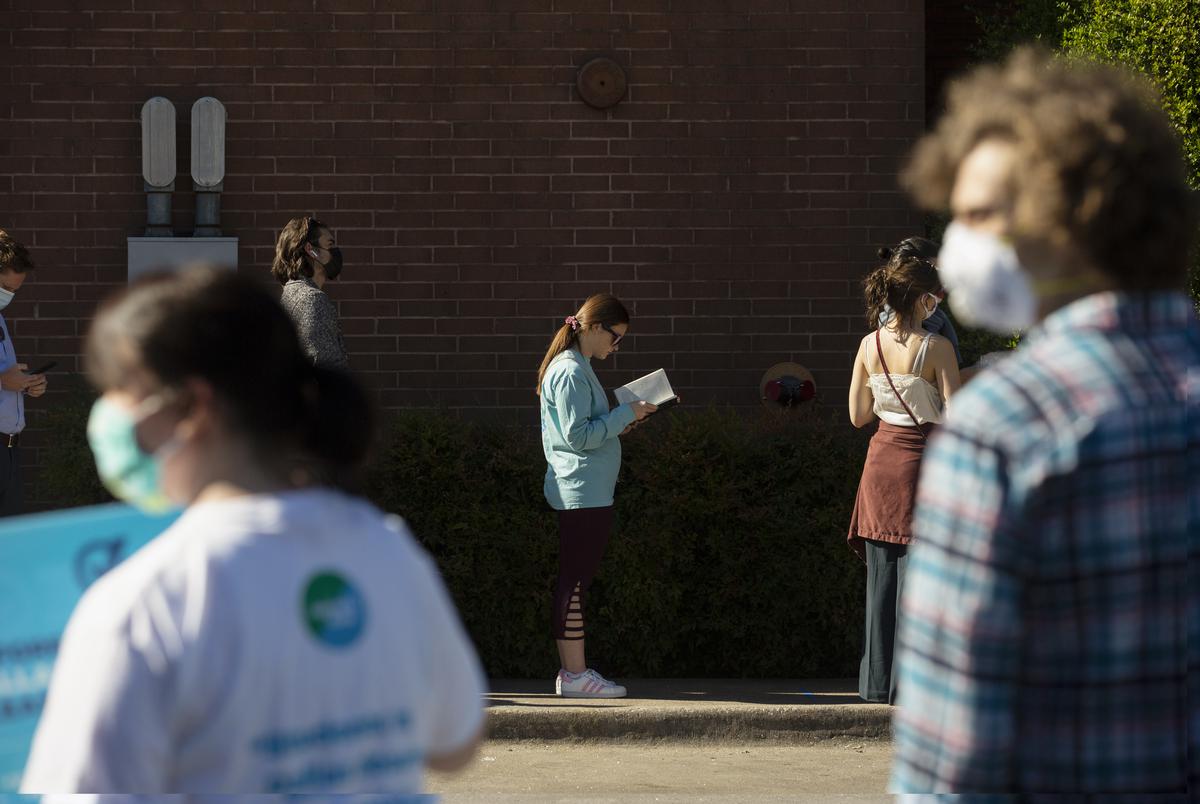 Voters stand in line at the Oak Lawn Branch Library to cast their ballots on Election Day in Dallas. Nov. 3, 2020. (Credit: Shelby Tauber for The Texas Tribune)