How Houston stacks up against other Top 10 cities in America

HOUSTON – Houston is currently the fourth largest city in the United States, but how does the Bayou City compare with the rest of the top ten cities in America?

A report by the city of Houston's planning and development office attempts to answer that question.

Here is how Houston compares with the rest of the 10 largest cities in the U.S. in terms of demographics, social, economic and housing characteristics.

Of the 10 most populous cities in the U.S., Houston ranks fourth, with 2,240,582 people, after New York, Los Angeles and Chicago. Houston experienced a 10 percent increase in population between 2010 and 2016. Houston’s population has increased 13 percent from the start of the millennium to 2016, while San Antonio leads with the most population change at 20 percent.

Houston is tied in second place with San Antonio at 18 percent for the “going to school” age population (5 to 17 years old).

Sitting at 75 percent, Houston is one of the lower-ranked voting age cities. Houston is tied for second with Dallas for having the most millennials in its population (18 to 34 years old), while Chicago and Philadelphia are tied for first. In the middle-age population (35 to 64 years old), Houston has a 36 percent rate in its population, tied with Philadelphia and San Antonio. Overall, Houston’s median age is 33, making it one of the most youthful cities in the U.S. 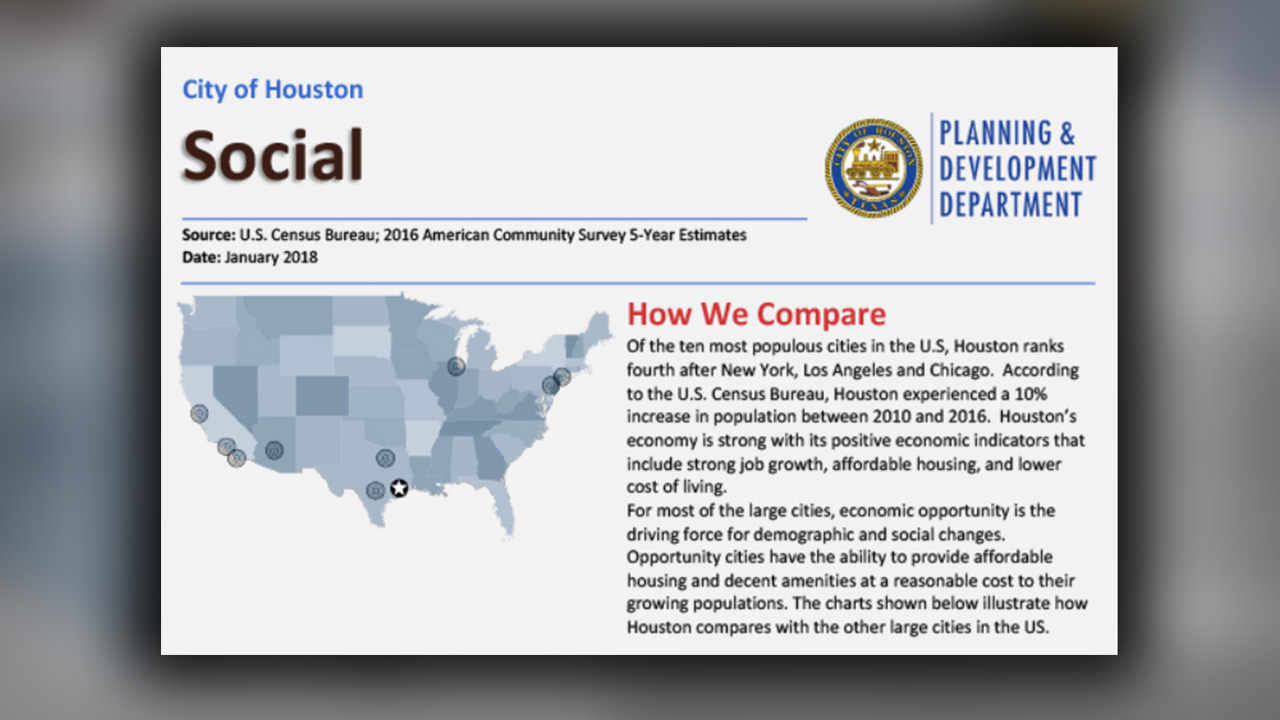 Houston’s economy is strong. Its positive economic indicators include strong job growth, affordable housing and low cost of living. For most of the large cities, economy opportunity is the driving force for demographic and social changes. Opportunity cities have the ability to provide affordable housing and decent amenities at a reasonable cost to their growing populations.

Houston’s educational attainment of persons with less than a high school diploma sits at 23 percent as well as those with a high school diploma. College graduates and those with professional degrees, including a master’s degree, medical degree, doctoral degree and other advanced professional degrees. Houston is tied with Dallas at 12 percent, and San Antonio has fallen to 8 percent.

Ranked fourth on the list, Houston has a total of 831,166 households in the city, coming in behind Chicago, Los Angeles and New York City, which has the most households at 3,128,246.

Married couple families come in at 38 percent, which is the median number among the other cities. San Jose is the city with the most married couples, at 56 percent.

Tied for second with San Antonio, Houston has a 30 percent rate for households with children under 18 years old.

The average household size for the United States is 2.65 and Houston comes in right ahead of the average with 2.66.

Houston rivals itself in martial status numbers to people who have never been married before with a 42 percent to 40 percent rate. 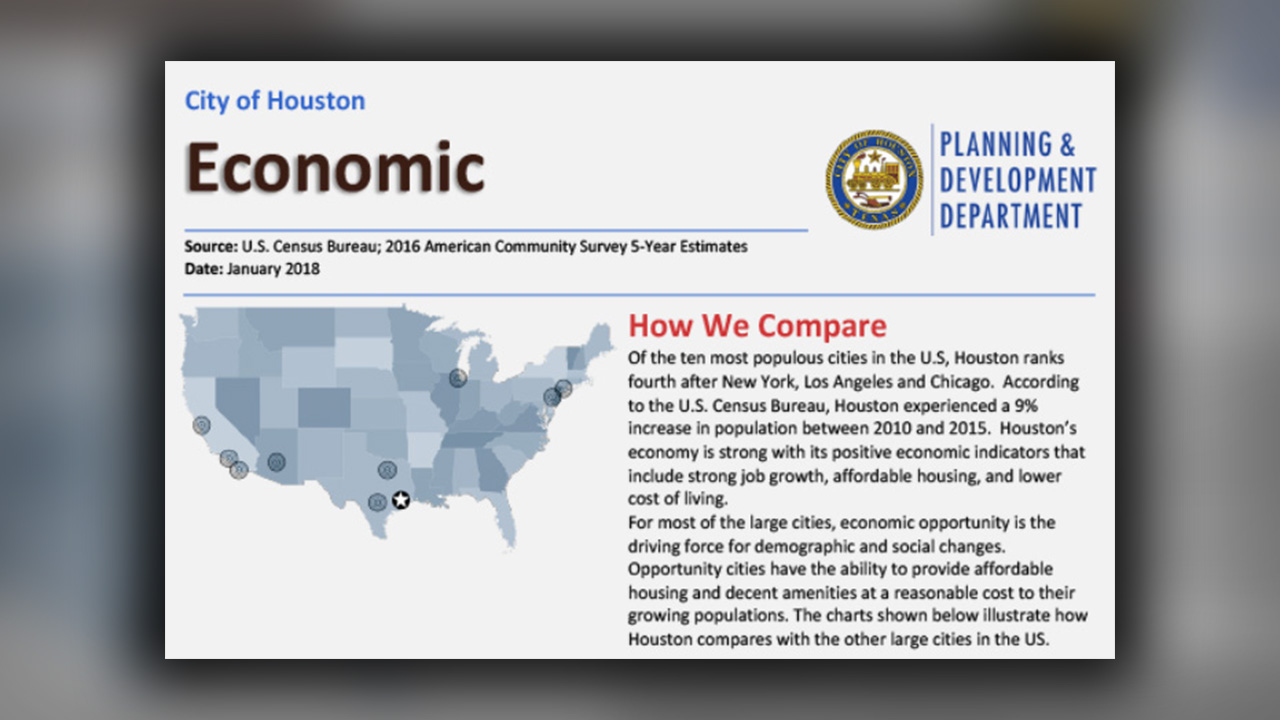 Houston’s median household income is $48,064, ranked seventh of the 10 cities.

Houston has the lowest percentage of individuals not in the labor force, at 31.9 percent, meaning just under 70 percent of the city is employed.

Houston falls below the median level for employment in educational, health and service fields, at 18 percent.

Houston’s classes of workers are as follows:

Houston ranks fairly close to Dallas in having no health insurance coverage, with Houston ranking at 25 percent and Dallas at 26 percent. 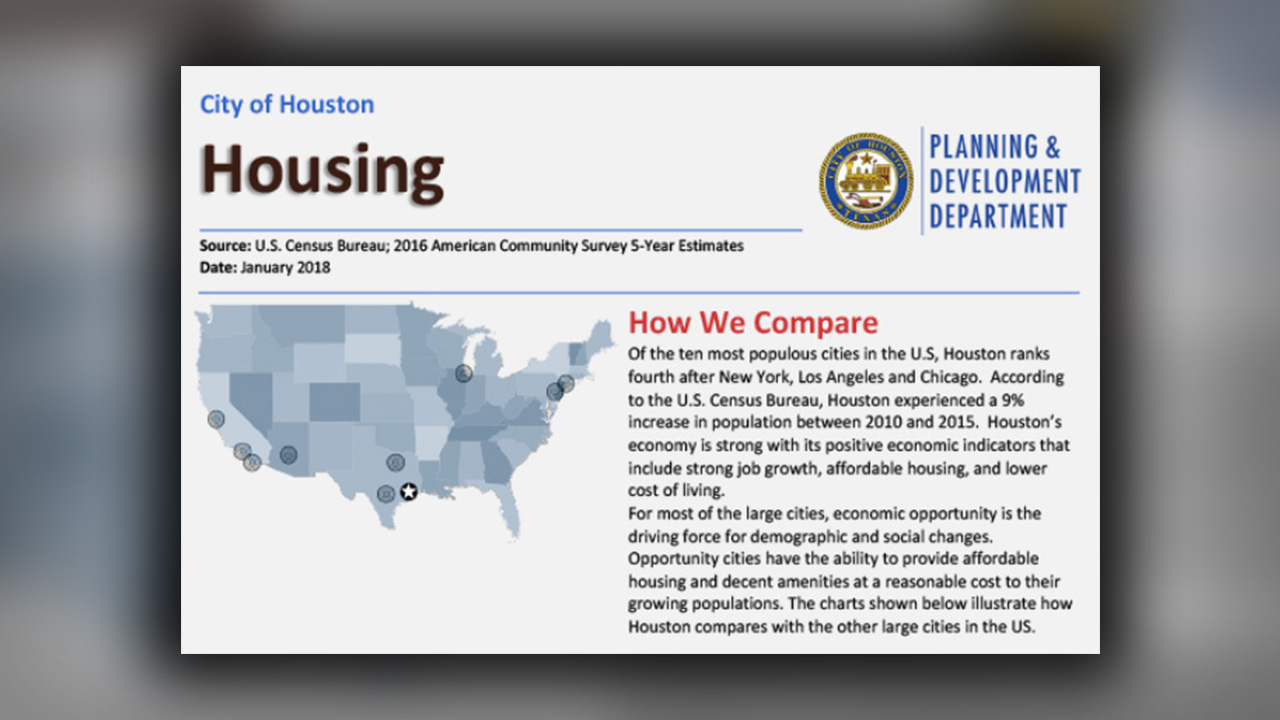 Median rent for the city of Houston is $923, making it the city with the third-most affordable rent price in Texas, compared to Dallas at $903 and San Antonio at $901. Overall, the U.S. median rent price is $959, which is $36 higher than Houston.