The books Texas is targeting — mainly novels that focus on discussions of race, sexual orientation and gender identity — tell the tale of Izu’s past and future. The 17-year-old high school student is Asian American, Black and Hispanic and bisexual, and she hates to see her identities or her peers’ censored.

“I ignored [my sexuality] for a really long time. And I think that as a young girl, if a book showed me that this is a life that could be lived, I could have had a lot more peace and coming to terms with bisexuality,” said Izu, who attends James E. Taylor High School in the Katy Independent School District near Houston.

Here and there, Texas students are forming their own book clubs to read what adults want banned. Books like Margaret Atwood’s “The Handmaid’s Tale,” Ashley Hope Perez’s “Out of Darkness” and Carmen Maria Machado’s “In the Dream House.” Books that, until last fall, were easy to find and access.

In Katy ISD, students have distributed hundreds of novels challenged by adults in Texas. They’re getting the books free of charge from a political advocacy organization and publishers. And in Leander ISD near Austin, students are coming together in a banned-book club to discuss those books. Some students are starting to attend school board meetings to fight for the freedom to choose what to read.

More than a hundred Katy ISD students of a variety of ages, races and gender identities met after school to discuss the bans and pick up contested novels. Among the books they’re reading is Kalynn Bayron’s “Cinderella is Dead,” a novel that follows a queer, Black teenager’s coming-of-age story. Izu, who saw herself reflected in the book, said her heart broke when Texas schools targeted it for a ban.

“It felt like my identity was seen as dangerous because of the banning of a story like that. What about my story? Am I seen as a bad influence?” Izu said. “Am I seen as something that should be shamed?”

Texas parents and politicians say they are protecting students with book bans. Many students, including Cameron Samuels, a senior at Seven Lakes High School in Katy ISD, aren’t buying it. 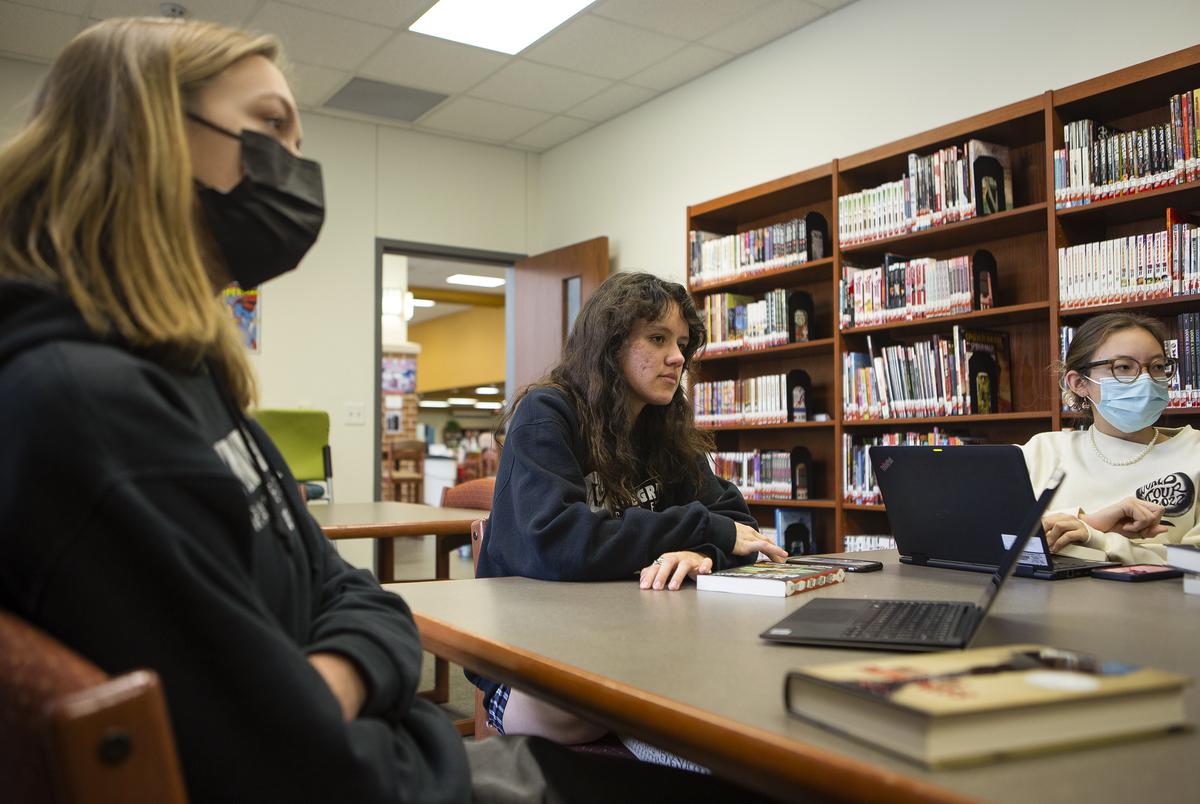 Students in the banned-book club often discuss how each book introduces to them new perspectives or historical events. Credit: Lauren Witte/The Texas Tribune 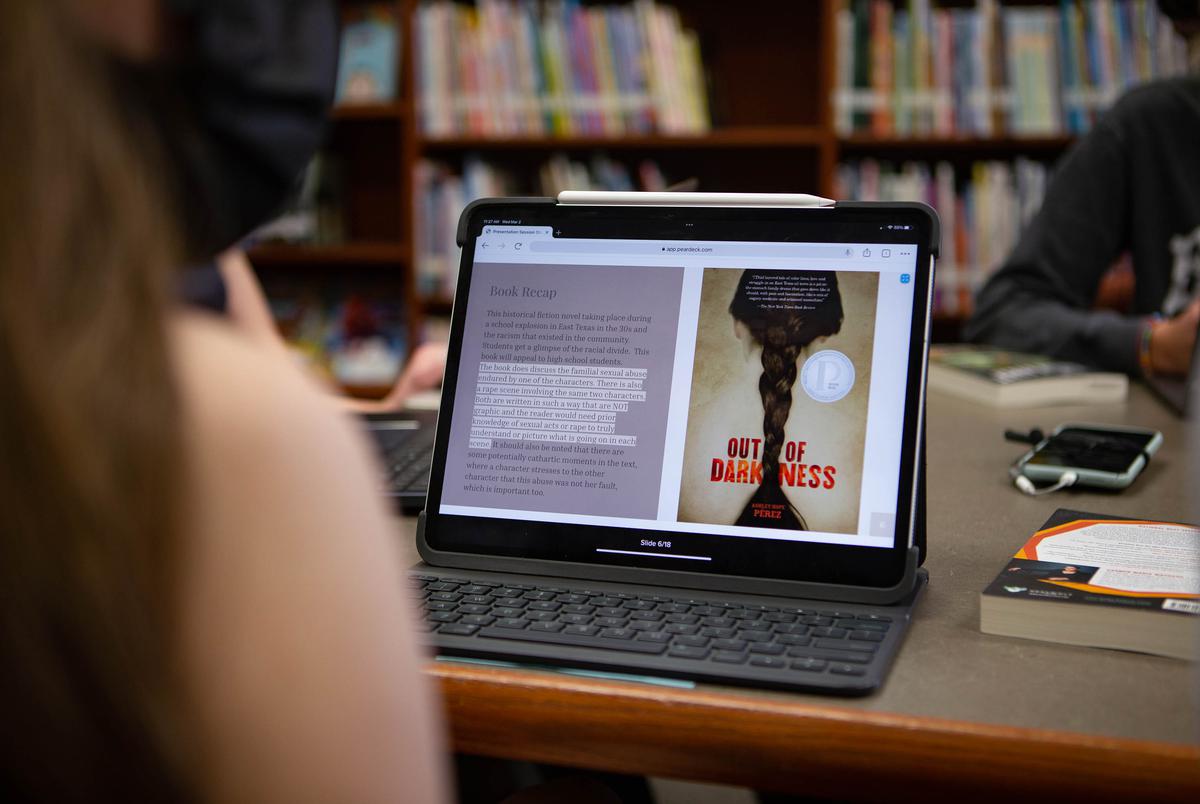 A slide showing a recap of the banned book the club just finished, Out of Darkness by Ashley Hope Pérez, during the club's meeting in Vandegrift High School's library on Wednesday, Mar. 2, 2022. Credit: Lauren Witte/The Texas Tribune

Students in the banned-book club often discuss how each book introduces them to new perspectives or historical events. Credit: Lauren Witte/The Texas Tribune

“It’s clear that these books address issues of race and LGBTQ identities, and that is the exact reason that certain people are seeking to remove these books from libraries and prohibit students from accessing them,” said Samuels, who helped with distribution efforts. “And these policies have dire consequences for us because they keep us struggling with our queer identities.”

Katy ISD students showed strong support at the events, Samuels said. But not all parents are happy, and some have even tried to enter the school to disturb student discussions on Texas’ book bans, they said.

“As far as I have seen, parents have been the center focus of the movement to ban books and remove them from libraries, where students have been at the forefront of advocating for having access to these books,” Samuels said.

Books on race are also targeted, especially after Texas lawmakers passed a social studies law to target what they referred to as critical race theory, though the law does not specifically mention it. Critical race theory is a university-level discipline that considers how racism is embedded in policies and systems. The new law states that a teacher “may not be compelled to discuss a widely debated and currently controversial issue of public policy or social affairs” in public schools. While this law primarily applies to social studies curriculum, some are also trying to apply it to any book found in a school library.

The district returned “New Kid” to shelves last semester, but Samuels said only students in fifth grade and up are permitted to check it out.

Samuels, who is nonbinary, said the novel comforted them, as they have often felt isolated as one of the few students at their school who use they/them pronouns.

“I have often felt alone and have experienced microaggressions,” Samuels said. “There’s no reason that addressing these issues should be something that students are prevented from doing or prohibited from learning about.”

Katy ISD does not allow students to distribute books the district banned. Samuels said it feels condescending that those in power decide what students can and cannot read.

“As students, we must take ownership of our education and not let others decide for us which resources we can access and which topics we can learn about,” they said.

At a recent Katy ISD school board meeting, students packed the room to call for the district to return books to libraries. Samuels and other students plan to continue to protest book bans at a Capitol rally on March 12.

“This is censorship. This is bad,” Izu said. “This is condemning things that shouldn’t be condemned.”

Book bans exploded across the state and country during this school year. In October, state Rep. Matt Krause, R-Fort Worth, called on schools to disclose whether any of about 850 book titles were in their libraries. He said books “that might make students feel discomfort” should also be identified.

Maghan Sadeghi, a James E. Taylor High School senior who is working with book distribution efforts, said Abbott’s statement sounds “like a bunch of ignorance.” She notes that her AP literature class requires many readings that reference sex. In “One Flew over the Cuckoo’s Nest,” it is suggested on several occasions that staff rape patients. In “Hamlet,” sex before marriage is compared to a worm invading a flower before it blooms.

“They’re OK with heterosexual scenes, heterosexual ideas. But the second something turns slightly, slightly queer, slightly homosexual, it discomforts them. It’s the same thing with [people of color] viewpoints,” Sadeghi said. “​​Why do we have to remove books about Black people and Asian Americans simply for the sake of white people’s comfort?”

In Leander ISD, students gather together every two weeks to answer a similar question: Should this book be banned?

Vandegrift High School sophomores Ella Scott and Alyssa Hoy created the school’s banned-book club after looking at the list of books their district aimed to ban last year. The district would remove some of their favorite books from classroom libraries, and as a result, the students began having discussions about decisions they felt the district made without them.

“I loved ‘The Handmaid’s Tale,’” Scott said, referring to Atwood’s novel about a totalitarian society that forces fertile women to be raped so they can carry to term the offspring of elite couples. It’s now one of the restricted books in her school. “I love that book. Forever. It’s one of my favorites. Seeing it on the list was definitely disorienting.”

Leander ISD has so far removed the physical copies of 11 book titles from classroom libraries, but nine of those still reside in the school’s main and digital libraries, according to Matt Mitchell, Leander ISD’s communications coordinator.

During study hall, dozens of students from all grades meet to discuss one of the banned books’ plot and purpose, as well as who should have access to its storylines. So far, they generally agree the banned books furthered their education and should be freely accessible in the classroom.

Often, the students discuss how each book introduces to them new perspectives or even historical events. 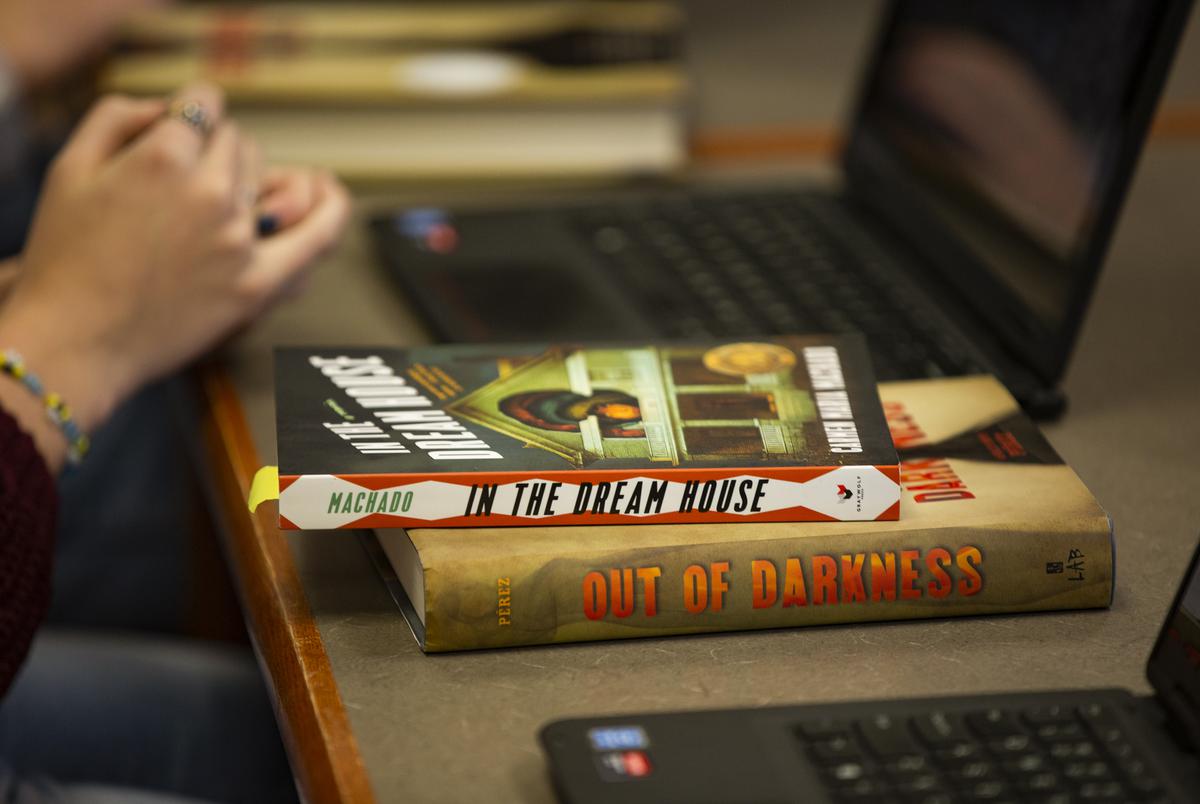 Vandegrift’s banned-book club recently set up an Amazon wish list to fund book purchases, and one of its founders said the community has supported the students. Credit: Lauren Witte/The Texas Tribune

Pérez’s now-banned novel “Out of Darkness” follows a love affair between Naomi, a Mexican American high school senior, and Wash, a Black teenager, in the days before the 1937 gas explosion at the New London school, still one of the worst national disasters in history. Many book club students were unaware of this tragic event in the East Texas town of New London.

“These are very powerful stories,” Hoy said. “Most of the time, those tough decisions and tough scenes are reasons why they are so powerful and so meaningful to so many people.”

Last semester, the club had members purchase their books. Recently, the club set up an Amazon wish list to fund book purchases. In 24 hours, donated funds paid for the group’s books. Hoy said the community has supported the club through the semester.

“Eventually, we hope our club won’t be necessary,” Scott said. “We just hope that our voices and our opinions will be considered.”

Disclosure: Amazon Web Services (AWS) has been a financial supporter of The Texas Tribune, a nonprofit, nonpartisan news organization that is funded in part by donations from members, foundations and corporate sponsors. Financial supporters play no role in the Tribune's journalism. Find a complete list of them here.