At Texas church where the pastor has coronavirus, “thanks be to God” for Facebook Live

The pastor could not be present for Sunday morning services, and yet there he was — in spirit, of course, but also in the comments.

Churches across the state were shuttered Sunday, and worshippers forced to get creative, as the U.S. begins to grapple with a deadly new strain of coronavirus that has killed thousands worldwide and infected dozens in Texas.

But perhaps nowhere has that ingenuity been more necessary than at Trinity Episcopal Church in Fort Worth, whose pastor, Rev. Dr. Robert Pace, was the first case of COVID-19 in Tarrant County. He remains isolated, and 40-some parishioners who came into contact with him at a church event for Lent have been forced into self-quarantine as well. The church building was closed to the public. They refuse to let that keep them apart.

And so instead of in the gray stone building near Texas Christian University, they have gathered online, clustered in their beds and on their couches, around their desktop computers and over the phone. Sunday morning was service by livestream: watchable in pajamas, with dogs in laps and coffee mugs in hands.

From inside the church itself, with just a few parishioners as her audience, the Rev. Canon Janet Waggoner, filling in, reminded the community that “in times of chaos and times of calm, we are God’s church.”

“And thanks be to God that Facebook Live helps us come together in mind and spirit even when we must fast from gathering together in person,” she said.

Half an hour into the service, Pace chimed in to thank her. Likes immediately rebounded.

After a tumultuous 2019 — the church had to hire a new pastor and replace its entire air-conditioning system — 2020 was supposed to be quieter. But the stability promised with the new year and with Pace’s hire has faded these last few weeks, forcing the community to come together in new ways.

They had still been getting to know Pace, whom one parishioner described as “a big huggable bear,” when he fell ill earlier this year. For weeks before his COVID-19 test, he had been sick and absent from most services, hardly reachable. He managed to make it to the church for a Lenten supper of soup on Wednesday, March 4, but by the following Monday, he was in the emergency room. His wife texted Scott Millican, the church’s senior warden, to let him know: Pace had pneumonia.

The next day, they learned he also had COVID-19. In February, he had traveled to an Episcopal conference in Kentucky that seemed to leave at least two other pastors with the virus.

The news sent the community into a tailspin. About 40 parishioners, some of them elderly, had been with Pace on March 4 and were sent into self-quarantine. Among them was Deacon Tracie Middleton. So far, parishioners said, none appear to be showing symptoms.

Pace’s wife, known affectionately as Mother Amy, has tested negative. She and Pace have been communicating over text; now that he is no longer hospitalized, she leaves meals outside his door. Parishioners said Pace is feeling better every day.

In the absence of their routines, the church is building new traditions. On Sunday, that was the live streamed service — with a call-in option for those less adept at Facebook — with just a few parishioners present in person for the services’ calls and responses, their prayers echoing loud in the sanctuary with few bodies to cushion the ring.

On Friday, it was a video call on Zoom — a check-in and a chat, and then a religious service. As part of the evening service, called Compline, Middleton read Psalm 91. She’s read it countless times before, but on Friday the verses — “You shall not be afraid. … Of the plague that stalks in the darkness / nor of the sickness that lays waste at mid-day” — rung out differently.

“Even in this situation which is so unfamiliar and strange, when we put it back in the context of these prayers and these things that we have known, it gives some order to the experience,” Middleton said. “It’s one of the things liturgy does for people: It brings you together. Using the format and the structure and the repetition of things is what allows you to all be in it at the same time. Because you know what it is that you’re saying together.” 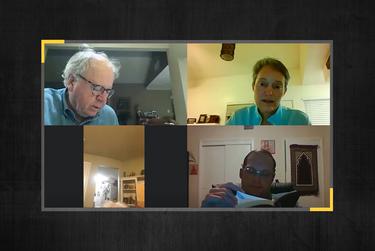 Middleton, who said she tested negative for the virus, is nonetheless fighting a cold, and told a fellow parishioner on the call she could use some more Kleenex. They soon arrived. On Sunday, her 44th birthday, she looked out her window to find cookies and a Starbucks drink.

The link for the video call is live around the clock, so parishioners can click into it anytime. Evening services are set to take place every night. A separate link may be set up for a separate group that convenes on Thursdays for 20 minutes of contemplative silence.

George Barlow, 74, a decades-long member of the church who has been coordinating an online class during Lent, said he is considering moving that group’s weekly Saturday meetings online, too. He has had no trouble with the Zoom platform. Nor is he struggling much with the quarantine: He had just received a delivery of fried catfish from a fellow parishioner, and he recommended the show Made in Heaven, a drama about rival wedding planners in Delhi.

Also, using FaceTime: “Before, that didn’t seem like such a big deal,” he said.

Victor Mashburn, 71, who is also among the quarantined group, said when the news emerged, parishioners were immediately concerned not just for their own health but for the wellbeing of the others who had been present with Pace that night.

“You hear the term ‘family’ thrown out a little loosely, I think. But I really do think that we have a genuine church family,” he said.

Mashburn said the online Lenten study, begun before the virus invaded their community, has been a comfort, as have the virtual gatherings.

“At least for myself and my wife, when we miss out on our Sunday morning services, it creates a real void in our lives,” Mashburn said.

In quarantine, he and his wife have repurposed the stockpile of steak and potatoes and the “curated case of Texas beer” they bought for a Lake Texoma trip with their son and his family. And the phone calls from other members of the parish, which they have been a part of for about 17 years, have been a great help, he said.

The forced embrace of technology may prove a silver lining to the whole ordeal, Millican said. Brie Reyes, 38, hasn’t been able to attend services in person for months as her son fought off ear infections and other illnesses; on Sunday morning, she watched services from bed with her husband and three-year-old.

“That may have been a little hidden gem out of all of this — we’ve figured out a way that we can still do some of these things when we’re not able to be there physically,” Millican said.

Though it was not without its perils: Reyes said her son, who is enamored with the color orange, more than once reached for the Facebook video’s reaction options, sending angry orange faces surging through the livestream.

But mostly it was pink hearts and blue thumbs-ups that floated up past the heads of the few parishioners present in the church Sunday, and faded around the Waggoner’s ears.

Sarah Martinez, communications director for the church, said it’s important for parishioners to have their faith community in a difficult time.

From the dais on Sunday, Waggoner urged comfort and community, even “in the midst of this upheaval.”

On the livestream, the camera man’s voice came across just slightly louder than the others’. “And also with you.”

Disclosure: Texas Christian University and Facebook have been financial supporters of The Texas Tribune, a nonprofit, nonpartisan news organization that is funded in part by donations from members, foundations and corporate sponsors. Financial supporters play no role in the Tribune’s journalism. Find a complete list of them here.