What is the new Law?

House Bill 1325 went into effect June 10, legalizing hemp with a THC concentration level of 0.3% or below. THC is the psychoactive compound that can produce a high in users. Texas passed the law after the federal government made the same move on a national level.

What is the problem?

Texas crime lab directors and district attorneys said the new law has created a problem when testing marijuana cases for prosecution. Hemp and marijuana come from the same cannabis plant family, but hemp has a much lower concentration of THC than marijuana. Before the new law, Texas law was clear in that no amount of THC was allowed. Therefore, crime labs only had to detect whether THC was present in a sample, not the concentration level. The new law means labs now need to test for THC levels before prosecutors can determine whether a sample is legal or illegal.

President and CEO of the Houston Forensic Science Center, Dr. Peter Stout, said most Texas labs are not equipped to test for concentration levels, only to answer “yes” or “no” as to whether THC is present in a sample.

“The testing is insufficient to distinguish between hemp and marijuana,” said Stout. "If I can't test for it and produce that result, then prosecutors are not going to be able to prosecute cases.”

A prosecutor with the Waller County District Attorney’s Office, Warren Diepraam, said the office is dismissing about 200 misdemeanor marijuana cases filed after the law took effect because the office can’t incur the cost of having all those samples retested at independent labs. Diepraam said tests can cost between $200 and $500 per sample. He said the DA’s Office will incur this expense for felony cases.

“We can't prosecute them because we can't say beyond a reasonable doubt whether the substance is illegal or legal,” said Diepraam. “Because of the cut-off levels the legislature made and the distinction between legal and illegal, it's a whole new ballgame.”

Here's a breakdown of statements from other area counties:

"House Bill 1325 was signed into law by the Governor last month and became immediately effective.

"The House Bill creates a State of Texas Hemp Production Plan, and now allows farmers to grow hemp as a crop.

"Marijuana means the plant Cannabis sativa L., whether growing or not, the seeds of the plant, and every compound, manufacture, salt, derivative, mixture, or preparation of that plant or its seeds.  The term does not include … hemp, as that term is defined by Section 121.001, Agricultural Code."

"Hemp is defined by Section 121.001, as “the plant Cannabis sativa L. and any part of that plant, including the seeds of the plant and all derivatives, extracts, cannabinoids, isomers, acids, salts, and salts of isomers, whether growing or not, with a delta-9 tetrahydrocannabinol concentration of not more than 0.3 percent on a dry weight basis.”

"This necessarily means that the THC content and quantification is now relevant to prosecuting all marijuana cases.

"Therefore, in order to follow the law as now enacted by the Texas Legislature and the Office of the Governor, the Harris County District Attorney’s Office will not accept criminal charges for Misdemeanor Possession of Marijuana (4 oz. and under) without a lab test result proving that the evidence seized has a THC concentration of over .3%.

"Felony Marijuana charges will be evaluated on a case by case basis by our Office. In the proper instances, such charges may be taken while lab test results are pending."

"The Montgomery County District Attorney’s Office will not be joining those Texas prosecutors who have prematurely announced limitations on the acceptance of new marihuana cases as the result of the passage of House Bill 1325.

"While that legislation will eventually permit state officials to issue licenses for hemp cultivation and the production of certain hemp products, it is important to note that those agencies must first promulgate rules and regulations to govern the licensing process and the regulation of the hemp industry.  At this point no licenses have been issued and no legal hemp is being grown in this State.

"It is also important to note that the legislation expressly prohibits the issuance of licenses for the production of hemp products intended for smoking or vaping.

"Even after licenses are issued, legal hemp growers and transporters will be required to maintain and produce appropriate paperwork authorizing their activities.  With appropriate training and experience, law enforcement officers should have no difficulty developing probable cause to believe that an individual possesses marihuana intended for smoking, rather than lawfully cultivated hemp.

"It is true that there will be, for some undetermined period of time, a shortage of laboratories capable of determining the THC concentration of hemp and marihuana, and distinguishing lawful hemp from unlawful marihuana containing a THC concentration of more than 0.3 percent.  But the anticipated delays in disposing of those few cases in which individuals persist in pleading not guilty do not justify prosecutors’ abdication of their responsibility to enforce the criminal laws of Texas.

"This office will not use the anticipated problems in implementing the new legislation as a pretext to achieve the policy goal of ending prosecution of marihuana cases, particularly after the recent failure of all legislative efforts to decriminalize or reduce the penalties for possession of marihuana." 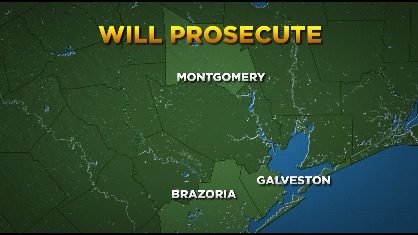 "The passage of HB 1325 by the Texas Legislature significantly impacts the enforcement and prosecution of the State’s existing criminal marijuana laws.  The problem isn’t with the law and the State’s desire to legalize agricultural hemp production.  The issue is that the law was enacted immediately and without any of the infrastructure in place to regulate the legal production of hemp, nor the ability of the State’s own scientific labs to distinguish between what’s legal and what’s not.

"Unfortunately, the unintended consequence of the law renders prosecution of marijuana offenses impossible until the infrastructure and scientific laboratories are capable of performing the analysis necessary to distinguish hemp from marijuana.

"We support local law enforcement and have reached out to our law enforcement partners with that message.  The legal standard to initiate a criminal investigation and make arrests has not changed; nevertheless, we will not be able to prosecute marijuana violations without a lab test quantifying the concentration of the once prohibited, and now regulated substance in hemp and marijuana – THC.

"Pending misdemeanor charges will be dismissed with the opportunity for our office to prosecute if, and when, an acceptable lab test becomes available.  We will continue to offer our marijuana diversion program which qualifies successful participants’ charges for expunction.

"Felony charges will be evaluated on a case-by-case basis and will be prioritized for testing and prosecution.

"Public safety is our top priority,” stated District Attorney Brian Middleton.  “We will not sit idly by while drugs infiltrate our schools.  And drug runners will not go free if they are moving loads of marijuana through our county.  It will just take extraordinary resources to prosecute those cases until the infrastructure and laboratory testing is readily available.  We are actively researching a solution and once we find one that is reliable and affordable, it will be business as usual."

"As you may have heard, the Texas Legislature recently passed HB 1325 to regulate legal hemp products in Texas, and the Governor signed the bill into law last month. Unlike most legislation, this new law took immediate effect on June 10, 2019. The new law distinguishes between hemp, which is now legal, and marijuana, which is still illegal.

"This distinction is based on THC content. Specifically, legal hemp is defined as "Cannabis sativa L" with a "delta-9 tetrahydrocannabinol concentration of not more than 0.3 percent on a dry weight basis."

"A problem has developed in distinguishing between newly legal hemp and illegal marijuana. At this time, the Texas Department of Public Safety Crime Lab cannot test the potency of a substance believed to be marijuana. Until DPS is able to implement this testing, there is no easy way for your officers to determine whether the substance they seize is legal or illegal. Prosecutors cannot prove beyond a reasonable doubt that the marijuana has a THC level greater than .3 percent without this type of scientific testing.

"This office will continue to prosecute mar1Juana cases. However, until the DPS Crime Lab can provide this type of testing, we will be asking your officers to seize the substance suspected to be illegal marijuana and complete a report. We can file charges at a later date, once DPS is able to purchase the new equipment and validate the protocols necessary to provide proper testing. My office will commit to filing all charges where the substance has been properly analyzed by the lab to be marijuana, even if that charge comes at a later date.

"Further, we will be able to make exceptions and file charges without a lab report in cases where the suspect makes an admission to the substance being marijuana, or where other case-specific facts can establish sufficient probable cause that the substance is marijuana and not legal hemp. However, even if those cases are filed without a lab report, we will not be able to dispose of the case or proceed to trial until we receive the results from the lab."

However, everyone caught with marijuana will be released on personal recognizance bonds.

Brazoria County District Attorney Jerri Yenne said no one will be jailed for marijuana. She said the evidence will be seized and charges accepted, but the case will not be filed in county court or presented to the grand jury until appropriate testing is conducted.

She said she is working with Commissioners on expedited plan to purchase new testing equipment and earn certification.

Says she he hopes to have this complete by the first part of next year.

Cases involving large quantities of marijuana (well beyond user amounts) will be evaluated on a case-by-case basis.

Across the state of Texas

The Texas Association of District and County Attorneys gave a detailed breakdown of the potential problems stemming from the new law. You can read about that here.

How long does it take for a lab to get set up to test for concentration levels?

Officials with the Harris County Institute of Forensic Sciences tell KPRC they are currently working on validating a method to test for THC concentration, but it could be several months before that work is complete.

Were lawmakers aware of this side effect before passing the law?

Stout is also president of the Texas Association of Crime Lab Directors. He said he and his colleagues tried to warn lawmakers about the potential problems the new law would have but “they didn't see the potential implications.”

KPRC tried to speak with the author of the bill, state Rep. Tracy King, D-Batesville, but we have not yet received a response.

KPRC also posed these questions to officials with the Texas Department of Public Safety. The DPS lab does forensic testing for law enforcement agencies across the state but said it doesn't have the capabilities to test the levels of THC at this time.