HOUSTON – A student-run newspaper at Rice University said it wanted to remind people about the importance of Martin Luther King Jr. Day, but the way they did it is getting backlash.

The Thresher has a “Backpage” dedicated to satire.

The paper said it has several fake ads that “poke fun at different events going on at Rice and in the world at large.”

The title of one of the fake ads is called, “Guilt-Free MLK Day Pass.”

The fake coupon goes on to say:

(WARNING: Some of the language in the ad is sexual in nature) 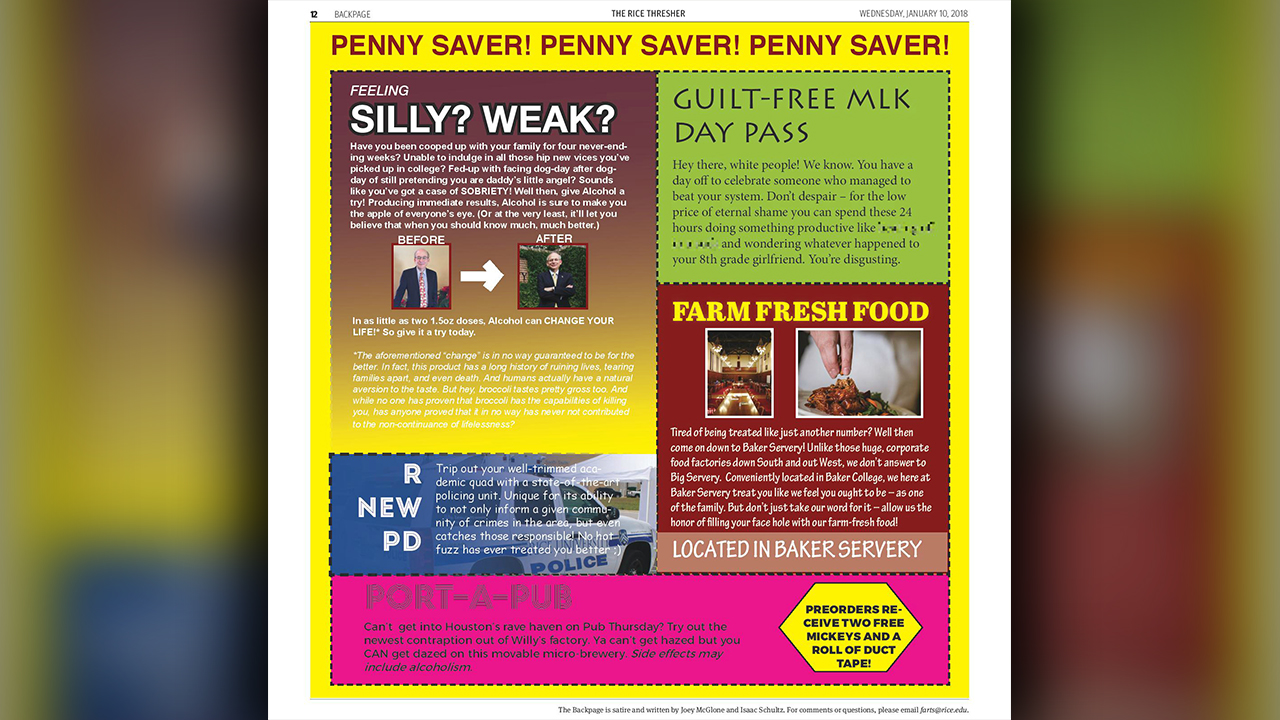 “Hey there, white people! We know you have the day off to celebrate someone who managed to beat your system.  Don’t despair - for the low price of eternal shame you can spend these 24 hours doing something productive like beating off in a sock and wondering whatever happened to your 8th-grade girlfriend. You’re disgusting.”

On Friday afternoon, the last page of the paper made the rounds on Facebook with people calling it controversial and saying it was racist and inappropriate.

The Rice Thresher’s editors-in-chief wrote an editorial on its website in regard to the complaints about the Backpage ad.

In part it said:

The paper went on to say the purpose of its content is not to harm or offend readers and “This is often a difficult line to tread with satire, which is not meant to be comfortable for everyone.”

“A satirical jab at the behavior of many white people cannot be compared to a similar jab at those that have suffered from the brutal history of racism in this country,” said Juan Saldana and Drew Keller, the editors-in-chief.

The university sent out a statement distancing itself from the student-run paper explaining that The Rice Thresher, which has been student–run since 1916, has had a long history of using its Backpage for satirical commentary.

Here is the statement:

“To clarify any confusion, the university does not manage the content in the Thresher but is very disappointed with the failed attempt at satire in this Backpage piece, which is offensive and contrary to the inclusive and tolerant values of the institution. However, we fully support freedom of speech and freedom of the press, even when we don't agree with what the Thresher prints. We hope that the Thresher takes this opportunity to learn from this incident.”

Here is what he said in a statement:

"Rice really is a place where a wide range of intellectual ideas and cultures mesh together to create a beautiful mosaic. The Thresher Backpage is student-controlled and is often used as a place for satire that sometimes misses the mark, as is the case here. However, Rice students are committed to principles of diversity, tolerance and inclusion."