Man who led officers on chase, killed 2 women after crashing into Uber in 2020 found guilty of murder, Crime Stoppers say

Ahead of elections, Asian American and Pacific Islander organizers try to break down language barriers

Lily Trieu knows the challenges facing Asian Americans and Pacific Islanders in Texas — communities that speak more than 100 languages — when it comes to participating fully in elections.

More than half of Asian Texans believe lawmakers and the government have not done enough to help them access resources like information about elections and government policies in their own languages, according to a September report by Asian Texans for Justice, a nonpartisan organization where Trieu is interim executive director.

Language gaps can also deter AAPI Texans from engaging with elections at all, an understanding that she said recently hit home for her.

While Trieu was born and raised in Texas, her mother came to the United States in the ’80s as a Vietnamese refugee. Since becoming a citizen, Trieu’s mother has voted in some but not all elections, according to Trieu. In a recent conversation, Trieu learned that the root of her mother’s voting inconsistency is not apathy but a language barrier.

“My mom really honestly said, ‘I’m not politically motivated not because I don’t care — but because I don’t speak English well and I don’t have access to information that makes me feel informed. I don’t vote because I don’t know who’s the better candidate,’” she recalled.

“If she can get access to information in Vietnamese and she can then decipher which candidate is her preferred candidate, she would happily engage.”

Trieu’s group and other AAPI organizations are trying to patch the language gaps for the midterm elections — even as several Texas counties have now stepped up their own efforts to support the rapidly growing population.

According to the nonprofit AAPI Data, more than 80% of adult Asian Texans speak a language other than English at home and close to 35% don’t speak English very well. At the national level, more than 10% of the adult Asian population who speak a non-English language at home said “language has been a barrier in voting in previous elections.”

As the AAPI population grows in Texas, languages beyond English and Spanish are starting to pop up in some counties’ resources and documents.

Vietnamese is the third-most-spoken language in the state. For the primaries earlier this year, Dallas County was mandated by federal law to translate election materials into Vietnamese because at least 5% of the county’s Vietnamese-speaking adult citizens — or more than 1,000 people — have limited English skills. Harris and Tarrant counties have offered voting materials in Vietnamese since 2002 and 2018, respectively.

Anthony Nguyen, president of the Austin chapter of the Texas Asian Republican Assembly, said his party has also previously asked him to translate various state ballot propositions into Vietnamese. “If there’s a huge need, I do see the government stepping up and trying to do translations,” he said.

But that still leaves potential voters who speak a wide range of languages who could use help. Woori Juntos is a progressive organization serving mainly the Korean community, which is one of the biggest Asian ethnic groups in Texas. Last month, it released a survey focusing on Houston, which has around 14,000 Korean Americans, and found that close to 20% want language support.

It also found that Korean-only speakers are much less likely to be registered voters than bilingual or English-only speakers within the community. 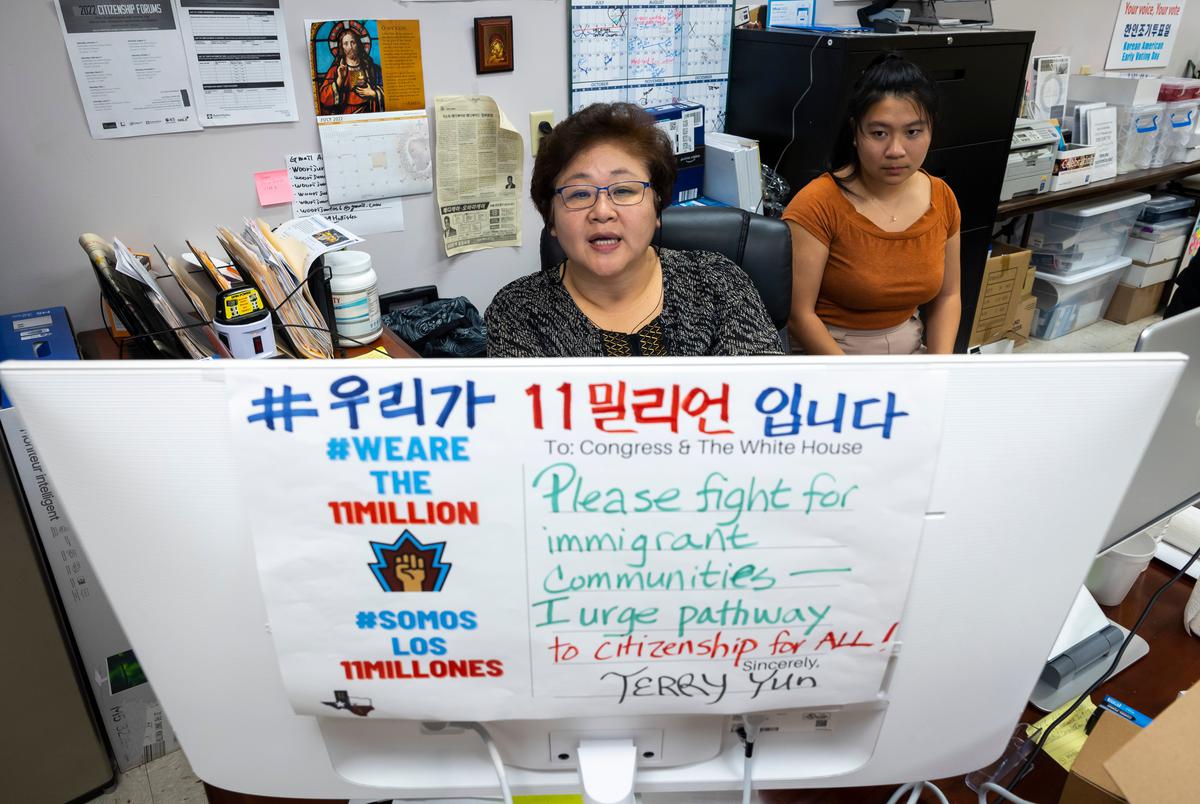 Woori Juntos Service coordinator Terry Yun live translates information provided by the ACLU into Korean during a Voting Know Your Rights Session at the Korean Community Center in Houston, TX, on Tuesday, Oct. 11, 2022. Credit: Annie Mulligan for The Texas Tribune 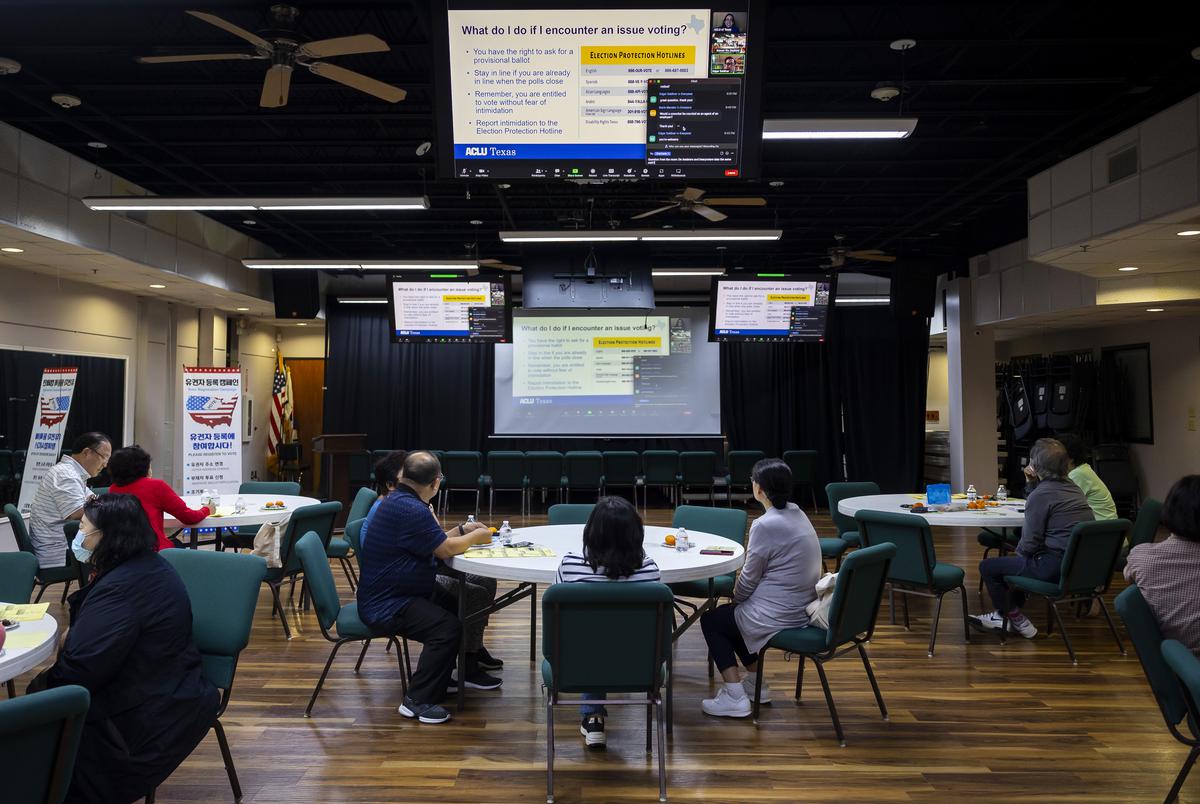 Community members listen to information from the ALCU during a Voting Know Your Rights Session organized by Woori Juntos at the Korean Community Center in Houston, TX, on Tuesday, Oct. 11, 2022. Credit: Annie Mulligan for The Texas Tribune

First: Woori Juntos service coordinator Terry Yun translates voting information provided by the ACLU into Korean during a live Know Your Rights session at the Korean Community Center in Houston on Oct. 11, 2022. Last: Community members listen to information from the ALCU during the session. Credit: Annie Mulligan for The Texas Tribune

On the other hand, South Asian community members such as Indian and Pakistani Americans are generally well equipped because many already know English, said Chanda Parbhoo, a progressive organizer and founder of South Asian Americans for Voter Education + Engagement + Empowerment. But she acknowledged that it can still be a problem for older voters.

“We have many different languages within the South Asian community, so we’re trying to create a network of people who we can rely on to answer questions,” she said.

Like Parbhoo, other AAPI organizers have been busy addressing the language gap for the midterm elections.

Nabila Mansoor, president of Asian American Democrats of Texas and executive director of progressive organization Rise AAPI, said Rise AAPI has been working with partners to train volunteer deputy registrars in various languages such as Hindi and Urdu. Pulling from the survey’s findings, Woori Juntos will continue to provide interpretation and translation to not only Korean but also Vietnamese, Mandarin and Spanish. And inspired by The League of Women Voters of Texas’ initiatives, Asian Texans for Justice has translated voting guides — including not just resources but also Q&As with candidates in the greater Houston, Central Texas and Dallas-Fort Worth areas — into Vietnamese and Chinese.

General organizations like the Texas Civil Rights Project are also stepping up. According to Hani Mirza, legal director of the TCRP’s voting rights program, it is advertising its election protection hotline on ethnic radio stations and in several languages. 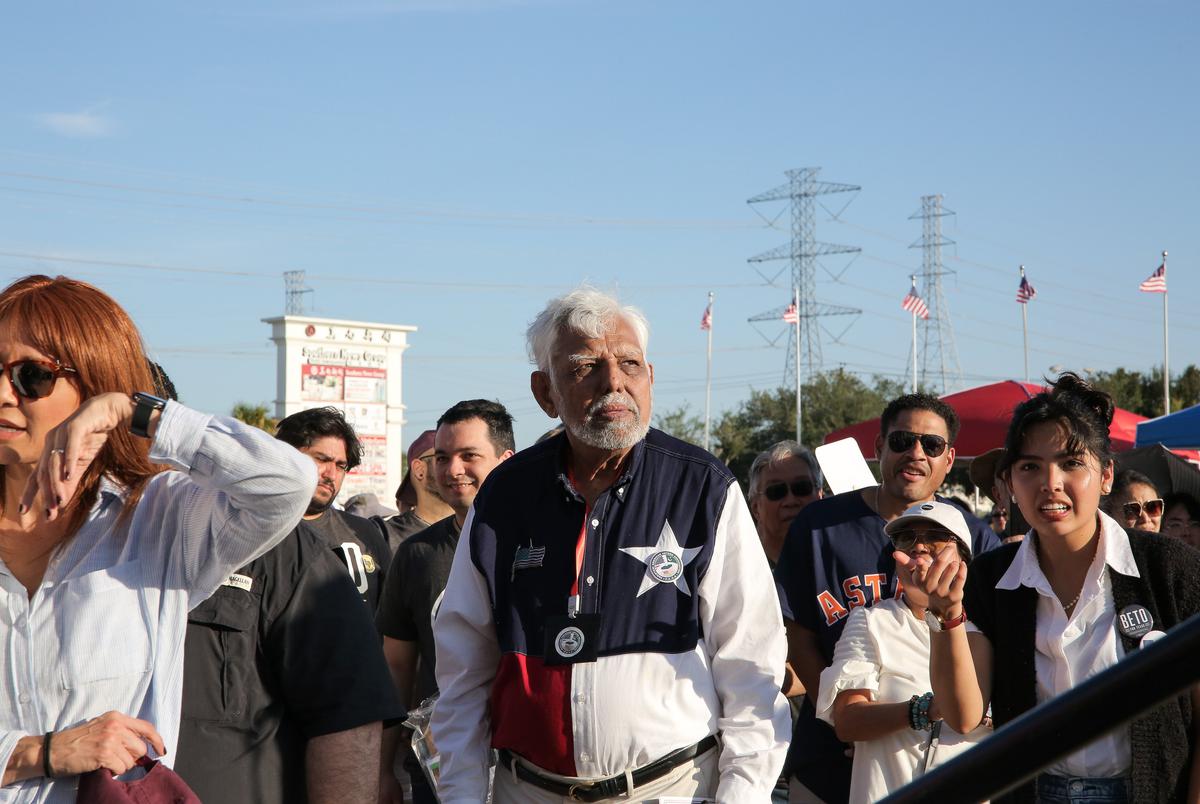 Abdur Khan of Pakistani American Voters, an organization that engages its community in the political process, attends a Get Out the Vote rally hosted by the Asian American Democrats of Texas in Houston’s Asiatown on Oct. 15, 2022. Credit: Briana Vargas for The Texas Tribune 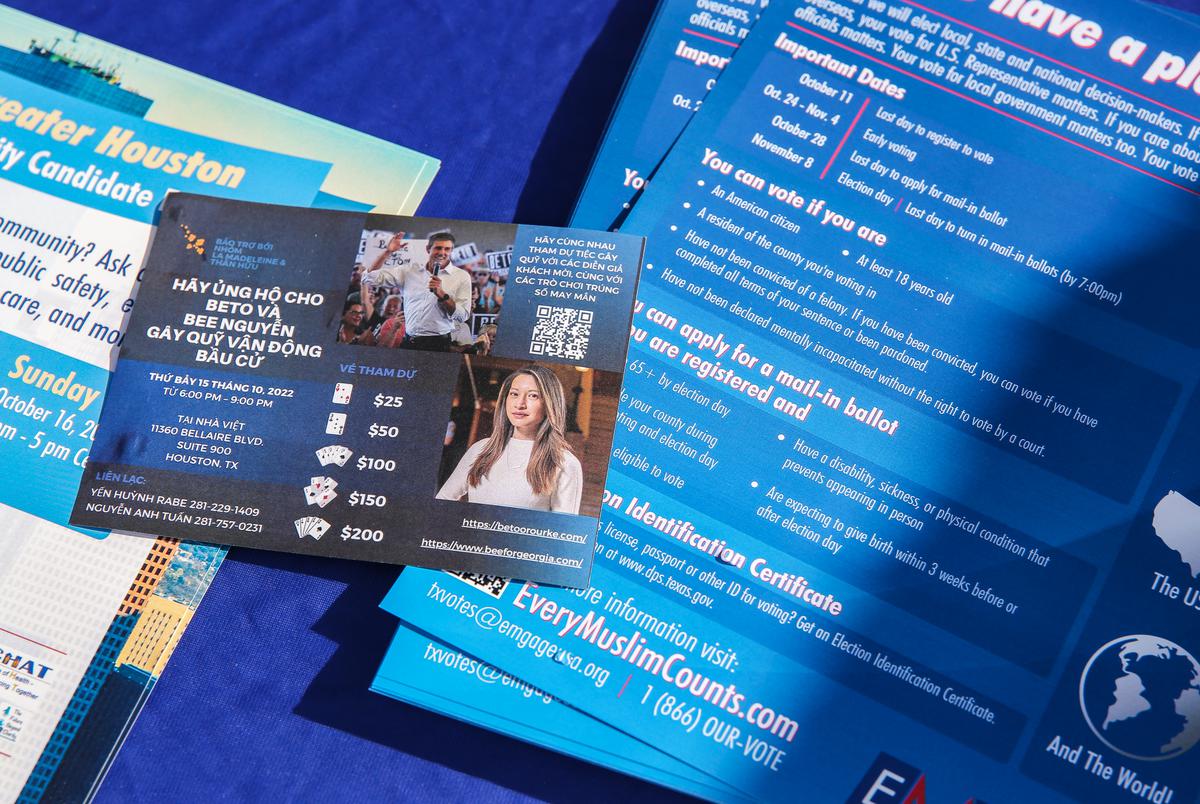 Emgage Texas provides voting materials during a Get Out the Vote Rally hosted by the Asian American Democrats of Texas in Asiatown on October 15, 2022. Credit: Briana Vargas for The Texas Tribune 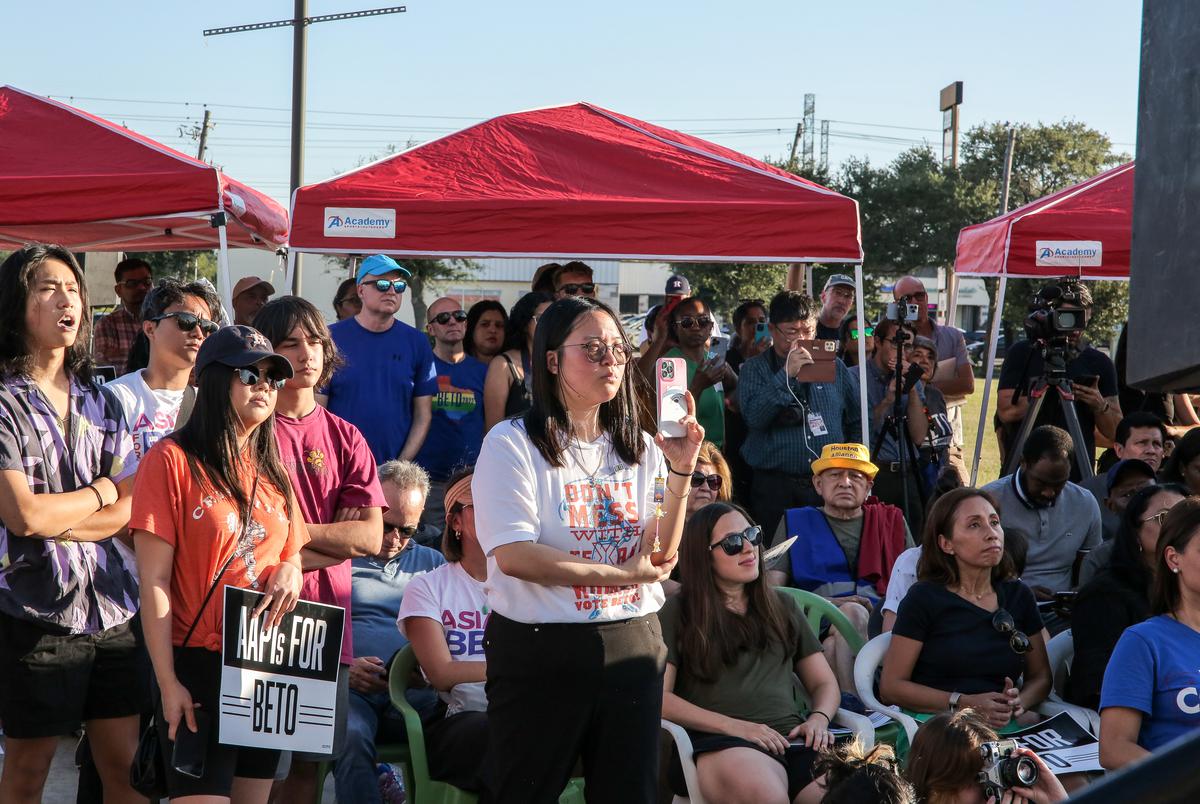 Attendees listen to Gubernatorial candidate Beto O'Rourke speak during a Get Out the Vote Rally hosted by the Asian American Democrats of Texas in Asiatown on October 15, 2022.

Mirza added that his organization is paying close attention to how recent legislative changes affect AAPI voters. Last year, Texas lawmakers rolled back various voting initiatives that were popular with voters of color in 2020. In particular, the law initially curbed how much assistance could be provided to voters with limited English skills and voters with disabilities, including creating potential criminal penalties for violators.

A July national survey from a trio of AAPI organizations found that more than 42% of Asian Americans who speak a non-English language at home would use voting assistance in their own language if possible. For individual groups, this figure gets close to 50% for Chinese voters and above 50% for the Vietnamese and Korean communities.

“Language access is one of the biggest ones,” Mirza said. “Then there is the regular type of voter suppression that we see happen across the board, and it’s especially pernicious with minority groups, including the AAPI community.”

In July, the restriction on voter assistance was struck down in court. It was not the first time Texas lost a lawsuit on language access at the polls. In 2017, a federal appellate court ruled against the state’s law restricting language interpreters at the ballot box— a decision that resulted from a case involving Mallika Das, a Bengali-speaking citizen in Williamson County, who could not get interpretation help from her son while voting in 2014.

But Mirza said some worries remain.

“We’ve seen a real concern and fear in trying to help voters get to the polls and providing assistance at the polls with language assistance earlier this year,” he said. “I think some fear still exists.”

Ultimately, many organizers say broadening language accessibility is about politicians and candidates meeting AAPI voters where they are at — beyond just translating voting materials. They recommended that politicians and candidates hire linguistically diverse staff or partner with local organizations to engage with the community organically, such as by visiting AAPI-dense areas, boothing at cultural events or establishing a presence in ethnic media.

“The most valuable thing you can spend is your time,” said Mark Sampelo, who works on various Filipino American initiatives and community events including Lone Star Palengke market in Plano. “It’s a lot easier for folks to say ‘Wow, they’re coming, this is important.’”

Disclosure: League of Women Voters of Texas has been a financial supporter of The Texas Tribune, a nonprofit, nonpartisan news organization that is funded in part by donations from members, foundations and corporate sponsors. Financial supporters play no role in the Tribune's journalism. Find a complete list of them here.