Nutcracker Market Spring 2022: What you need to know about tickets, details of this year’s event

PHOTOS, VIDEO: This is what the scene looked like after 3 HPD officers shot near Midtown

At its peak, the mass COVID-19 vaccination site at the Kelly Reeves Athletic Complex in Williamson County was administering about 4,000 doses per day.

Now it’s half that.

County health officials will close the North Austin drive-thru hub in mid-May, shifting the responsibility to a growing number of doctors, pharmacies, public health offices and other smaller providers who have closer relationships with and easier access to the county’s estimated 200,000 eligible residents who haven’t yet gotten vaccinated.

“We’re still moving along,” said Jen Stratton, director of communications for Family Hospital Systems in Williamson County, which partners with the county to run the hub. “Our focus is just changing.”

It’s part of a new approach by health officials across the state to get vaccines moving again as Texas confronts the next chapter in its massive vaccine rollout: Its first dip in demand and glut in supply since vaccinations began last winter.

On Friday, Texas health officials sent letters to the state’s nearly 8,000 registered vaccine providers that some 280,000 doses would be coming into the state’s warehouse next week and are up for grabs.

Starting this week, the state will start only asking the federal government for doses that providers have ordered, as opposed to asking for as much as they can get, an agency spokesperson said.

“I encourage you to consider what you can do to make one more big push to quickly vaccinate those who are willing,” read a letter from the Texas Department of State Health Services Commissioner John Hellerstedt to vaccine providers on Friday. “This is our path out of the pandemic and back to normal lives.”

Both state and local health officials predicted months ago that the tables would eventually turn from not enough supply to more than enough.

“It happened with H1N1 [the “swine flu” pandemic of 2009-10] too. As it happens in all of these types of events,” said Dr. David Lakey, vice chancellor for health affairs and a chief medical officer at the University of Texas System, and a member of the state's Expert Vaccine Allocation Panel. “Early on, there is so much more demand than there is supply. And then it quickly tips in the other direction, where supply exceeds demand.

“So the state right now has a lot of vaccine in freezers, and other providers have vaccines in freezers, that they’re trying to get out to individuals.”

Just over a third of the state’s 22 million eligible Texans — people 16 years and older — are already fully vaccinated against the virus that has killed almost 50,000 in Texas in the past year. The earliest among those recipients lined up in hourslong queues, added their names to monthslong online waiting lists, and buzzed distribution sites at the end of the day hoping for a chance to receive unused doses as demand far outstripped supply.

The state’s effort to reach the ones still out there — the hesitant, the unaware, the inconvenienced and the overworked among the 12 million as-yet unvaccinated eligible Texans — includes trucks driving through small rural towns with LED signs, a $1.5 million-dollar TV and digital ad campaign, and a truck with a large video screen stopping at Walmart parking lots in 22 Texas cities, playing five-minute loops customized for each stop with ads, local leaders encouraging residents to get vaccinated, and testimonials pulled from social media.

Locals are also brainstorming ways to lure in people with gifts — Harris County may offer bobbleheads of baseball star Jose Altuve of the Houston Astros — and encouraging private companies to donate gift cards as incentives. They’re sending out emergency cellphone alerts, touting the vaccine on digital freeway traffic signs, running pop-up vaccine clinics in workplace break rooms and hanging sign-up sheets at the back of churches during Sunday services.

The messaging and the shift to smaller providers is the natural next step, state health officials said, in “the next phase” of the campaign to drive demand for the vaccine. 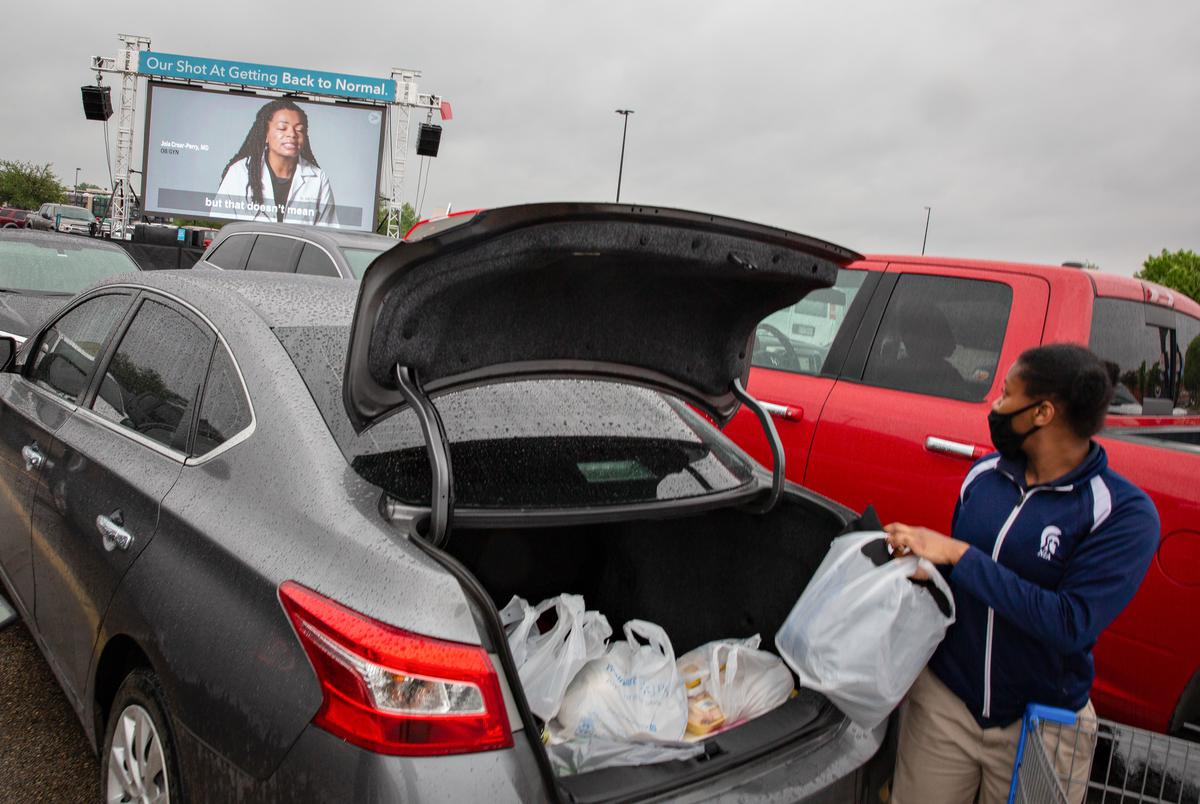 Shoppers load their cars with groceries as a Texas Department of State Health Services advertisement encouraging people to get the COVID-19 vaccine plays in a Walmart parking lot in Fort Worth on April 30, 2021. Credit: Shelby Tauber for The Texas Tribune

“Our research shows that individual health care providers are the most trusted voices for people deciding whether to get vaccinated,” Hellerstedt said. “Over the coming weeks we will continue to share messages encouraging various communities to get vaccinated. We are also relying on trusted voices within those communities to speak up and let their neighbors know that these COVID-19 vaccines are safe, effective and the best way to end the pandemic and restore normalcy.”

The new messaging push is made possible by the fact that Texas is now getting three times more vaccine every week than it was in January, when officials were hesitant to encourage a lot of demand for a vaccine they didn’t have.

It’s also made necessary by the fact that many of these Texans have to be found, convinced, and then vaccinated on their terms, Lakey said.

“It’s going to be a harder process to get the next group of individuals immunized,” Lakey said. “The ones that were really anxious [to get vaccinated], I think, have been immunized at this point.”

On the local level, officials are closing hubs in some places, like Lubbock, while allowing walk-ins and extending hours in others, like Harris County, which saw an uptick in recipients at its NRG Park site after staying open until 9 p.m. over the weekend.

In Williamson County, the county reduced its waiting list from more than 200,000 in January to about one-tenth of that — and then shut it down two weeks ago after only 5% of the remaining names on the list were showing up for appointments. County Judge Bill Gravell urged residents to talk to their doctors if they want to get the shot and predicted herd immunity in the county by the end of May.

Soon, communities will be able to apply for a portion of $10 million state health officials have earmarked for grants to help locals find and fund creative ways to push out their vaccines.

Although vaccination is more of a health issue than a political one, the approach some health officials are taking is not unlike candidates’ efforts to reach voters, said Rafael Lemaitre, spokesperson for Harris County Judge Lena Hidalgo.

“In many ways, this has to be a political campaign,” Lemaitre said.

Indeed, much of the ground game is the same: Grassroots advocacy, block-walking, word-of-mouth efforts, and even population data analysis.

In East Texas, where vaccination rates have dropped dramatically in some areas, state health officials cross reference census and demographic information with the state’s vaccine registry system to find residents who haven’t been vaccinated yet. Then they talk to those residents to find out what their challenges are, said Dr. Sharon Huff, regional DSHS director in Tyler.

The district has started reserving Fridays for second doses, which have a higher instance of mild flu-like side effects in some people, so that symptoms don’t interfere with typical work days, she said. Her office has also convinced some employers to give workers time off or host clinics on site.

Huff’s office has also started bringing all three brands of the vaccine to events to accommodate people who, for religious or other reasons, want one vaccine over another.

Huff’s office has engaged the help of county judges and pastors to discuss questions or concerns by those who are hesitant, held clinics at rural Black churches and community centers so that people can get the shot where they normally gather, and even knocked on doors in low-income apartment complexes to pass out fliers and talk with residents.

When staffers at a small-town vaccine event get word of a person nearby who is housebound — usually from a local official who knows everyone in town — Huff sends over a nurse with a single dose in a syringe to check that person off the list.

It’s a slower, more deliberate approach than the frenetic triage that characterized the first few months, Huff said. But each little action brings the state closer to its goal of protecting Texas from the devastating impact of the virus.

It may only be 100 doses administered in her region a day, as opposed to the previous daily rate closer to 1,000, Huff said. But it has a ripple effect and, more importantly, keeps the vaccine moving — even if it’s at a slower pace than before.

“I think what we’re doing is working,” Huff said. “We don’t get a lot of numbers, but I do think we’re reaching the people that need to be reached, and if anything, that helps spread the word.”