In a since-deleted Facebook post, Republican Congressional candidate Jamie Berryhill compared a borderless country to a woman whose value was diminished because she was sexually assaulted.

"A nation without borders is like a woman raped and defiled, her precious value pillaged and taken,” the post read, according to a screenshot captured by CBS7. 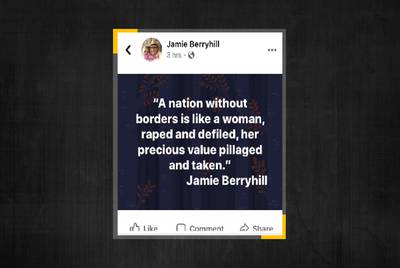 The post was uploaded Tuesday evening and was deleted later in the day, reported CBS7.

"Our nation is like women. If our borders are being encroached, it is like a woman. Like a precious woman, a person that is being defiled by an unruly infiltrator," Berryhill told CBS7.

The Odessa business owner is one of the more serious candidates in the 10-way Republican primary to replace retiring U.S. Rep. Mike Conaway, R-Midland. The district is safely Republican.

Berryhill has been endorsed by groups including the House Freedom Fund, which is affiliated with the conservative House Freedom Caucus, as well as the anti-abortion Texas Right to Life.

The primary was shaken up last week when President Donald Trump endorsed one of the leading candidates, August Pfluger. Berryhill and several other Pfluger rivals have since banded together to decry outside influences in the primary.

Texas Democratic Party spokesman Abhi Rahman said in a statement that Berryhill’s comment is not an isolated incident. Rahman cited Berryhill’s “refusing to reauthorize the Violence Against Women Act” and support of Trump, who has has also been accused of sexual assault by women.

“To every Texas Republican who refuses to condemn Berryhill: silence is the same as being complicit,” Rahman said in a statement.