Ask 2 Traffic: What is recycled asphalt?

Published: February 4, 2020, 12:01 am
Tags: Politics
Homeless Austin residents say life at the shelter in the southeast Austin neighborhood of Montopolis is an improvement for them — but still an incomplete solution to life without steady shelter. Eddie Gaspar/The Texas Tribune

On a January afternoon, Pam Reynolds pushed her wheelchair across the pavement of a Texas Department of Transportation facility in Austin that Gov. Greg Abbott turned into a temporary shelter for people experiencing homelessness. She was flanked by a black Labrador puppy and her tent neighbor, Amy, who was carrying rain-soaked blankets that were still dripping.

Reynolds said she slept on the soaked sheets for three nights before someone helped her exchange them for a dry set from another resident. Before Abbott and state officials transformed the facility into a shelter, Reynolds lived in the concrete underbelly of State Highway 183 in the state’s capital.

“I’ve been beaten up, nearly raped, except I fought for my life,” Reynolds said.

So is life in the governor’s camp better than life under a highway?

“I guess,” Reynolds said as she stared past the tree line.

Homeless Austin residents say life at the shelter in the southeast Austin neighborhood of Montopolis is an improvement for them — but still an incomplete solution to life without steady shelter. And some still feel stigmatized and targeted by the governor’s claims of increased crime involving homeless people and routine clearings of homeless communities elsewhere in the state’s capital.

Abbott, a Republican, has used recent assaults allegedly perpetrated by homeless Austin residents to criticize city officials for changes to its camping ordinances, though he hasn’t provided a direct link between those rules and violent behavior.

After a homeless man was accused of stabbing another resident experiencing homelessness Jan. 8, Abbott ordered the Texas Department of Public Safety to increase patrols downtown and around the University of Texas.

After the Austin Police Department arrested a woman for allegedly stabbing several people in downtown Jan. 24, Abbott said Austin official’s choice to relax the city’s camping ban was allowing “lawlessness” and corresponds with a “rise in violence,” though he did not provide crime statistics to back up the claim.

And on Saturday, after a CBS Austin report in which witnesses to a stabbing said they believed the suspect was homeless, Abbott tweeted that state lawmakers will “override Austin’s reckless policies.”

The Austin Police Department has not responded to questions about whether there has been an increase in violent crime correlated with the ordinance changes. 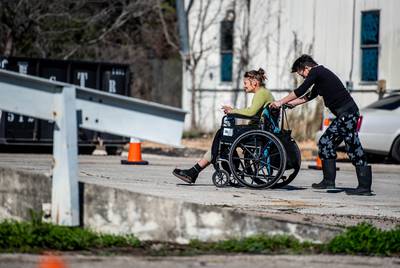 Life at the camp

At the shelter, residents are assigned spots to pitch tents and are given packages of food three times a day. About a dozen of the spaces are covered, while others are not.

There are also port-a-potties and hand-washing stations at the front of the camp. A state trooper is posted at the site 24 hours a day for security.

During its first week as a shelter in mid-November, 22 homeless residents started camping there, according to the Texas Division of Emergency Management. That number has recently grown to 107 residents.

Among the state agencies involved with the temporary shelter, none will claim oversight or leadership. The Texas Division of Emergency Management seems to have the largest share of daily work; it distributes food packages three times a day and assists with third-party donations to the camp.

Residents like Reynolds and Manuel Baez, who was a handyman before the Great Recession, said one of the best benefits of Abbott’s camp was the stability of having assigned spots to return to every night.

While his wife heated lunch — a mixture of canned tuna, boiled eggs and onion — Baez compared his time at Abbott’s camp with his time sleeping near the Terrazas Branch of the Austin Public Library on East Cesar Chavez Street.

“We’re better over here because nobody messes with you. It’s your own place. We all try to get along. Sometimes we got problems because people are different, but we try to get along,” Baez said.

Baez and Reynolds also said they worry less about violent crime because state troopers offer a constant police presence. However, some residents said they are still robbed by their fellow homeless residents like they were under highways.

On a recent afternoon, Barbara Terrell gave a goodbye hug at a nearby bus stop to a friend who had come to visit her at the camp. She said she wanted to leave with him, but she didn’t have a bus pass. She said the bus fare was relatively expensive for residents of the camp.

“They should’ve gotten bus passes or some way for us to get out. Because a lot of people don’t have bus passes, so you can’t really go anywhere,” Terrell said.

Being stuck without transportation was the primary complaint from shelter residents. Reynolds said they don’t have access to grocery stores, medical care or fresh clothing because of the camp’s distance from Austin’s urban core. The camp is a two-hour walk from downtown.

According to Tammy Quinn, who is the program manager for Capital Metro, the company provided a bus stop to the campsite at the request of TxDOT.

“There are no resources over there that are in walking distance,” Quinn said.

First: LaShawn Ramsey rides his bike in front of state emergency vehicles while Stephanie Baez's family has lunch at the campsite. Last: The former TxDOT facility has been repurposed as a state-sanctioned homeless camping site for Austin residents.

Austin Mayor Steve Adler has criticized how Abbott tweeted videos of crimes and attributed them to homeless residents without verifying the suspects’ housing status. Adler has also called the governor’s responses examples of “demonizing” homeless people. LaShawn Ramsey, who lives at the governor’s camp, agreed with Adler’s description.

Katherine Juarez lives under Interstate 35 and said it’s not just the governor’s words but also his temporary solutions that make her feel like a criminal.

“They tell us that we have to move our stuff across the street every Monday. So we go and take it over to Wendy’s, and we get criminal trespass while we’re waiting for them to clean under the freeway. They set us up,” Juarez said.

John Buckner, who lives under Interstate 35, said he agrees with the governor’s approach to homelessness but takes issue with “how he demonizes it” and is skeptical of the governor’s claim of increased crime linked to the camping ordinance change.

“The [crime rate], has it really increased much, or is it the same or is it less?” Buckner said. “That’s what I want to know. You’re not giving me an example. You’re just saying, ‘Look, someone got stabbed,’ so that they pass the policies. No. Tell me how many people were being stabbed before the policy change.” 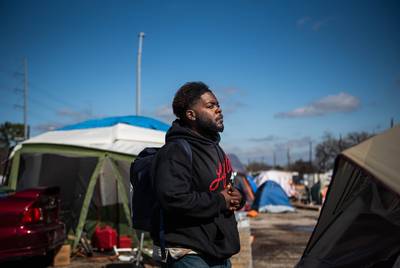 Abbott’s recent actions were announced as temporary solutions to homelessness, but details of the state’s long-term strategy aren’t known.

“Gov. Abbott is committed to ensuring that adequate resources are provided to unsheltered Austinites to help them transition out of homelessness, while continuing to work with private-sector and faith-based organizations to develop more long-term solutions beyond this temporary camping space,” said John Wittman, a spokesman for the governor.

Seth Christensen, a spokesperson for the Texas Division of Emergency Management, said his agency doesn’t provide mental health and drug addiction treatment or job training, and he doesn’t know of any state agency that does.

“The governor has provided a safe place for the homeless to go. [Private providers] don’t have to go hunting for them in the woods or under bridges ... but those interactions are between the individuals and the providers,” Christensen said.

Last year, Gary Painter, director of the Homelessness Policy Research Institute at the University of Southern California, told the Tribune that the “housing first” model is an approach to homelessness that seeks stable housing for people before addressing issues like addiction and mental illness.

“While it might be more expensive because you are providing housing, it ends up saving money,” said Painter. “It is at least [as] cost effective as the other model and also certainly much more effective.” 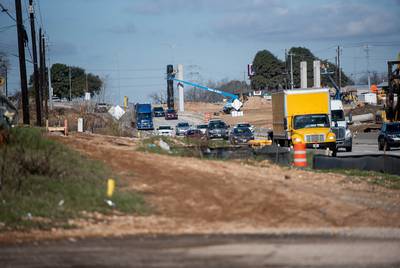 The bus stop at the campsite is on a muddy path. “There are no resources over there that are in walking distance,” said Tammy Quinn, program manager for Capital Metro. Eddie Gaspar/The Texas Tribune

Residents of Abbott’s camp say they appreciate temporary answers but are also looking for long-term solutions.

“They’re saying they’re doing something, but they’re really not, so we’re out here surviving on our own,” Ramsey said. “They have boxes with water hoses calling it a shower. How can we wash to be able to get off our feet to actually get a job?”

Terrell is maintaining her skepticism of the governor’s long-term strategy for homelessness.

“I’m thankful to the governor for opening the camp because it’s a better option than being in lawless hands,” Terrell said. “However, it’s confusing to hear him advocate harsher treatment and further criminalization of the most vulnerable. I feel he is playing into the haters by raising his torch. It makes me wonder what his intentions are to me and the others living at his camp.”

Disclosure: Steve Adler, a former Texas Tribune board chairman, and the University of Texas have been financial supporters of the Tribune, a nonprofit, nonpartisan news organization that is funded in part by donations from members, foundations and corporate sponsors. Financial supporters play no role in the Tribune's journalism. Find a complete list of them here.