EL PASO — Joel Estebane’s commercial truck had already been inspected by U.S. Customs and Border Protection officers after crossing the bridge that connects Ciudad Juárez and El Paso on Tuesday afternoon — then he had to wait another hour in another line where Texas state troopers were questioning commercial drivers.

Estebane, who was on his way to pick up office and paper supplies from El Paso to haul to Juárez, said it took six hours to get his truck through El Paso’s port of entry. Troopers had set up a state inspection site next to a condominium complex and the local zoo where they stopped and questioned truck drivers about their cargo.

When it was Estebane’s turn, he said the troopers had already left, but the long line had added hours to his trip. He said it usually takes him between half an hour to an hour to get across the bridge.

“This disrupted my day,” Estebane said as he waited outside a warehouse while his truck was being loaded. “This is affecting firms on both Mexico and the U.S. side.”

Near the other end of Texas’ roughly 1,200-mile border with Mexico, in the Rio Grande Valley, no commercial vehicles crossed the busiest bridge in the region at all on Tuesday because for the second straight day, truckers on the Mexico side of the Pharr-Reynosa International Bridge blocked all north- and southbound lanes in protest of Gov. Greg Abbott’s move to have state troopers inspect northbound commercial vehicles after they have already been searched by federal officers.

Normally, 3,000 commercial trucks cross the Pharr bridge each day, hauling about $60 million to $70 million worth of daily goods and services through the busiest land crossing for produce entering the U.S. from Mexico.

The ripple effects of Abbott’s decision last week to order the Texas Department of Public Safety to increase its inspections of commercial vehicles have been swift up and down the Texas-Mexico border. Abbott’s decision was a response to the Biden administration’s recent announcement that it plans to end Title 42 — a pandemic-era emergency health order that lets federal officials turn away migrants at the border without the chance to request asylum. 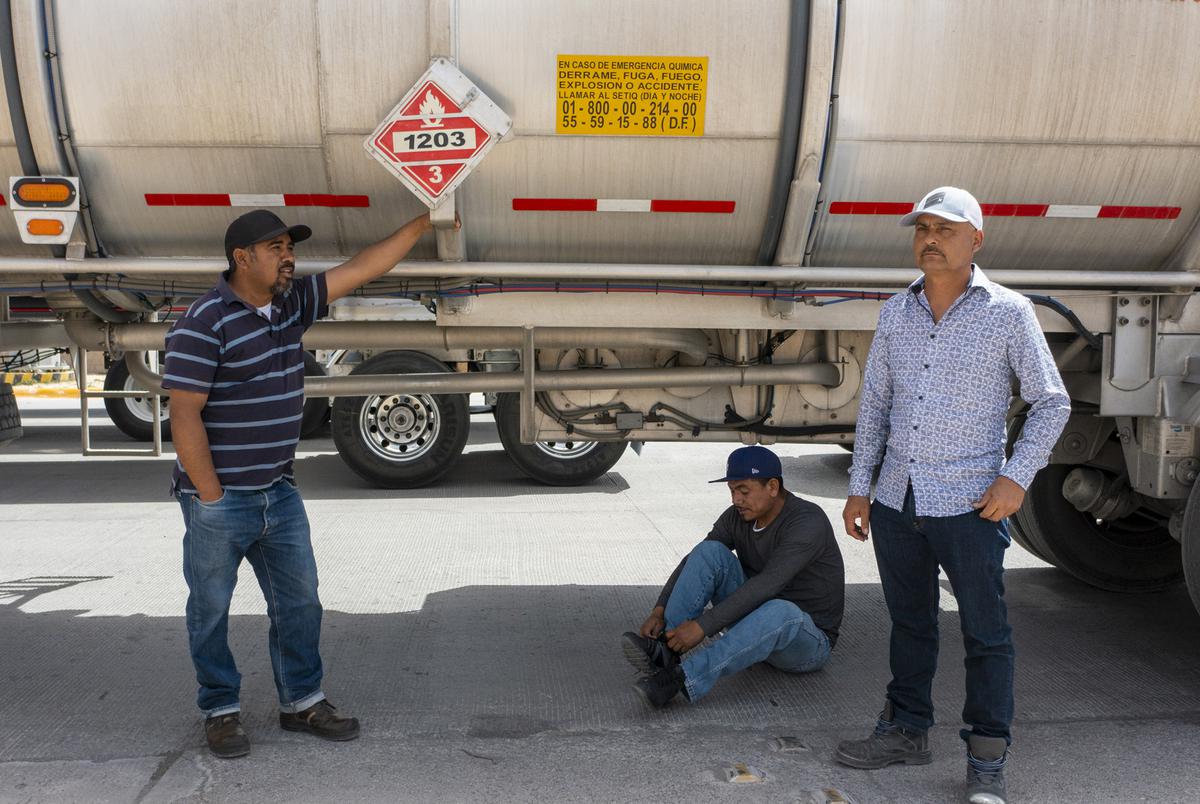 Truck drivers wait in the shade by their vehicles at the Ysleta Port of Entry, Tuesday, in Juarez, Mexico. Credit: Ivan Pierre Aguirre for The Texas Tribune
Ad

Increasing inspections of commercial vehicles, Abbott said, would disrupt drug cartels’ use of commercial trucks to smuggle humans and drugs into the U.S.

But six days into the new Texas initiative, it’s unclear how thoroughly the DPS is inspecting commercial vehicles — and whether state troopers are even opening up trucks’ cargo areas to look inside. It is also unclear whether the DPS has seized any drugs or encountered any undocumented migrants through the new program. The agency did not respond to requests for comment for this story.

Typically when a commercial truck crosses from Mexico into the U.S., Mexican authorities first clear the driver’s paperwork before U.S. Customs and Border Protection officers inspect the vehicle on the other side of the international bridge — using an array of tools designed to spot hidden people and illegal drugs.

Gil Kerlikowske, former commissioner of CBP from 2014 to 2017, said the controlled areas where U.S. agents work at the bridges are “a Constitution-free zone, as the ACLU used to tell me. CBP has this complete right to completely search vehicles, including taking them apart.

“The number of K-9 [dogs] they have to look for drugs, the X-ray machines, they got really good at this — you’ll see them be able to tap the sides of cars, panels of vehicles and locate whether there’s a false panel or something’s been concealed,” Kerlikowske added.

At the larger commercial ports of entry, there are usually other federal agencies on hand to do specialized inspections, such as the Department of Transportation or Food and Drug Administration to help make sure vehicles and products meet U.S. standards. Then, some trucks are stopped at a state-owned facility to make sure their vehicle is safe to drive in Texas — or an “audit,” as some people in the cross-border trade industry have called the DPS checks.

“Normally, DPS inspection has to do with safety of the trucks, making sure they have proper equipment, the right tires, following the rules here,” said Ernesto Gaytán, chair of the Texas Trucking Association.

But never before has DPS checked every commercial vehicle entering Texas from Mexico, according to interviews with veterans of the cross-border trade industry.

“In my 25 years in the trucking industry, DPS has never done audits of 100% of the trucks. That's unheard of,” said Leopoldo Chow, who owns trucking carriers in the U.S. and Mexico and is an adviser to CANACAR, Mexico’s national trucking association. “If you were going to do the same audit of trucks between Austin and Dallas on I-35, you would have trucks sitting from Austin to Dallas. It's just not feasible.”

The delays at the bridges triggered by the DPS inspections have led to a 60% drop in commercial traffic at the Texas-Mexico border in just a matter of days since Abbott’s initiative started, according to CBP.

“The longer than average wait times – and the subsequent supply chain disruptions – are unrelated to CBP screening activities and are due to additional and unnecessary inspections being conducted by the Texas Department of Public Safety (DPS) at the order of the Governor of Texas,” CBP said in a written statement. 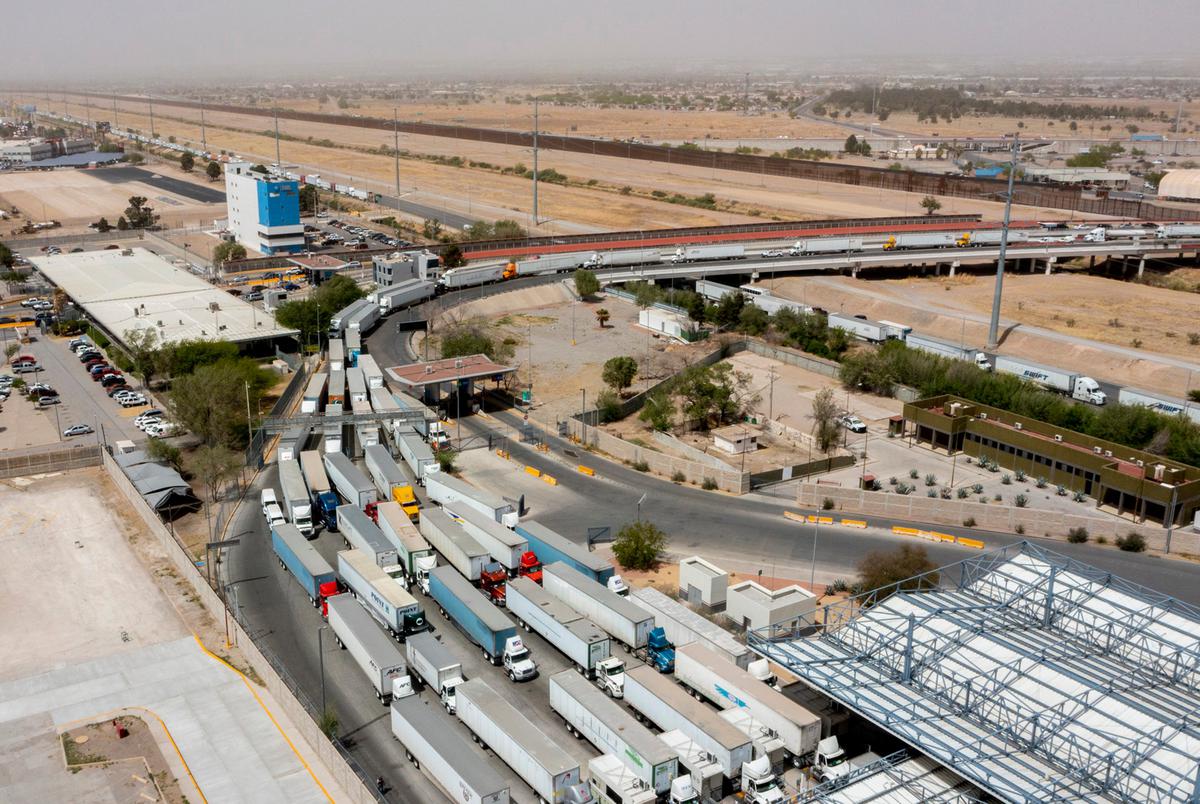 Hundreds of semi trucks headed southbound into Juárez, Mexico were at a standstill at the El Paso Ysleta Port of Entry Tuesday. Credit: Ivan Pierre Aguirre for The Texas Tribune

Texas Agriculture Commissioner Sid Miller, who was sworn into office in 2019 at the Pharr bridge to help ring in that year’s produce season, piled on criticism of Abbott’s new policy.

Miller said Abbott should “cease his truck inspection project,” and that the “inspection program is turning a crisis into a catastrophe.”

“The Department of Foreign Affairs rejects this state measure that significantly harms the flow of trade between our two countries,” the statement said. “As an inevitable consequence of this provision, businesses in Mexico and the United States are losing competitiveness and significant revenues.”

Truckers typically cross multiple truck loads per day, driving goods from Mexican border towns into U.S. border towns, where they can be picked up by a different truck that hauls the load to its final destination. The Mexican truckers then usually turn around and return to Mexico to pick up another load of goods.

In Ciudad Juárez, Antonio Ramos, who has transported gasoline across the border for two and half years, said Tuesday afternoon that he had been waiting to cross another El Paso-Juárez bridge for 36 hours. The average wait time at that port of entry is 23 minutes, according to CBP’s website.

Truckers blocking the Mexico side of the bridge in protest of Abbott’s new program have prevented Ramos and hundreds of other commercial vehicles from crossing. 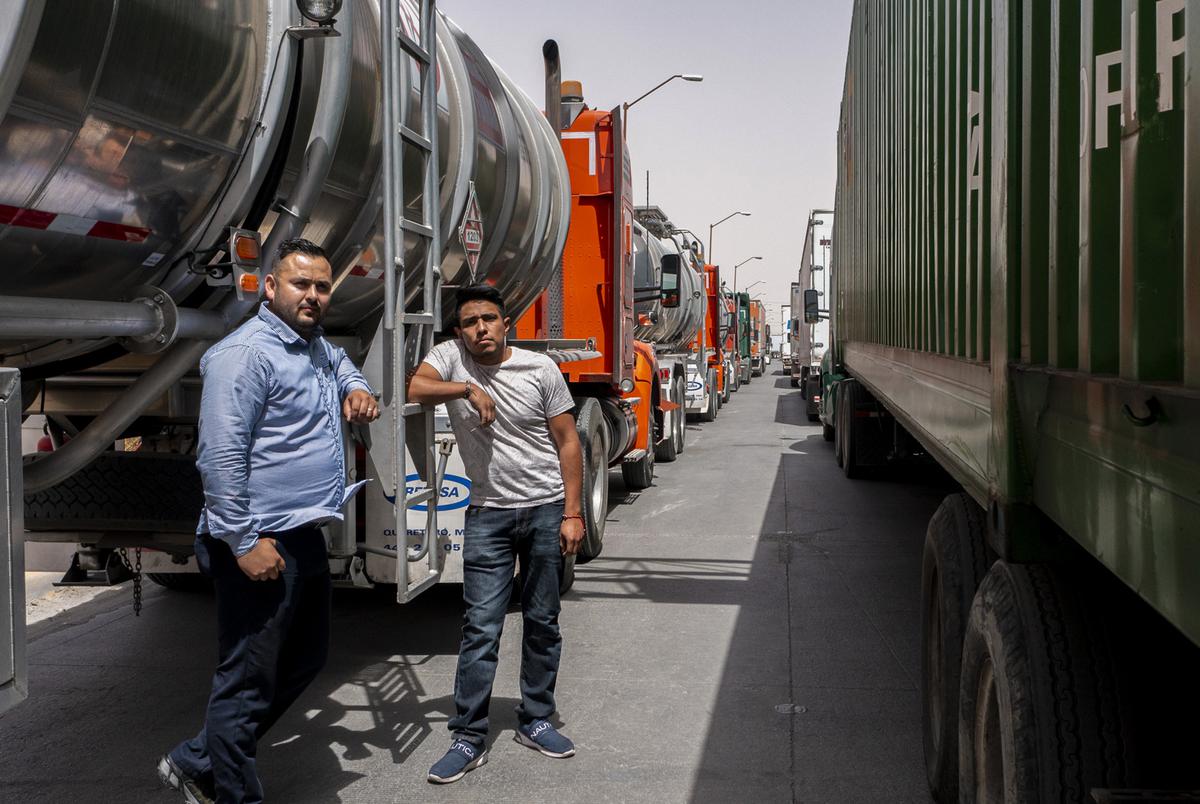 Pedro Avendaño said he had been in the same long line since 2 p.m. Monday to cross into El Paso to pick up medical products and supplies. He said he understands the governor has to be on top of security issues, but the new inspections are affecting people’s livelihoods.

“They just need to let us [the truckers] work,” Avendaño said as he leaned against his 18-wheeler Tuesday afternoon in Juárez. “We have nothing to do with whatever the state is trying to do. And this is affecting not just our economy but their economy, too.”

Oscar Gutierrez, who got his 18-wheeler in line at 9 a.m. Tuesday to haul ladders to El Paso, said the truckers’ protest is inconvenient but it’s needed because Mexican truckers don’t get paid enough to go through additional inspections. The truckers need to send a message, he said.

“They need to stop being even stricter,” he said. “[CBP] were already doing inspections before all this and there were no issues.”