“Happy to see you again”: U.S. reopens land borders with Mexico to vaccinated travelers after 19 months

EL PASO — The Solis sisters were excited to return to El Paso nearly two years since their last visit.

After waiting 30 minutes to cross the international bridge that connects Ciudad Juárez to El Paso on Monday, 23-year-old Elizabeth Solis took out her iPhone to begin recording her experience walking onto the American side, 20 months after her last visit. Before the COVID-induced travel restrictions, she said they would go to El Paso every weekend to visit aunts, uncles and cousins.

She and her sister, Adamaris Solis, 22, were heading to McDonald’s to get coffee and egg McMuffin and McGriddle sandwiches. Then they planned to shop in downtown El Paso, where they used to buy all their clothes before the pandemic started. They said what they missed the most about El Paso were the people.

“There’s a lot of insecurity [in Juárez] so people are a bit more defensive there,” the younger Solis said. “And people here are just more polite.”

As people crossed the international bridge from Mexico by foot or vehicle, three people with a local radio station held signs that read “Happy to see you again” and “We missed you.” 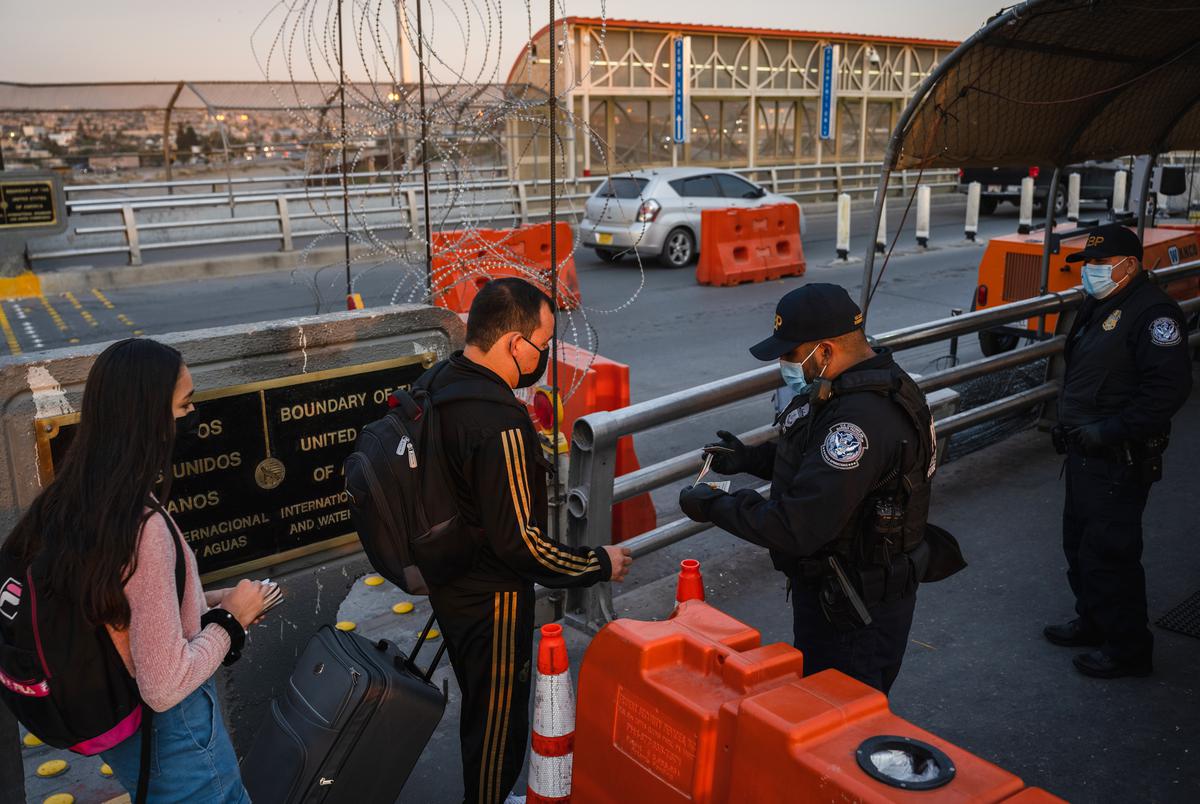 CBP agents check documents on the Paso Del Norte International Bridge in El Paso, Texas after the United States opened the border with Mexico on November 8, 2021. Credit: Justin Hamel for The Texas Tribune 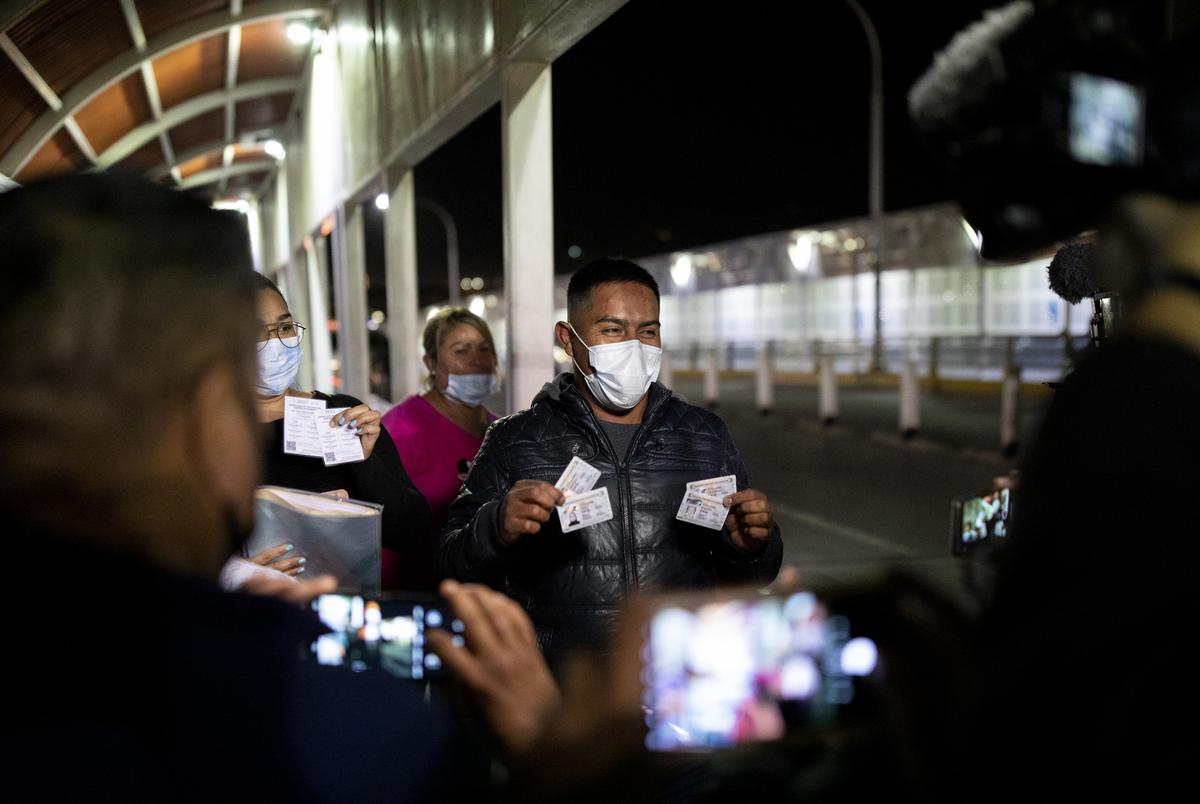 A man shows is Mexican issued vaccination card as he waits at the top of the Paso del Norte International Bridge to cross into the U.S. as a nonessential traveler on November 8, 2021, in Juarez, Mexico. Credit: Ivan Pierre Aguirre for The Texas Tribune

First: U.S. Customs and Border Protection agents check documents on the Paso Del Norte International Bridge connecting El Paso and Ciudad Juárez on Monday. Last: A man shows his Mexico-issued vaccination card as he waits at the bridge to cross into the U.S. shortly after restrictions ended at midnight. Credit: Justin Hamel and Ivan Pierre Aguirre for The Texas Tribune

U.S. Customs and Border Protection had warned there would be long waits for pedestrians and vehicles, but the Solis sisters and others said they waited less time on Monday than before the pandemic began.

After 19 months of closure, the U.S. Department of Homeland Security on Monday reopened ports of entry to vaccinated travelers from Mexico, a long-awaited event for business owners who depend on tourists and Mexican nationals who had not been able to visit family on the American side for more than a year and a half.

In March 2020, in an effort to fight the spread of COVID-19, the Trump administration closed the land borders to all but U.S. citizens, legal permanent residents and any other travelers considered essential, such as health care workers or students. Mexican nationals with tourist visas were barred from entering the U.S.

From Brownsville to El Paso, pedestrian crossings at ports of entry dropped drastically, according to the U.S. Department of Transportation statistics.

On Monday, some ports of entry that are operated 24 hours a day reopened at midnight. Others reopened at their previously scheduled hours of operation. 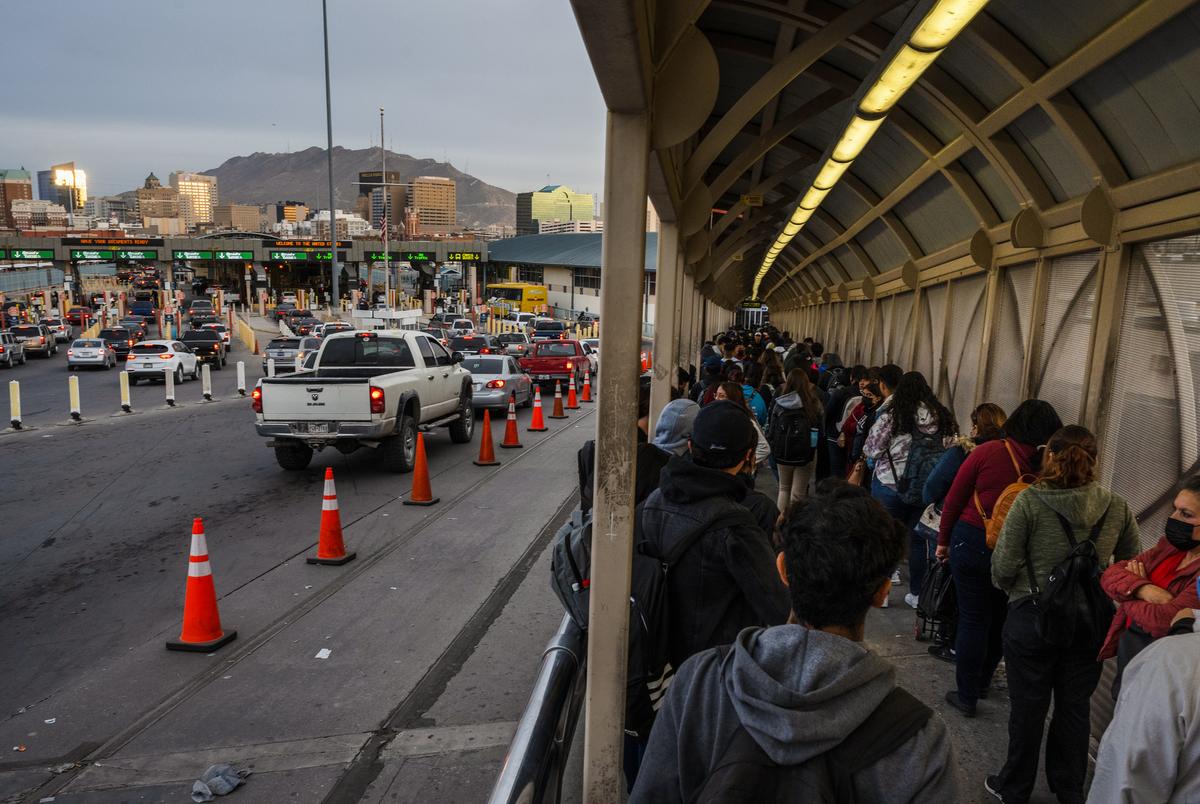 People wait in line on the Paso del Norte International Bridge to enter El Paso from Ciudad Juárez after the United States reopened its land border to vaccinated travelers on Monday. Credit: Justin Hamel for The Texas Tribune

Liliana Trujillo said she couldn’t wait for the border to reopen. After crossing the pedestrian bridge holding her 8-year-old son’s hand, Trujillo put her Mexican passport back in her purse. She was in a hurry, she said, because she was getting picked up by a relative on the American side who was going to take her to buy materials for her business.

She sells nail salon products in Juárez and used to buy her materials in El Paso. But when the border closed, she couldn’t buy enough to keep up with the demand of clients in Mexico.

She tried flying to Mexico City to buy what she needed but said it was too expensive. She said she was able to maintain the business because friends or relatives would buy the materials and take them across the bridge to her, but that wasn’t always consistent.

Gracia Prieto-Torres, a 64-year-old retired factory worker, was also happy to cross the bridge again. Before the restrictions, the widowed mother of two adult sons said she would come to El Paso from Juárez every three days or so to shop, eat and pass the time. With winter coming, she was shopping for jackets, sweaters and blankets.

That’s what El Paso business owners have been waiting for: Mexican tourists coming to spend their money. 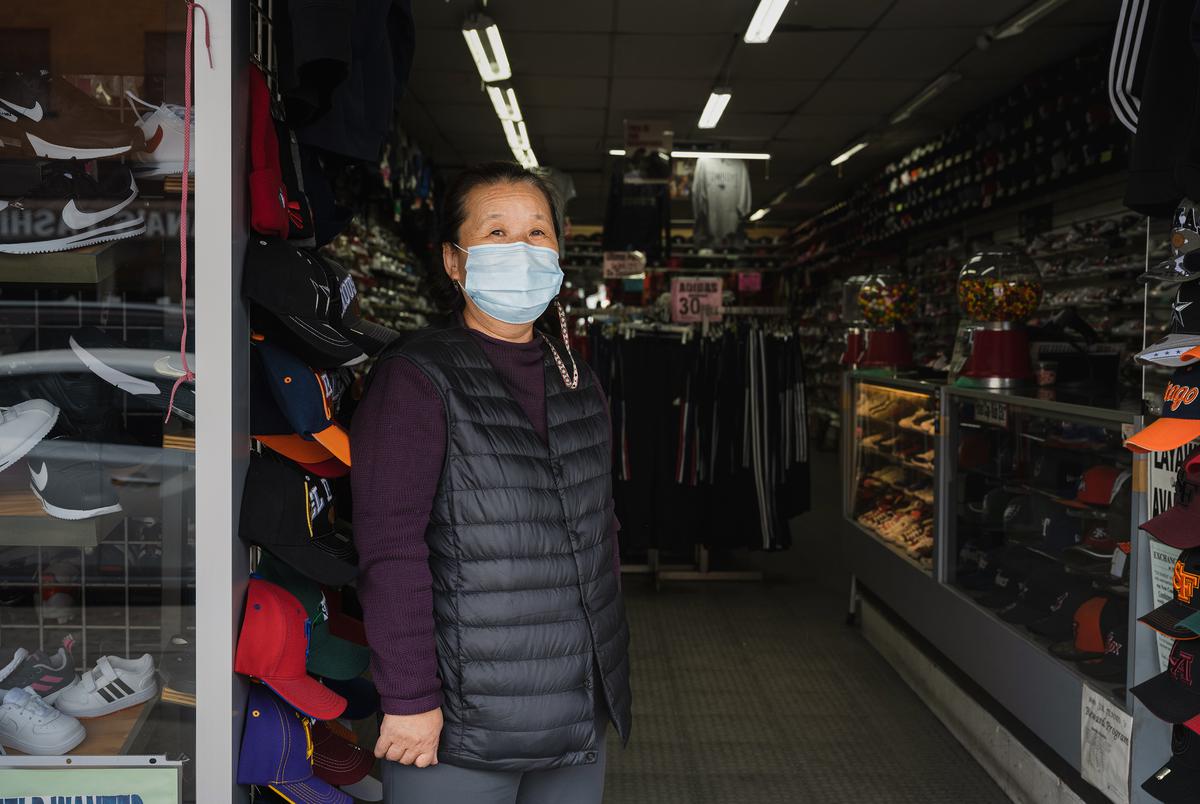 Kim Indock, who owns a shoe store near the bridge and was sweeping the front of the store Monday morning, said she lost a lot of customers because of the pandemic travel restrictions. While her store wasn’t bustling on Monday, she expects business to pick up more this weekend as Christmas shoppers start coming across.

Gisel Barraza, 23, who has worked at Sunrise Wigs for the past five years, said the past nearly two years have been slow because of COVID-19 restrictions and the store has reduced staffing from five employees at a time on the floor to two.

“We’re expecting for the store to be busy this weekend,” she said as she sat on a stool by the store’s cash register.

To enter the U.S., Mexican nationals with visas will need to prove they have received a COVID-19 vaccine approved by the U.S. Centers for Disease Control and Prevention. The proof, such as a vaccination card, can be in English or Spanish and in physical or electronic format. Travelers need to have the proof of vaccination with them at all times.

The requirements do not apply to children 17 years old or younger, Customs and Border Protection officials said.

Starting in January, non-U.S. citizens and nonpermanent residents traveling for essential purposes will also have to start showing proof of vaccination at land crossings to enter the U.S.

El Paso, which operates some of the busiest points of entry into the U.S., reported 3 million pedestrian crossings in 2020, a 60% drop compared with the year before. In Brownsville, pedestrian crossings plunged 53% from 2019 to 2020. Both cities saw vehicle crossings drop by roughly half over the same period. 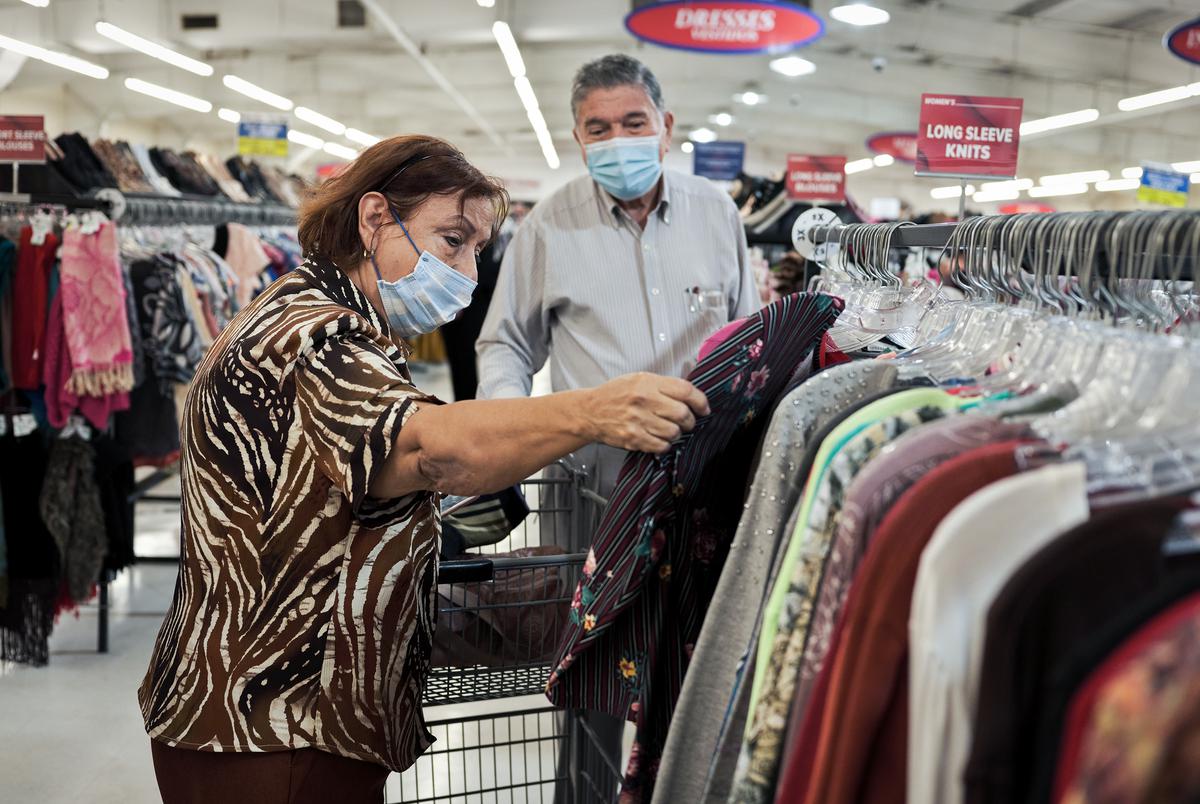 Visitors from Matamoros take advantage of the border reopening to visit their favorite stores in Brownsville after the United States reopened its land border to vaccinated travelers on Nov. 8, 2021. Credit: Brenda Bazán for The Texas Tribune. 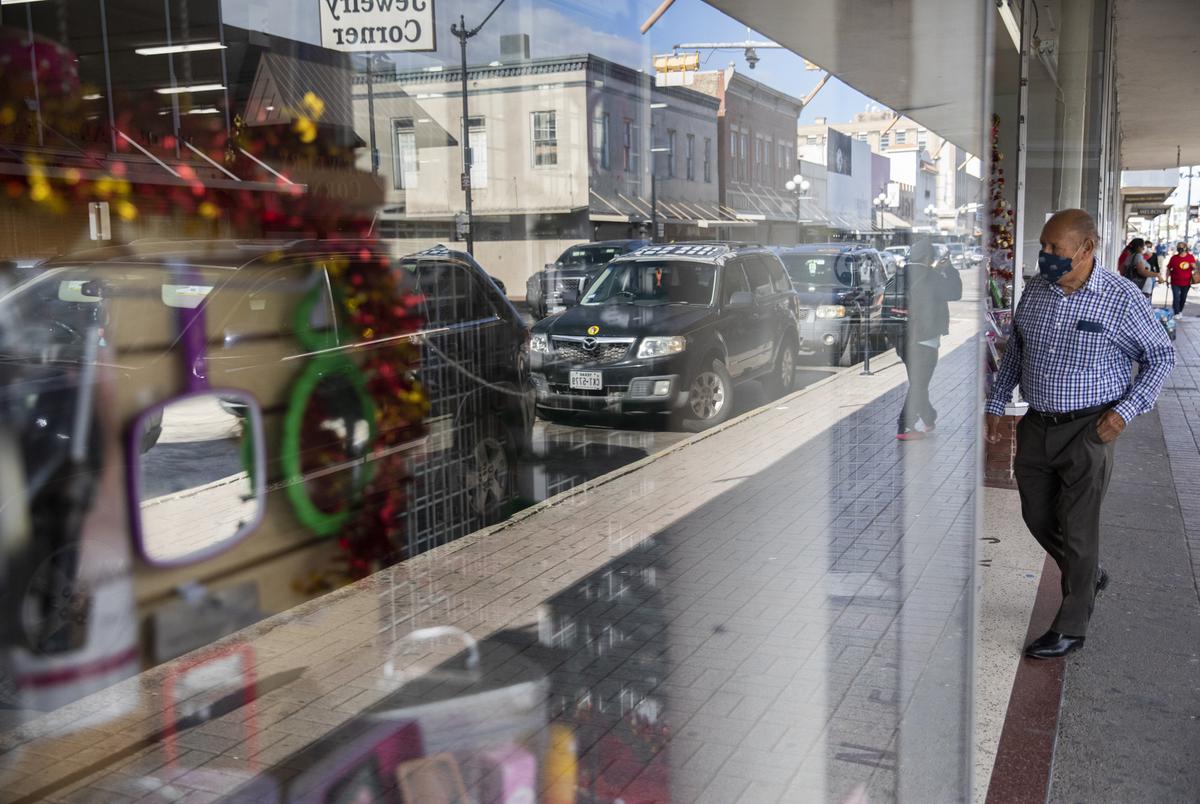 Pedestrians walk through downtown Brownsville on Monday after the U.S. Department of Homeland Security reopened ports of entry to vaccinated travelers from Mexico after 19 months of closure to everyone but "essential" visitors. Credit: Eddie Gaspar/The Texas Tribune
Ad

First: Travelers from Matamoros take advantage of the border reopening to visit Brownsville stores on Monday after the U.S. Department of Homeland Security reopened ports of entry to vaccinated travelers from Mexico. Last: Pedestrians walk through downtown Brownsville on Monday. Credit: Brenda Bazán and Eddie Gaspar for The Texas Tribune.

Border Patrol officials said they expect longer lines at the border as the holidays approach and asked potential travelers to have their documentation ready to ease the process.

“We do anticipate more travelers, especially as we head into the holiday season. Everybody should expect longer wait times. That’s the reality of what we’re going to see,” Ray Provencio, acting El Paso port director, said Friday in a statement. “By being prepared to the point where every traveler can save just a few seconds in the process will add up into real-time savings for all travelers at our local border crossings.”

Many who crossed the border on Monday said they waited between 15 minutes to half an hour, compared to significantly longer waits pre-pandemic.

In Laredo, U.S. Rep. Henry Cuellar, Laredo Mayor Peter Saenz and some Mexican elected officials held an event at the international bridge connecting the city with Nuevo Laredo on Monday to welcome Mexican shoppers and tourists back.

“On a personal note, I feel an immense amount of joy for those who will finally reunite with family and friends after 19 months. This is a true celebration especially with the holidays right around the corner,” said Saenz.