‘It just keeps on happening’: Texas parents fight legislation targeting their trans children for the fourth time this year

Karen Krajcer and Linzy Foster are two friends familiar with the hallways of the Texas Capitol.

During this year’s regular legislative session and two subsequent special sessions that followed, the two mothers have shown up with a handful of other parents to advocate for their children who have been caught in the crosshairs of a slew of bills that target young transgender Texans.

Now, with the Legislature’s third special session underway, the two friends are enduring another round of visits and demonstrations as legislators again debate a top Republican legislative priority: restricting transgender youth from playing on sports teams that are consistent with their gender identity.

“It just keeps on happening, it’s ridiculous,” Krajcer, a mother to a 9-year-old, said about the amount of bills filed during sessions that have targeted LGBTQ Texans. “This is the fourth round this year. … Why are we still having to do this?”

So far, the Texas Senate has passed a bill limiting transgender participation in youth sports four separate times. The first three times, the bills stalled out and failed. Last week, Senate Bill 3, authored by Lubbock Republican state Sen. Charles Perry, was approved by a 19-12 Senate vote, with all but one Democrat voting no.

The bill would require student athletes at K-12 public schools to play on sports teams that correspond with the assigned sex listed on their birth certificate as it was issued at or near the time of their birth. The University Interscholastic League, which governs school athletics in Texas, already uses students’ birth certificates to confirm their gender, and also accepts modified birth certificates a student may have had changed to align with their gender identity. SB3 would end that acceptance.

Although the sports bill and other bills targeting transgender youth, such as those that would limit gender-affirming care, have not become law in Texas, LGBTQ advocates and the transgender community have expressed that the simple possibility has already exacted a mental toll on transgender youth. And with a third special session now underway, parents of transgender children have only seen the frustration — and exhaustion — grow among their families. 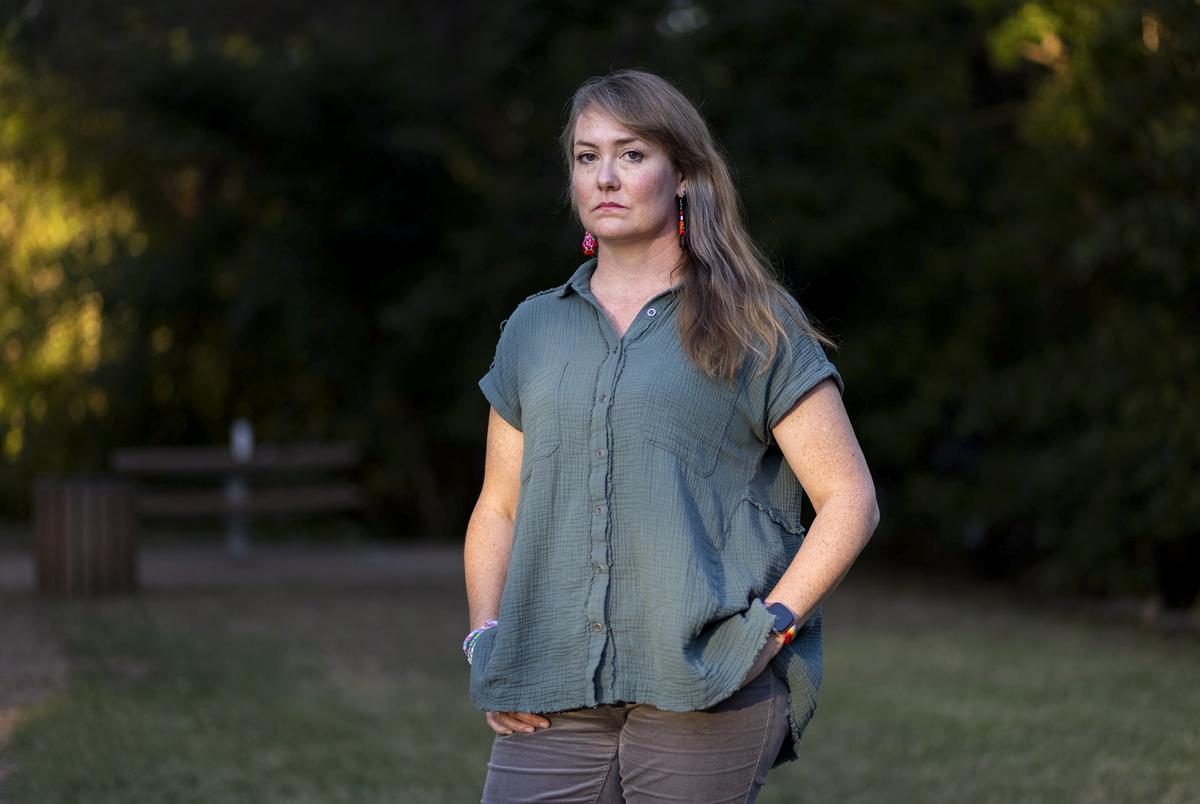 “I mean my health has been affected by this. I have lost sleep, I'm losing my hair, I'm having to take different medications,” said Foster, 42, who lives in Austin and is a mother to a 7-year-old transgender girl. “This is chronic stress that we're dealing with, because we get these little breathers in between sessions where we think, ‘OK, are we done? Are we good? At least maybe we can take a break, and then maybe we'll think about strategy for next session, because we know it's coming,’ but we don't even get a break yet.”

In August, Foster waited almost 20 hours at a Capitol hearing to plead with the House Public Education Committee not to “support legislation based on speculation.”

“What is real is the direct harm this bill is causing right now on trans youth and their families,” Foster told committee members.

Just last week, Foster and Krajcer joined a demonstration held by Equality Texas outside the Senate chamber, protesting a committee hearing where legislators voted to advance the transgender sports bill to the Senate floor. Foster and Krajcer, along with a handful of other demonstrators, stood on steps outside the chamber repeatedly chanting phrases like “enough is enough” and “protect trans kids” as state police officers stood off to the side monitoring their noise levels.

Although both their children are too young to join UIL sports teams, Foster and Krajcer have said they have shown interest in sports such as soccer and basketball. However, if SB3 passes, they said it's likely even the possibility of UIL competition won’t be an option.

“[My daughter] is eager, but I keep thinking about how horrible that's gonna be to tell her [one] day that sports might not be an option for her, just because of who she was born as, the fact that she's different,” Foster said.

Krajcer, a native Houstonian, said she’s had thoughts about moving if legislation that would target her transgender daughter were to become law in Texas. One of the darkest moments out of this series of sessions for her family was when legislators in the Senate passed a measure that would restrict gender-affirming care for children and classify providing such care as child abuse. 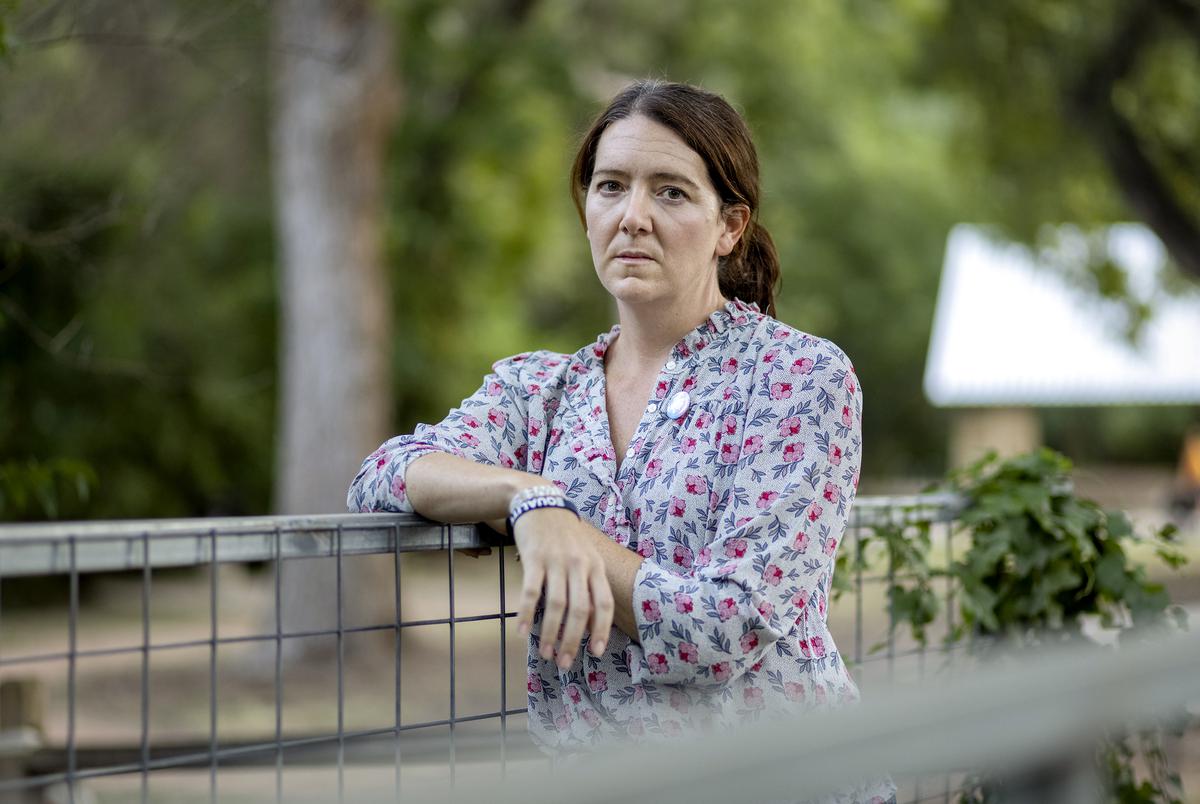 “It just keeps on happening, it’s ridiculous,” Karen Krajcer, a mother to a 9-year-old, said about the amount of bills filed during sessions that have targeted LGBTQ Texans. Credit: Michael Gonzalez/The Texas Tribune

She answered that there were many people in the Capitol fighting to keep that from happening.

“And she went, ‘But if we move it’s going to be my fault.’ And that’s a lot for a child to have to go through,” Krajcer said.

The Trevor Project, a suicide prevention and crisis intervention organization for young LGBTQ people, said crisis contacts from LGBTQ Texans seeking support has increased more than 150% from Jan. 1 through Aug. 30, compared to that same time period last year. According to a research brief the organization released this month, a majority of LGBTQ young people, almost 70%, do not actively participate in sports, “with many citing fear of bullying and discrimination as a key factor for not participating.”

The organization said in a statement that while the amount of crisis contacts it has received this year from Texans can’t be attributed to one specific factor or piece of legislation, “transgender and nonbinary youth in Texas have directly stated that they are feeling stressed, using self-harm, and considering suicide due to anti-LGBTQ laws being debated in their state.”

Perry, as well as supporters of SB3, has argued that the legislation preserves women’s sports and the intent of Title IX, which requires schools who receive federal funds to provide equal opportunities for students on the basis of sex, including for activities such as sports.

“It’s about safety and equity in peer groups,” Perry said. “... It’s a bicameral process, and we’ll see where [the bill] goes in the House. I suspect it goes through.”

However, opponents see the bill’s language as divisive and dismissive of transgender children and their identities, alienating them when they may already endure bullying and mental health issues.

“It's meat,” Foster said of Perry’s arguments. “It's to get people [to the Capitol], it's to get people to testify, to drum up the fear that transgender women — which are women by the way — are going to take over women’s sports.” 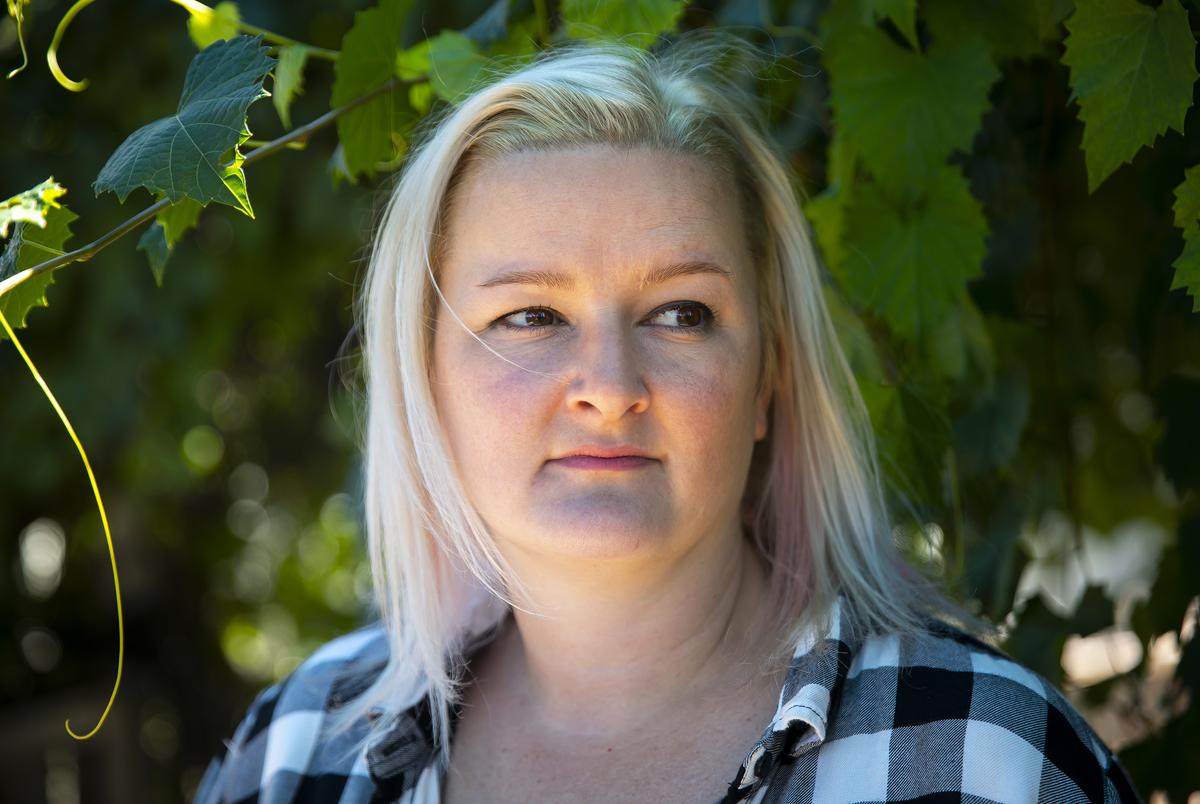 Rebekah Bryant at her daughter’s school in Houston on Sept. 23, 2021. Credit: Annie Mulligan for The Texas Tribune

Rebekah Bryant, who lives in Houston, said she’s traveled to Austin at least six times since May this year, pleading with legislators to not pass bills targeting transgender youth like her daughter Sunny, an 8-year-old transgender girl who has enjoyed playing sports such as baseball and gymnastics.

The consecutive sessions have put a financial burden on her family, said Bryant, 37. Traveling to Austin often requires her to take off work and book a hotel because committee meetings can often last the whole day and well into the night. Bryant said before this year, Sunny was not really aware there were people in the world who did not accept her, and Bryant and her husband never really had to explain publicly that Sunny is transgender.

“We had to show her the dark side of what her future is, and I think that’s been really hard for my husband and me,” Bryant said. “We know that she has potential for depression, and we know there's all these mental health issues that come along with society not accepting her. … She didn't know that she was ever going to have any resistance in life and now she knows, and I think it’s taken a toll on her and her mental health.”

Bryant has testified before legislative committees at least twice, with Sunny testifying by herself twice.

“Let me play, let me skin my knees diving into home [plate], cheer for my teammates when they score and feel the freedom of running as fast as I can,” Sunny said before the House Public Education committee last month.

While at committee hearings, Sunny usually spends time playing with another kid or on her iPad, said Bryant, who prefers to make sure Sunny isn’t exposed to some of the factually incorrect statements that are made during public testimony.

Bryant said she hopes by the time Sunny becomes of age to participate in UIL sports that SB3 or similar bills won’t have become law. If they do, Sunny will likely have to stay in private school.

“I know that we're going to find a [public] school that's going to support us, I just don't know if they'll legally be able to,” Bryant said.

Krajcer said right now she and other parents have been shifting their focus to the House and how the bill will fare in committee.

Lt. Gov. Dan Patrick said in a recent statement that he will continue pushing for the bill’s full passage, noting that the Senate has passed similar legislation four times that has languished in the House.

“We cannot allow our women to be pushed out of athletic scholarships and out of sporting excellence,” Patrick said. “This is the fourth time we have passed this bill out of the Senate this year, and we will continue passing this bill until it finally becomes law in Texas.”

As much as she wishes she didn’t have to see such a bill come up again, Bryant said she will stay engaged, anticipating that one day she and Sunny won’t have to visit the Capitol under such intense circumstances.

“I’m hoping we can turn this into something positive, because her first visit to the Capitol should have been a school field trip, not defending her humanity,” Bryant said.

Disclosure: Equality Texas has been a financial supporter of The Texas Tribune, a nonprofit, nonpartisan news organization that is funded in part by donations from members, foundations and corporate sponsors. Financial supporters play no role in the Tribune's journalism. Find a complete list of them here.

The 2021 Texas Tribune Festival, the weeklong celebration of politics and policy featuring big names and bold ideas, wrapped on Sept. 25, but there’s still time to tune in. Explore dozens of free, on-demand events before midnight Thursday, Sept. 30, at tribfest.org.