‘They did everything together’: Ambushed Pct. 4 deputies described as ‘brothers’ who shared unbreakable bond

(GMG) – You no doubt have heard about the upcoming solar eclipse on Aug. 21, and you probably have questions.

Most importantly, you want to know what we’ll be able to see, and exactly when. This article has everything you need to know, so feel free to forward it to your family and friends.

The first thing is, unlike lunar eclipses (and I’ll explain the difference below), you cannot look at a solar eclipse without a very special solar filter on your telescope, or special eclipse-viewing glasses.

On a typical summer day, can you look directly at the sun? Of course not. The sun is so bright that you will suffer permanent eye damage if you look at it. In fact, even if the sun is 95 percent blocked by the moon, it’s still way too bright to look at with the naked eye. And trust me: Over the years, I have heard the occasional story about people who tried looking at a partial solar eclipse without eclipse glasses, and who became blind for the rest of their lives. So PLEASE remember this.

How a solar eclipse happens

The most remarkable thing about the moon is that its size and distance from the earth are such that it’s approximately the same size as the sun in our sky!  When the moon passes directly in front of the sun, we say that it’s “eclipsing” the sun, or covering it. When the moon is a little farther away in its orbit, it’s a little bit smaller, and isn’t big enough to completely cover the sun. That’s called an annual solar eclipse, because an annulus (or ring) is seen around the edges of the moon (and by the way, this ring is still way too bright to look at without eye protection).

Here’s a great photo from NASA of an annular eclipse: 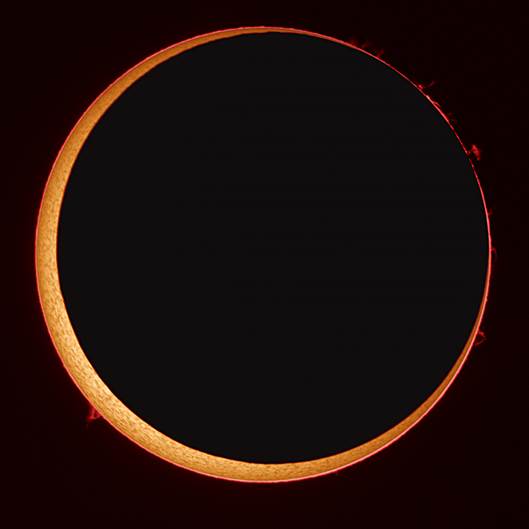 It’s much more special when the moon is closer in its orbit. When the closer moon passes directly in front of the sun, it’s called a total solar eclipse because it completely covers the solar disk. In this instance, as the moon passes between Earth and the sun, it casts a shadow that moves across Earth. Near the center of that shadow, people all of a sudden see twilight develop -- birds suddenly get confused and stop flying because they think it’s night and the temperature drops. And then, it becomes dark (not middle-of-the-night dark, but quite dark).

At this moment, it is OK to look at the sun without any special filters or glasses, because the moon is blocking it. The only thing you see is the sun's corona (or atmosphere) around the edges.

Here’s a great shot from NASA of a total solar eclipse: 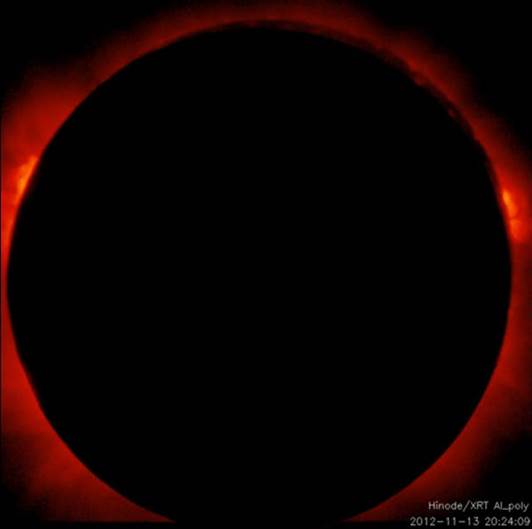 Here is a series of visualizations from NASA showing the moon orbiting Earth during the month leading up to the Aug. 21 eclipse. In these images, the sun is off the screen to the left, and the purple “beam” is the moon’s shadow. Notice the date at the bottom: I’ve spaced these out one week apart, and you can see in the last image how everything is perfectly aligned so that the moon’s shadow hits Earth. 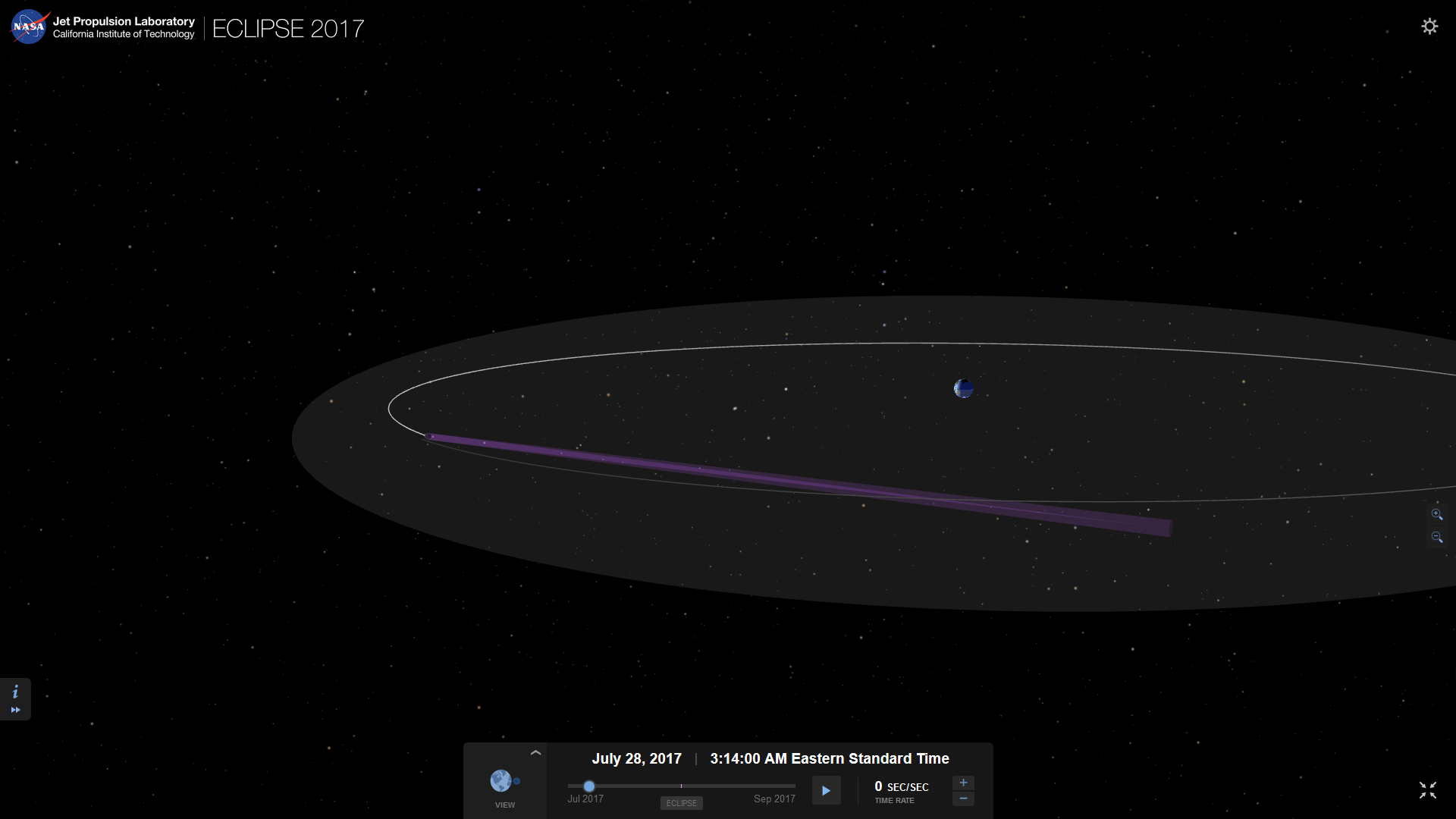 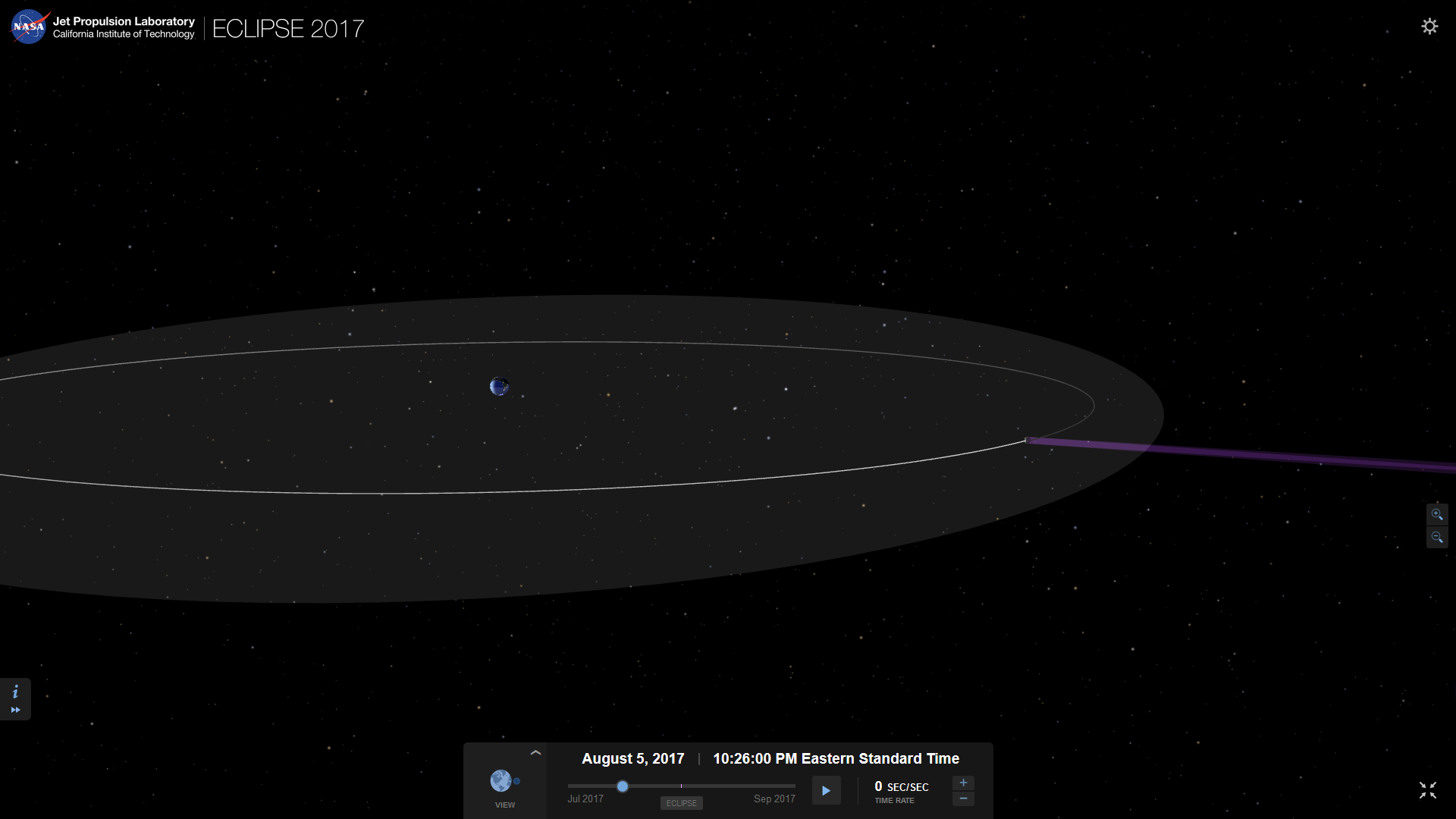 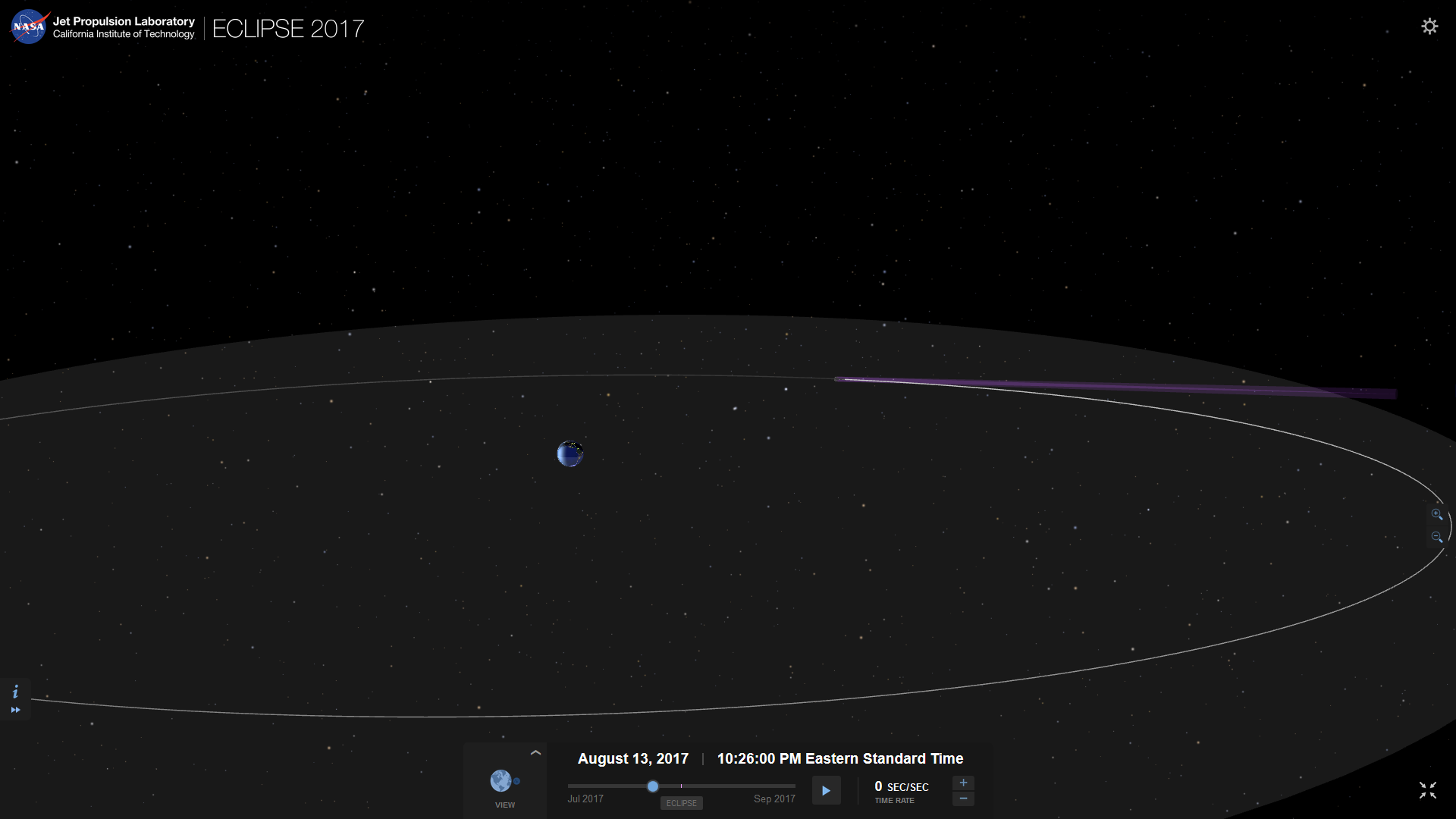 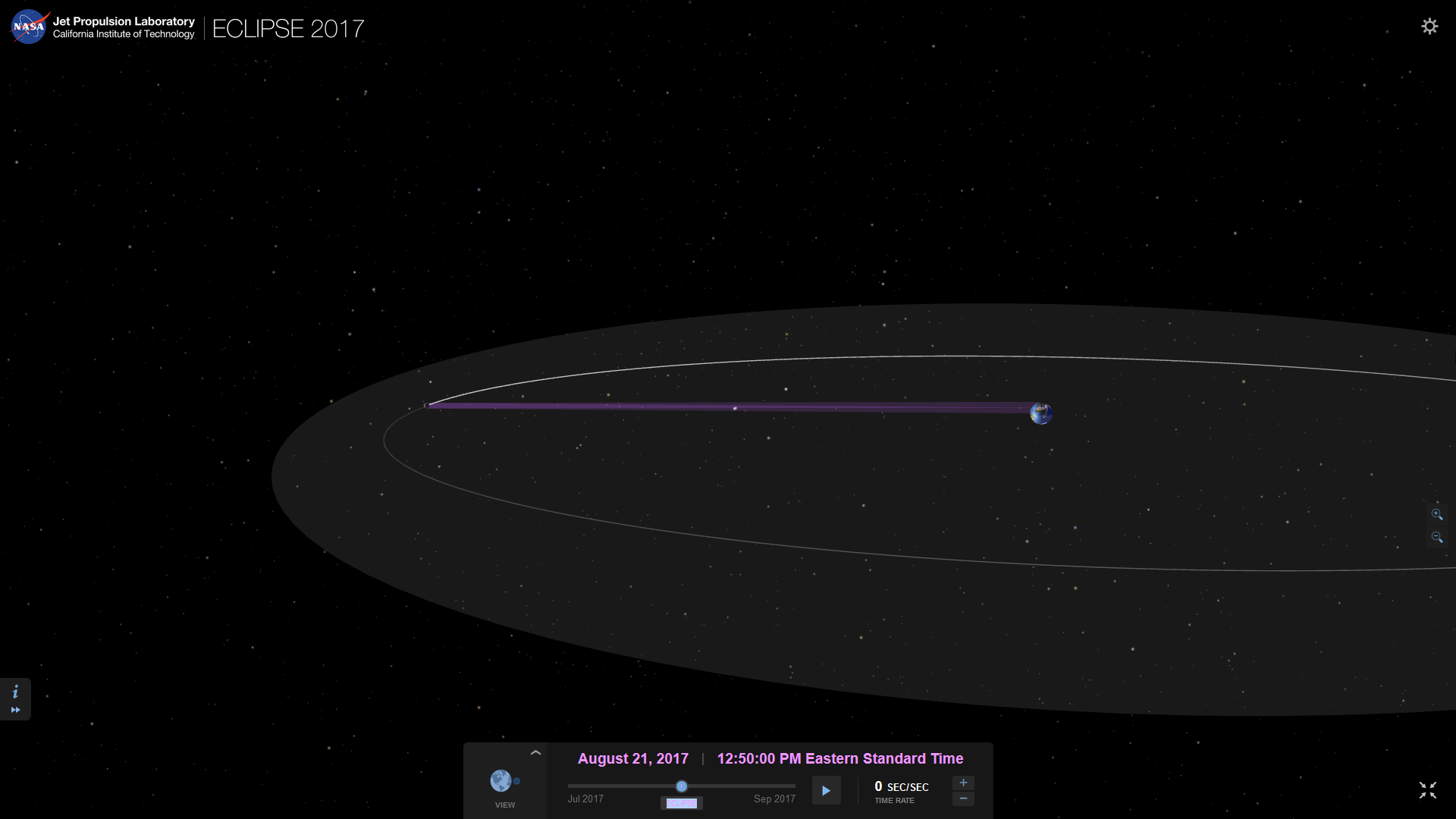 This next series of NASA images shows the view from “behind” the moon looking at Earth as it crosses directly between the sun and Earth.

The little inset in the lower right shows what people will see in Detroit, for example, at that exact corresponding time you see at the bottom of the image -- and notice that the times on the images are Eastern Standard Time … you’ll need to add an hour to get to Daylight Saving Time. And by the way, if you flip the Earth and moon, so that Earth is passing between the moon and the sun, then we see Earth’s shadow go across the moon … that’s called a lunar eclipse (and those are safe to look at)! 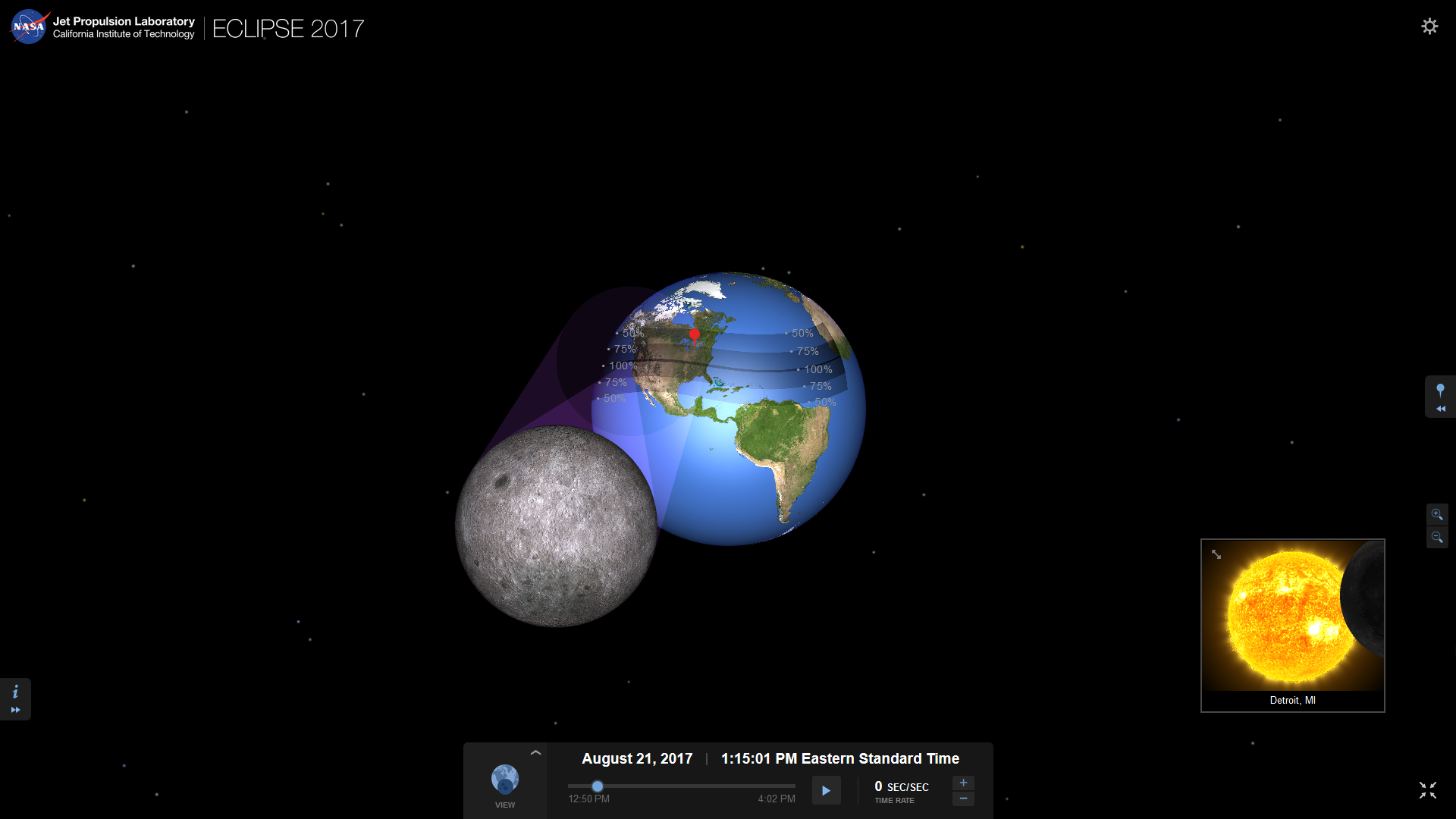 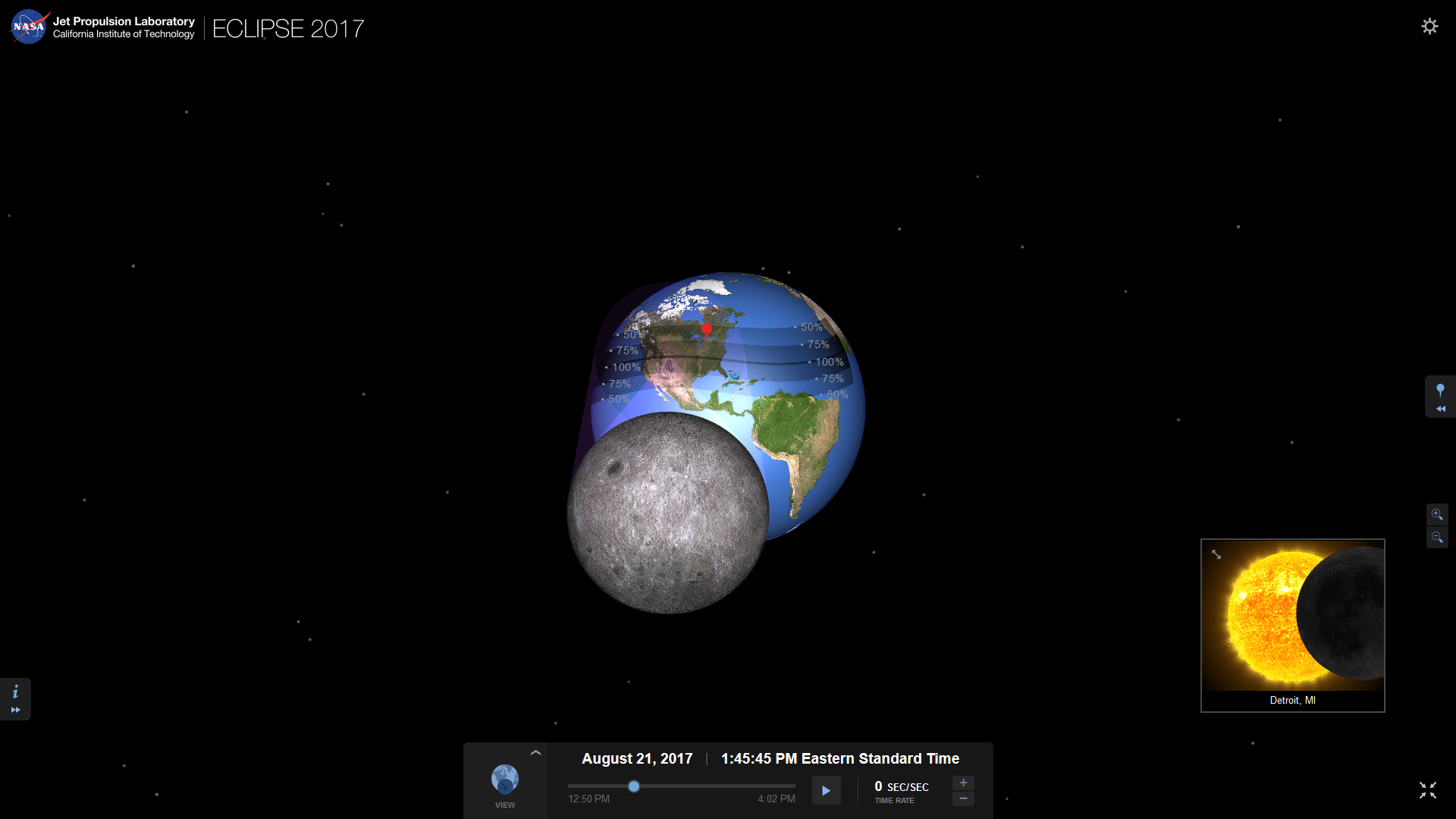 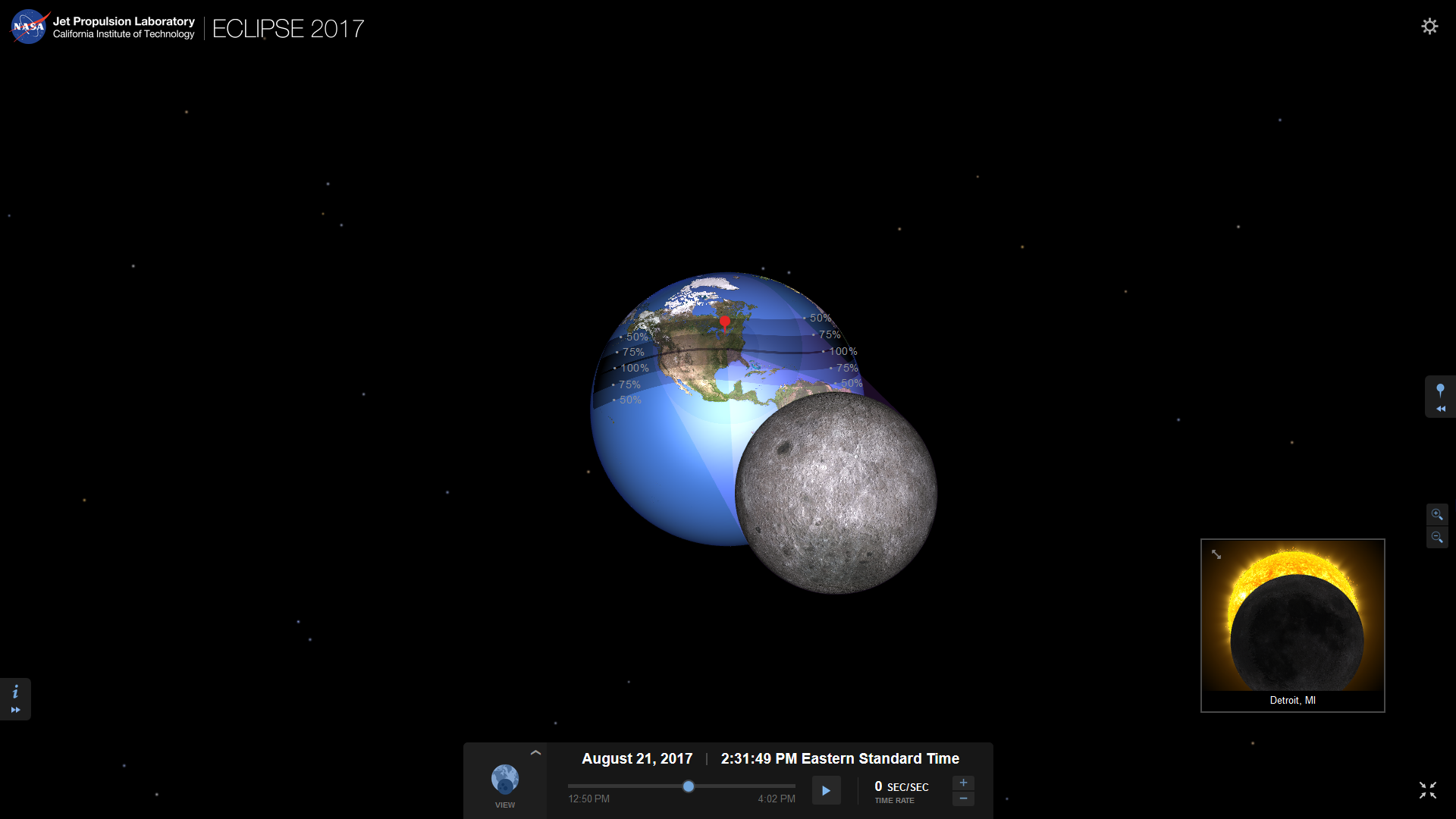 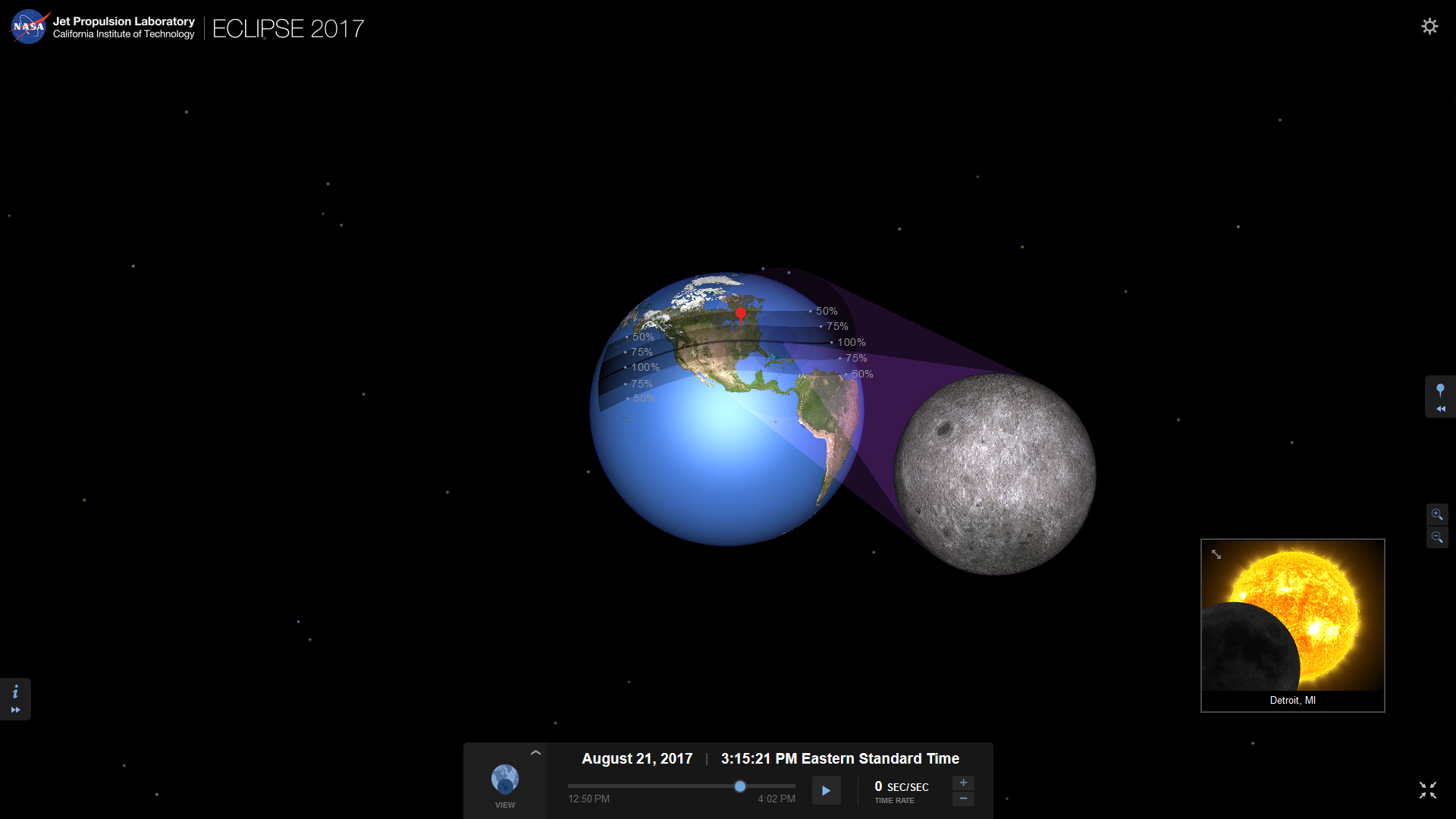 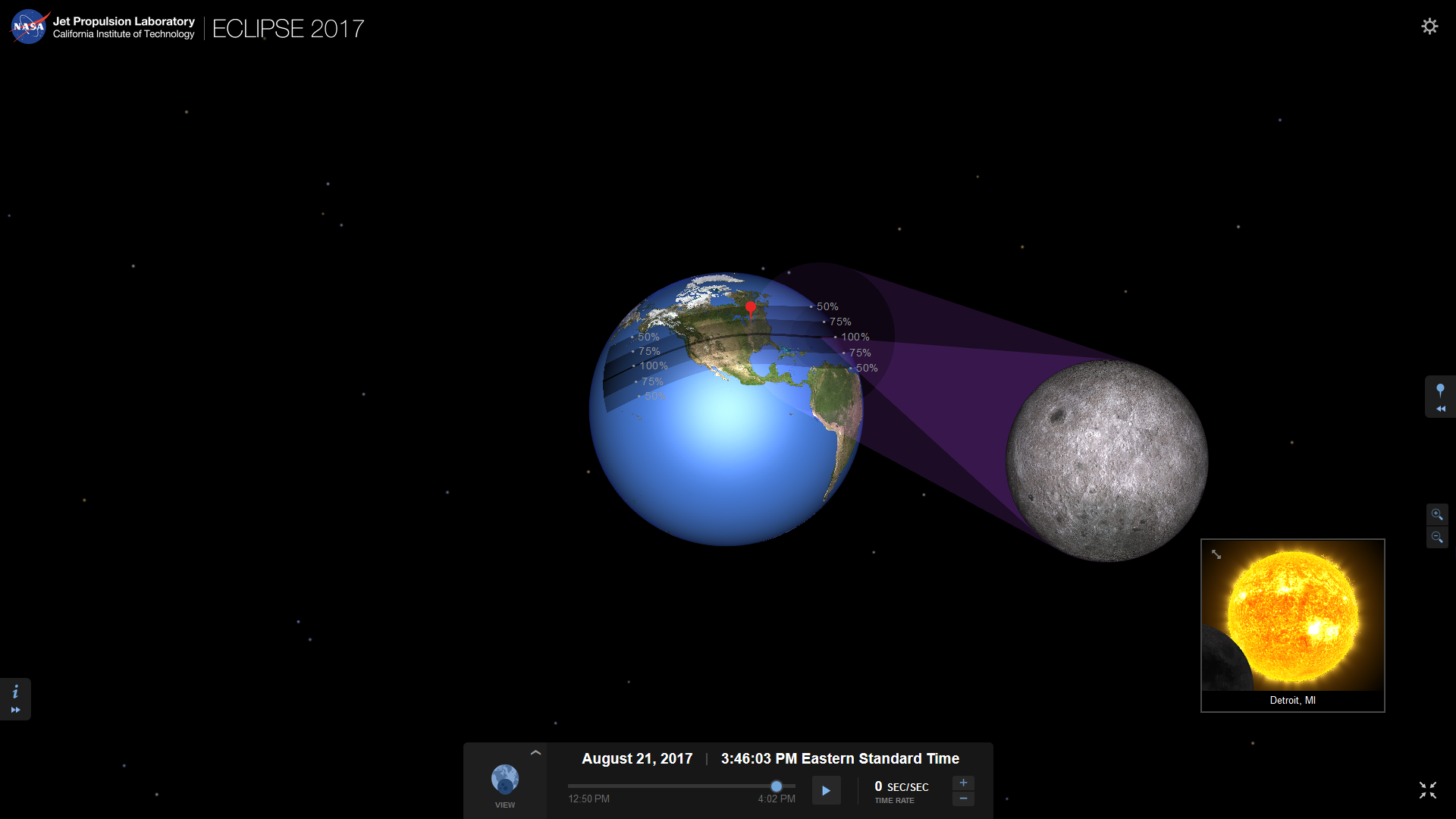 And finally, here’s the eclipse’s path across the United States from start to finish. As you can see, the eclipse starts in Oregon and splits the nation in half diagonally before moving off the South Carolina coast into the Atlantic. The darker-shaded strip in the middle of the country is the path of totality -- these are the areas that will see the total solar eclipse. 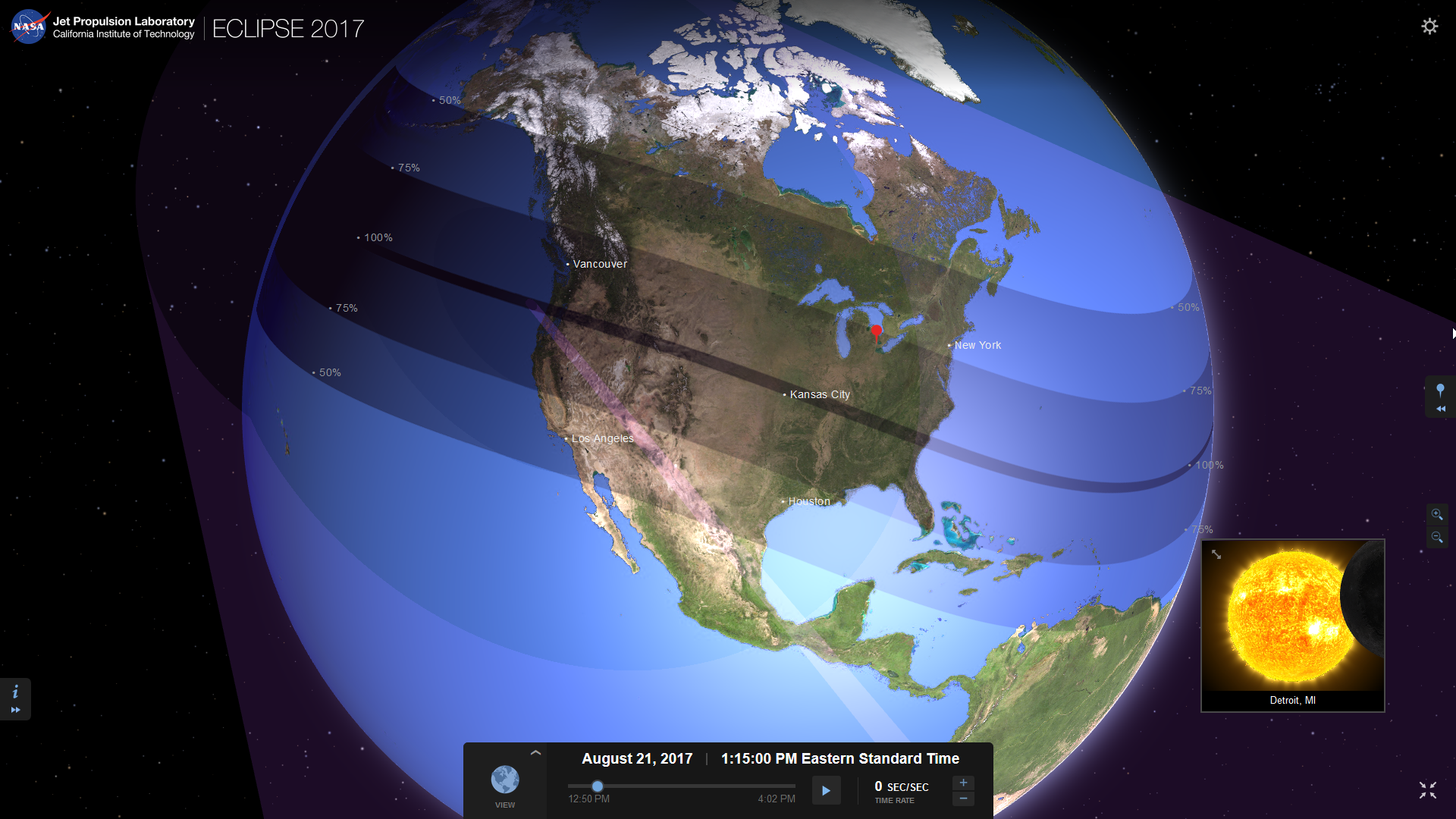 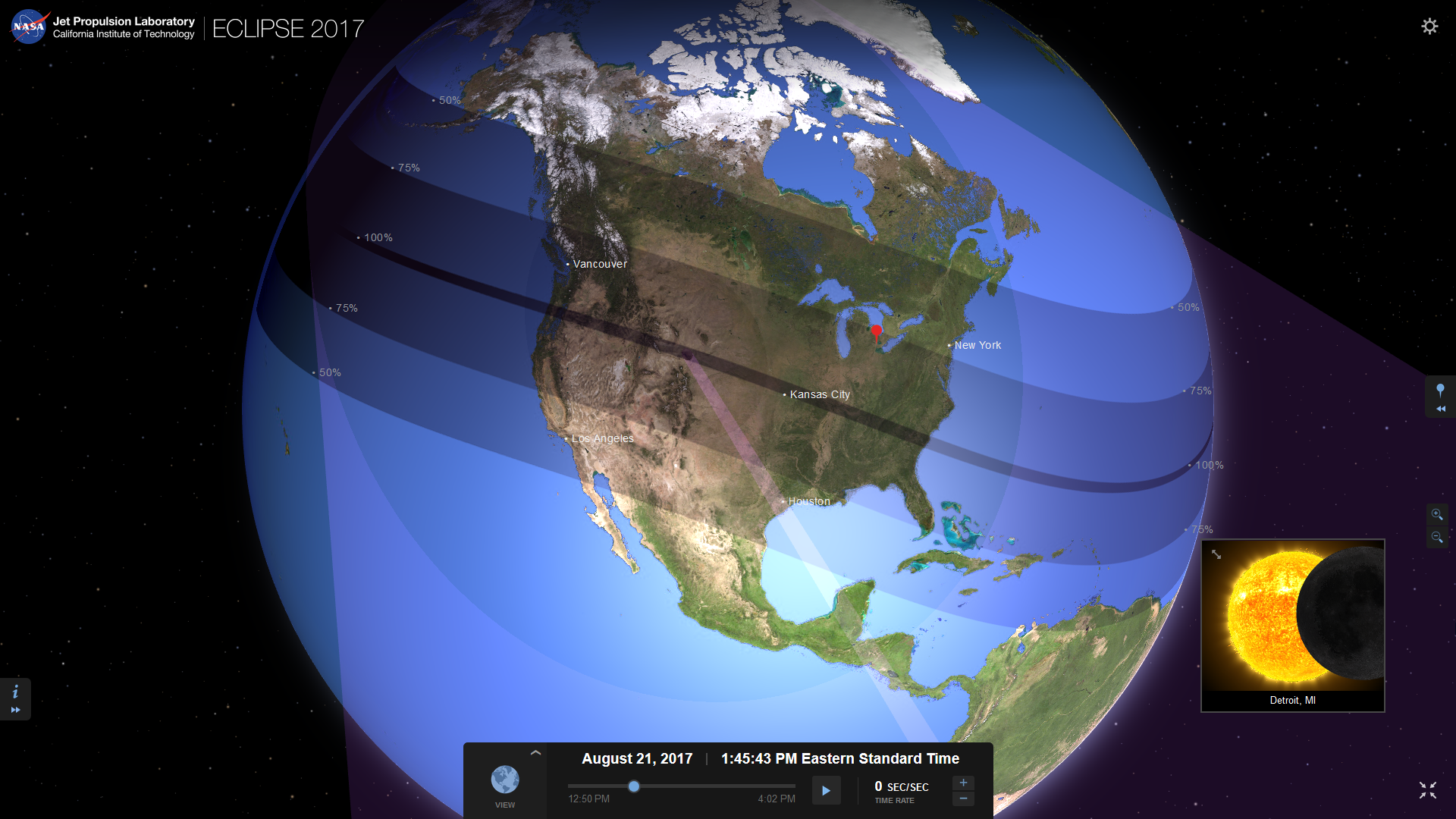 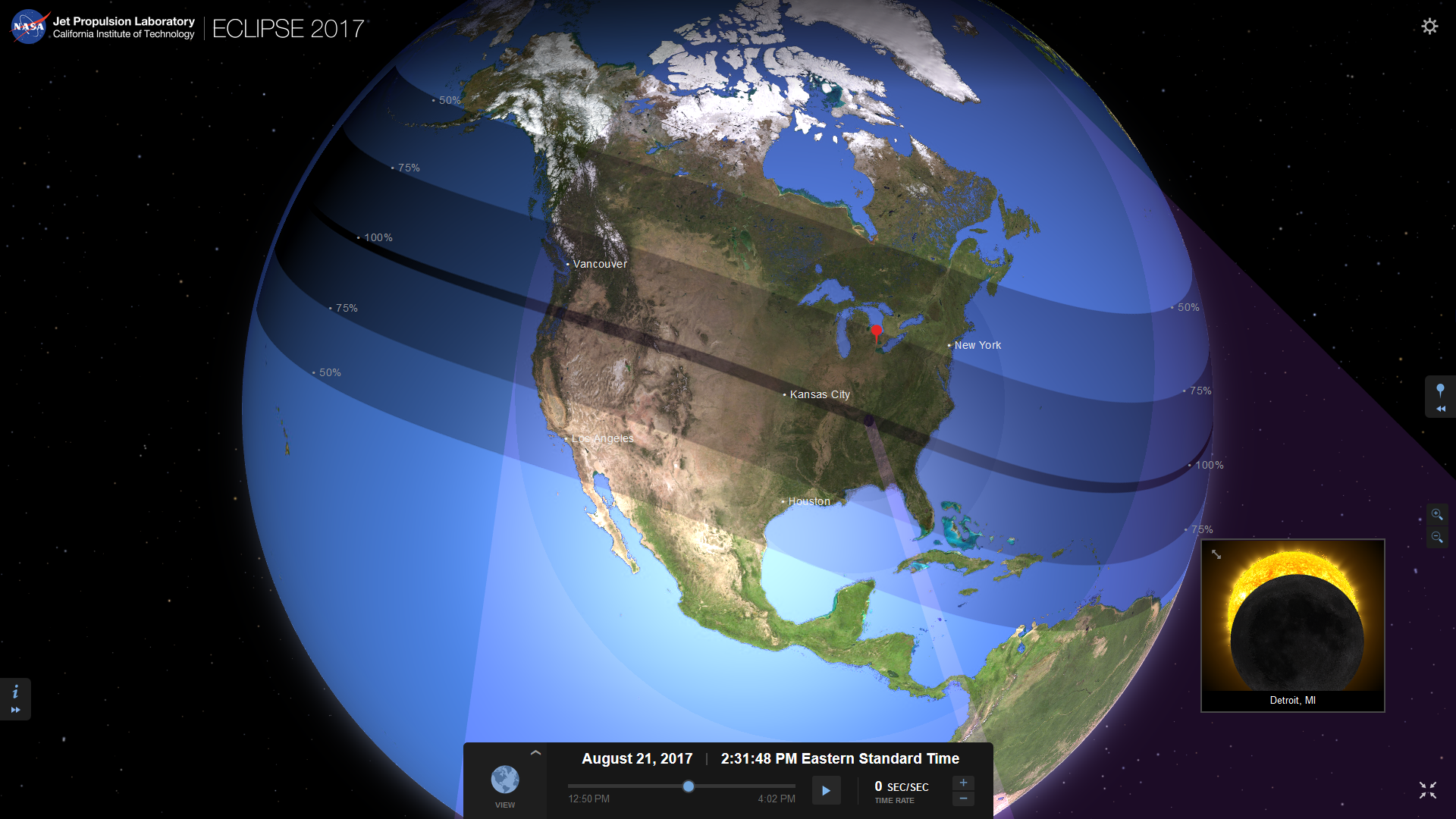 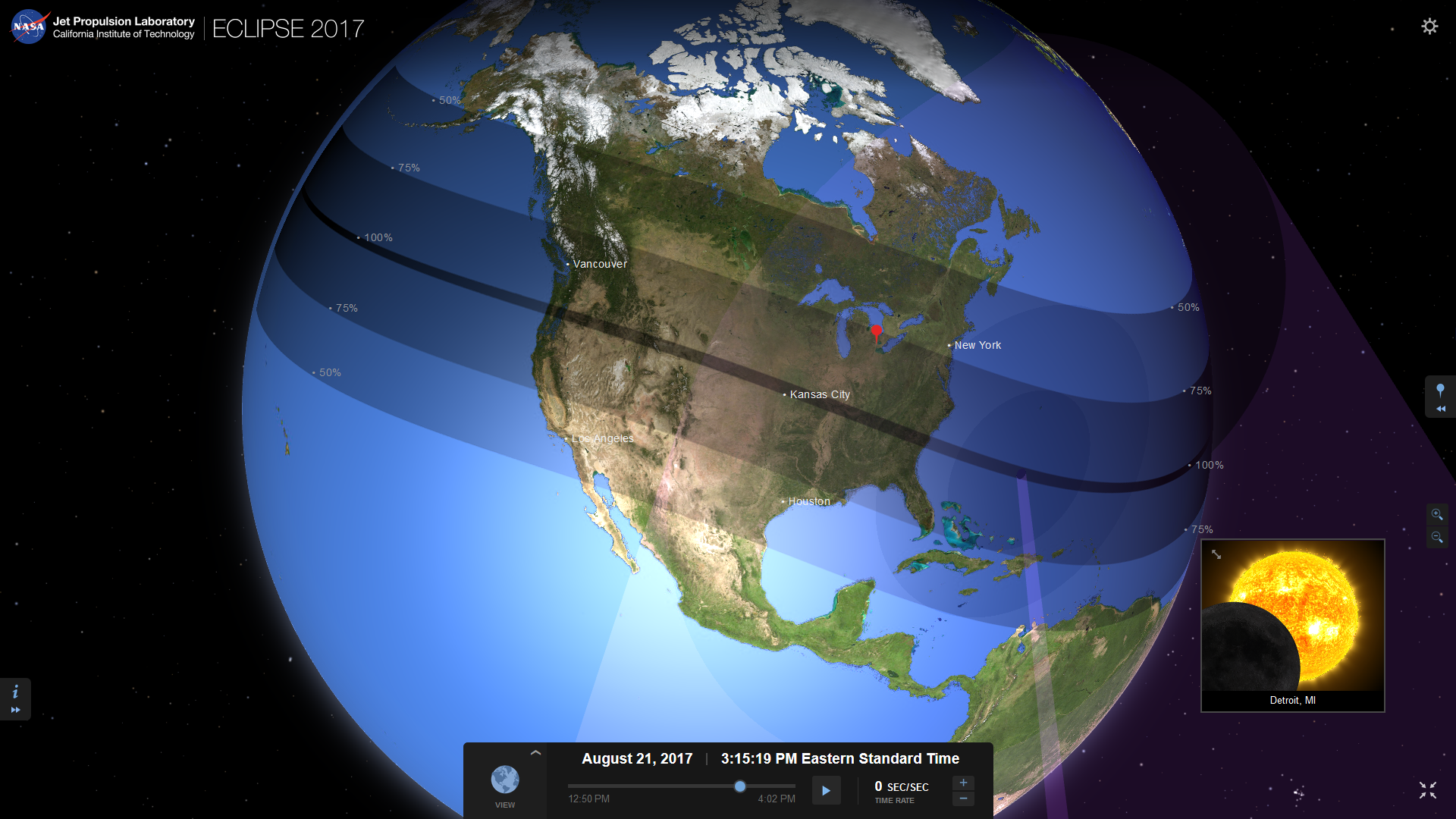 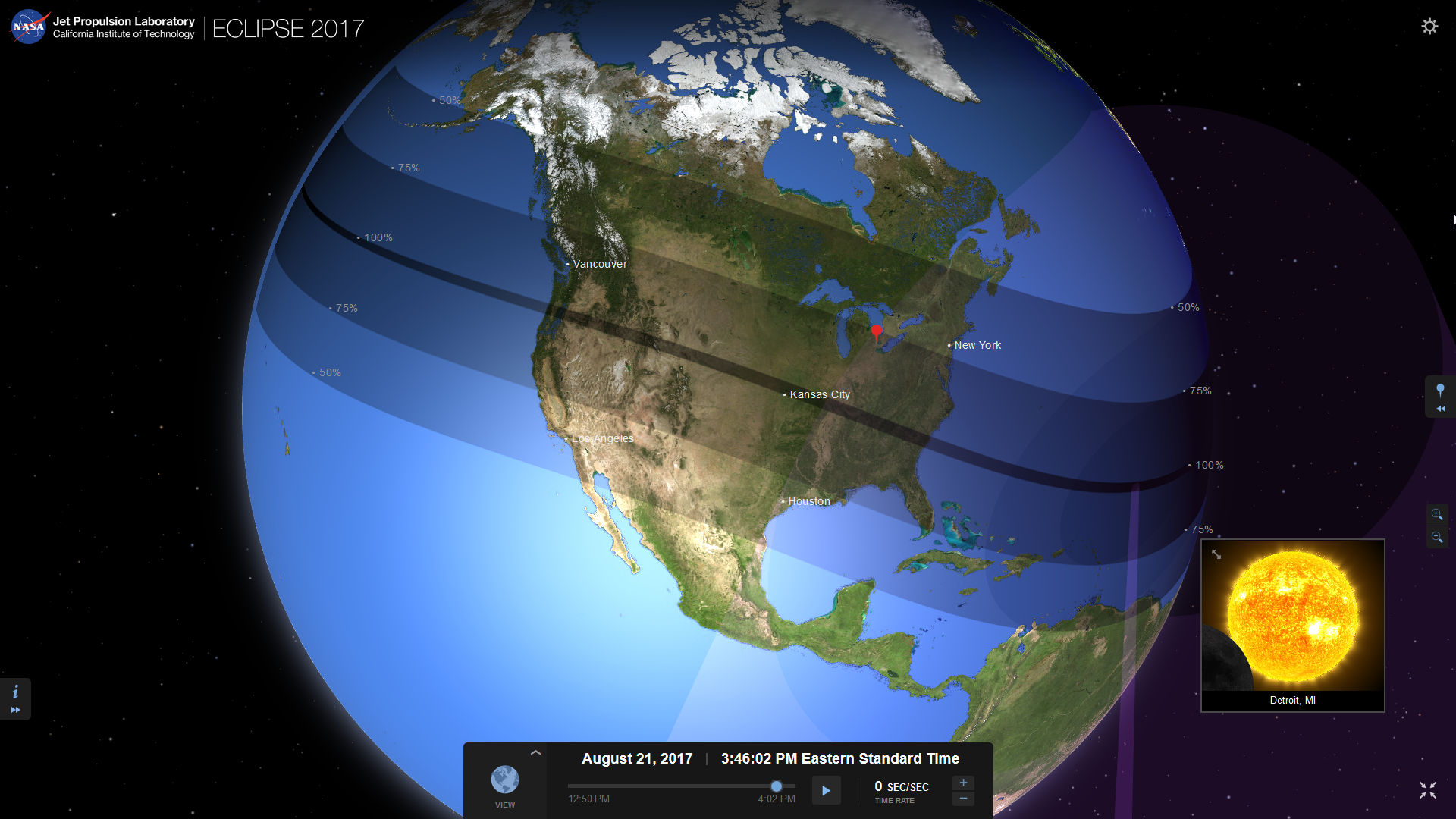 The images above are snapshots from an awesome NASA website, which you can see here. It’s a really cool, interactive site, and you can select anywhere in the nation to see how much of the eclipse they’ll experience there.

Even if you didn’t know a thing about the eclipse, you probably wouldn’t know that anything was going on during the afternoon of Aug. 21 because we are not in the path of totality.

However, most of you will know about it, and you’ll want to see something -- IF Mother Nature cooperates, that is. After all, to see the eclipse, we need clear or mostly clear skies; certainly no worse than partly cloudy.

The old standby for eye protection, which I’ve used in the past, can be made simply by using just two pieces of thin cardboard, such as the type that comes with a new shirt you buy. You’ll want to punch a perfectly circular small hole in one piece of the cardboard, smaller than a pencil eraser in diameter. The key is to make sure the hole is circular and clean -- no frayed edges. Then, stand with the sun at your BACK, and hold the cardboard with the hole up so that the sun shines through the hole onto the second piece of cardboard. Adjust the spacing between the two cardboards to focus the image, and you’ll see the sun projected onto the second image! As the moon passes in front of the sun, you’ll begin seeing a little “bite” taken out of the sun, all the way to the point where you’ll see only a crescent of the sun during the point of maximum eclipse. I suppose you can use something thicker, like a piece of plywood, but you’d need to drill those holes, and get them perfectly round.

A LOT of Americans are going to be driving to the path of totality to try and see the eclipse. I’m already hearing about concerns regarding not only traffic congestion on roads headed toward those areas, but also about people not aware of the eclipse driving on freeways in those areas suddenly wondering what’s going on when it starts getting dark and then getting into accidents as they take their attention off the road. And forget about trying to get a hotel room -- most every hotel in the path has been sold out for months, and some for years.

When’s the next total solar eclipse opportunity for the U.S.?

A good one will come on April 8, 2024, and that one will take a path from southwest Texas through Cleveland -- the north edge of the path of totality may just make it to Toledo!  As you can see, these don’t happen too frequently, which is why this year’s eclipse is getting so much attention. Here are two NASA maps showing the paths of all total solar and annular eclipses from 2000 through the year 2040: 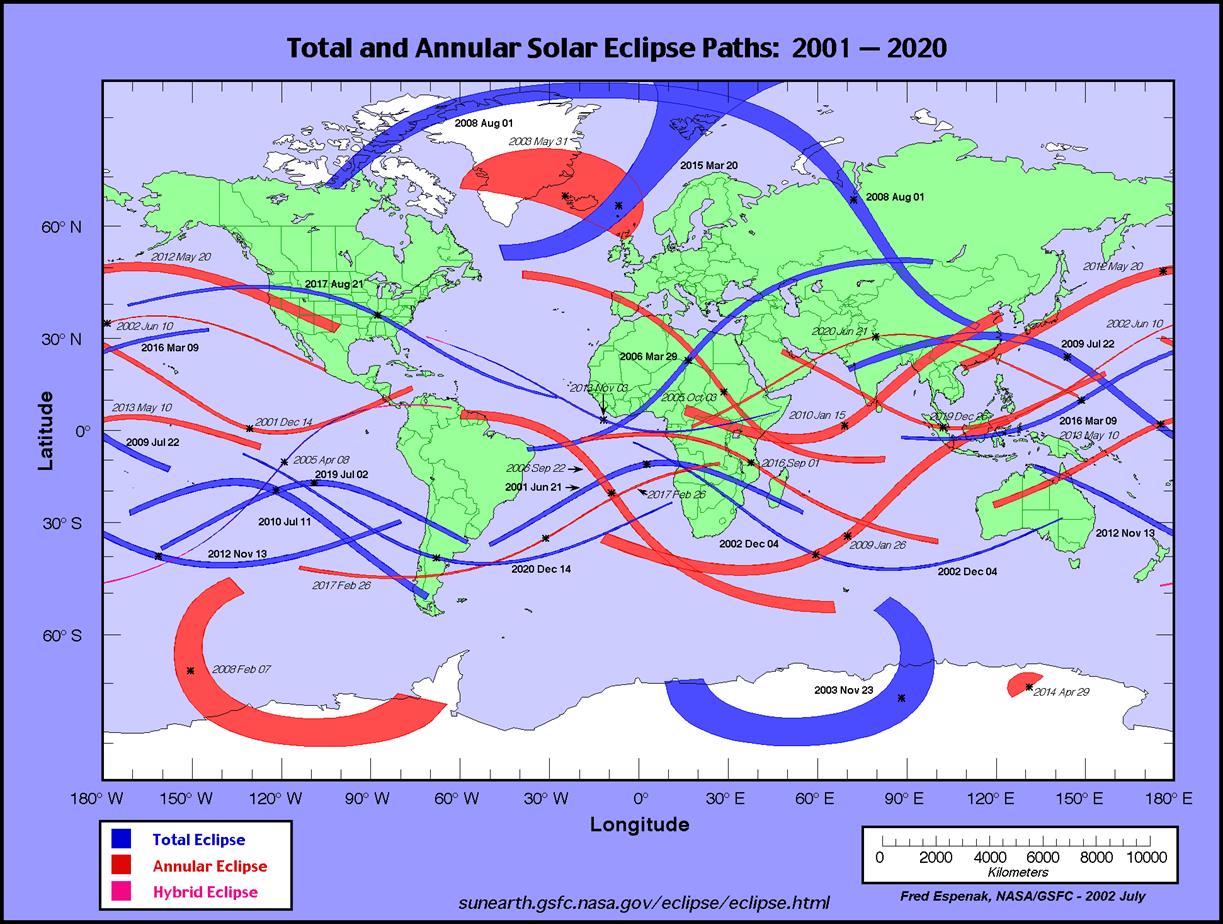 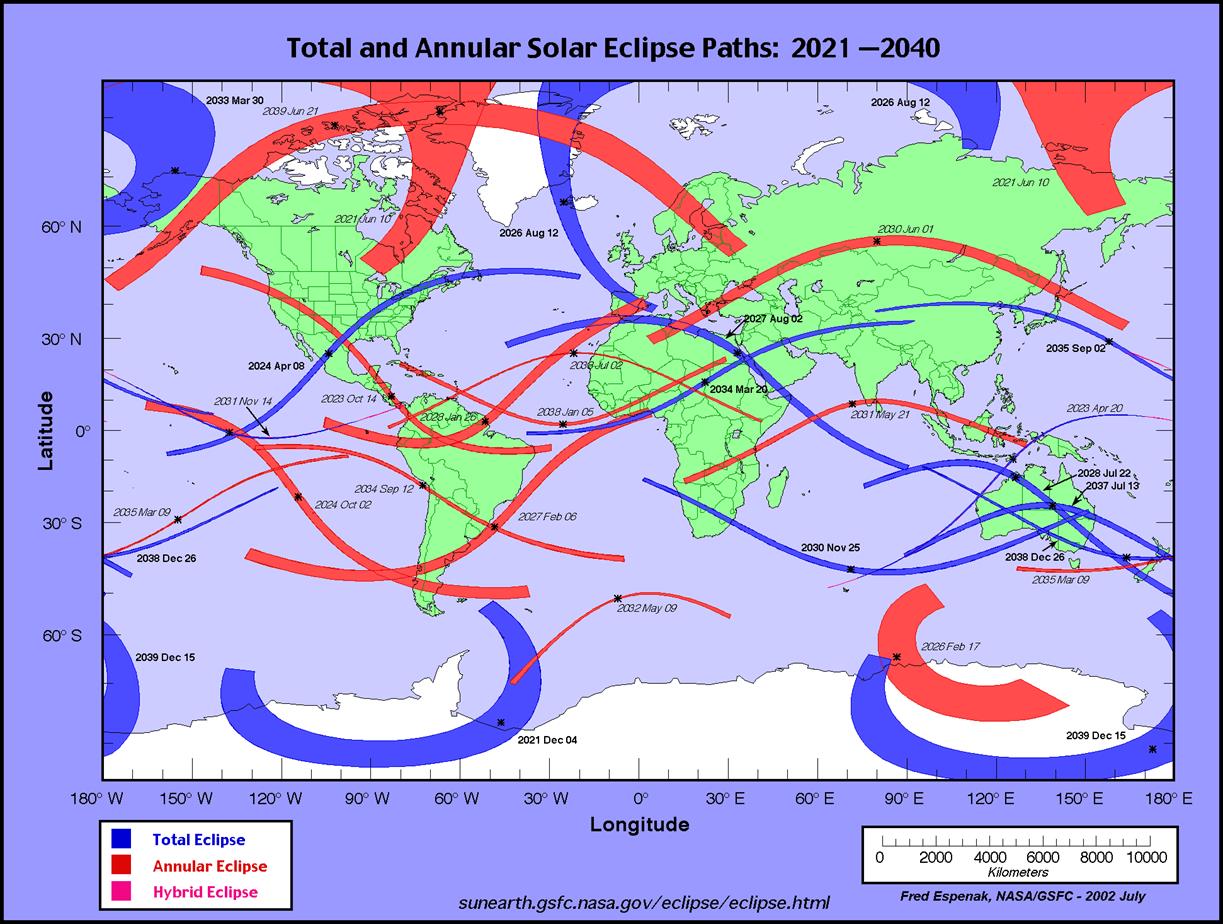 Would you like to get involved with the eclipse in a very different way? Check out these new total solar eclipse Forever stamps issued by the United States Postal Service!

However, what you see is definitely what you get. For the first time ever, a thermochromic ink was used, meaning that the ink changes when exposed to heat. So, put your thumb on the stamp, and the eclipsed sun changes into a photo of our moon eclipsing the sun! In my opinion (and I'm a stamp collector), this is the coolest postage ever issued anywhere in the world. These special stamps are available at your local post office, and are a great way to spice up the envelopes you mail.