He searched all the way back to 2004, the earliest entry on the popular high school sports website.

“The school hadn’t been 2-0 since then, at least,” Arogbonlo said. “I’ll ask our yearbook guy. But to my knowledge, it’s never happened before.”

This much is absolute: Austin, which went 0-10 last year, already has as many wins this season as it had the previous two combined.

Two more wins, and the Bulldogs will have their first four-win season since 2011. Four more wins could be enough to secure a playoff berth for the first time since 2013.

“One big difference is the trust everyone has in the coaching staff and program,” senior quarterback and team captain Jamal Franklin said. “We trust each other and keep each other accountable for everything, good or bad. We came into the season knowing we were a different team.”

There are many causes to that effect.

A big one is the addition of Trey Herrmann as defensive coordinator. Herrmann, previously head coach at Danbury and Katy Taylor, is using the same 3-4 base Austin played in the past, but the motives are different.

Salmon already has two interceptions. Tanifum, a three-year starter, has a fumble return for a score and is the team’s leading tackler.

“The biggest difference in our defense this year is with effort and accountability,” said junior defensive back and team captain Hugh Rolls. “Coach Herrmann has done an amazing job pushing us and teaching us to be something special. He is a very witty defensive coordinator who knows the perfect play-calls for our versatile defense.”

Arogbonlo said Herrmann is a teacher of the game, someone who coaches from the ground up. It was exactly what he was looking for in someone to lead the defense.

“Our players, defensively, are much smarter than in the past,” Arogbonlo said.

Offensively, the Bulldogs are led by Franklin, a pure athlete with 4.39 40-yard speed who adds diversity and variance to the run game, and senior receiver Daniel Oloso, a gifted pass-catcher with height (6-foot-2) and speed (4.5 40-yard dash).

Defense was the reason for Austin’s 10-7 win over Elsik in Week 1. Offense was the key behind last week’s win over Westbury, highlighted by Dillon Tremble’s 38-yard game-winning field goal.

“It’s kids understanding what we want,” Arogbonlo said. “I know 2-0 is a big surprise to everybody, but we honestly have much bigger goals. The shock is the games have been closer than what we expected. But if we’re going to be a playoff team, those are the kinds of games we need to win.” 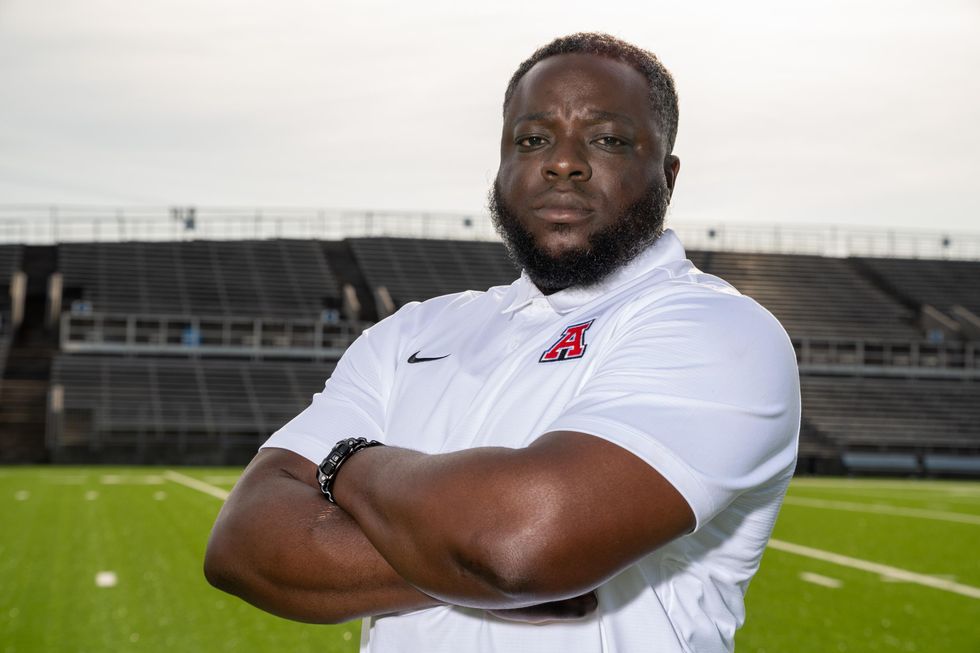 Perhaps the most identifiable change in Austin this year is culture. It started with the offseason.

Arogbonlo arrived in Sugar Land in June 2019. COVID-19 canceled the spring and summer school schedule in 2020. The following spring, COVID-19 rules and regulations were just as significant. Half of Arogbonlo’s players took online classes, and the offseason was non-existent.

This past spring, the Bulldogs were finally able to do spring football, which awards an extra 13 days of practice.

“It allows us to see what the players can and cannot do,” Arogbonlo said. “We want to make sure we’re putting our players in the best situation. We don’t believe in playbooks. We believe in players. Spring ball allowed us to see that and build on that.”

A spring boot camp that lasted several weeks enabled a stronger bond and team fortitude. It’s no coincidence that players say the chemistry and environment around the team has never been better.

“Everyone was so dedicated to get to work and change the way people look at Austin High School. The mindset this offseason was to never give up,” Franklin said.

Players are taking initiative on their own, led by team captains Rolls, Franklin, Oloso and senior offensive lineman Aries Stevens. There is a desire to make Austin football mean something.

“Ever since I was a freshman practicing with the varsity, I saw the potential for our team to be great, but what I noticed is that we lacked leadership from the players,” Rolls said. “Being named a captain by my teammates in the spring allowed me and the other captains the opportunity to take the leadership role and hold our teammates accountable. Whether it’s making sure everyone is showing up for workouts or leading workouts on our own, we had to take a hands-on approach to make sure that the potential we saw with the team came to fruition.”

This senior class is the group Arogbonlo had as freshmen when he walked onto campus that summer of 2019. Experience is a strength.

Arogbonlo is no longer having to use kids playing both offense and defense, and therefore can specify talent more, position by position, and get more detailed with coaching.

Last year, there were 87 kids in the program. This year, there are 120. Not only are Austin players and coaches seeing wins validate work and effort, but interest is growing as well.

“They really believe,” Arogbonlo said. “Nothing these kids are doing is shocking to me at all.”

That’s not just hot air. In June, Arogbonlo said there were no glaring holes on this year’s team. He felt very good about what was coming.

All the Bulldogs had to do was prove it. And, so far, they’ve done exactly that.

“This team is so tight, and they actually enjoy playing for each other,” Arogbonlo said. “We’ve been tied and down in games, and to see their grit and how they stick together and fought through adversity is what I’ve been looking for. In past years, we’d have teams that would quit. This team, it’s almost like they enjoy the fight and the struggle. And they love to do it together.”