Ask Amy: Can a debt collector take money from my paycheck?

KATY—It’s difficult to beat any team three times in one season. It’s even tougher when that team is a district rival.

But Katy made it look relatively easy in dismissing Cinco Ranch, 3-1 (25-19, 25-12, 23-25, 25-17), in their Region III-Class 6A quarterfinal Tuesday evening at the Merrell Center, earning a second straight trip to the regional tournament this weekend.

"This game was extra special for us since Cinco is in our district," said senior Chandler Lee, who led Katy with 18 kills and added two blocks. "We knew we'd have to work hard. It's an important win because now we're the only Katy ISD team in the playoffs, and so we know we're only going to have to work extra hard."

Katy is 30-16 and one win away from a return to the regional final. The Tigers defeated Cinco Ranch 3-2 and 3-0, respectively, in district play. On Tuesday, Katy surrendered a lone set in which errors plagued it, but otherwise played a dominant game.

The Cougars ended their season 20-18 overall but had an impressive postseason. Cinco Ranch, the fourth-place team out of District 19-6A, defeated a stacked and loaded George Ranch and District 17-6A champion Cy-Fair to set up a third and more meaningful meeting with Katy.

"They're a comeback team," Katy coach Karen Paxton said of Cinco Ranch, which overcame a 2-0 deficit against George Ranch and 2-1 against Cy-Fair. "They battle. They're young, but very talented, very skilled, high volleyball IQ, well-coached. I feel like we have to play our best anytime we play them, and not give away points. We did that a little bit in set 3, and we had to bounce back and minimize errors. I felt we carried over some of that into game four."

The Tigers had a strong start as junior Maddy Chaapel was big in the first set, recording six of her 12 kills.

"She stepped up and was really aggressive," Paxton said. "She mixed up shots. She's super athletic and she really executed a large portion of our game plan tonight on the outside."

Chaapel, who has had a great postseason for the second straight year, was smart and effective with ball placement.

"I think this was a game where we saw how important scouting really is, and knowing what's going to be open and when it will be open," Chaapel said. "We had that in our minds the whole game. We just knew."

Lee was the difference-maker for Katy in the second set with five kills. At one point, she scored four consecutive points for the Tigers.

"We found good spots open on the court," Lee said. "We had strong placement over power. It was about hitting line (hitting the ball down the line of a corner of a zone), really. I felt like that was Cinco's weakest area. We were trying to find open spots, and that's what we were doing. Hitting line and hitting to where they weren't."

But the Cougars, who generally play well in the third sets of games, held off a sweep. Cinco Ranch led 15-9 in the third set, watched Katy come all the way back to tie it at 22, and then held on for the win with some crucial kills by junior Courtney O'Brien and sophomore Makenna Loo late.

Katy, however, responded admirably, winning the fourth set and leading from start to finish. Aside from Lee and Chaapel, senior Jordan Gamble had 11 kills with three blocks. Senior Maddie Waak had eight kills, 35 assists and 23 digs. Senior Izzy Denton had two aces, 25 digs and five assists. 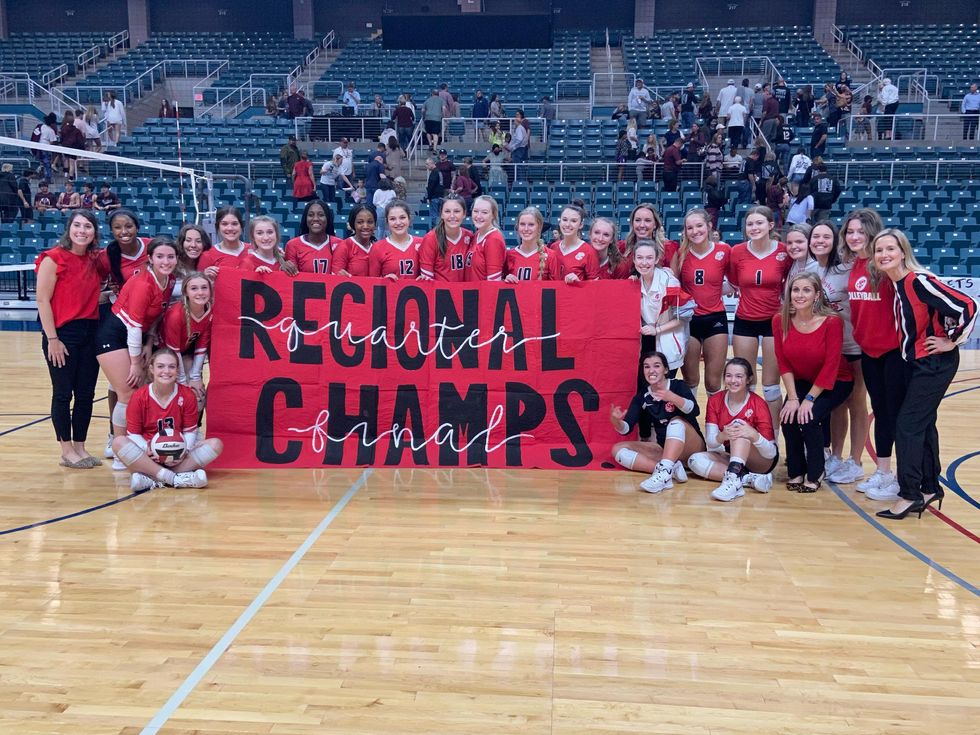 Katy is headed back to the regional tournament for the second year in a row.Dennis Silva II | VYPE Media

"We know we can do this," Chaapel said. "We can go to state. We have the talent, and we have the mentality that we're going to go far."

Paxton said the expectation all along this season has been to get back to the regional tournament. She credits not only the core of Waak, Gamble, Lee, Chaapel and Denton, but also younger players who have assumed leadership roles "behind the scenes" and a strong supporting cast program-wide.

"Our kids have a lot of heart," Paxton said. "There are a lot of great players that have come before them that these girls want to carry on that tradition. We had a saying tonight that was 'go all out.' We have nothing to lose at this point. We're just playing great volleyball and we love what we're doing."