Spring-like warmth through the weekend!

PHOTOS: Houston-area sunrises, sunsets are the stuff of Creamsicle rainbows this week

Clements senior Allison Wang had heard the horror stories. She’d heard from other girls who tried to play football about the negative backlash that ultimately made them quit the sport.

"I know some other girls who kick and have received real negative vibes," Wang said. "I was nervous about that."

On the brink of discouragement, though, Wang pursued one of her biggest dreams. Having attended Clements football games since middle school, Wang always adored the Friday night lights, the explosion of the crowd after a score, and what it would be like to be a part of Texas high school football.

"It's a sport that's just different than any other," Wang gushed.

So, in February, Wang went up to Clements head football coach Bobby Darnell and said she'd like to play football. The 2021 District 20-6A defensive MVP in soccer last year wanted to kick for the Rangers.

Darnell could not have been more welcoming.

"My main job as the athletic coordinator is to support all of our athletes and coaches," Darnell said. "I've known Allison since she was in elementary. So, it was a no-brainer. 'You want to come out? Perfect. Let's go. What exactly do you do? You kick? Fantastic.'"

Wang said what could have been a miserable experience like the ones she'd heard about was anything but.

Wang kicks the extra points after touchdowns for Clements, which is enjoying its finest season since 2009 at 5-1 overall. She has connected on 17 of 21 (81 percent) extra-point attempts. She has a kicking range of 40 yards.

Prior to the season, there was a mutual understanding that senior Lyle Link would kick field goals because of seniority with the program and being a stronger kicker. Link also punts, so he was OK letting Wang kick extra points. Senior Timothe Kroon handles kickoffs.

Wang, who wears No. 90 (her soccer number is 9) and boasts a smile that Darnell said is "contagious," has fit in seamlessly with the team, largely because of an all-inclusive culture established by Darnell, who treats Wang no differently than any of his other players.

"You have high standards and high expectations, and you expect that from everybody," Darnell said. "You can't treat anybody differently, or else you're setting them up for failure in the real world. The real world doesn't care if you're a man or a woman. They just want the job done." 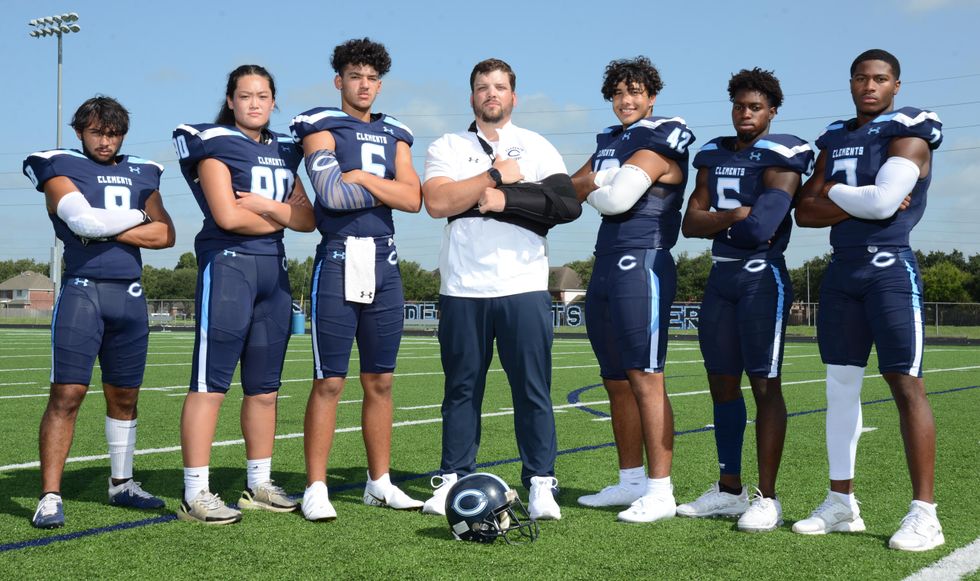 Darnell said players are protective of Wang, and he appreciates how she's taken the program's emphases on toughness and work ethic and applied that within the soccer team as well.

"It's so much fun to watch that culture go into other sports with her," Darnell said.

Wang said the most difficult thing about kicking an extra point is everything that must go right for a successful conversion.

"Timing is important, and I don't want to be too early or too late to where the rush does get there. Anything can go wrong at any given time if timing is off even by a little bit. But otherwise, I'm generally pretty calm. Soccer's helped with that, as far as not getting nervous in crowds."

But football is different, and she relishes that.

"I don't think I had ever fully grasped how different it would be," Wang said. "In soccer, there's maybe 16 girls. In football, there's 45 other boys. The team environment is so different. Soccer is more close-knit and reserved. Football is crazy, more of a family. We all get along. Football is that loud, big family. Soccer is that quiet, small family."

Wang was born in America, but her parents are Chinese. Soccer is in their blood. They love it.

But her parents weren't even aware of American football until they came to America.

"My mom goes to games and doesn't know what's happening," Wang said, laughing. "She just starts screaming whenever I'm out there. We've never been a big football family."

Wang, however, has always been awed by football, especially Clements football. That she's playing on a team enjoying one of the best years in program history is thrilling for her.

'The entire team feels this energy that this season could be ours," Wang said. "A lot of this team is seniors and we're pumped for this opportunity, as far as being different than every other year. Past years, I would say, have been disconcerting. This year, it's just different. The teachers can feel it. we can feel it. There's a chance.

"I've never seen so many people so excited for the program."

Or so many people so excited for her.

Recently, Darnell's mother, a substitute teacher at First Colony Middle School, told Wang a young girl came up to her, upset she couldn't play on the football team. Darnell's mom—"Mama Darnell" to players—asked to get a picture of Wang to send to the girl as motivation to keep up with her dream.

"That, to me, was, like, wow," said Wang, who wants to study sports management in college and become a sports agent or manager. "I can make an impact like that? That's really cool. It's pretty awesome to know people appreciate what I do."