THE BEST AT WHAT THEY DO: Numerous Astros named Silver Slugger finalists

COACH KIM: From National Champion to Varsity Football Coach, Smallwood has Carved Her Own Way at Bush

ONE OF THE FEW FEMALE HIGH SCHOOL FOOTBALL COACHES IN TEXAS ONCE PLAYED THE GAME PROFESSIONALLY.

She was also part of the first senior class for Rice women's basketball to not endure a losing season. And she won a national college basketball championship playing for the late, great Pat Summitt at the University of Tennessee.

Her legacy has flourished where it began. In Richmond, Texas.

"I'm very grateful to be here," said Smallwood, in her fourth season as varsity football assistant coach and 11th season as head girls basketball coach. "As a child, there was a lot of reasons I could've quit and stopped and gone another way. Having a strong mother, who is strong in faith, and me learning from her has guided me to where I am today."

Smallwood is a product of Lamar Consolidated High, Class of 1995. She came from a single-parent home; her mother, Laura Newsome, and late brother, Darrell, raised her.

Sports was all Smallwood knew growing up.

"I'm an athlete," she said. "I just liked competing. That was my motivation."

Smallwood started running track at the age of six and competed with the Jesse Owens travel group. She picked up a basketball for the first time in the seventh grade because a coach told her she was playing. They would not take 'no' for an answer.

Smallwood played touch football with friends in the street. She hooped at the park. She met up with friends at Crockett Middle School and had softball tournaments.

"We had a village," Smallwood said of her neighborhood across the railroad tracks from what was then Polly Ryon Memorial Hospital. "Everybody in the community was a parent to me. All the kids were sisters and brothers to me. Hispanic, black or white, we were all together."

Smallwood played basketball and volleyball and ran track all the way from junior high through high school. Her talents landed her a basketball and track scholarship to the University of Tennessee.

"Pat Summitt was a very straightforward coach," Smallwood said. "She did not lie to you. She loved you. Before I got there, she assured my mom she'd make sure I did everything I was supposed to do. And she did." 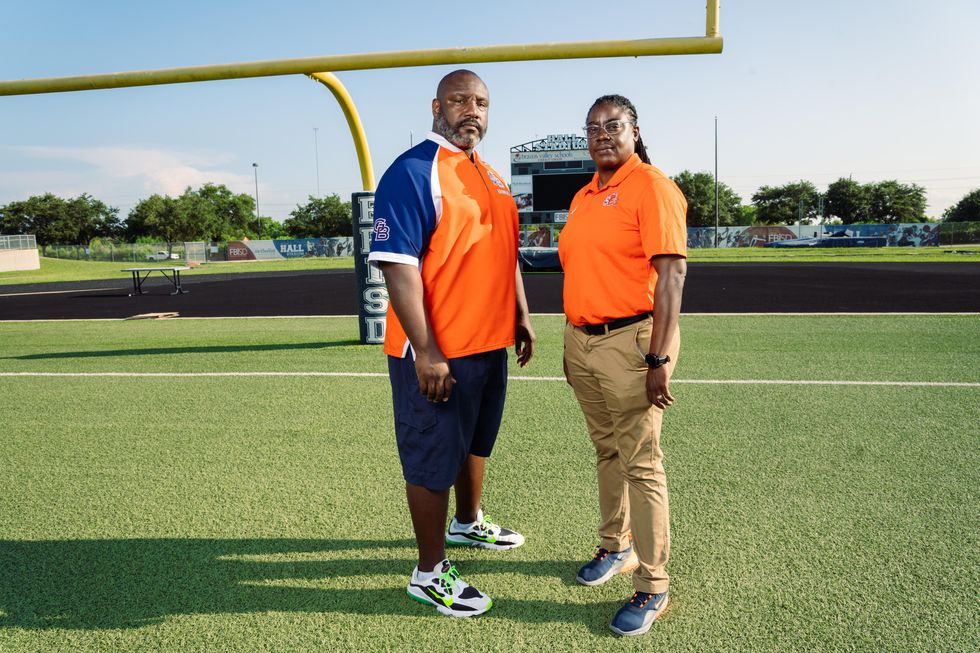 A Part of Something

Smallwood was nervous those first few months of practice under Summitt.

"She was a great woman," Smallwood said. "Strict, but a teacher. I needed to know there was somebody that cared about me and wanted to see me succeed."

Smallwood was a member of the 1996 Tennessee National Championship team. It was arguably the most influential year of her career.

Her coaching philosophy centers around discipline, and it's largely based upon observing and learning from Summitt, as well as her high school coach, Dolly Coleman.

Smallwood watched Summit interrupt classes to have a talk with players if they weren't sitting in the front row. She paid close attention to how Summitt handled players like star Chamique Holdsclaw, Smallwood's roommate, and others.

"I realized you can't love everybody the same way and you can't reach them the same way," Smallwood said. "The way she talked to Chamique, and showed Chamique things, she couldn't show me that way."

Smallwood suffered a hamstring injury and sat down to discuss her future with Summitt prior to her sophomore year. She decided to just run track that year.

But after that sophomore season, she got homesick. Plus, she didn't want to just run track anymore. And Laura was very sick.

So, Smallwood returned home to Houston and transferred to Rice.

"It was tough to leave," Smallwood said. "I wanted to play basketball at Tennessee, but I needed to be closer to my mom. I was flying to Houston from Tennessee every other weekend."

She played three seasons (1997-2000) and won a Western Athletic Conference championship. Playing with Marla Brumfield, Smallwood helped change the culture and perception of what had been a losing program.

After Rice, spent a preseason camp with the WNBA's Minnesota Lynx as an undrafted free agent. Not long after, she returned home again.

"(Coach) Brian Agler was a beast," Smallwood said. "A different kind of coach. Not for me."

By then, however, Smallwood, knew what she wanted to do.

"I wanted to give back to my community," she said. "That's when I decided to go into education. Here I am now. This is what I was meant to do.

"I love helping people out and I love seeing people succeed. I love teaching and being a part of something." 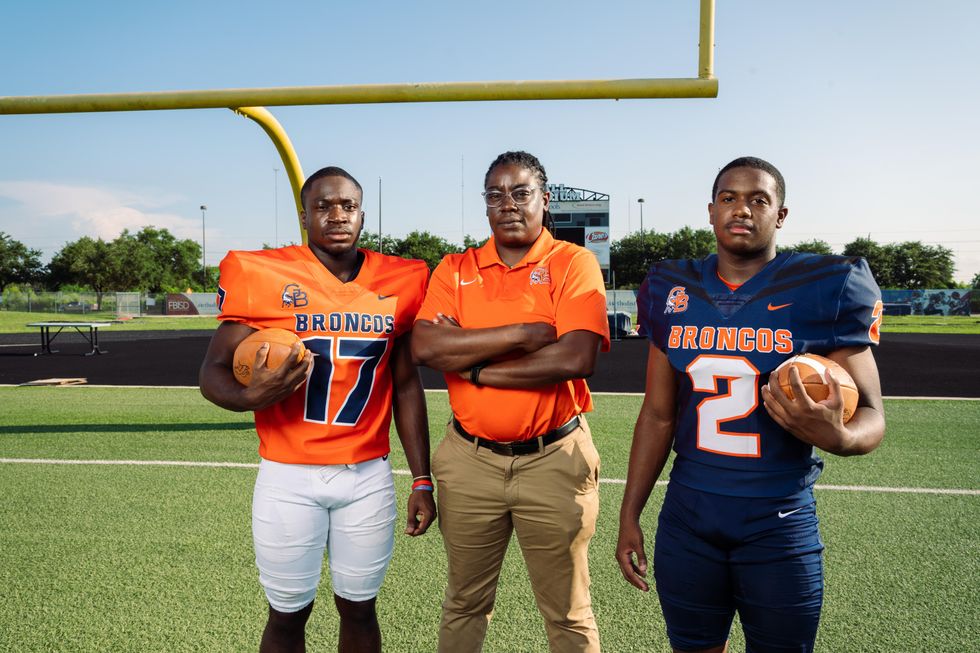 Smallwood's earliest memories of football are from middle school. She pleaded with her mother to let her play tackle.

"My mom was not having that," Smallwood said, laughing. "'You're a girl, and you will not play football with the boys.' And back then, we couldn't. But I would play flag football and play touch football in the street. Even when it came to softball, I wanted to play baseball. It was just more competitive to me, at that time."

Smallwood would eventually play tackle football. She played five seasons with the Houston Energy and Houston Cyclones of the Women's Professional Football League in the mid-to-late 2000s.

The WPFL was the first women's professional football league in the United States.

She played running back, quarterback, tight end, receiver; or, what these days is labeled as "an athlete". Smallwood won a WPFL Super Bowl with the Cyclones in 2008.

Playing the game sparked her interest in coaching it.

"I've always wanted to coach football," Smallwood said. "I'd always ask (Bush head football coach) Coach (Allen) Aldridge, and at first he was like, 'no.' At that time, he had a full staff. I think he was seeing if I was serious and knew anything about football."

Indeed, Aldridge had to get a true gauge of Smallwood's seriousness initially. Once he saw how persistent and passionate she was, it was an easy call.

"She understands the game," Aldridge said. "Just the athlete and her credentials she has and the leader she is, the guys respect her."

Aldridge tries to give Smallwood a different position to coach every two years to give her a full scope. She started her career shadowing defensive coordinator Javian Thornton, learning the entire defense. The next two years, she coached receivers. This year, she's coaching running backs. Bush is third in District 20-6A in rushing at 161.7 yards per game.

Smallwood considers herself a mother to the players. A voice of reason and assurance.

"She's going to bring a lot of energy and a lot of helpful information that sometimes we didn't really get over the years," said senior running back Adrian Cormier, who leads the Broncos with 489 rushing yards and a touchdown this season. "She knows the game. She has the knowledge that we need to be successful, and she has this vibe that makes it easy for her to relate to players."

When basketball season starts, Smallwood coaches practice until 4 p.m. then heads to the field to finish football practice until 5:30-6 p.m. During game days, she hopes the two sports don't conflict; if they do, basketball takes priority.

Still, Smallwood always makes sure she is available to the football team if needed. While she ultimately aspires to be an athletic director, being a head football coach is something she's given considerable thought to.

"It has been a dream. But I'm still kind of in the baby stages," Smallwood said.