You can watch Houston Life Live at 3 p.m. Monday through Friday! If you miss the show, you can catch it when it airs again at 8 p.m. or the next morning at 9 a.m. on Click2Houston.com and KPRC 2+ in the video player below or on the KPRC 2+ app on your streaming device.

Temperatures near 100 degrees this week

CYPRESS --- When he was doing Brazilian jiu-jitsu in Korea, Gabe Muoneke, then a 28-year-old veteran professional basketball player standing 6-foot-7 and weighing 250 pounds, kept getting beat down. Muoneke was physically overmatched by a man half his size.

"He beat me up pretty easily, over and over and over again," said Muoneke, the former Cy-Falls High star and University of Texas standout who finished a four-year Longhorns starting career among the program's leaders in scoring and rebounding. "Even when he was dead tired, he was, 'Come on, let's go again.' He just dismantled me.

"I saw what this guy did to me. I told myself I wanted to do it. I wanted to get my black belt and teach my children."

Muoneke still trains with his children at home and is qualified to teach Brazilian jiu-jitsu. He respects the sport for its discipline, how it teaches patience in working at something that doesn't award immediate satisfaction, and self-defense.

"I can disable you and hold you with little to no effort," Muoneke said, "and never hurt you."

Before he became a star on the basketball court, Dubem was a state champion wrestler and a three-time state champ in Brazilian jiu-jitsu.

The wrestling was a physical chore. The jiu-jitsu was a mental one.

"It's being able to breathe through pain," Dubem said. "In Brazilian jiu-jitsu, we have three-minute rounds. If you can't last, you're going to get beat. Same thing on the court. If someone elbows me or kicks me, I play through it. Because at the end of the game, when they're tired, I'm still going."

Dubem's lifestyle is centered around discipline and structure. Not only with his background in Brazilian jiu-jitsu, but in his diet as well.

Dubem is a vegan. Even his snacks are vegan. Lenea is constantly coming up with creative meals daily, awake as early as 5:30 in the morning everyday cooking for the kids. Dubem's favorite is quinoa, which Lenea said he eats at least once a day.

Like Brazilian jiu-jitsu, the benefit of being a vegetarian is all about the end game for Dubem.

"Diet helps me with breathing," Dubem said. "I don't get as tired as fast. First quarter, everyone wants to come out aggressive, shooting, blocking, jumping. Nobody wants to do the hard work in the fourth quarter. That's when I excel. That's when I get 30, 40 points."

Eating right is something Gabe is adamant about with his children. It's something he learned too late in his career.

Gabe said Dubem will eventually create a distinct separation talent-wise between himself and others because of strict eating habits. Lenea said she spends about $2,000 every two weeks restocking food. Every item and meal, from the spices to the morning shakes, are organic. The water the Muonekes use, whether it's to bathe or drink, is reverse osmosis.

"I tell guys, 'When my son is in college, it won't be close,'" Muoneke said. "As long as you're eating that cheeseburger, it will not be close. I learned that in the NBA. When I played for Detroit (Pistons), I was eating McDonald's. Chauncey Billups told me, 'Hey, man, you can't keep eating that crap. At this level, diet is the dictating factor.' I noticed it. I changed my diet at 29 years old and literally got a new lease on my career. If I'd just known in college, it would've been over."

Dubem has the physical maturity. He has the desire. Once he gets the mental aspect down, Muoneke said, the puzzle will be complete.

"There's a saying that a black belt is just a white belt that doesn't stop. Now I know it's true," Muoneke said. "When I fight you, I'm just not going to stop. I teach my son that he doesn't have to dunk 10 times and win 100-0. That's not how it works. You have to work the game and beat your opponent like a lumberjack, and then that guy will give in. It comes down to your mental and your diet."

A Muoneke who has the mental part down pat? Bianna, who can touch a 10-foot basketball rim.

STUDENT OF THE GAME

Every morning, Bianna wakes up and the first thing she does is make her bed. To perfection. No creases. Flat sheet. Tight pillows.

Lenea said Bianna can tell if someone's been on her bed after she's made it.

"She watches and observes a lot," Lenea said. "She doesn't just react. She sits and studies and then she reacts. She watches film before every game and will know whose tendencies are what, whether it's club or high school. She pays attention."

Bianna is the star of a dominant 31-3 Cy Ranch volleyball team. She leads the team in kills with 6.6 per set, boasting a .376 hitting percentage. She also leads the Mustangs in aces (56) to go with 3.9 digs per set.

"The teams that have the strongest bonds are the teams that win, and we have that," Bianna said. "We're really tight and close."

Bianna verbally committed to Texas A&M in late July, making for an amusing decision for her Longhorn father. But Muoneke, Bianna said, offered his full support and was influential throughout the recruiting process.

"Honestly, my dad just gave me his advice, having been in that situation, and he told me pick a school that made me feel wanted," Bianna said. "I liked the flow at A&M. I liked the environment. When he was getting recruited, Texas made him feel wanted. A&M felt right for me."

Growing up competing in sports against Dubem and her father made Bianna a competitive force of her own.

Muoneke believes a great athlete must have physical and mental capabilities in their respective sport. He believes he could have stuck longer in the NBA—he signed non-guaranteed contracts with Detroit, Houston, Charlotte, and Utah throughout his career, but was waived from each of those teams before logging an NBA minute—had he focused more on the mental.

"The physical portion, (Dubem) is great at it," Muoneke said. "He's a great athlete, he jumps out of the gym, he's super fast. The mental part of it, Bianna has mastered. She's just now starting to realize she's strong and can jump. Everything else, she's been doing mentally. She places the ball in certain spots, she's a great passer. Everything technical that's necessary to be successful in volleyball, she's very good at." 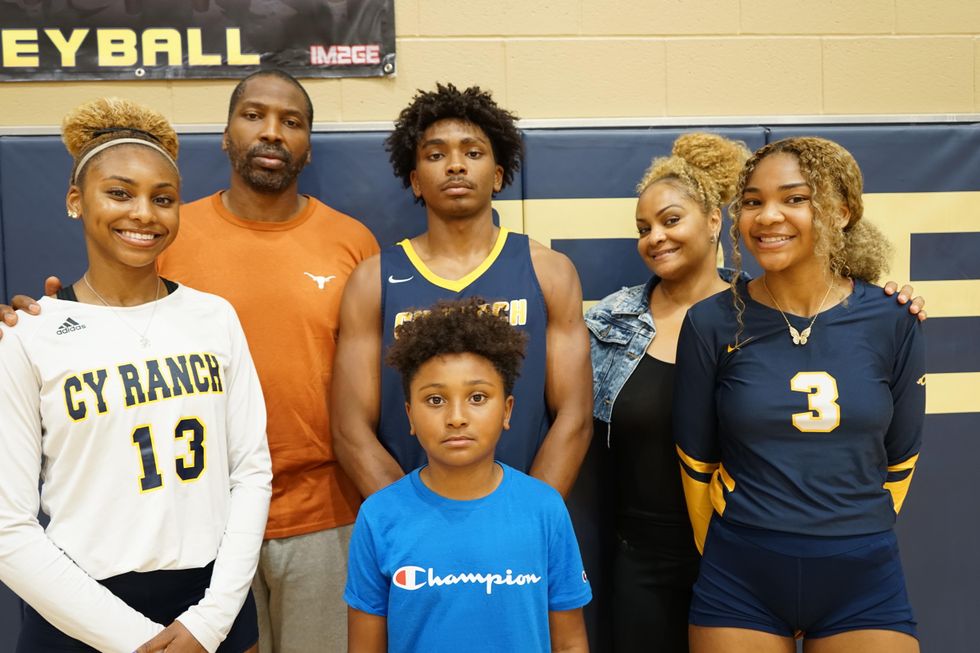 Arianna would likely be playing varsity volleyball at Cy Ranch as a freshman, but she has to play the year on junior varsity after transferring schools. So, she has settled for being team captain and leading the JV in scoring.

Arianna has the potential to be better than either Dubem or Bianna. Athletically, even in a physically gifted family, Arianna is different.

"She is a physical specimen," Muoneke said.

"She just turned 14 and is supposed to be in the eighth grade," Lenea added. "Her strength is unbelievable. Her hands are huge."

Lenea said Arianna, who also competes in Brazilian jiu-jitsu and fares well in city competitions, is already getting collegiate scholarship offers. Yet another Muoneke on the rise.

Gabe has lived in Cypress since he was eight years old. This is home for the Michigan native. He said the city has been good to his family, and they adore Cy Ranch.

"It's become a home for our children," Lenea said. "Dubem has done well, the girls have done well. The coaches are great facilitators, great leaders. We're very happy and thankful. It's a great school."

The Muonekes live by Hebraic laws, which are more culture than religion.

"Our faith, our culture, our dedication to being better than the person in front of us … we don't mind losing, but we do mind somebody making us stop," Muoneke said. "But that will not happen. It's a mentality predicated by our culture, belief and faith."

The Muonekes are not a family envious of each other's successes or status. There is no frustration for any of the kids living in Muoneke's prominent shadow as an athlete, simply because he ensures they stray from it and develop their own path.

The family did not own a basketball hoop until Dubem expressed interest in the sport when he was 11. Only when they would hear Dubem persistently bouncing a basketball in the garage did the Muonekes build a half-court in the backyard. Just like when Bianna expressed a passion for volleyball, Muoneke had a collegiate regulation volleyball court built.

Bianna said she appreciates Muoneke being "hands-on." He records all of her games. Dubem said Muoneke taught him everything he knows in basketball.

"He's my teacher in life, basketball," Dubem said. "Everything, I go to him for. If my foot is off or my hips are a wrong way, he'll correct it. I look up to him in the crowd and he tells me what I need to do. A lot of challenges and adversity I'll face in my life, he's trained me to push through."