INSTANT REACTION: Westlake Too Much for Carroll to Claim No. 3

ARLINGTON - In a matchup with so many storylines, the main theme of the 6A Division I State Championship was Westlake's ability to score at will and hold a dynamic Southlake offense in check in the second half.

Southlake touted the 5-star, No. 1 quarterback in the nation in Quinn Ewers, but Westlake's Cade Klubnik stole the show with his pinpoint accuracy, poise in the pocket and his pure athleticism when he carried the ball.

The game completely turned when Westlake got the game's first stop and subsequently took the lead. Southlake responded late in the second quarter to tie the game at 21, but Westlake went on a methodical, 5-minute drive to go up 28-21.

A hurried Ewers threw an interception on Carroll's ensuing possession. To start the second half, Westlake scored to open up a two-score game - a perfect bookend around the half - as that was a start of a big run by Westlake, highlighted by a big, one-handed interception by Michael Taaffe - his second of the night.

Taaffe's two INTs was enough to name him defensive MVP for the second straight year.

After an INCREDIBLE one handed interception @CadeKlubnikQB bounces out and scores again for Westlake. They now lead Southlake Carroll 42-21 with 6:48 left in the third quarter. @tommy_yarrish | @VypeATX | @VYPEDFW | #UILState pic.twitter.com/nBMK6OkRxG

At that moment, the game was essentially over and Westlake would coast to a 52-34 win and its second straight state title. 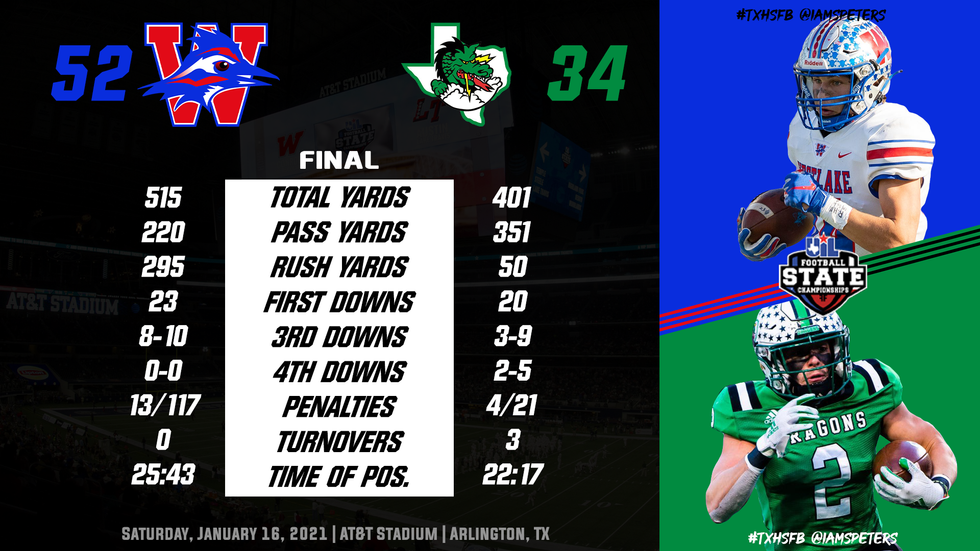