ARLINGTON - Oh how different things work out from Week 2 to the state finals.

In the first matchup, Sterling City erased a 14-point second half deficit and won a close game, 44-40, over May. In the rematch, a shootout looked to be brewing until Sterling City (15-0) put the clamps down to run away with a 68-22, mercy rule victory en route to its first-ever state championship.

Cross Knittel, the game's offensive MVP, was electric for Sterling City, accounting for 311 total yards and five of his team's touchdowns.

The route wasn't without some challenges early on, though. May scored on its first play from scrimmage, a 67-yard run by Kaden Halk, to take an 8-0 lead.

Sterling City responded in two plays to tie the game and then forced a turnover on downs - the first of three in the first half - that resulted in another Sterling City score.

May countered, but from that point on, it was all Sterling City. Sterling City scored late in the first quarter to take the lead again and then proceeded to outscore may 40-8 in the second quarter.

The Sterling City defense forced a fumble at the goalline, intercepted a pass and forced two more turnover on downs all while scoring on all of its possessions.

The game was finished as Sterling City hit the 45-point mercy rule as it scored on the first play of the second half. 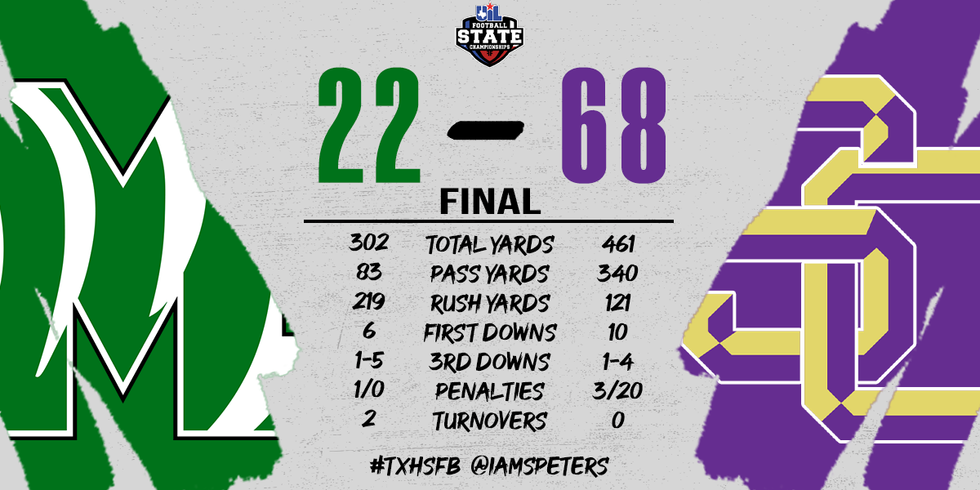