King cake from scratch: A Louisiana gal in Houston makes her first in her grandmothers’ memory

Class 4A teams and down just finished the second round of the playoffs this past weekend and are now heading into the Area Round. Who earned a VYPE Helmet Sticker this week?

We not finished yet...🏆 pic.twitter.com/EYJMy912TA

Huffman made school history last week defeating Brazosport 42-14 and advancing to the third round of the playoffs, which had never been done before. Prior to that win, the playoffs have always ended for Huffman in the second round. A big key to the victory was the play of quarterback Luke Thomas, who finished 9 of 15 for 103 yards and two touchdowns and also had 92 yards and two scores rushing, including one from 51 yards out. Thomas finished with four total touchdowns for the Falcons. What a game by him. Huffman moves on to play Kilgore on Friday.

Another strike from @NeedvilleF QB Trevor Baker. This kid can spit it a little bit. Blue Jays are back inside the Lindale 10. #TXHSFB pic.twitter.com/UxJdgduag6

Needville saw its season come to an end last week with a 70-56 loss to Lindale. The Blue Jays were led in the game by quarterback Trevor Baker who finished 15 of 36 for 307 yards and two scores. The senior signal-caller finished his final year leading the Blue Jays offense with 2,164 yards passing and 21 touchdowns.

Stafford saw its 2020 season come to an end on Saturday as the Spartans fell to Chapel Hill 40-14. A bright spot for Stafford in the game was the play of Kaleb Roberts. Roberts finished 4 of 10 for 102 yards and a score and then rushed for another 88 yards and a score. Roberts racked up 190 total yards and netted both scores for Stafford.

El Campo saw its 2020 season come to an end last week with a 27-14 loss to Kilgore. The Ricebirds' offense was paced by its running game, which was fueled by Rueben Owens II. The sophomore continued to show why he is one of the best running backs in the Class of 2023. Owens rushed for 120 yards and a score on just 10 carries, averaging 12 yards per tote. Owens finishes his sophomore campaign with a 1,511 yards and 22 touchdowns. In nine of El Campo's 11 games this fall, Owens rushed for more than 100 yards and twice he broke 200 yards. His season high was 214 yards against Needville. 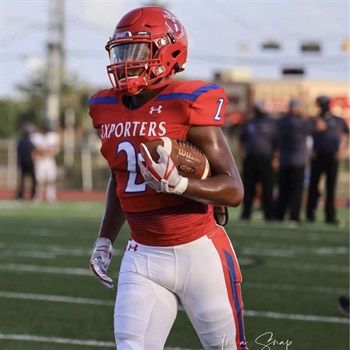 Brazosport's season came to an end last week in a 42-14 loss to Huffman. The Exporters were led by junior running back Paul Woodard, who is going to be an exciting player to watch into 2021. Woodard finished with 154 yards and a score on 36 carries for the Exporters. Woodard finishes the season with 1,417 yards and 17 touchdowns. He eclipsed the 100-yard mark eight times this fall.