Class 4A teams and down just finished Week 3 of the season this past weekend. Who earned a VYPE Helmet Sticker this week? 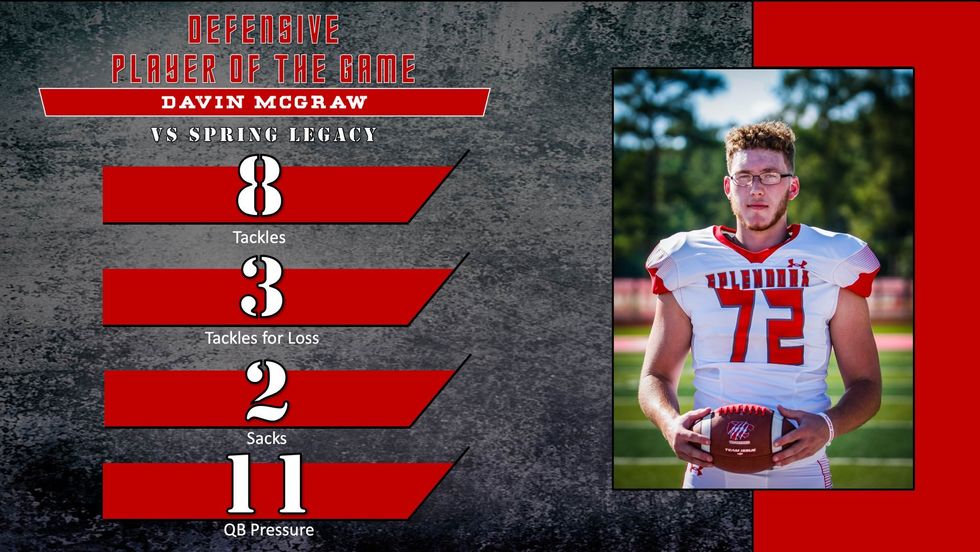 After a pair of tough road games, Splendora opened up the home portion of its schedule with a 50-40 win over Legacy School of Sports Science. The Wildcats were led on defense by Davin McGraw, who had eight tackles, two sacks and pressured the quarterback 11 times. That is an overall defensive performance by McGraw, who earns a VYPE Helmet Sticker this week.

Hitchcock battled with La Marque this past week and pulled off a 22-14 victory, to move the Bulldogs to 2-1 on the 2020 season. A big reason for the win was QB Christian Dorsey. The junior signal-caller led the team with 138 yards and two scores on 16 carries. He also completed four passes for 36 yards. Dorsey has a little wiggle to his game and showed off the wheels against La Marque. A VYPE Helmet Sticker for him!

Bay City is an unbelievable story this season so far. After going 0-9 a year ago, the Black Cats are 3-0 to start this season after a 42-31 victory over Wharton on Friday. RB Davieyon Curtis went off! The senior had 123 yards and three scores on 17 carries. He averaged 7.2 yards per carry. Curtis also had 113 kick return yards and 66 receiving yards, pushing him to 302 total yards for the game. That is a heck of a game! VYPE Helmet Sticker for sure!

Livingston had lost seven-straight games heading into their showdown with Orangefield on Friday. The Bobcats were down 21-20 and going for a 2-point conversion. But Colin Hurtt had other plans. Hurtt absolutely blew this play up in the backfield, which preserved the 21-20 victory for the Lions and their first win since September 27, 2019. The Lions are now 1-2 on the 2020 season. Hurtt definitely earned a VYPE Helmet Sticker this week.

The Bellville Brahmas are rolling at 3-0. The Brahmas are coming off a dominating 50-29 victory over Stafford last week. Robert Briggs was huge in the game, racking up 294 all-purpose yards. Briggs had 97 yards rushing and two scores, 31 yards receiving and two scores and on top of that 166 kickoff-return yards, including taking one back 86 yards for a touchdown to open the third quarter. He had himself a NIGHT! VYPE Helmet Sticker for this performance is well earned.