DALLAS – Sign up for The Brief, our daily newsletter that keeps readers up to speed on the most essential Texas news.

DALLAS — In the corner of the brightly lit, heavily bannered conference hall for this year’s Conservative Political Action Conference, an empty jail cell sets the scene of a Make America Great Again performance art piece. A sign fixed to the exterior of the cell warns “#younext.” The would-be prisoner is an actor playing the part of a Jan. 6 insurrectionist.

The diorama painted a sympathetic portrait of the rioters arrested for their roles attacking the nation’s Capitol in protest of an election that saw the defeat of former President Donald Trump.

The display was emblematic of the overall attitude of the annual event for the nation’s most die-hard conservatives. There was virtually no acknowledgement by attendees of the conference of Trump’s role in instigating the attack, which has been the focus of testimony presented by the U.S. House committee investigating the insurrection in recents months. Trump, who closed out the event, was welcomed with open arms by Texans and those who traveled to the state to see him, as he has been teasing a 2024 presidential run.

“I’m over the moon, I’ve been trying to see him for years,” said Therese Boehnlein, who drove from Waco to see Trump.

Trump stuck to a familiar script and repeated the falsehood that the 2020 election was stolen from him, even as those claims have repeatedly been debunked by even his own former aides. He painted cities run by Democratic leadership as hellscapes awash in crime and lamented what he described as an open southern border with Mexico.

“We created the safest border in U.S. history by far, by far. And now it’s the worst border ever in history,” said Trump of President Joe Biden’s administration.

Trump also derided what he described as the indoctrination of students by liberals intent on destroying traditional family values, touching on battles in public schools over the content of library books, what sports teams transgender students are allowed to play on, and how teachers are allowed to talk about race and history.

Trump received some of his most thunderous applause of the night with his suggestion to “abolish the Department of Education.” 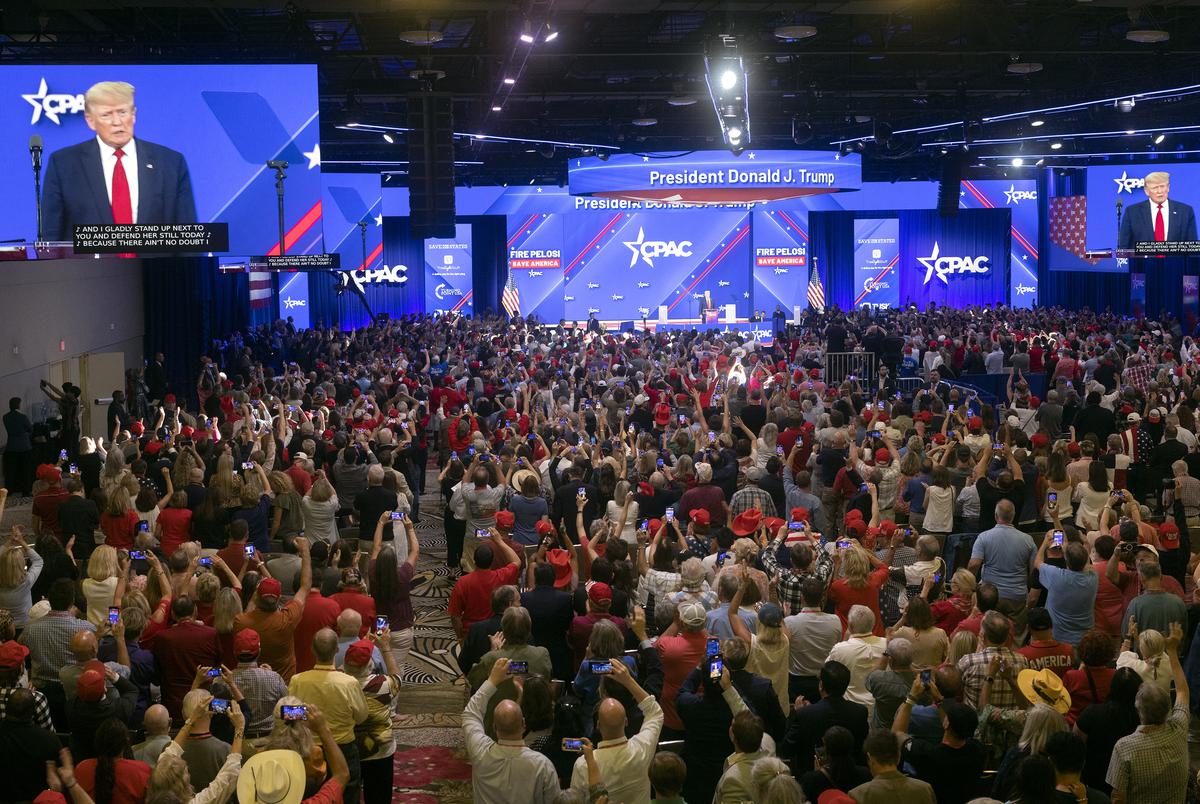 For Anna Zimmerman of Dallas, Trump’s focus on education resonated most with her.

“I liked his plans for the future,” Zimmerman told The Texas Tribune as attendees filed out of the conference room. “We’ve got to do something about our educational system. We won’t be successful if we teach them about transgenderism.”

Zimmerman said she expects and looks forward to an announcement from Trump that he’ll run again for president.

“Everything is timing and he is a man of perfect timing,” Zimmerman said.

A straw poll conducted at the conference found that Trump is still a favorite among attendees. Trump received 69% of the vote to be the 2024 Republican nominee for president. Florida Gov. Ron DeSantis came in second with 24%. Texas’s own Sen. Ted Cruz, who spoke at the conference on Friday, came in third with 2%.

Though he’d hoped to see Trump announce his 2024 run at the convention, Ariel Kohane said he expects Trump will announce after the midterm elections, so he can focus on endorsements. “Trump will have the greatest impact ever on the midterms. He selects winners,” said Kohane, who traveled from New York to see Trump.

Jen Loh Salinas of San Antonio, the vice president of Latinos United for America, said Trump — and his border wall — are the key to America's success. Born and raised in Laredo, Salinas said that border communities are scared of the violence that she attributed to migrants crossing the border.

With her teenage daughter next to her, Salinas pointed to schools as one of the major reasons she said Latino voters were moving to the right. Salinas took her daughter out of public school because she thinks they are “sexualizing children” — a common refrain used by attendees and speakers describing public school concerns at the convention, alluding to the discussion of gender identity. She said the cost of private school is worth what she sees as the best education for her daughter.

Elizabeth Gomez-Crocker also took her children out of public school, citing among other things, critical race theory, an academic framework that teaches structural racism exists in America, but which educators say isn't being taught in Texas public schools. Working as a substitute teacher, Gomez-Crocker picked up a second job driving for Uber to pay for the cost of the private, religious school in Arlington.

She’s concerned by the cultural changes she observed in schools. To fix that, she would like to see more religion in schools. Instead of supporting more school choice, which would divert money from public education to schools parents choose, Gomez-Crocker said, “Put God back in school instead of money following the child.”

The final day of the convention at the Hilton Anatole in Dallas featured a host of GOP leaders loyal to Trump. Some of the Texas officials who spoke earlier in the conference included Cruz, Abbott, Texas Attorney General Ken Paxton, and Lt. Gov. Dan Patrick, but the thousands that gathered saved much of their energy and enthusiasm for the party’s de facto leader.

Earlier in the convention, state Democratic leaders criticized the GOP’s welcoming of Hungarian Prime Minister Viktor Orbán, who spoke at the convention on Thursday, a week after his racist remarks on European immigration. Those comments reportedly resulted in the resignation of one of Orbán’s longtime advisers.

MAGA-branded freedom was for sale up and down the halls of the political conference in the form of alternative cellphone providers, conservative children’s books — including one written by U.S. Rep. Dan Crenshaw, R-Houston — and stilettos bejeweled with Trump’s name. And this year’s CPAC didn’t make attempts to memorialize the GOP before Trump. One booth sold a framed portrait of Ronald Reagan, but there was little reference to other former Republican presidents George W. Bush or George H. Bush, even with the conference taking place in their home state. One attendee bristled at the former president’s name, “Bush is part of the establishment.”

Between speakers lamenting Biden’s presidency and China’s influence on America, attendees on Sunday laughed at a brief satirical news segment. Jesse Kelly played the part of news anchor of the fake media outlet “Socialist News Network,” while making lewd jokes about Vice President Kamala Harris and downplaying the number of people who died from COVID-19.

“This virus has almost killed as many people as Hillary Clinton,” said Kelly. Over 1 million people in the United States have died from COVID-19.

When you join us at The Texas Tribune Festival Sept. 22-24 in downtown Austin, you’ll hear from changemakers who are driving innovation, lawmakers who are taking charge with new policies, industry leaders who are pushing Texas forward and so many others. See the growing speaker list and buy tickets.