SAN ANTONIO — The No. 3 Democrat in the U.S. House of Representatives charged into a raging national firestorm over abortion rights Wednesday as he visited Texas to campaign with U.S. Rep. Henry Cuellar, a rare Democrat who opposes the practice, in his hotly contested primary runoff.

House Majority Whip Jim Clyburn’s trip was announced over a week ago, but it fell two days after Politico published a leaked draft opinion from the U.S. Supreme Court that favors overturning Roe v. Wade. The timing of the news cast an uncomfortable spotlight on Cuellar — and the senior Democrats who support him — as he was the only House Democrat last year to vote against a proposal to codify Roe v. Wade.

As Clyburn traveled to Texas on Wednesday morning, Cuellar’s progressive challenger, Jessica Cisneros, issued a statement calling on Democratic House leadership to rescind its support for Cuellar in light of the Roe v. Wade bombshell. But Clyburn was unswayed as he attended a series of events across the city with the Laredo congressman, stressing that he does not always agree with Cuellar but believes divergent views are healthy for democracy. In doing so, Clyburn sent a message that the Democratic Party should not shun abortion opponents.

“This whole notion that you’ve got to agree with everybody on everything is pretty sophomoric to me,” Clyburn added.

Addressing a crowd of about 80 people from the stage of his campaign rally, Clyburn hailed Cuellar for his role as a chief deputy whip, saying together they have been “very effective in getting Joe Biden’s [agenda] across the finish line.” He joked that he does not always agree with Cuellar just like he did not always agree with his late wife of 58 years. But he said people do not “grow” if they speak only with those they agree with.

“We have to sit down with people with whom we do not agree and try to find common ground so that you do what is necessary to continue moving this country forward,” Clyburn said.

Cuellar did not shy away from his party-splitting ways when addressing supporters. 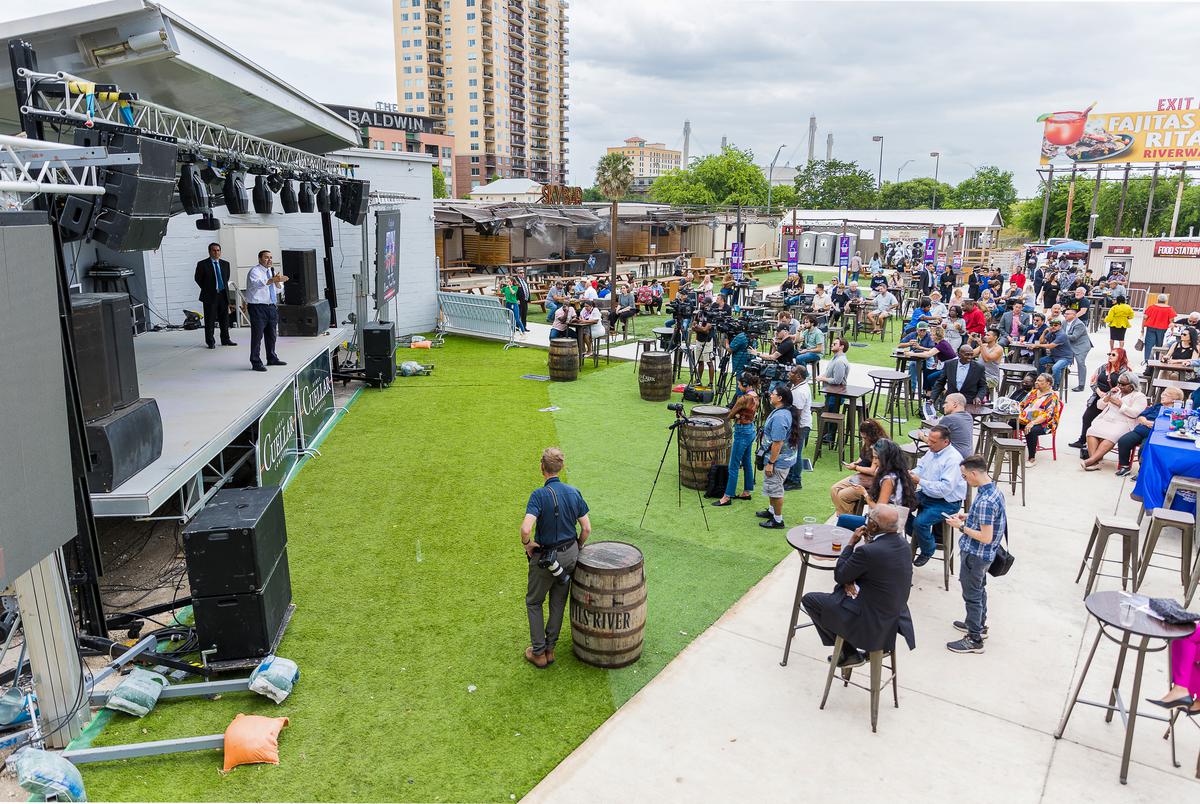 The crowd at Cuellar's Get Out the Vote Rally in San Antonio on Wednesday. Credit: Chris Stokes for The Texas Tribune

“I’m a Democrat — but I follow the words of [Lyndon B. Johnson], who said many years ago, ‘I’m an American, I’m a Texan and then I’m a Democrat — in that order,’” Cuellar said. “If you put the party first before your country, you’re doing a disservice. I think what we need to do … is make sure that we put our country, our district, first, and that’s what I do.”

Cuellar and Cisneros are facing off again after she first ran against him in 2020 and lost by 4 percentage points in a head-to-head primary. This time, she forced him to a runoff after a primary that was upended in January when the FBI raided Cuellar’s home in Laredo. The FBI has not said what it was investigating, and Cuellar has denied any wrongdoing.

The runoff was relatively low-key until news broke Monday about the Supreme Court’s intentions, which set off Democratic leaders vowing to fight back in Congress. But Cisneros and other progressives suggested those were hollow words if leaders continued to stand by Cuellar.

Cuellar has the support of not only Clyburn but also House Speaker Nancy Pelosi and the No. 2 House Democrat, Majority Leader Steny Hoyer. Their names and others were featured prominently on campaign literature that was handed out at the rally.

“​​With the House majority on the line, [Cuellar] could very much be the deciding vote on the future of our reproductive rights and we cannot afford to take that risk,” Cisneros said in her statement. “I hope Democratic Party leadership won’t stand in the way of delivering for South Texans.”

Asked about the high court’s leaked opinion after the rally, Cuellar reiterated a statement he issued Tuesday evening. He criticized the draft opinion, saying it is “not based on precedent” and “not incremental in nature like they should be.” But he told reporters he is a Catholic and “you know my position,” adding that many people in his district believe in “at least some sort of limitation on exception.”

After the rally, attendees said they supported Cuellar, often offering effusive praise and recalling a long relationship with him, but made clear they disagreed with him on abortion.

JoAnn Ramon, a 78-year-old party activist who said she has known Cuellar since he served in the state House, flatly said she would disagree with the Supreme Court overturning Roe v. Wade.

“I have never had an abortion, would never have an abortion, none of my children have had one — thank God none of my grandchildren — but I don’t tell people what to do with their bodies,” she said. “So no, I’m not pro-abortion — I’m pro-choice and Henry is not, and that’s OK. I’m a Catholic, too. Henry and I can agree to disagree. That’s the beauty of Henry Cuellar.”

State Rep. Barbara Gervin-Hawkins of San Antonio, a Cuellar endorser who spoke at the rally, also said her views on abortion did not align with Cuellar’s. But she said she understood that belief was grounded in his Catholic faith.

“I’m pro-choice all the way, OK? But that’s one issue,” she said.” That one issue don’t separate me from supporting someone in my party because we can agree to disagree, and I hope we as Texans and we as Americans really start looking at it that way. One issue doesn’t stop us from having a relationship.”

The rally was part of multiple events that Clyburn did with Cuellar on Wednesday in San Antonio. Earlier in the day, they attended a private gathering with faith leaders on San Antonio’s East Side and after the rally, Clyburn was set to headline a fundraiser for Cuellar.

Regardless of who wins the runoff, Republicans believe they have a chance to flip the district as they push to make new inroads in South Texas. They are currently in a primary runoff for the seat, though the national GOP has coalesced behind Cassy Garcia, a former staffer for U.S. Sen. Ted Cruz.

In defending his campaigning for Cuellar, Clyburn nodded at the potential for a competitive general election.

“I would ask anybody: Which is more important — to have a pro-life Democrat or to have an anti-abortion Republican?” Clyburn said. “Because come November, that could very well be the choice in this district.”

Disclosure: Politico has been a financial supporter of The Texas Tribune, a nonprofit, nonpartisan news organization that is funded in part by donations from members, foundations and corporate sponsors. Financial supporters play no role in the Tribune's journalism. Find a complete list of them here.