Harris County flags to be flown at half-staff in honor of fallen Pct. 4 Deputy Kareem Atkins

Finishing off a perfect fall weekend!

What surprised Texas retiree Kathy Hardman most was not that she got COVID-19 five months after being fully vaccinated.

And it was not even that she qualified to receive an increasingly popular — yet still largely unfamiliar — experimental treatment that had been prescribed to some of the most powerful people in the country.

What shocked the 66-year-old grandmother of four was that the monoclonal antibody infusion therapy, estimated to decrease chances of hospitalization by up to 70%, was available to her at her hometown hospital in Mount Pleasant, a community of 15,000 in rural Northeast Texas.

“It’s amazing to me that we have this available to us in little old Titus County,” Hardman said on Friday, less than 24 hours after she was diagnosed and got her infusion at Titus Regional Medical Center.

The infusions are, in fact, more available and accessible to Texans than ever before, with ever-loosening restrictions on who may qualify, more people hearing about them and an increasing number of doctors across the state learning about the therapy and prescribing it to their patients suffering from COVID-19. 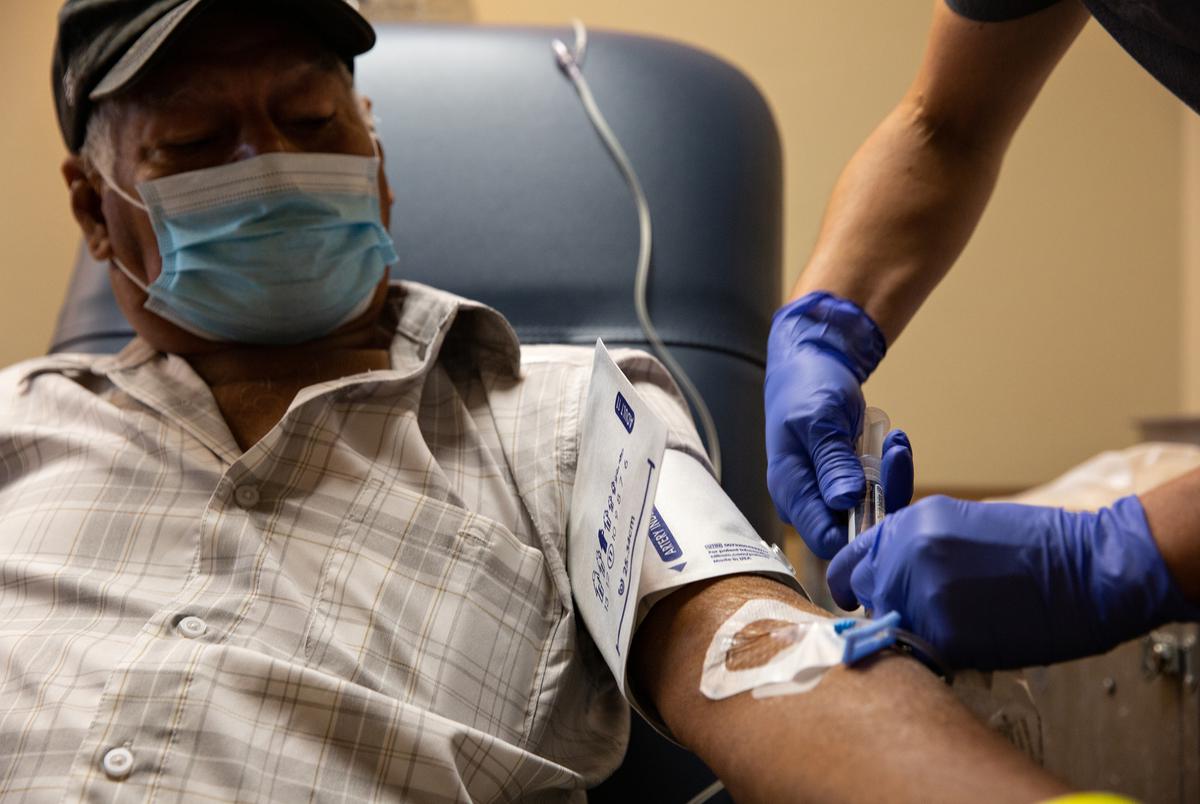 The Regeneron treatment, the therapy being used by state-run infusion centers, was used by both then-President Trump last fall and Gov. Greg Abbott last week after they each were diagnosed with COVID-19. Houston-area Congressman Troy Nehls posted on social media he received the treatment Saturday, after testing positive for the virus. The therapy uses antibodies developed in a lab and injected into the patient, usually through an IV drip, to help their own antibodies fight the virus.

Abbott and other state leaders, including the directors of the state’s health department and emergency management divisions, have pushed the experimental infusion therapy since it was given emergency use authorization for certain patients by the U.S. Food and Drug Administration in November.

But after a slow response by an initially skeptical medical community and by hospitals that were too overwhelmed by the pandemic to devote time or space to offer the hourslong treatment appointments, the therapy is finally being recognized as an important part of the arsenal against a virus that has roared back this summer.

Demand has increased across the country as COVID-19 cases have exploded. The therapy’s distributor, AmerisourceBergen, has sent 136,932 treatment courses of monoclonal antibody therapies to Texas since December. More than a quarter of them, nearly 37,000 treatment doses made by Regeneron, arrived this month, according to the Texas Department of State Health Services.

There are now about 140 doctors’ offices, hospitals, clinics and infusion centers in Texas that can not only administer the drug, but order it directly from the company, making it easier to keep it in stock.

The treatment is free for patients, who are required to have a prescription and meet certain guidelines.

“We prescribe it all the time,” said Dr. Emily Briggs, a private physician in New Braunfels who was hesitant about the therapy at first but began prescribing it in March after learning more about it. “We’re using it a lot. The unfortunate truth is that my patients who are unwilling to get the vaccine want us to throw everything at them when they get this virus.”

And more are catching the virus every day in Texas, where the delta variant is being blamed for what health care officials describe as the worst surge in infections that the state has seen since the pandemic began.

The result is twofold: a spike in hospitalizations of unvaccinated people, who represent more than half of the Texas population but more than 95% of patients hospitalized with COVID-19, and a strain on intensive care units. More than 100 hospitals have reported few or no ICU beds available in the past week.

On Thursday, 10,772 new confirmed cases and 3,285 new probable cases were reported across the state, and 12,841 people were in Texas hospitals with COVID-19.

Those grim statistics are the main motivator behind the sudden re-emergence of previously shuttered mass infusion centers as a primary tool in helping keep the hospital system from buckling under the strain of too many patients.

Most of the centers supported by the Texas Division of Emergency Management that had opened at the end of 2020 and early 2021 were closed or turned over to locals months ago, when hospitalizations and deaths dropped in the wake of mass vaccination efforts.

Mobile treatment units and hospitals kept offering infusions, but the mass centers weren’t needed as much because the hospitals were able to handle patient loads once again. In June, Texas providers received fewer than 2,000 monoclonal antibody treatment courses, according to the Texas Department of State Health Services.

Throughout the January surge, Abbott and other state leaders criticized the low rate of prescriptions that physicians were writing for the therapies, which were arriving to the state on a weekly allotment through the U.S. Department of Health and Human Services.

State and national leaders repeatedly suggested that part of the reason hospitals were becoming overwhelmed during the winter surge was that not enough doctors were prescribing the treatment, which they argued could keep patients from requiring a hospital bed.

Physicians at the time complained that the criteria set by the U.S. Food and Drug Administration and the manufacturers of the treatment limited their ability to prescribe it. A patient’s age, the timing of their symptoms and their risk factors all had to be considered. Doctors said too few met all the criteria — and some patients weren’t showing up at their offices early enough after the onsent of symptoms for the therapy to work properly.

Several, like Briggs, the New Braunfels physician, did not want to use their patients “like guinea pigs” and preferred to wait until the therapies were more proven.

Then delta hit, driving hospitalizations back up, and this time, the health care community is embracing antibody therapy — and even encouraging each other to use it by putting together public awareness campaigns and training sessions.

On Thursday night, nearly 250 people attended a private virtual town hall for the medical community hosted by the Travis County Medical Society and the Dell Medical Center at the University of Texas at Austin. Its purpose: to answer questions from doctors and nurses about the therapy and encourage them to start prescribing it.

In May, the FDA expanded the criteria for who can receive it, dropping the qualifying age from 55 to 12, which gave more discretion to the doctors who would be writing the prescriptions. The changes also included new weight guidelines that allow some 75% of Texans to qualify to receive it; the majority of Texans are overweight, which increases the risk of hospitalization for COVID patients.

Regeneron is most effective on people with COVID-19 who have had symptoms for less than 10 days, but the FDA’s broad guidelines largely leave the decision of who should receive it up to physicians, health officials say.

In an email to staff at Houston Methodist hospital system on Wednesday, Dr. Robert A. Phillips, executive vice president and chief physician executive, said the hospital has scheduled 867 infusions for this week — more than double the highest number for a single week during the last surge.

The Texas Department of State Health Services sent Houston Methodist 17 nurses to help administer the treatment, he said in the email. They arrived last week.

“As you may know, Gov. Abbott is receiving monoclonal antibody treatment after testing positive for COVID-19. This likely will bring more attention to this treatment, which has proven to cut down on hospitalizations,” he wrote.

“We’ve been trying to push these therapies for all Texans, all along,” he said. “They work. I’m a 100% believer in that [treatment], personally.”

Doctors and state leaders point out that the benefits of the infusion last only about three months and that it should not be used as a substitute for vaccines.

“We are continuing to focus on vaccines as the goal,” Kidd said.

“It’s kept people out of the hospital”

The mass infusion center at the Bexar County fairgrounds near San Antonio had closed in March, but reopened on Aug. 10 and in just over a week, more than 500 people showed up with prescriptions for the infusions, county officials said. There are nearly 1,400 people in San Antonio-area hospitals with COVID-19, just under the peak the county saw in January.

Bexar County Judge Nelson Wolff said daily new hospitalization admissions have been holding fairly steady in recent days, instead of climbing exponentially as they have been for the past month, and he says it’s likely that the antibody infusions are contributing to that.

“It is a significant tool,” Wolff said. “What it does is it helps keep people out of the hospital, so I think we’re beginning to see some effect of that.” 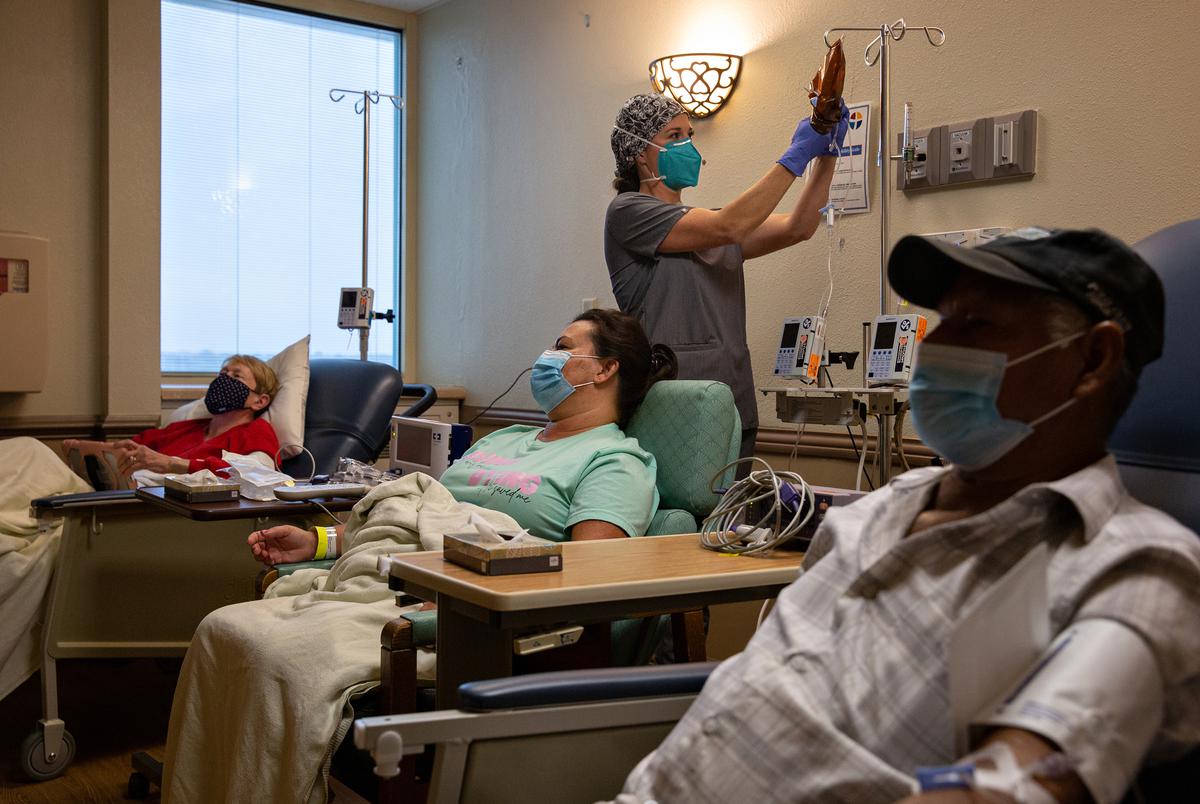 Patients receive COVID-19 antibody infusions at Titus Regional Medical Center in Mount Pleasant on Aug. 19, 2021. The antibody infusion is performed at the earlier stages of infection, which can reduce the the chance of hospitalization by 70%. Credit: Shelby Tauber for The Texas Tribune 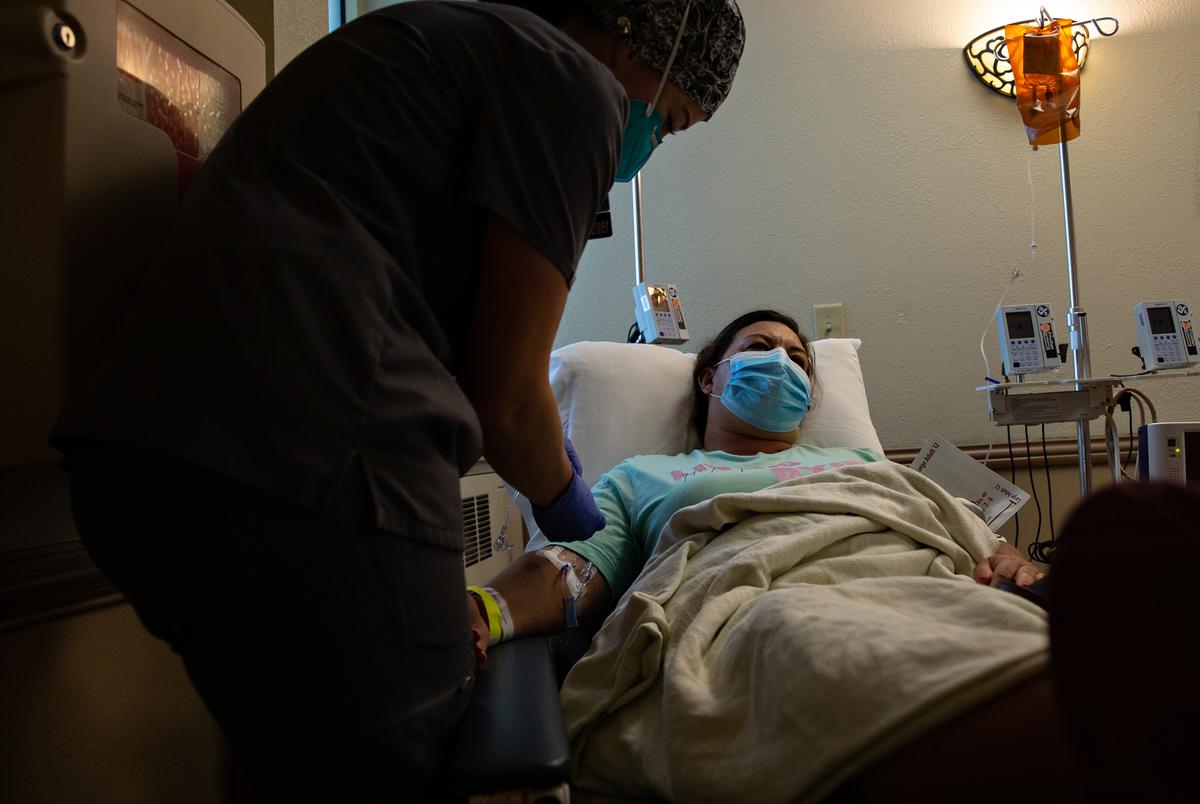 Thurmond oversees all COVID-19-related operations at the hospital, which for weeks has been teetering on the edge of its capacity in a county that’s only 28% vaccinated. The number of daily antibody infusions has more than tripled what they were administering earlier in the year, officials there said. The hospital has done about 160 in the past three weeks.

“It’s kept people out of the hospital, and you know that real estate, especially now, is almost unavailable anywhere,” Thurmond said.

Hardman, the Mount Pleasant patient, experienced symptoms for just a few days before she had a fever over 101 degrees, body aches and other flu symptoms. Within a few hours of the treatment, on Thursday evening, her fever was gone. By Friday, she said she felt “almost normal.”

“It feels like a miracle,” she said. “I’m so very grateful. I’ve told all of my friends, retirees, if you get COVID, go do this.”

Now that the therapy is much more mainstream than it was six months ago, the idea that only the exceptionally needy or the extremely influential can get it isn’t true anymore, Thurmond said.

“The reality is that the rest of us can get it, too,” he said.

Disclosure: The University of Texas at Austin has been a financial supporter of The Texas Tribune, a nonprofit, nonpartisan news organization that is funded in part by donations from members, foundations and corporate sponsors. Financial supporters play no role in the Tribune's journalism. Find a complete list of them here.