2 arrested, 2 others wanted in connection with deadly shooting of 17-year-old in SW Houston

Targeting a statue at A&M and a school song at UT, Texas college students are pushing for a reckoning on race

From its perch in the middle of Texas A&M University’s Academic Plaza, a statue of Lawrence Sullivan Ross serves as a university landmark. For decades, students have placed pennies at its feet for good luck on their exams. High schoolers have stopped by on campus tours to learn about the former Texas governor and university president credited for saving A&M in its early years.

But to a growing number of students, the statue serves as a stinging reminder of systemic racism. Before coming to A&M, Ross served as a Confederate general, fighting to uphold slavery. Late last week, “Sully,” as the statue has long been known to students, was covered with red graffiti and topped with a rainbow wig.

Now, the statue is covered with a tarp.

In the wake of George Floyd’s killing and the resulting backlash, the racial reckoning that has recently swept America is also hitting Texas' institutes of higher education. And major Texas universities like Texas A&M’s flagship campus in College Station and the University of Texas at Austin are struggling to reconcile their outspoken commitments to diversity and inclusion with their histories of racism.

Universities across Texas have released statements condemning inequality and pledging renewed commitments to inclusion. But they have also faced outspoken accusations of racism from students and faculty of color.

Students are increasingly taking issue with the Confederate roots that run deep at many of the state’s universities. At Texas Christian University in Fort Worth, there is a push to remove statues of the school’s founders, who served in the Confederacy during the Civil War. And students from the University of North Texas celebrated when Denton County officials voted to remove a Confederate statue outside the county courthouse.

Black students at all these universities point to the lingering presence of historical figures with ties to the Confederacy or racism, as well as ongoing problems with recruitment and retention of black faculty members and low black student populations. Only 5% of students at UT are black. At A&M, that number is 3%.

A&M’s leadership has thus far resisted efforts to remove the statue, noting that the school was struggling when Ross became president in the 1880s and might not have survived without his leadership. In 2018, A&M’s student newspaper ran a letter to the editor calling for the statue’s removal because of Ross’ ties to the Confederacy. A&M System Chancellor John Sharp responded with a letter of his own, which was making the rounds on social media again last week, defending the statue, calling the original letter “totally wrong” and arguing that the historically black Prairie View A&M University also likely wouldn’t exist without Ross, whom Sul Ross State University in Alpine is named after. 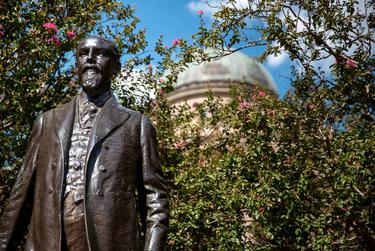 “We are all entitled to our opinion, but we are not entitled to our own wrongheaded facts,” Sharp wrote in 2018. “Lawrence Sullivan Ross will have his statue at Texas A&M forever, not because of obstinance, but because he deserves the honor with a lifetime of service to ALL TEXANS and ALL AGGIES.”

In an email, system spokesman Laylan Copelin said Sharp’s opinion about the statue has not changed.

Rebecca Hankins, a professor and Africana resources curator at A&M’s Cushing Library, where students want the statue to be moved, said the controversy surrounding the statue sums up a broader struggle between students of color and the administration.

“Students have been trying to get the institution to understand the real emotional pain of having a Confederate general on campus, where people go and make prayers to and throw pennies at,” Hankins said. “But overall ... it’s this lack of interest in black lives. Because black lives do not matter at Texas A&M.”

UT-Austin has faced a similar outcry over Confederate memorials on campus. After violent protests in Charlottesville, Virginia, in 2017 and discussions on the value of historical monuments rooted in racist ideals, the university removed three statues of Confederate figures: Robert E. Lee, Albert Sidney Johnston and John Reagan. A statue of Jefferson Davis, the former president of the Confederacy, was removed in 2015. 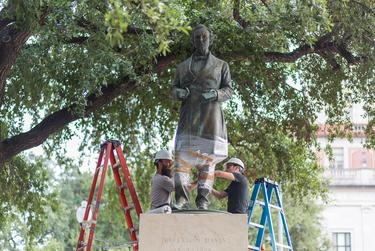 In light of a racist shooting in South Carolina, the University of Texas at Austin decided in 2015 to remove a statue of Confederate President Jefferson Davis. Shelby Knowles for The Texas Tribune

"These events make it clear, now more than ever, that Confederate monuments have become symbols of modern white supremacy and neo-Nazism," then-UT President Greg Fenves said in 2017.

Now students are clamoring for more sweeping changes. More than 100 campus organizations sent a letter to interim President Jay Hartzell this week detailing requests aimed at forcing UT-Austin to “acknowledge its racist history.” They want to rename seven campus buildings currently named for Texans who held racist views, remove a statue of prominent segregationist and former Texas Gov. James Hogg, and discontinue the school song “The Eyes of Texas,” which advocates say has ties to minstrel shows in the time of deep segregation.

Other calls to action include requiring a module on the history of racism at UT, cutting ties with the Austin Police Department and campus police, and adopting inclusive practices in recruiting and selecting UT faculty.

These petitions were followed by an ultimatum from several prominent UT-Austin athletes, who are also asking athletics officials to donate 0.5% of the department's annual earnings to the Black Lives Matter movement and black organizations, establish a permanent black athletic history exhibit in the Athletics Hall of Fame, and rename parts of the football stadium after Julius Whittier, the first black football letterman at UT-Austin. The stadium is named after Darrell K. Royal, a legendary UT coach who was famously late integrating Longhorn football. No prominent calls have been made to remove his name from the stadium.

In a Twitter statement, the athletes said they will refuse to participate in recruiting or donor-related events until their demands are met.

In response, Hartzell said Monday that he would be speaking with students and community members to create a plan to better address racial issues on campus. Hartzell did not address any of the petitions or say whether the administration would be taking action on any individual demands.

“It is important, first, for me to listen closely — and then to work with the entire community to develop a plan to move the university forward,” Hartzell wrote.

For many students of color at both universities, releasing statements and hosting conversations are not enough to remedy what they view as a pervasive problem. A&M students have taken to Twitter with the hashtag #hateisthehiddencorevalue, which has garnered hundreds of user-shared stories of racism or microaggressions on campus.

Vonnie Foster, a postdoctoral student in A&M’s sports management program, shared his own stories with the hashtag, which range from racial slurs to frequent run-ins with the campus police. Foster said he’s been chastised for wearing gear from his undergraduate alma mater, a historically black institution in North Carolina.

Foster said he and other black male students know they must be constantly aware of how threatened some people are by their presence on campus. They try to smile at strangers, dress a certain way and keep their hands outside of their pockets, no matter how cold it is.

“It sucks that we have to buy into respectability politics,” Foster said. “But these interactions where others question my presence or my purpose on campus ... that’s the sad reality we have to face.”

It’s not like this is unique to A&M, Foster said. But it is an experience he didn’t face at his undergraduate school. To Foster, the “culture and mythos” of A&M silences people of color, whether intentionally or not.

And he is disappointed by failed attempts to get university leadership to recognize that some of the calls for action, like the petition to remove the statue of Ross, are attempts to address a “deeply flawed past.”

“The culture here is that no matter what happened in A&M’s history, it is perfect. If you can’t accept it as it is, you don’t deserve to be here and you shouldn’t be here,” Foster said. “But a lot of us want to go to A&M for everything that A&M can offer. We just want it to be better for people that look like us.”

A&M President Michael Young later responded to the stories circulating on social media, offering an apology and saying the campus would launch “bystander intervention training” next fall to combat experiences like Foster’s.

“We see you. We hear you. And, on behalf of the leadership team, I deeply regret that members of the university community have failed you in these circumstances,” Young wrote.

On Monday, Young released a set of further actions the university would be taking, including increasing efforts to recruit and retain students and faculty from underrepresented groups, expanding a cultural center meant for underrepresented students, adding a cultural discourse requirement for first-year students and increasing funding for its Race and Ethnic Studies Institute.

And A&M System regents approved a $100 million scholarship fund Monday that aims in part to boost the school’s diversity. Officials said the system’s 11 campuses should ultimately reflect the demographics of the state, which is no longer overwhelmingly white.

“A step in the right direction”

In a demonstration of the tension on campus, hundreds turned out over the weekend to protest both for and against the statue’s removal. More than 23,000 students have signed a petition to remove the statue of Ross, while 24,000 have signed a counter-petition to keep it. A campus spokeswoman declined to comment on next steps for the statue.

Meanwhile, students have been working for two years to erect a statue of Matthew Gaines, the first black state senator in Texas and an outspoken supporter of public education and voting rights for black Texans after the Civil War. Fundraising has reached $200,000 of a $350,000 goal, and the university is beginning to plan for its installment.

Erica Pauls, the president of the initiative, said the Gaines statue is not meant to be a replacement of Ross’ statue. Her organization is concerned only with paying homage to a key part of A&M’s black history.

“When a prospective student comes on a campus tour and sees that a black man is honored on campus, that gives them hope that they can also make an impact,” said Pauls, a rising senior at A&M. “This statue doesn’t solve all the problems, the microaggressions on our campus. But it’s a step in the right direction.”

According to Pauls, Gaines’ statue will be in a prominent area — easily seen by all visitors and just a stone’s throw away from Ross’.