Published: June 8, 2020, 8:09 pm
Tags:
Politics
A long line leads up to the public memorial service honoring George Floyd at the Fountain of Praise Church in Houston on June 8, 2020. Annie Mulligan for The Texas Tribune

HOUSTON — Bennie Jenkins had no relation to George Floyd, but as a fellow graduate of Jack Yates High School in Houston, she still considers him family.

Ryan Whipple once lived a block from where Floyd died in Minneapolis. One time, he said, Floyd gave him $10 for no reason.

“He said, ‘Here, be blessed,’” recalled Whipple, who now lives in Floyd’s old hometown of Houston. “I paid it forward and blessed someone else.”

Chad Thomas didn’t know Floyd at all. But he and three family members drove from Austin to Houston to pay their respects. They bought several T-shirts all donning the same message: “Nobody died when Kaepernick took a knee.” On the back read Floyd’s last words, “I can’t breathe.”

“It’s important we’re here in the moment and do our part as black citizens to commemorate a member of our community who has fallen,” said Thomas, 19, who wore a gray shirt with the phrase #IRunWithMaud, a phrase memorializing the fatal shooting of Ahmaud Arbery while he was jogging in Georgia.

Both somber and defiant, mourners from across the nation gathered in Houston for a public viewing to celebrate Floyd, a friend, father and martyr to many in attendance, but also a victim of police brutality and racial injustice.

There was anger and anguish among the thousands who gathered and cries of “Black Lives Matter!” stirred by Floyd’s death in May. Strangers stood shoulder-to-shoulder despite a global health pandemic that has hit black communities particularly hard. Mourners were restless and anxious. Emotional, too.

“It’s amazing so many people stand for justice and peace,” Jenkins said. “When I pass through the church, I’m going to say a prayer for unity, for the family, for America and for the family of all of Jack Yates’ alumni.”

Attendees gathered at the FountainLife Center — some as early as 9 or 10 a.m. — and waited for a shuttle in a line that stretched in a semi-circle into a nearby field. After they made it on a bus and rode to the nearby Fountain of Praise Church, they then had to wait in another line to see Floyd’s open casket. Buses taking passengers to each destination had quotes from icons like Harriet Tubman and Mickey Leland. Most people wore masks out of concern for the coronavirus.

Annie Mulligan for The Texas Tribune

The death of Floyd, which came in Minneapolis after a white police officer named Derek Chauvin wedged his knee into Floyd’s neck for nearly nine minutes, sparked protests across the world. It served as a reminder to many black Americans that the racism they’ve been fighting for centuries is far from gone. In interviews Monday, more than a dozen attendees not only demanded justice for Floyd, but called for systemic change in power that would prevent other black people from dying unjustly.

“I’m black. That could’ve been me in there,” said 24-year-old Jarvis Ward, who, along with nearly a dozen of his friends, drove to Houston from Birmingham, Alabama.

The six-hour viewing served as another call to action. It also served as a reminder of the need to come together as a community to make any wishes of change come true.

Dozens of attendees wore “unity ribbons” and flowers. Vendors sold shirts with phrases like, “Melanin Made” and masks that read, “I can’t breathe.” Employees of a neighboring Home Depot — wearing their signature orange smocks and masks — handed out cold water bottles.

“We want his name to be remembered,” one peddler said. One of the members of Ward’s group, Carlos Chaverst, went live on social media and encouraged people to send him money so he could buy them a shirt in their desired color and size. 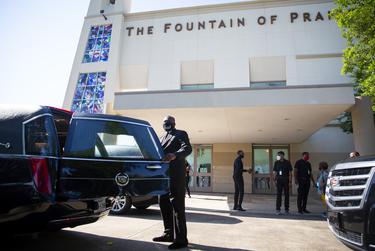 A man closes the back door of a hearse in preparation for George Floyd's public memorial service at the Fountain of Praise Church in Houston. Annie Mulligan for The Texas Tribune

The scene outside of the church was punctuated by sadness and frustration — but also optimism. While waiting to go inside for the viewing, several people sang an a cappella rendition of “This Little Light of Mine.” People sat on the grass outside, some in tears, swallowing what they had just seen inside, but with a renewed fire in their bellies for change.

“To see his body now, it makes you want to do something,” said Cedric Daniels. He paused and looked away before adding, “It’s surreal to see him lying there and looking at his neck while knowing how he died.”

Toward the end of the evening, several of Floyd’s family members spoke. They'll remember him, they said, as a man with a big heart and smile, a former star athlete and someone whom they called Perry but who was known to people in Houston’s Third Ward as “Big Floyd.”

One brother, Philonise, called him “a role model” and a “gentle giant.” A younger brother, Rodney, said Floyd “gave the best advice on anything.”

“I’ll tell you what: If he was told he would have to sacrifice his life to bring the world together, knowing him I knew he would’ve done it,” Rodney Floyd said. 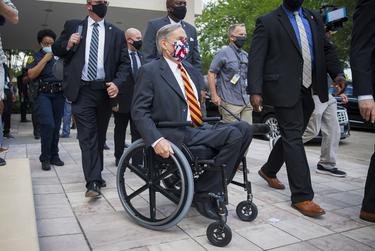 Gov. Greg Abbott exits the George Floyd public memorial service at the Fountain of Praise Church in Houston on June 8, 2020. Annie Mulligan for The Texas Tribune

Aside from a slate of marches and protests, local and state officials have called for swift action after Floyd’s death. In Dallas, residents are asking for the city council to cut its police department’s budget and stop using tear gas on protestors; farther south in Austin, activists are demanding the city’s police chief be fired and that the department’s budget be reallocated to black and brown communities.

Outside the viewing Monday, Gov. Greg Abbott raised the idea of the “George Floyd Act” to “prevent police brutality like this from happening in the future in Texas.”

For several in attendance on Monday, change at the municipal and state levels would be a good start, but wouldn’t bring the end to a deeply ingrained racism that has plagued the state and nation since their beginnings.

Micahl Wyckoff, who brought his young kids to Monday’s viewing, said he’s in favor of dismantling and defunding police departments altogether. One of the biggest issues, he noted, about the way law enforcement is currently organized is that “it makes more to be a hairstylist in America than it does to be a cop.”

“We’re tired of this crap as much as anybody else,” said Wyckoff, who is white. “For decades, there’s been protests and allies, but for a lot of people — especially white people — this is the first time they’ve really accepted that this is an issue.”

Wyckoff, whose 3-year-old son Sterling drew his own crayoned sign reading “Black Lives Matter” that he occasionally held upside down, also said it was important for his kids to see “how far people doing passionate things can go.”

Tiffani Betts, who drove down to Houston from Dallas on Saturday, said reforms mean nothing if there’s not a way to dismantle institutional racism. Police, she said, “feel like they can get away with everything and do anything. To just freely beat us and kill us? That’s crazy.”

Betts said the events of the past several weeks reminded her of “Bloody Sunday” in Alabama, when there was a brutal attack on civil rights marchers in 1965. 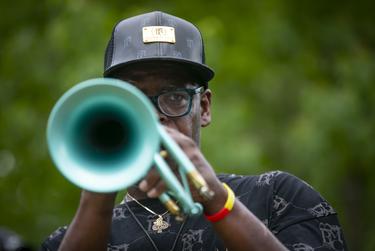 Philonise Floyd said he was heartened that his brother’s death has moved people to come together, mourn and fight for a better tomorrow.

“It just hurts a lot being here and just talking,” he said, crying. “It’s pain. I thank y’all so much for coming out to support us. We will get justice. We will get it. We will not let this door close.”

The viewing in Houston preceded a funeral Tuesday only open to invited guests and family members. Joe Biden, the Democratic nominee for president, is slated to record a video message for tomorrow’s services, according to The New York Times.

“We’ve been mourning in our own homes, crying and watching videos. We wanted to be here,” said Robin Norby of Sugar Land.

“To see him lying there was very emotional,” Norby, who is white, said of the viewing. “To be honest, I got down on my knees and asked for forgiveness from the Lord.”

“We wanted to let his family know we’re here in solidarity,” added Norby’s sister, Tammy Downey as she choked back tears. “We see your pain and we feel your pain.”

Monday’s viewing came a day after nine members of the Minneapolis City Council — a veto-proof majority — pledged to dismantle the city’s police department and create a new system of public safety. Chauvin, who has since been charged with second-degree murder, had his bail set at $1.25 million during a Monday hearing.

Floyd’s death, Betts said, is being felt “nationwide and has affected people all over the world. Thank God. This is going to get some type of change. I just know it.”