Stevani Flahaut's college experience is not one of living on a picturesque campus, rubbing elbows with fellow students fresh out of high school.

A 27-year-old attending Austin Community College, the aspiring restaurateur weaves together a full-time course load and two jobs. While community colleges are sometimes perceived as the stepchildren of higher education, to nearly 700,000 Texans like Flahaut, they are hard-fought professional stepping stones, an avenue for the aspirations of working parents or older students.

When the coronavirus pandemic hit, it wasn’t just these students’ education that was upended, but often their entire lives.

“Our students are not your average college students,” said Jan McCauley, a political science professor at Tyler Junior College. “Most of them are working. Many of them are parents. Now, they’re at home and having to teach kids online.”

Community college students often need reliable child care and hold regular jobs. As the novel coronavirus spread, these schools didn’t just have to figure out how to offer virtual classes. They scrambled to support students like Flahaut when the threads of their lives started to fray.

About a quarter of students at Texas’ 50 community colleges are 30 or older. And 76% take classes part time, often to allow for work and other responsibilities, according to the Texas Higher Education Coordinating Board.

Many community colleges connect students with day care centers or food pantries, meeting needs beyond education, said Lynn Pasquerella, president of the Association of American Colleges and Universities. Across the nation, 42% of students who are parents enroll in community college, according to the Institute for Women’s Policy Research.

McCauley said the pandemic pushed many of her students to one of two extremes: either scrambling because they lost jobs, or working more hours than ever in health care or grocery stores. She accommodated her students’ changing schedules by recording her lectures and keeping tabs on her emails.

Flahaut lost nearly all income from her two jobs when the the hospitality industry came to a standstill. But she still had rent to pay. 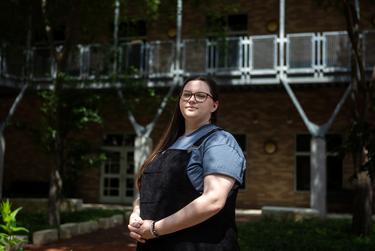 “When the president sent out the email saying I won’t be affected and can continue to do classes online, I felt relieved,” Flahaut said. “It made me feel safe.”

Online classes pushed Joshua Ledesma to the brink. The electrical engineering student at Amarillo College said he tried to drop his courses and wait for the return of normalcy — going up to his professors after class and studying in the computer lab.

But since Ledesma, 23, of Dimmitt, had already paid for his courses, he struggled through the end of the semester, tapping into virtual tutoring, spending 10 minutes just to send the tutor work he needed help with.

“I don’t have the luxury of being able to focus in my house,” Ledesma said. “It’s been really terrible for me.”

Pasquerella said the pandemic has had a “disparately negative effect” on community college students. And some of the life-sustaining resources these schools offer might be less readily available.

Alvin Community College typically partners with the Houston Food Bank. Eligible students receive up to 60 pounds of produce, meat and other food every two weeks, said Christal Albrecht, the school’s president. But that partnership has been suspended as Texans flood food banks.

“We had our own pantry of dry goods,” Albrecht said. “We did two food distributions until we were out of food. We’re referring them to other resources they could go to access food.”

McCauley’s students often drove to campus just to access the internet from Wi-Fi hot spots in parking lots, she said. Even in urban areas like Austin and El Paso, not everyone has access to the internet, and community college service areas often reach into rural communities.

Since virtual education demands technology, Austin Community College rushed to order iPads and laptops — 1,000 each — to get them in students’ hands, Rhodes said.

Across the state at El Paso Community College, students checked out laptops from the school. When that supply ran dry, the school ordered 150 more laptops for faculty and students, said William Serrata, the school’s president.

Ledesma, the Amarillo Community College student, planned to transfer to West Texas A&M University this fall, though those plans are in flux, he said. If schools remain online for the fall semester, Ledesma said he’s considering putting his schooling on hold until it returns to in-person instruction.

But many community college presidents are encouraging students to prioritize their education during this time. Austin Community College isn’t raising tuition in hopes that students won’t drop out, Rhodes said.

Disclosure: The Austin Community College District, Amarillo College, El Paso Community College and West Texas A&M University have been financial supporters of The Texas Tribune, a nonprofit, nonpartisan news organization that is funded in part by donations from members, foundations and corporate sponsors. Financial supporters play no role in the Tribune’s journalism. Find a complete list of them here.